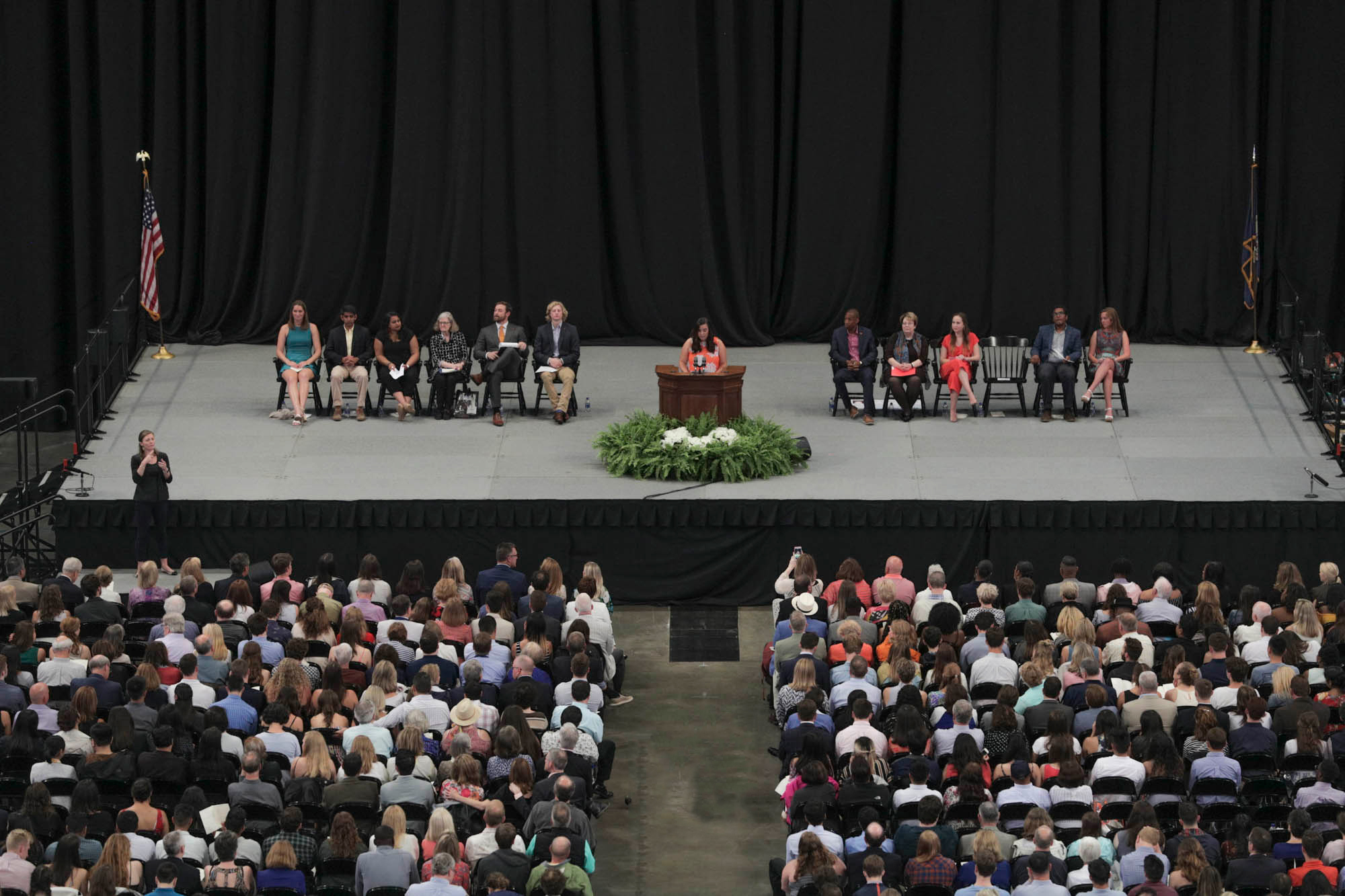 Among them were three winners of Algernon Sydney Sullivan Awards, presented annually at dozens of universities and colleges in the southern United States to recipients who have demonstrated notable character, integrity and service. The awards are presented by the Algernon Sydney Sullivan Foundation, which is named for a New York lawyer, businessman and philanthropist. 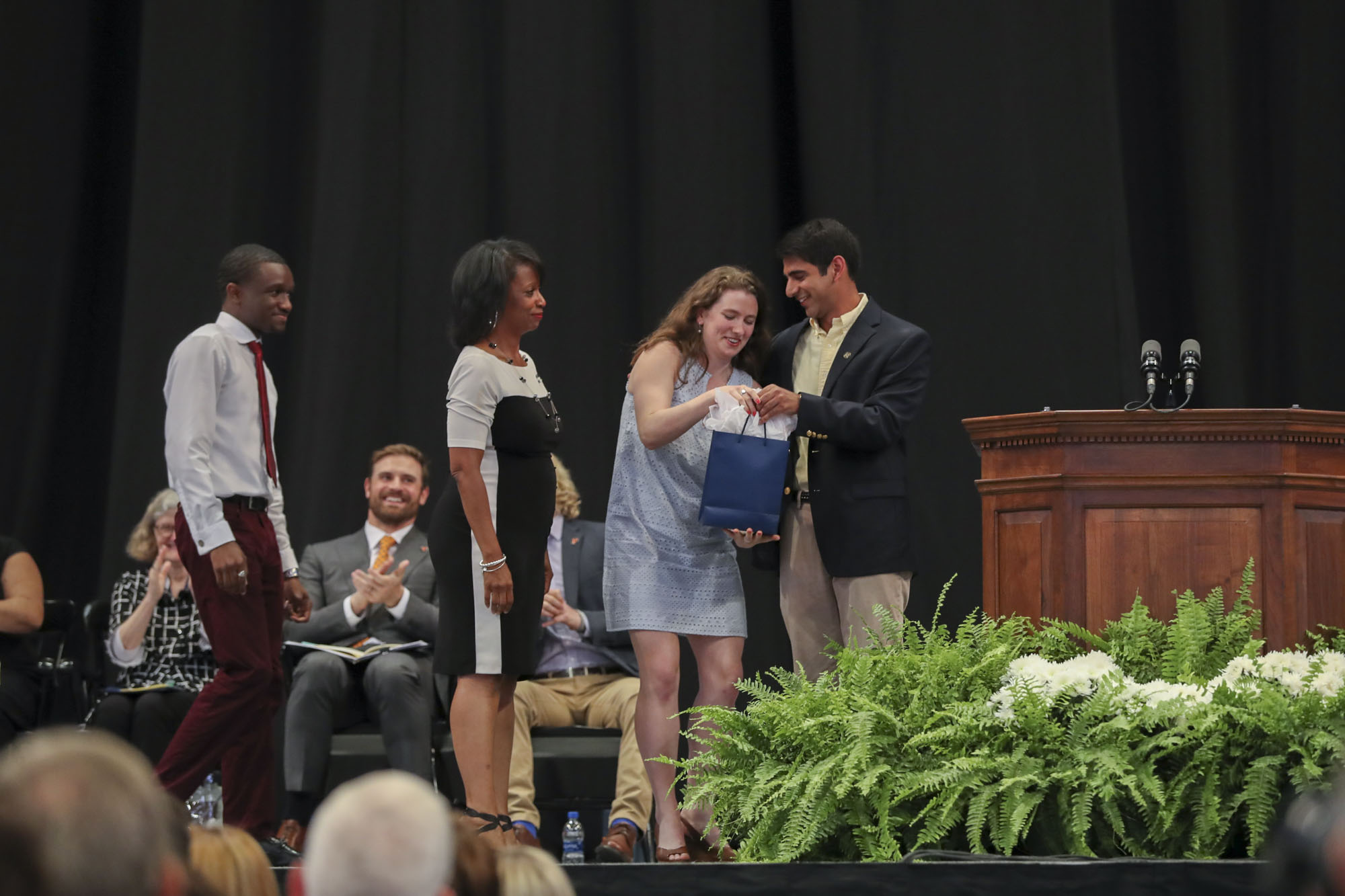 Curtin was lauded by award committee member Rohan Kumar for her depth of character and for being motivated by the needs of others, from baking cookies for a friend undergoing a bad week to serving as a leader in the Best Buddies organization, which she has done since high school. She also has been involved with the University’s Sustained Dialogue organization, Green Dot bystander training and other community engagement channels.

Curtin, who lived on the Lawn, “derives energy and inspiration from creating experiences that build a network of care and support that makes all feel welcome,” Kumar said.

Ambrose, described as a “quiet and humble leader” and possessing “radical humility,” served as co-chair of Housing and Residence Life this year, creating welcoming communities across Grounds. He was also president of the Black Male Initiative and served as a mentor and guide in the black community and other communities on Grounds.

“A true servant-leader, Tyler is motivated by the success of those around him and a desire to leave the University community better than he found it,” Kumar said.

Enoch, a University employee for nearly two decades, serves as an assistant dean of students and director of orientation and new student programs. She is known as a welcoming presence for new students and families. She created the first faculty Sustained Dialogue group; was a member of a project team that created “HOOS In,” a program that provides education about diversity and inclusion for faculty and staff; and helped develop a course in multicultural fluency. She also provides a place of welcome for African-American women joining the University as employees.

“Tab has a way of approaching everyone and making them feel cared for, important and included,” Kumar said.

The Seven Society’s Louis A. Onesty Memorial Scholar-Athlete Awards went to Haley Fauntleroy, a graduate of the Frank Batten School of Leadership and Public Policy and Cavalier volleyball player, and Lauren Moses, an American studies graduate and Cavalier basketball player. 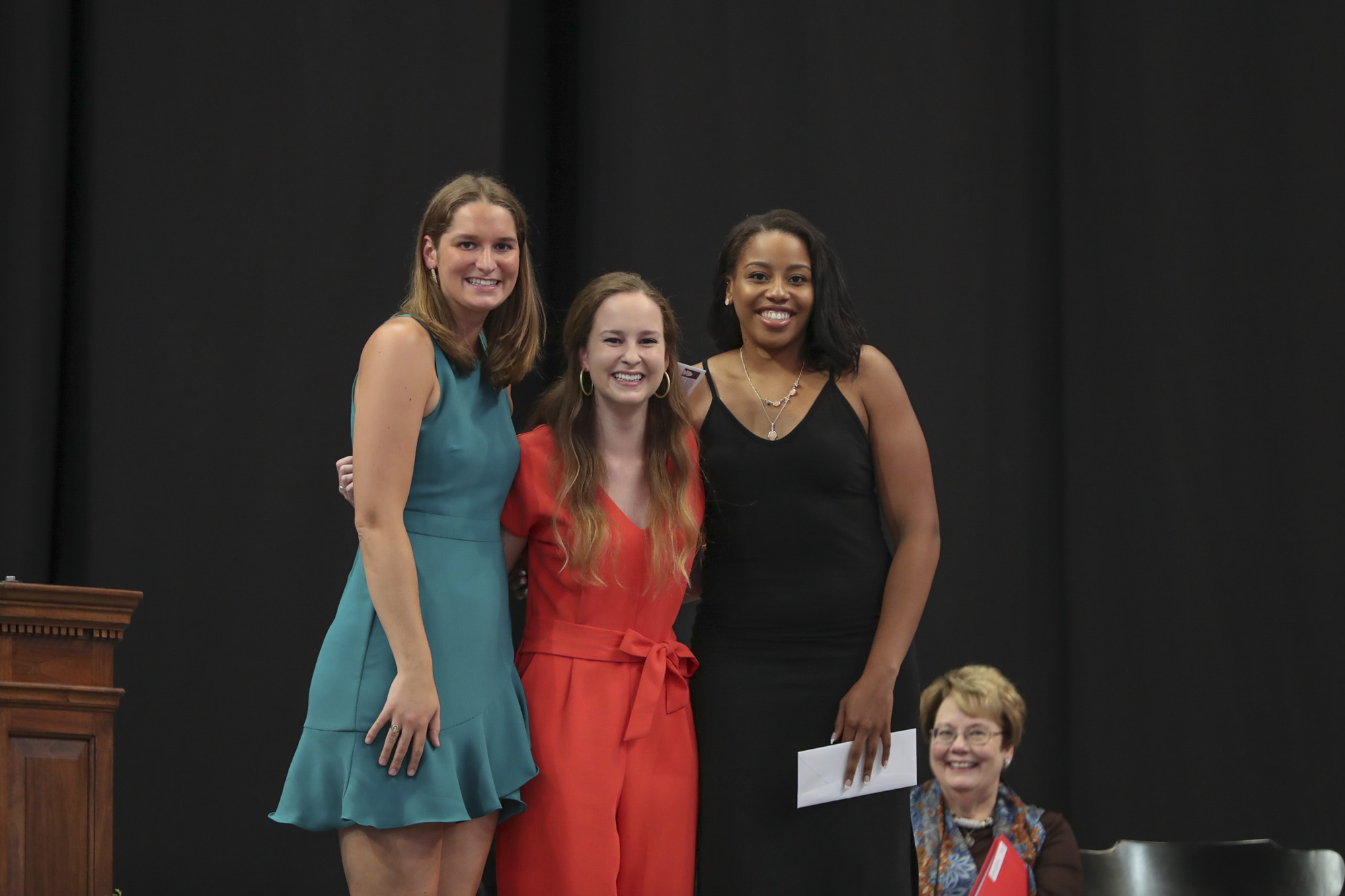 Moses scored 1,047 points in 129 games during her college career, making her the 34th women’s basketball player to be inducted into UVA’s 1,000-point club. Her leadership as a captain helped bring her team to the NCAA Tournament this year for the first time since 2010. Twice during her athletic career, Moses made the All-ACC Academic Team. Beyond athletics, Moses mentored young students at Zion Union Baptist Church and worked as a sports journalist for WUVA.

Her former coach, Joanne Boyle, has said that Moses “exemplifies what it means to be selfless, hard-working, humble, passionate and caring.”

A dominant presence on the court, volleyball team captain Fauntleroy was a strong and positive presence off the court as well, and is an ACC Scholar-Athlete. She served as an orientation leader, a council member of UVA’s Student-Athlete Mentor program, an executive on the Student-Athlete Advisory Committee, a Class of 2018 Trustee and a member of the Kappa Delta Sorority. She also has been an advocate for survivors of sexual assault and interpersonal violence through her involvement with the programs Take Back the Night, One Love and Green Dot.

Her coach, Aaron Smith, described Fauntleroy as a “constant motivator” for her team, and “loyal, hard-working and passionate.”

The Seven Society also presented its James Earle Sargeant Award, which is given each year to a student organization that makes major contributions to the University community.

The year’s award went to the Tuff Armenia Project, a group that seeks to provide housing relief to Armenians who are still affected by a devastating 1988 earthquake. After more than a quarter-century, some survivors continue to live in temporary housing. 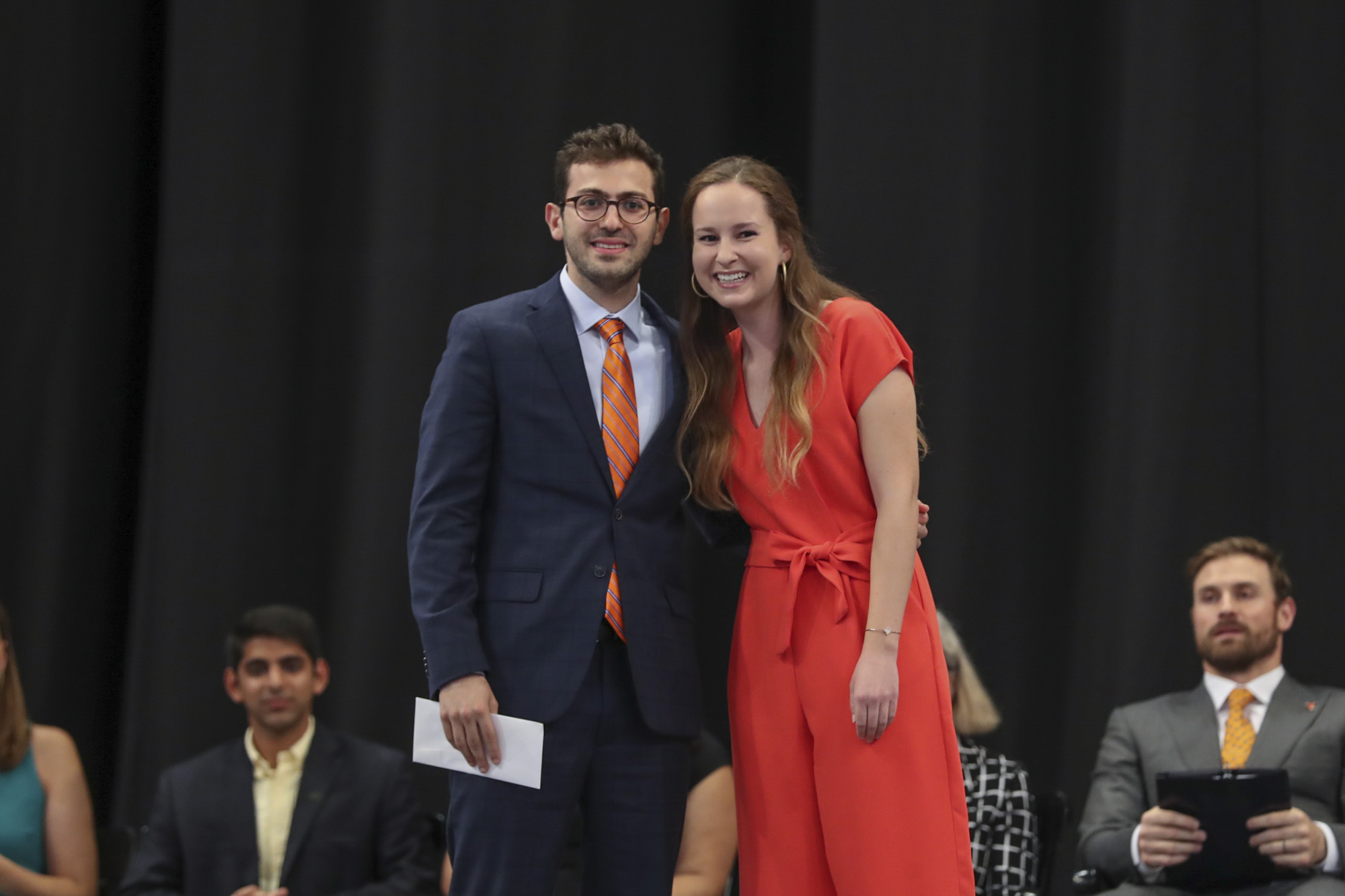 The Seven Society awarded its James Earle Sargeant Award to Tuff Armenia Project, which was accepted by its founder, graduating engineering student Leon Yacoubian. Kirby Evett, trustee of the Class of 2018, presented the award.

Tuff Armenia is led by students in the School of Engineering and Applied Science who research, design and build new structures for families in the populous Armenian city of Gyumri. Partners include students in the School of Architecture and in the Global Development Studies program. The organization provides students an opportunity to apply their classroom learning to a real issue in service to others.

Graduating engineering student Leon Yacoubian, founder of Tuff Armenia, accepted the award for the group, which was presented by Kirby Evett, trustee of the Class of 2018.

The Society of the Purple Shadows gave its Gordon F. Rainey Jr. Award for Vigilance to the Student Experience to Allen W. Groves, associate vice president and University dean of students. Groves, a 1990 UVA Law School graduate, was cited for leadership “instrumental in helping students achieve remarkable outcomes and also recover from times of hardship.” 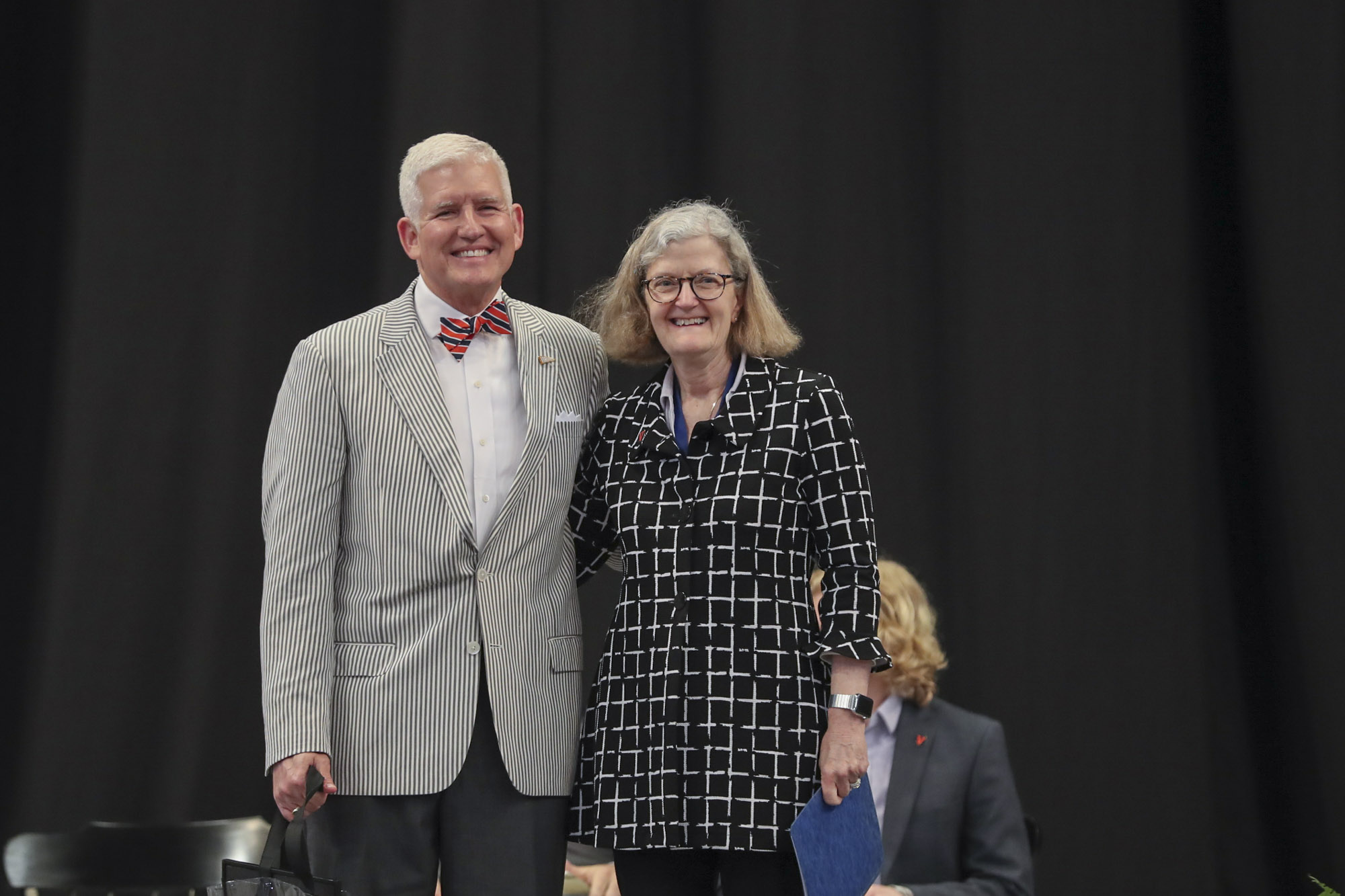 He was recognized for his long work hours, dedication to students, and particularly for standing with students and even being injured last Aug. 11 during violent demonstrations on Grounds by outside groups. The society said Groves’ actions “set the standard for all students, faculty and administrators who walk the colonnades.”

The Class of 2018, represented by trustee Holly Stevens, presented the annual community service and cultural fluency awards, and a special “Miss Kathy Award.”

Education graduate Paola Sanchez Valdez, an advocate for the rights of LatinX and undocumented students, received the Class Award for Community Service. She is the founder of two student organizations, Political Latinxs United for Movement and Action in Society, and DREAMers, and has worked with University administrators and others on Grounds to protect undocumented students. She also has served as a Big Sister and mentoring group facilitator in the Young Women Leaders Program at a Charlottesville middle school and established a sister site in her hometown of Quito, Ecuador. 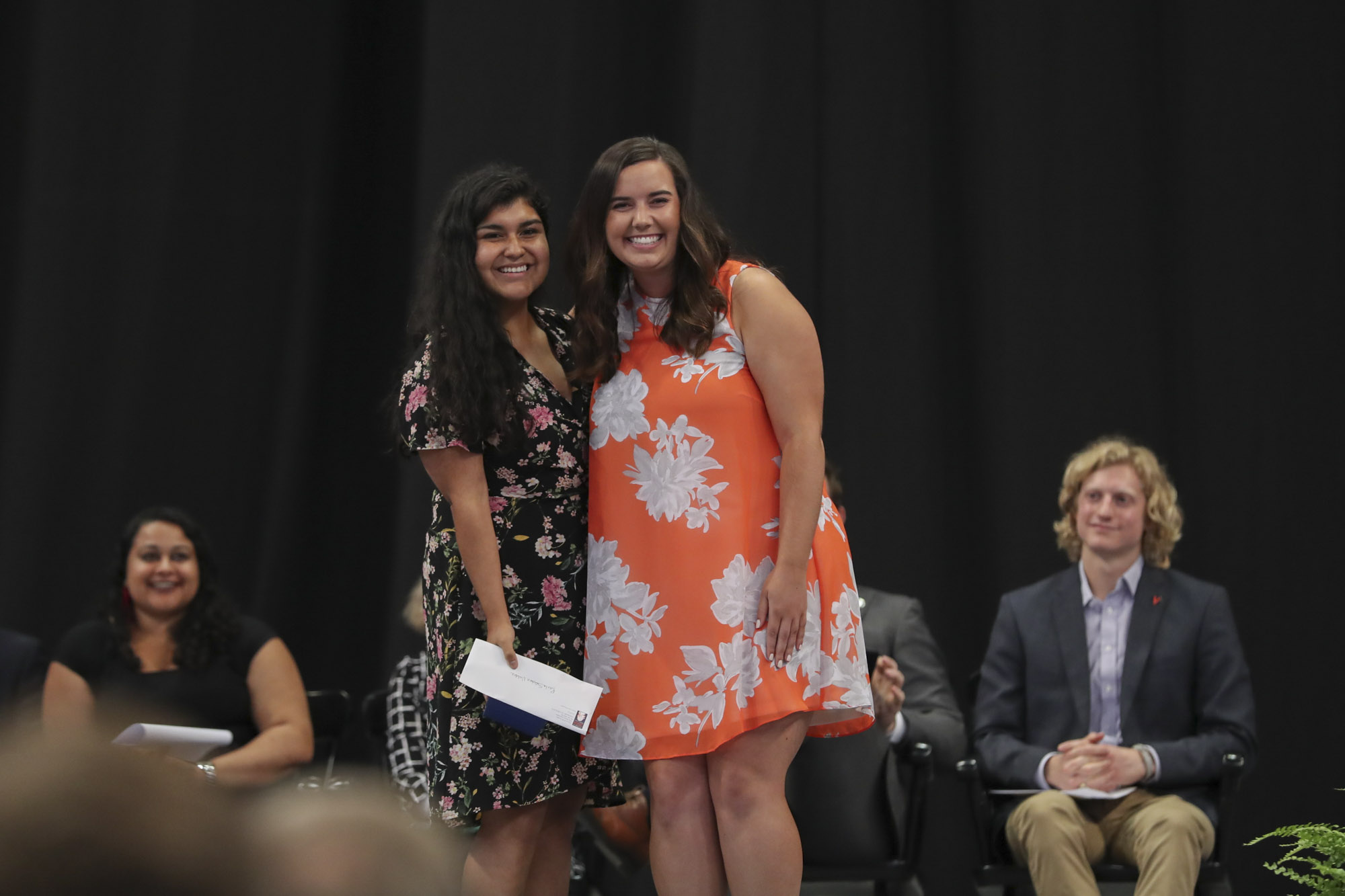 “Paola’s leadership strength lies not in her desire for power or influence, but in her passion to help the people in her community,” Stevens said.

The Cultural Fluency Award, which recognizes a graduating student who demonstrates understanding and appreciation for cultural and intellectual diversity, went to Nivedha Kannapadi, a neuroscience and English double-major. Kannapadi has worked with the Human Rights Commission as part of Student Council, has coordinated several community dialogues involving diversity, and has served as chapter president of “Girl Up,” a campaign of the United Nations Foundation that inspires students to address and engage in women’s issues globally. She has earned research grants to study public health, addressing inequities in reproductive health care in India. 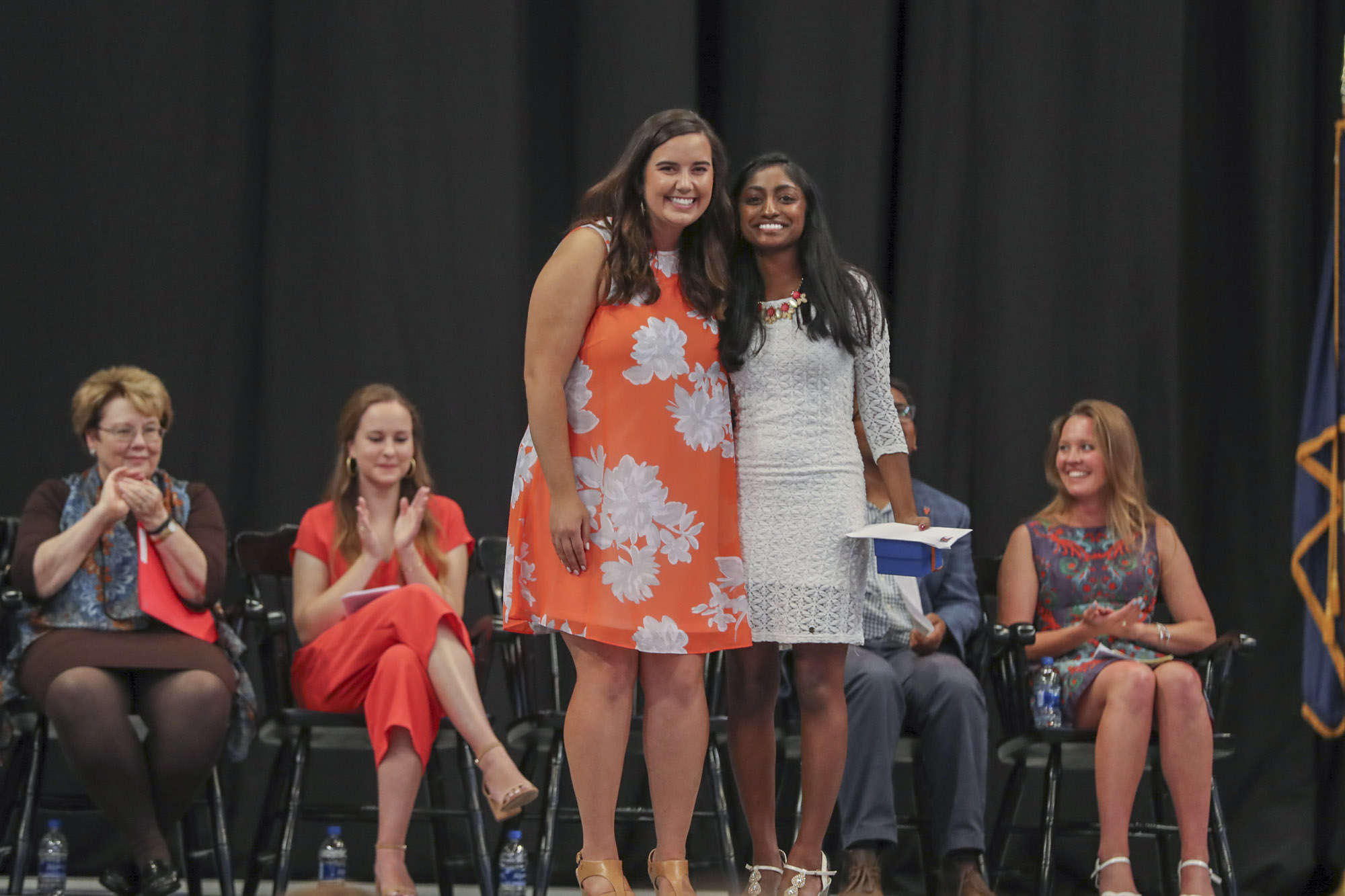 The UN Foundation’s Universal Access Project named Kannapadi a “Why We Care Champion.” She also has been invited to the Clinton Global Initiative University “Commitments to Action” program.

The “Miss Kathy” Award, given for kindness, positivity and good nature, in honor of Newcomb Dining Hall-Aramark employee Kathy McGruder, went to Sarah Brotman, a public policy and leadership graduate who is known as an “intentional listener” and someone who selflessly shows compassion for others while encouraging them in their endeavors. Brotman has participated in community service activities, served as philanthropy chair of her fraternity, volunteered to aid in caring for Charlottesville’s homeless community, and worked on projects addressing homelessness. 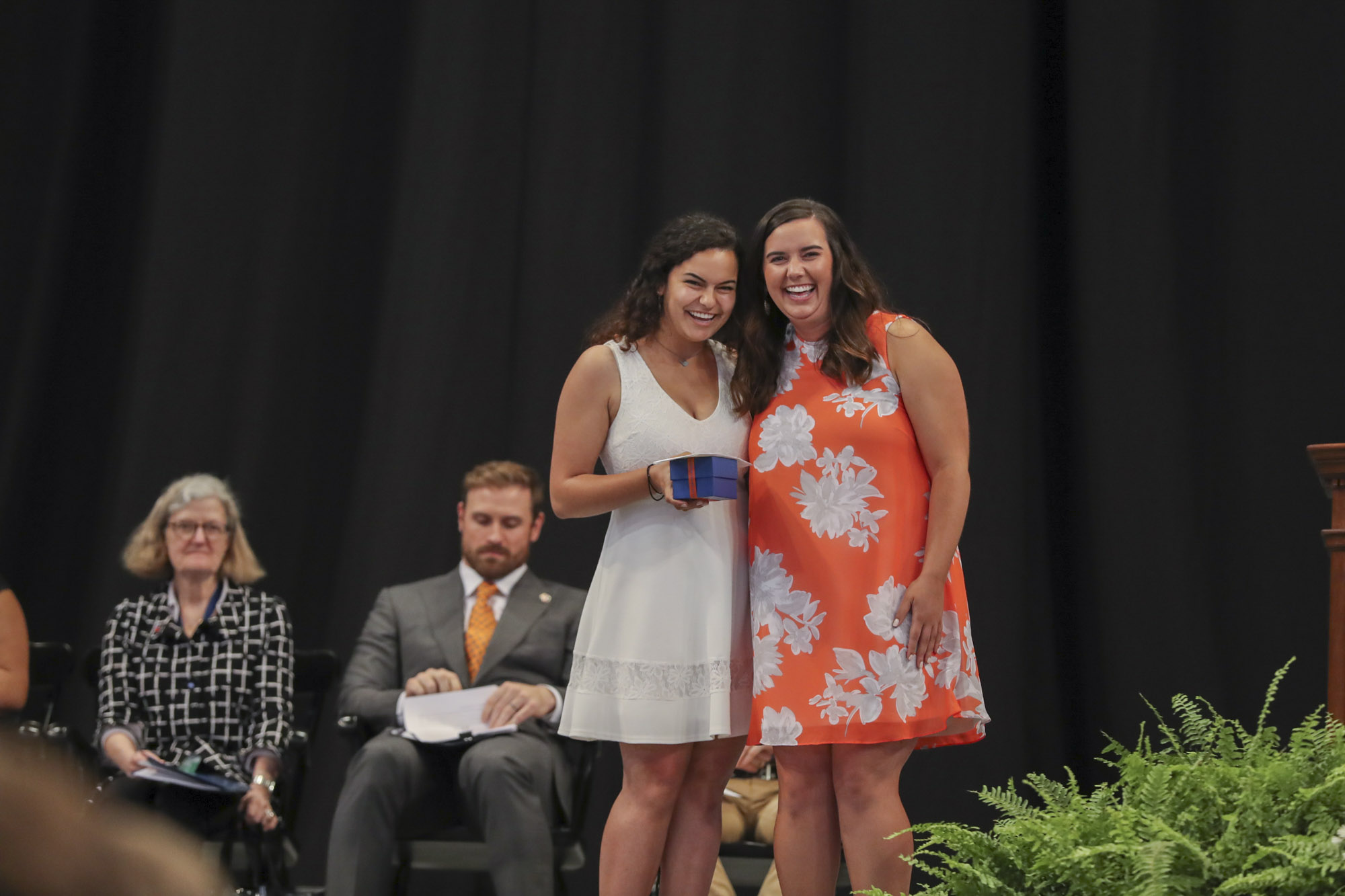 The Miss Kathy Award, given for kindness, positivity and good nature, went to Sarah Brotman, a public policy and leadership graduate.

“She sees the best in everyone and makes sure you understand how much she believes in you,” a fellow student remarked for her citation.

How a Single Email Changed a Life END_OF_DOCUMENT_TOKEN_TO_BE_REPLACED

Fall Is in the Air on Grounds END_OF_DOCUMENT_TOKEN_TO_BE_REPLACED

At UVA, There Is a Club for Everyone END_OF_DOCUMENT_TOKEN_TO_BE_REPLACED