Commitment to Service at the Core of UVA Basketball, Past and Present 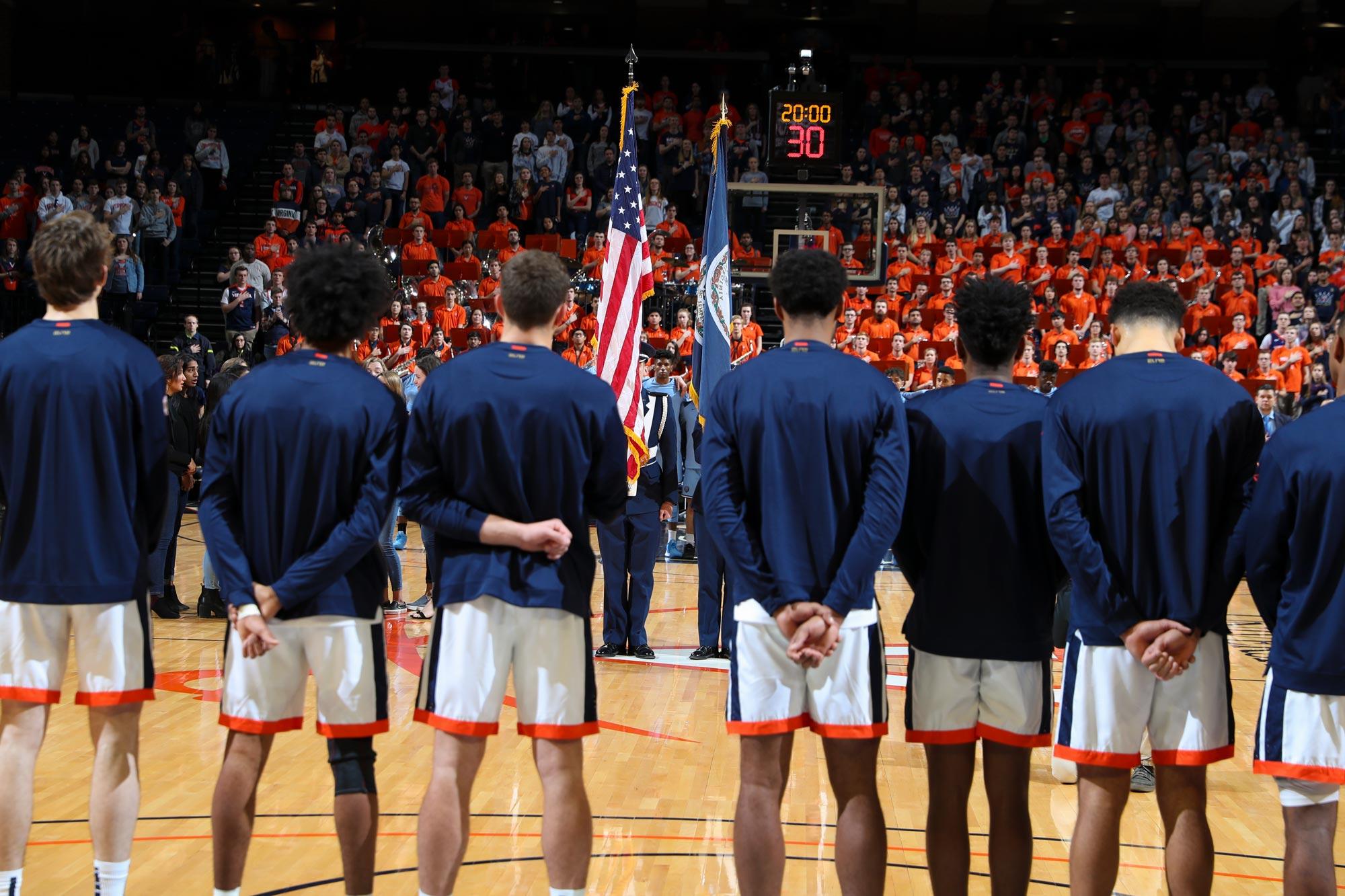 Servanthood, one of the five pillars upon which University of Virginia men’s basketball coach Tony Bennett has built his program, revolves around the idea of serving and sacrificing for teammates, however and whenever possible.

But how does Bennett know if the players he’s bringing in are truly willing to do this?

One way is by taking a close look at their activities off the court before they arrive on Grounds. Are players serving their own communities?

In his 10-plus years at the helm, Bennett has found players who have been perfect fits for not only his program, but for the UVA and Charlottesville communities. In many cases, the players have continued to make an impact on the world through service in amazing and innovative ways well after they leave Grounds.

In December, Bennett himself came aboard. “Teaming up with Malcolm again was a no-brainer; he is one of the most generous, thoughtful leaders I know, and to join with him in serving those in need is very meaningful,” he said.

“I’m excited to work with the entire Hoops2o roster and bring this mission to NCAA basketball. Just as NBA fans have rallied around the cause, I know our UVA and collegiate fans will join me in making a big impact for individuals and communities through the gift of clean water.”

Who are the current members of the UVA basketball family who will be trying to positively affect the world?

UVA Today caught up with several members of this year’s team. 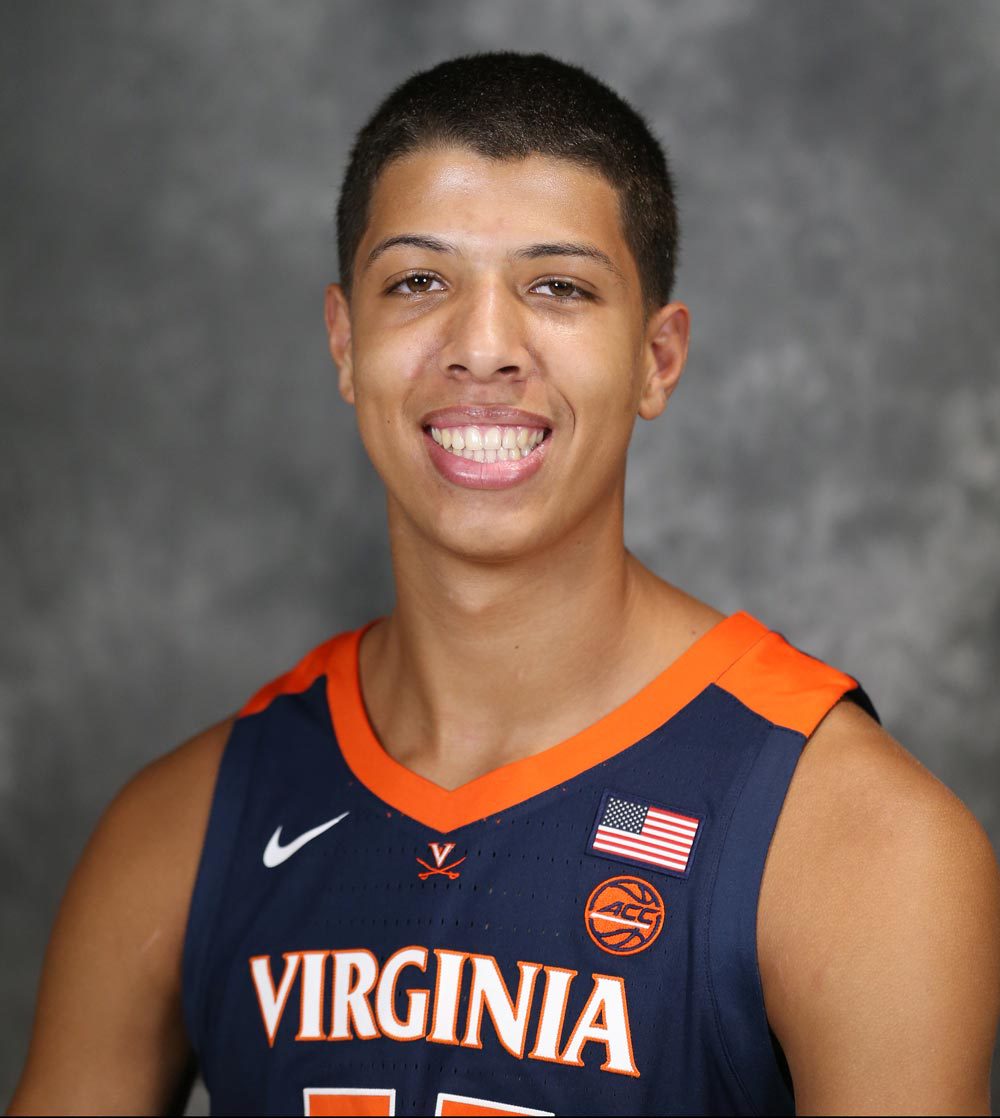 The 6-foot-11 freshman from Raleigh, North Carolina, who is redshirting this season, said service is a part of his DNA.

“I enjoy doing it a lot,” Shedrick said. “In high school, I worked with special needs kids a lot. Over fall break, I got to go back and visit them, which was really fun. I really enjoy working with them and just doing any community service when I can.

“Just knowing that you did something to help others is really important. I think it’s a really good thing.”

Shedrick said having mentors at his high school influenced him to do what he could for others.

“I’ve looked up to a few of my high school teachers, who have really helped me a lot,” he said. “Miss Kimberly Kreider and Miss Melissa Richer back at Holly Springs High – they were two of my biggest mentors.” 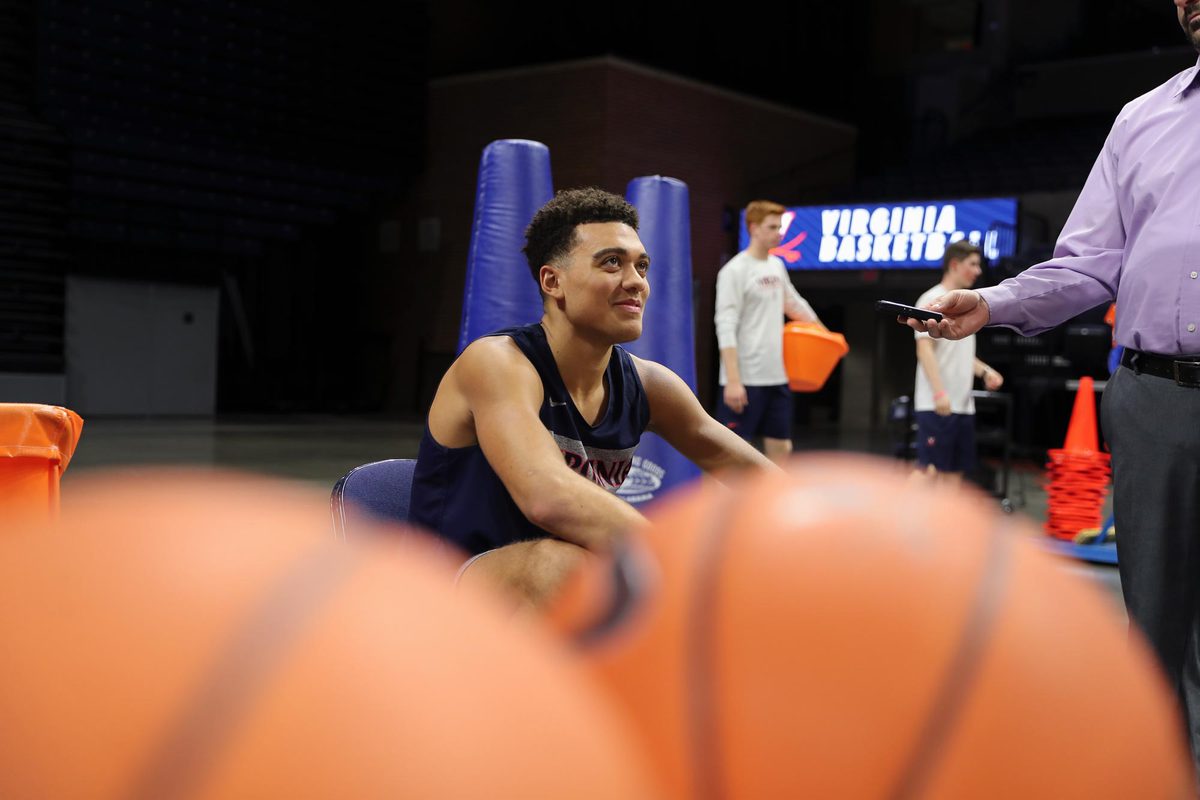 The freshman forward from Cary, North Carolina, who has played in 11 of 13 games this season, volunteered for Miracle League, an organization that gives children with special needs a chance to play baseball.

“I like community service and serving people; that was something that attracted me to UVA,” McKoy said. “The pillar of servanthood just stuck out to me. I think serving people and helping people is always going to be one of the most important things.”

“We learned how to become better leaders by interacting with other people,” he said. “We went to the middle school and talked about what it meant to be a good high school student and a leader in the classroom, athletically, all that stuff.”

McKoy’s selfless, team-first attitude was on display in the John Paul Jones practice gym over the weekend when he spoke to a high school team that was visiting from Northern Virginia.

As powerful a message that could have been delivered to us on our trip to Charlottesville. And, by a college freshman? Incredible and humble. Thank you @justintmckoy and @UVAMensHoops for an experience our HS coaches and players will never forget! salute. Trust the process! pic.twitter.com/tljtXV4g7q 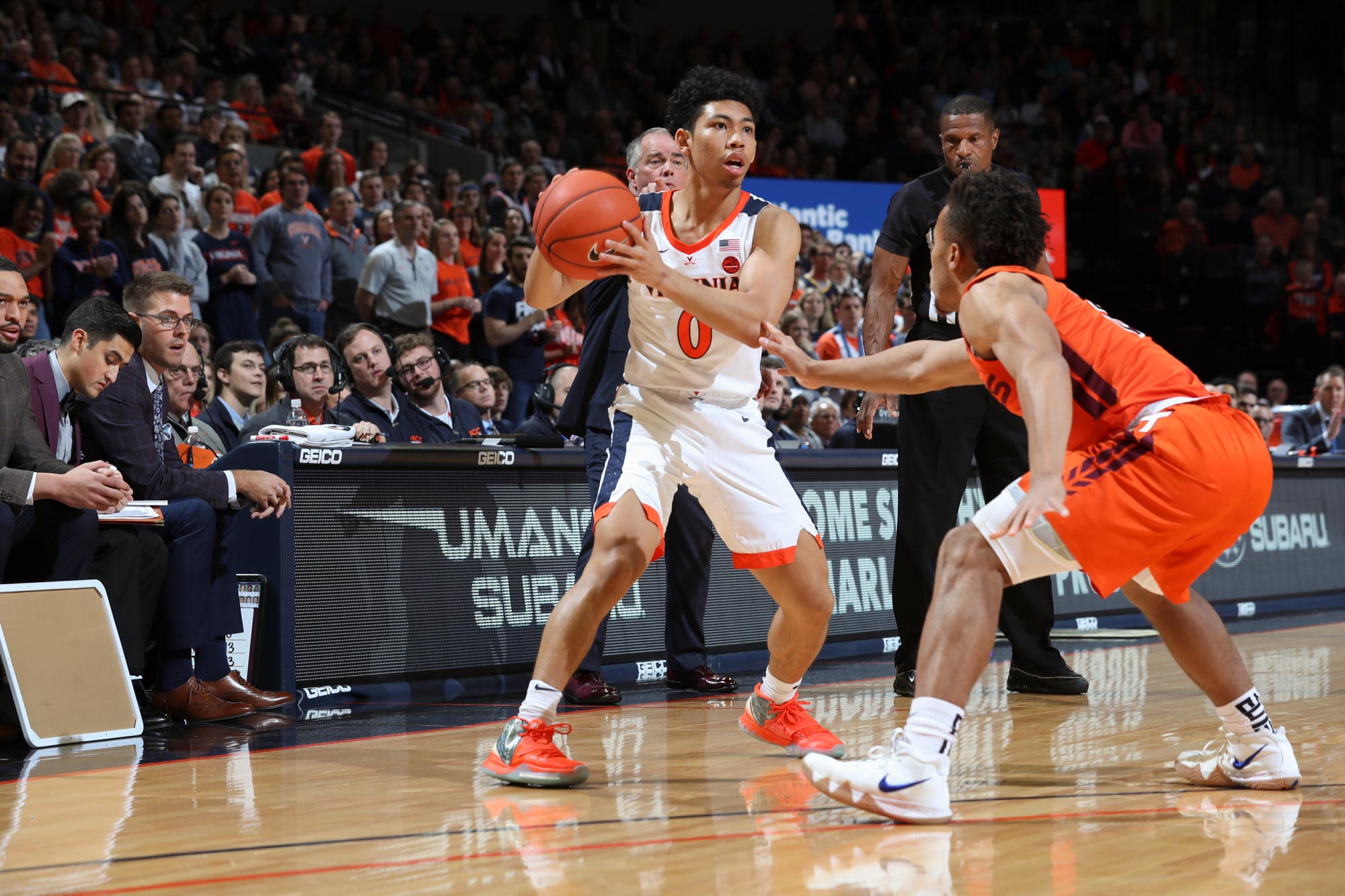 While at Taft Charter School in Woodland Hills, California, the Hoos’ second-year point guard took part in several service-related activities, including an African American mentorship program and a rescue mission in which his team made sandwiches and care packages for people living in a homeless shelter.

“We just tried to give back to the community,” Clark said. “Even if you think you’re not doing well, there’s always somebody who’s doing worse than you are and you can always help out.

“It’s always nice to give back. I always try to give back and it’s something I would like to keep on doing.” 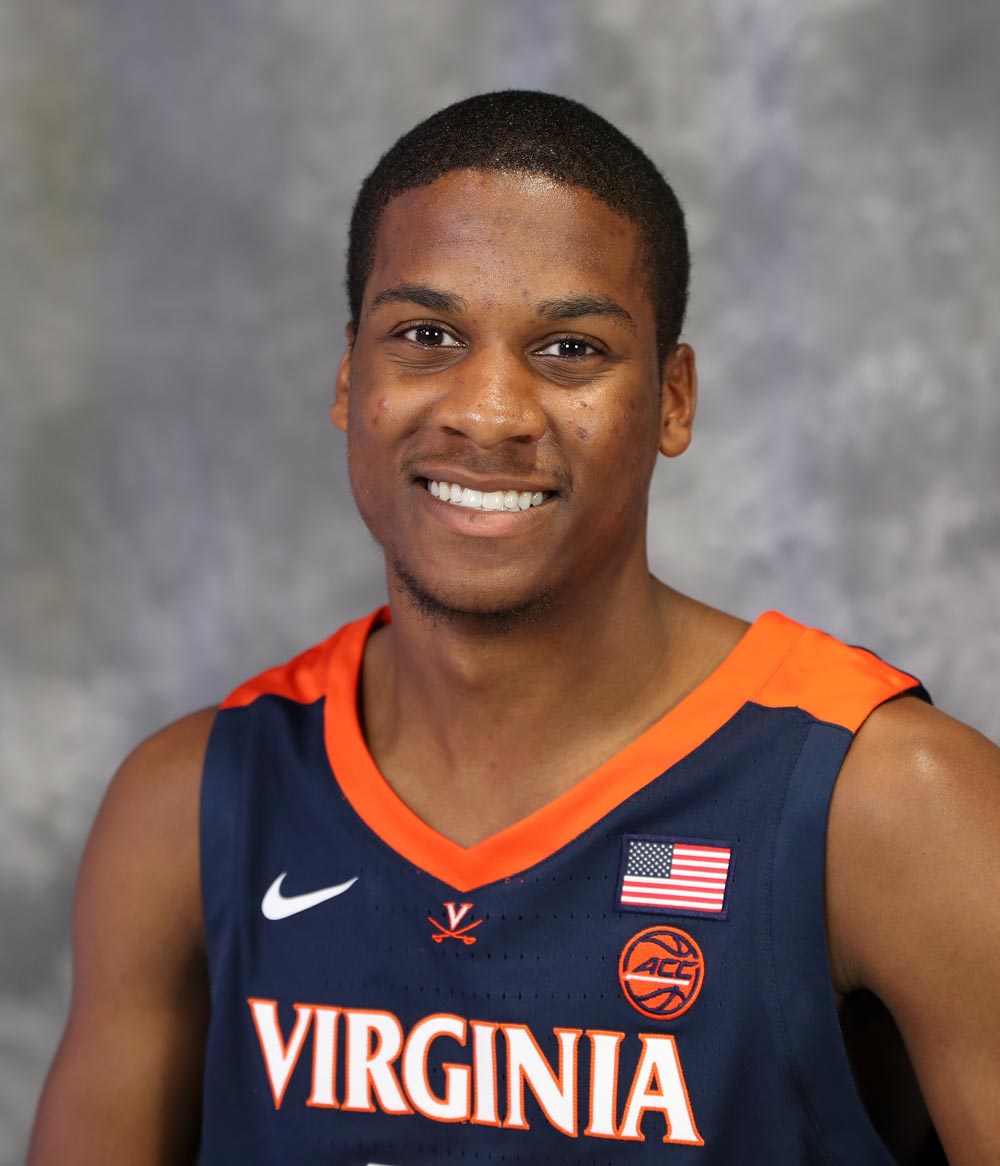 The first-year point guard from Norfolk worked at a number of youth basketball camps in his community while he was in high school.

Coleman said he came to UVA because “it felt like home.”

Over the summer, Coleman and other UVA team members volunteered at the Salvation Army and Goodwill. “We just cleaned up and sorted and organized and did whatever we could,” Coleman said. 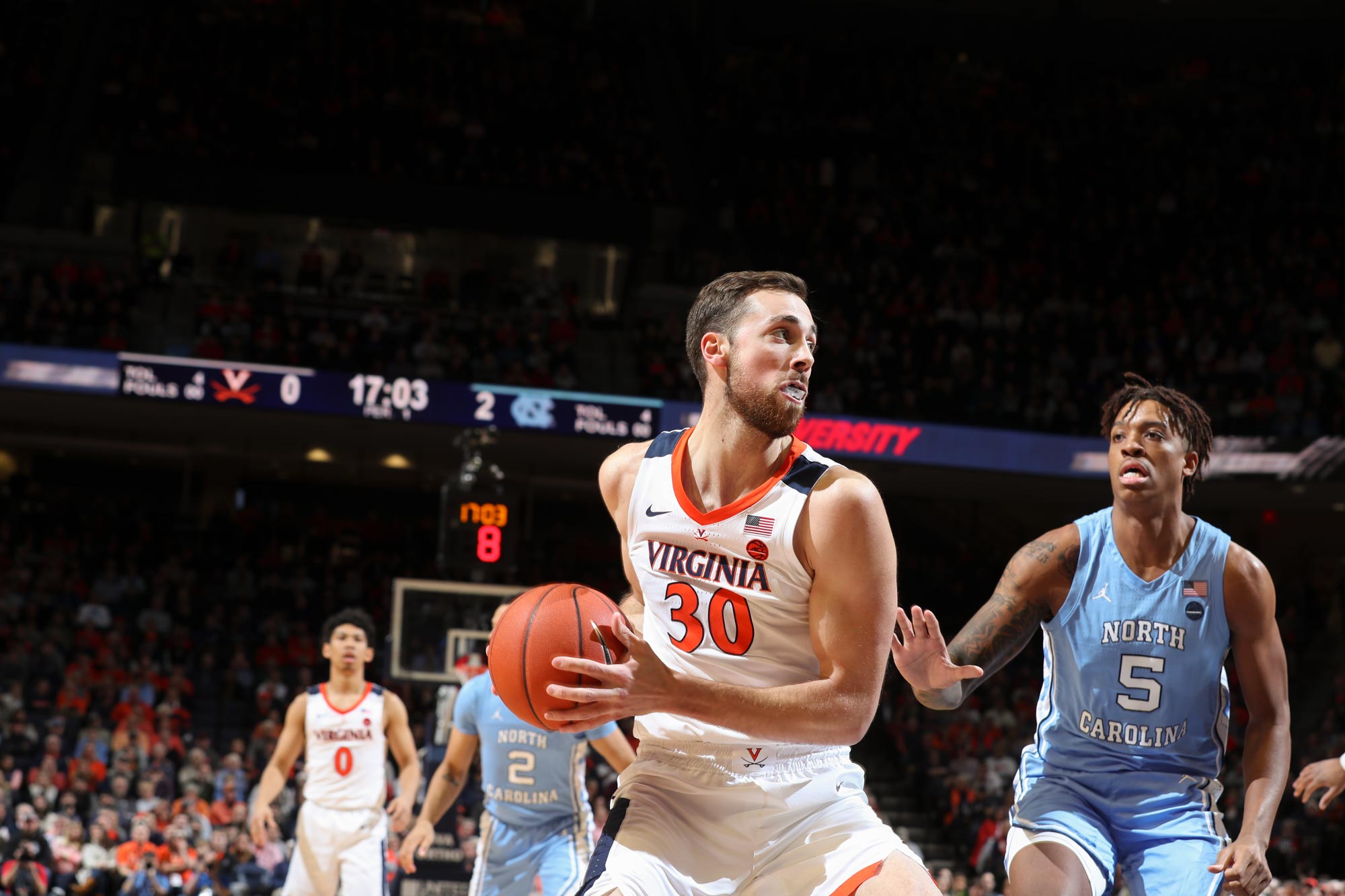 As a member of the Fellowship of Christian Athletes – where he has served as a leader for three years – UVA’s big man has always been service-oriented.

While in middle school in Durham, North Carolina, Huff volunteered as a church camp counselor, and on one field trip to a museum habitat, was tasked with cleaning up bear excrement.

“It was a big shovel,” said Huff, smiling. “I try to do stuff when I can, but it hasn’t involved any more bears.”

“Those types of things are great, and I feel we need to do them even more,” Huff said. “That’s one aspect of servanthood, but there’s also just serving each other, serving our team. I try to, even if it’s just a ride getting first-years places, stuff like that. I try and do that whenever I can.”