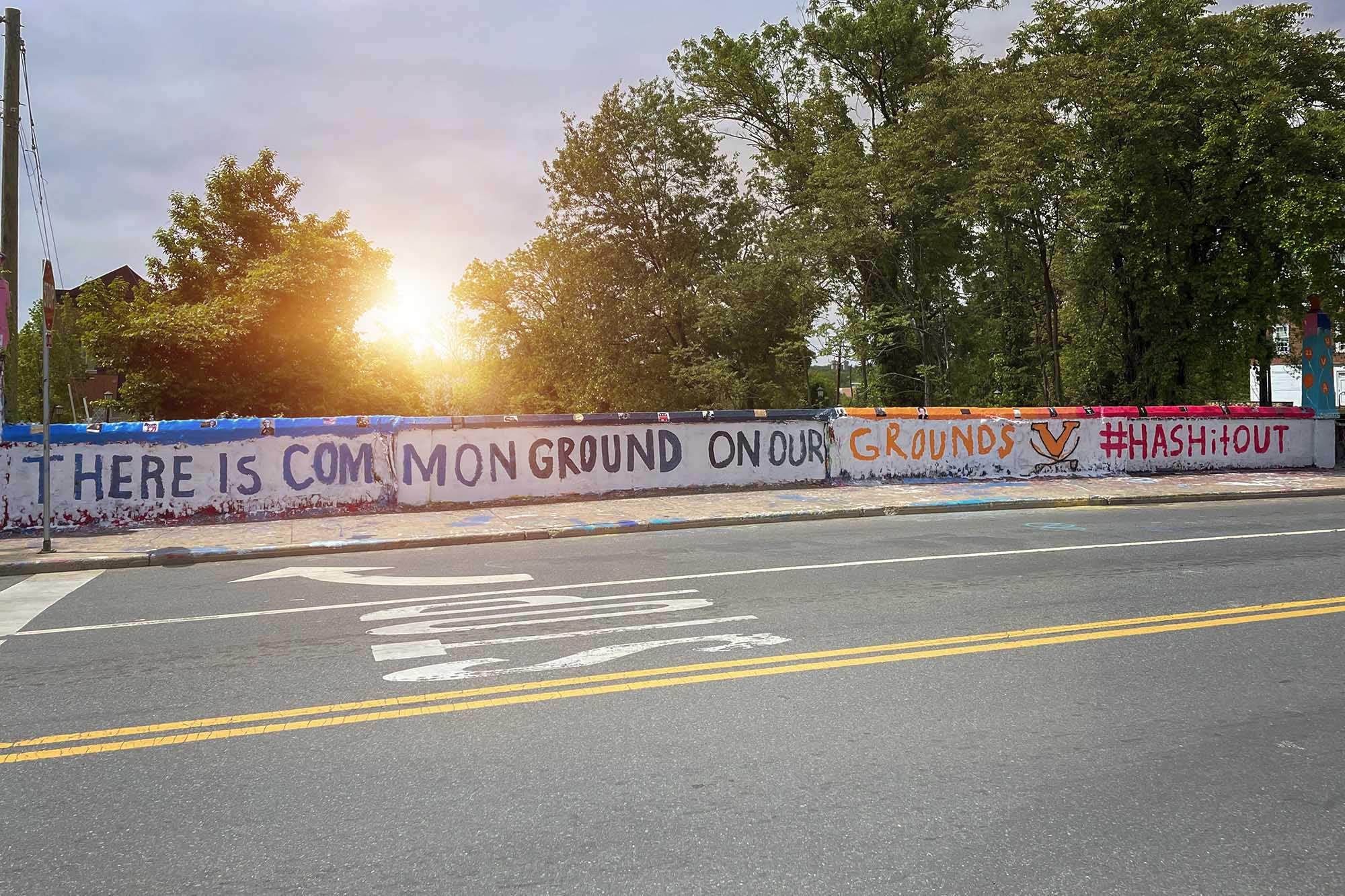 Students spanning the political spectrum painted Beta Bridge with a message: “There is common ground on our Grounds.” (Contributed photo)

Late last week, a group of University of Virginia students representing a wide range of political views gathered with UVA Center for Politics student interns to paint a picture of unity on Beta Bridge.

Their message – “There is common ground on our Grounds,” with the tag #hashitout – is simple, but well worth remembering in a time of intense political polarization. Even the color scheme is significant, with Democratic blue and Republican red merging into UVA’s colors of navy and orange.

The students who wielded the paintbrushes hold drastically different political beliefs. Some are part of the Republican Party or more conservative organizations on Grounds, while others are part of more liberal student groups or align with the Democratic Party. The point, student organizers said, is that however different their beliefs, they share at least one common goal: fostering productive debate and discussion.

“We started thinking about Beta Bridge as a form or representation of free speech. In some cases, it has been a kind of battleground, where different groups fight it out with different messages,” said third-year foreign affairs student Raed Gilliam, one of the Center for Politics interns who helped organize the Beta Bridge outing. “We wanted to agree on a message and paint it together, and it became part of our larger film project.”

The documentary, now in editing, will have three parts: individual interviews with students of widely differing political beliefs; a small group discussion bringing some of those students together; and the final scene at Beta Bridge.

“We invited students who were extremely committed to what they believe, at either end of the political spectrum, and who were not going to compromise on things that were important to them,” Piwowar, a government major, said. “Even though their beliefs were very different and they were not necessarily going to compromise on those, they could express those beliefs and have those conversations with each other.”

“The point was never to have people compromise on their political beliefs, but to see if they would be willing to talk about those beliefs in an effort to understand each other,” said Hayes, who is studying public policy. “Many times, those interactions only occur over social media, which can be difficult. We wanted to get people to talk in person.”

The idea for the documentary came at the beginning of the semester, when students were starting their internships and looking for ways to replace the in-person events Center for Politics students often work on, which were not held this year during the pandemic.

”The interns that are chosen to work for the programs area of the Center for Politics are usually able to work on something they already feel passionate about,” said Glenn Crossman, the center’s director of programs. “Projects in the past have included outreach to public and private schools through discussions in the classroom, to daylong programs hosted on Grounds, voter registration and education programs, spending the day on the Mall in D.C. recruiting citizens to take part in our latest documentary, research and editing and many more projects. Interns get to see the impact of their time and effort.”

This semester, of course, that was a bit different, as many in-person events were not possible. Students began brainstorming ways to spark public discussion about political events they were witnessing.

“We started the semester in a tense national political climate,” Gilliam said. To talk it out, they turned to film.

“I am very interested in filmmaking and recently bought a lot of gear, so we started talking about a mini-documentary,” he said. “Our idea was to have people do individual interviews, sharing their honest opinions on free speech, civility, ‘cancel culture’ and similar topics, and then get them together in a group to see if they could talk it out and have a good conversation.”

The Beta Bridge project became a kind of “grand finale,” an idea sparked by students in the film to bring together those who participated. In addition to painting the bridge, students chose photos and images that are meaningful to them – pictures of political heroes, verses, quotes, or images of documents like the Declaration of Independence – to paste on the bridge.

UVA President Jim Ryan stopped by on a run shortly after the bridge was painted, talking with students about the Common Grounds project and his enthusiasm for it. In an Instagram post, Ryan called it a “terrific (and apropos) example of bridge building.” Since coming to UVA, Ryan has continually encouraged students, faculty and staff to “build bridges” by reaching out, finding common ground, learning something new and making connections to build community. 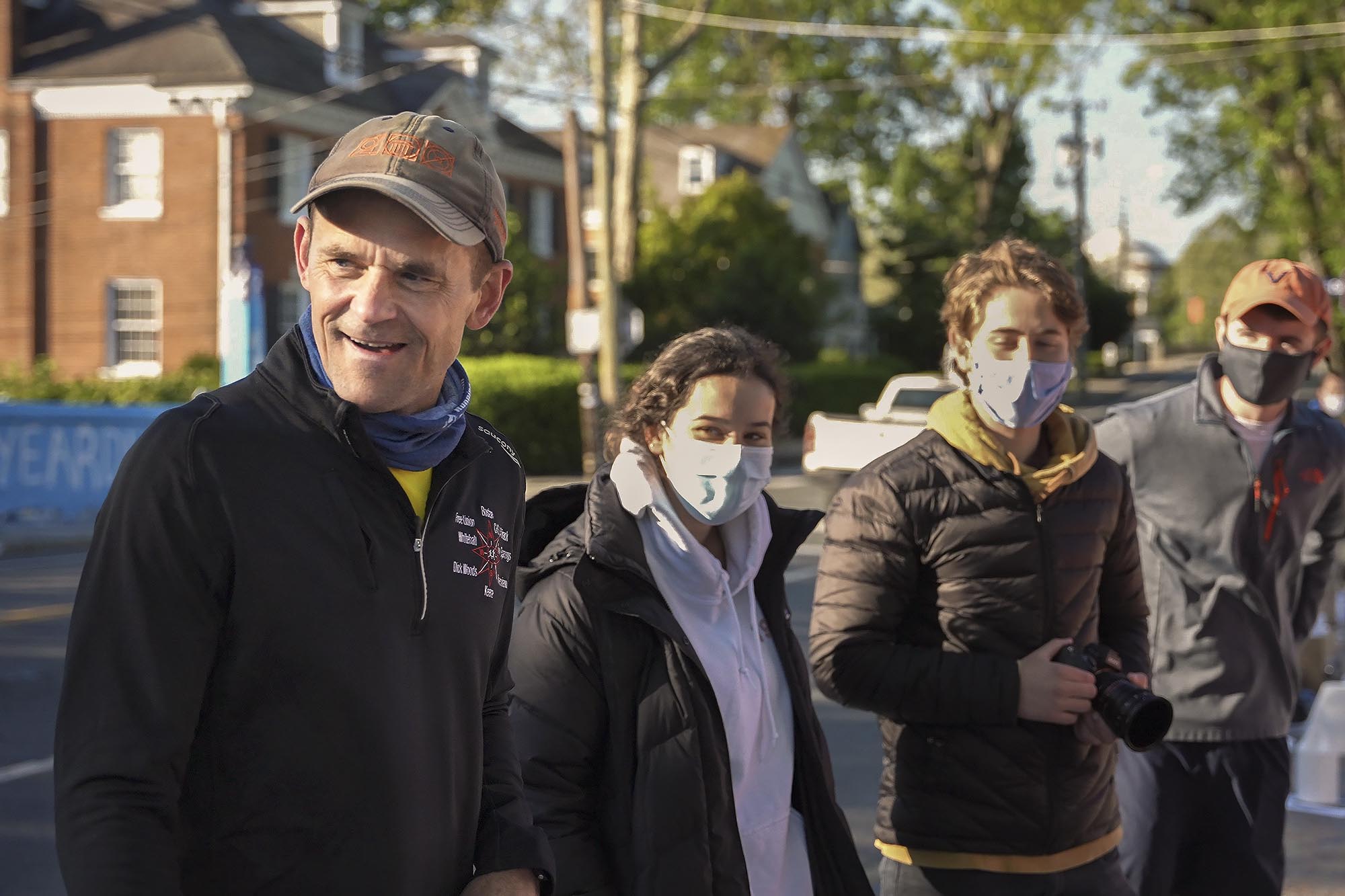 President Jim Ryan visited with students at Beta Bridge and shared his support for the project. (Contributed photo)

That kind of discussion should be a model for students, Spiotto said.

“I think the documentary is a good example for what UVA students should strive to do, when it comes to talking with people who disagree with you,” she said. “We had a good sample of students with drastically different political views coming together and having conversations. I think it shows that, at least some of us, care about this idea of civil discourse and want to set that example.”

The filmmakers themselves got a pretty hands-on lesson in the ideas they were promoting. Though they were all excited to work on the project, members of the team hold very different political beliefs. The interns meet with Crossman at least once a week to discuss various topics, including their own political views and challenges they were facing with the project.

“Every week brought new challenges, but they persevered,” Crossman said. “I think they would all agree it has provided them with excellent experience for the future.”

“Some of us are on very different sides of the political spectrum, and that was purposeful,” Hayes said. “We wanted to create a balanced documentary, not representing one side or the other.”

“It is an organic project, created by students with different viewpoints, and our whole experience making the documentary really reflects its goal,” Spiotto said.

“Ultimately, it is more of ‘descriptive’ project than a ‘prescriptive’ one,” Gilliam said. “We want to show the reality of the situation on Grounds, and how conversations go when we bring people together. It was a kind of experiment, to see how we can start conversations outside of our political bubbles and what might happen when we do that.”

The students hope to release a trailer in the next few weeks and share the film more widely in the fall, through the Center for Politics and other distribution channels.