Conservators Spiff Up Jefferson Statue, Others Around Grounds 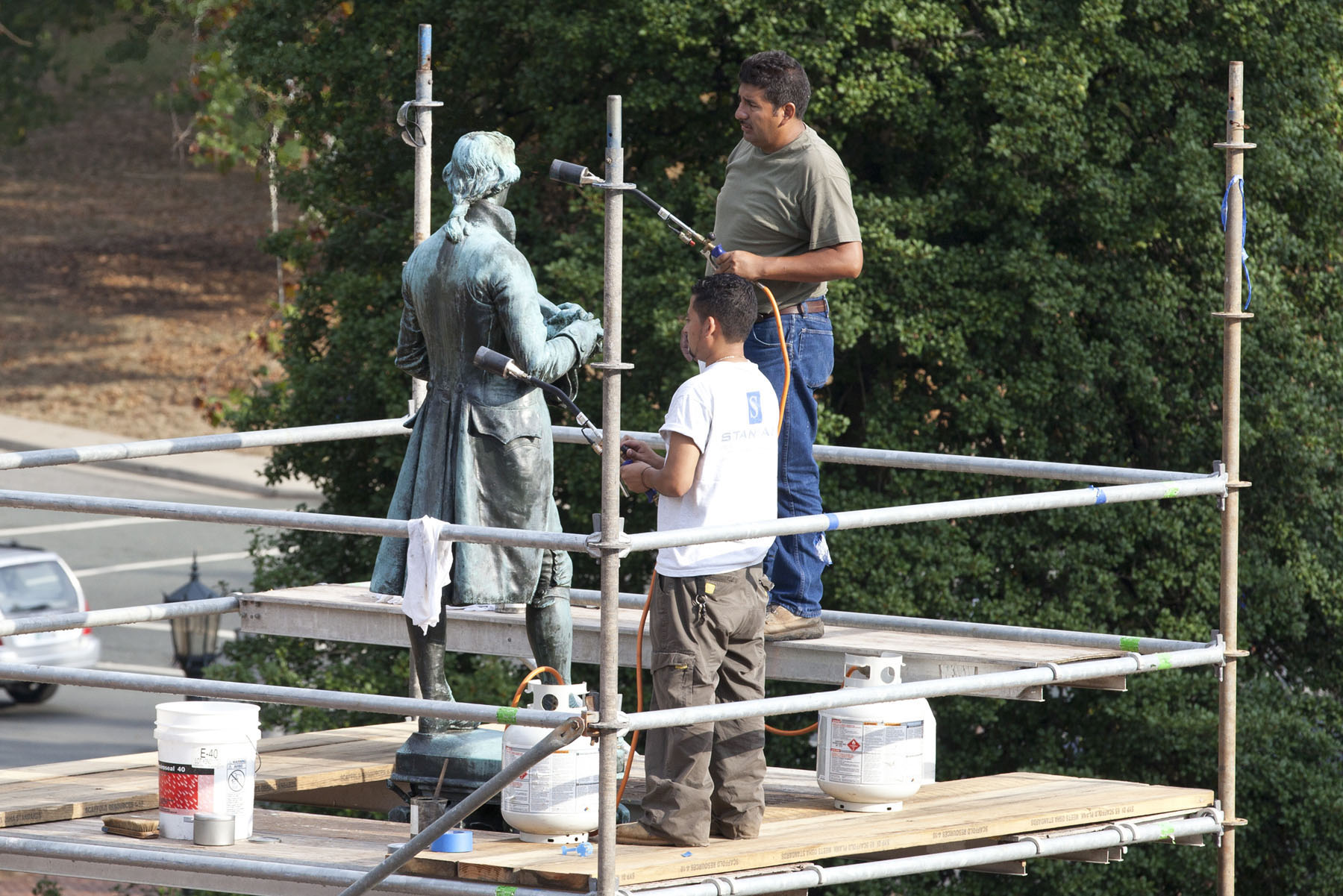 Craftsmen Rene Terrazas and Jacob Cruz (foreground), both employees of Conservation Solutions Inc., apply a layer of hot wax to the statue of Thomas Jefferson on the north side of the Rotunda.

The statue of Jefferson on the north side of the University of Virginia's Rotunda, installed in 1918, has been undergoing cleaning and repair at the hands of Conservation Solutions Inc. of Santa Fe, N.M. It is arguably the most prominent of several bronze figures around Grounds the firm has been cleaning in recent weeks.

Lindy Gulick, assistant conservator with Conservation Solutions, said the bronze was washed with a mild detergent and then coated with specially formulated hot wax that inhibits corrosion and brings out the luster of the bronze.

"Corrosion changes the metal's color to a teal green," Gulick said. "The statue was in good condition, but the metal was streaky. Now it's a nice green-black color."

There are several figures on the base of the statue, and conservators recast some elements of the statue that have disappeared over time. Gulick said they replaced two swords, a crown and the scales of justice on the base.

"These elements have been missing for a long time," she said. "We had to use old photographs of the statue to determine the proper size of each item."

The base of the statue, made of Italian Russo-Antico marble, has also suffered over the years, and Conservation Solutions is replacing pieces of it. The damaged area is cut from the stone and a replacement piece, cut from a block of Russo-Antico marble imported from Italy for this job, is carefully cut into place. Gulick said the craftsmen take great care to match the lines and patterns in the marble with the original.

Leonard T. "Spike" Weeks, contract administrations manager with Facilities Management, said the conservators have worked on several bronze statues on Grounds, including those of James Rogers McConnell (the "Winged Aviator," located outside Clemons Library), Homer (at the south end of the Lawn), Jefferson and George Washington (on both sides of the Lawn, at the end of the Lawn rooms), George Rogers Clark (near the intersection of West Main Street and Jefferson Park Avenue, and a Confederate soldier (in the University Cemetery).

Weeks said it has been about six or seven years since anything has been done with most of the statues.

In Memoriam: Life of Drama Professor To Be Honored Sunday END_OF_DOCUMENT_TOKEN_TO_BE_REPLACED