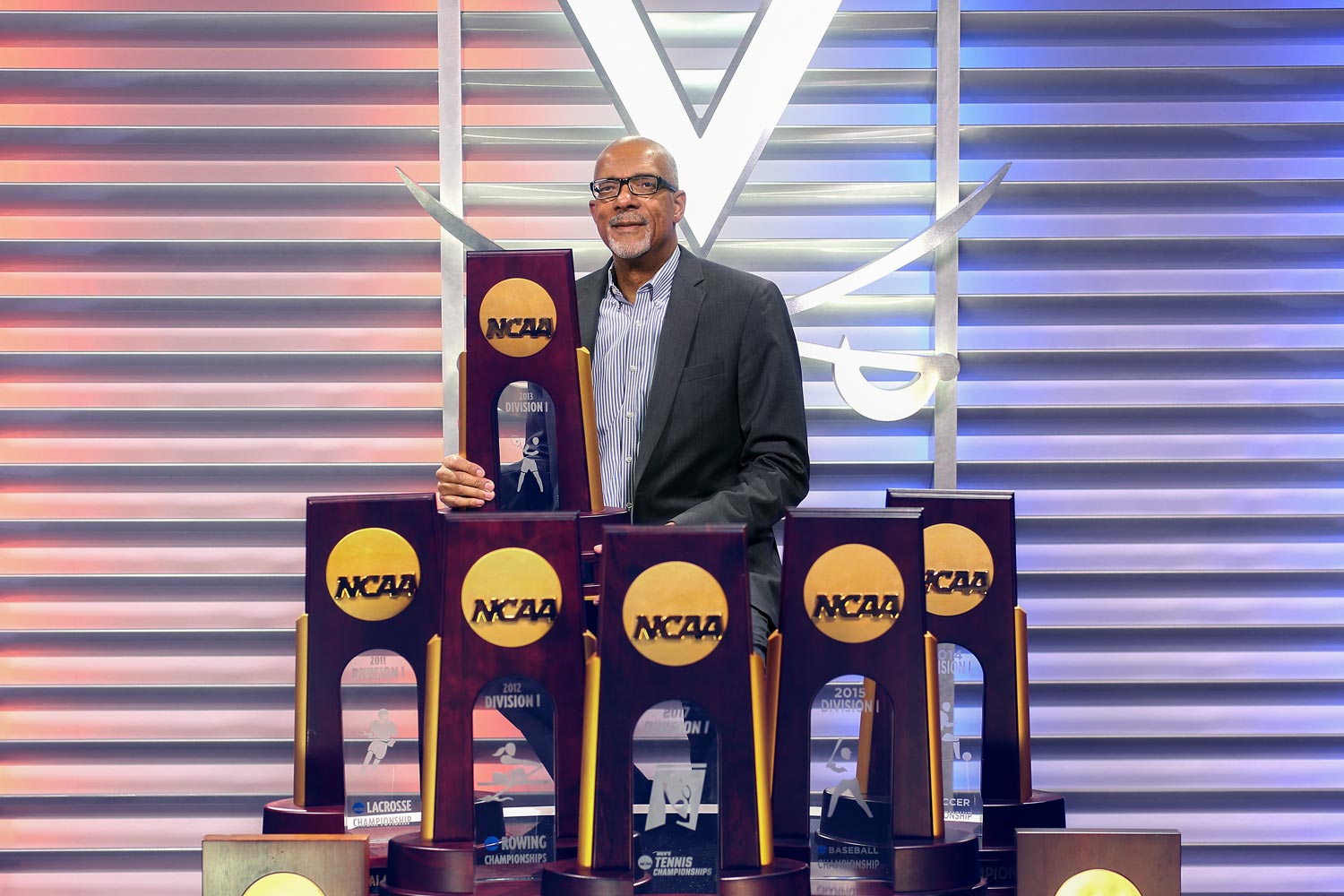 He’s begun moving out of his McCue Center office, box by box, and even the process of clearing off his bookshelves reminds Craig Littlepage of the possibilities the next chapter of his life will bring.

“There are probably a dozen books that I’ve gotten over the years that either I haven’t read at all and really want to get to, or books that I want to read again,” Littlepage said on a sunny morning in Florida, a few hours ahead of the University of Virginia’s Oct. 18 football game with the University of Miami.

He’ll soon have a chance to do so. After 16 years as UVA’s athletics director, Littlepage is retiring next month. His final day at work will be Dec. 8, he said, after which his daily schedule will change dramatically.

Littlepage, 66, said he’s excited to know that he’ll have “some time that I can just sit and read and not have a major decision in front of me or absolutely need to jump on the plane to get on to the next event. That’s a pretty good feeling.”

During Littlepage’s tenure as AD, UVA teams have won 13 NCAA championships and 76 ACC titles. In each of the past 11 school years, Virginia has finished in the top 20 of the Learfield Sports Directors’ Cup competition. (Points in the Director’s Cup standings are awarded by a school’s finish in each sport in which it competes in NCAA postseason play.)

He announced his retirement on Sept. 5, about a week after UVA’s longtime executive associate athletics director, Jon Oliver, announced he was leaving the department to pursue other opportunities.

Late last month, UVA named Carla Williams, the deputy director of athletics at the University of Georgia, as Littlepage’s successor. Williams will start work at Virginia on Dec. 11.

In the weeks since Williams’ hiring was announced, Littlepage said, he’s focused on “continuing to make sure that the trains are running on time and that things are getting done that need to get done, and making sure that whatever it is that Carla might need in terms of her transition to the University is being met.

“There have been a lot of conversations within our senior staff about what Carla will need and what we as a senior team will need to do to facilitate incorporating her ideas and philosophies.”

A graduate of the University of Pennsylvania, Littlepage had two stints (1976-82 and 1988-90) as an assistant men’s basketball coach at UVA during Terry Holland’s tenure as head coach. Littlepage also served as head coach at Penn and at Rutgers University.

He became a member of UVA’s athletics administration in 1990, when he was named an assistant AD.

Littlepage will attend a Board of Visitors meeting at UVA on Dec. 8. Later that day, he’ll head to Philadelphia for a relative’s wedding and the Villanova-La Salle men’s basketball game. Dec. 11 will find him at the University of Vermont for a ceremony in which the basketball court will be named for his good friend, Tom Brennan.

Sometime next month, he’ll start a new phase of his professional life, taking a part-time position in the president’s office at UVA.

“So I’m really excited about that,” said Littlepage, who has begun moving into his new University office at Boar’s Head Pointe. “It’s not that I’m winding down and I’m physically and mentally worn down and don’t have anything left. There’s still something left in the tank, but it’ll be something that’s triggered or directed in a different direction.”

There was a time, Littlepage said, when he considered giving up all professional responsibilities after leaving the athletics department. “And then the more I thought about it,” he said, “I realized there are things, either from a University standpoint or from a personal standpoint, that are important to me. So I’m better doing them now when I’ve got the energy and my health. I’m glad that I will be doing something and staying active.”

In his new role, Littlepage said, one of his duties will be continuing to do what has become a passion for him. As the University has endeavored to diversify its faculty and senior administrative team, Littlepage and his wife, Margaret, have helped new hires connect not only with the University community, but with the Charlottesville community as well.

“Over the years, Margaret and I, just because we love Charlottesville and we love the University, we would on our own take folks out to dinner, welcome them to join us at events, and that sort of thing,” Littlepage said. “So I pitched the idea with [UVA President] Terry Sullivan to formalize that and told her that I thought that I could be the right person to do that, and she got excited about the idea.”

That will be Littlepage’s primary responsibility, but he’ll also assist UVA’s executive search group, whose executive director is Catherine Lindqvist.

The first African-American AD in the history of the ACC, Littlepage discussed that status in September at his press conference at John Paul Jones Arena.

“From the very first days of being an athletics director through now, and it will continue in the future,” Littlepage said, “I’ve taken very seriously the opportunity and the responsibility that I have to mentor, to play a significant role in the development of young administrators and young coaches, whether they be ethnic minorities, whether they be women or other folks from diverse backgrounds.”

His final football game as AD was Friday night at Scott Stadium. In the annual battle for the Commonwealth Cup, Virginia was competitive against rival Virginia Tech, but fell to the Hokies, 10-0. Still, it was a better result than a year earlier, when Tech whipped the Wahoos, 52-10, in Blacksburg to close a 2-10 season.

In the Wahoos’ second season under head coach Bronco Mendenhall, they’re bowl-eligible for the first time since 2011. Littlepage believes a football program that has struggled for most of the past decade is returning to relevance.

“I think that the trend line is a positive trend line,” Littlepage said. “The other thing is, I’m absolutely convinced that Bronco and this team of assistant coaches that he has brought and the philosophy that he has brought are the right ones for the University of Virginia. ... It is a good feeling to know that there seems to be a path to sustained success in football.”

The athletics department has made significant strides during his tenure, Littlepage said, in “fully funding scholarships, supporting coaches and making all the coaching positions full-time that we can make full-time, providing the kinds of support services that we’re giving the student-athletes.”

A new support facility for football is planned, and when that project is completed, “that’ll probably be as significant a statement as we made when we built the John Paul Jones Arena,” Littlepage said.

JPJ is home to one of the nation’s premier basketball programs, overseen by UVA men’s coach Tony Bennett. A former chairman of the NCAA men’s Division I basketball committee, Littlepage takes particular pride in the Cavaliers’ success under Bennett.

During the Ralph Sampson era, the ’Hoos often had as much talent as any team in the country, Littlepage said. “But I think Virginia basketball for the most part has been successful as a result of the coaching staff understanding what a successful formula at the University of Virginia is, and that has been [to recruit] high-character kids who understand why they’re at the University, that take advantage of everything the University has to offer.

“I think it’ll be a rare situation where just from a talent standpoint we’re going to run through the ACC. So Tony came in with a mindset and a philosophy that was very consistent with that, from the experiences that he had at Wisconsin, the experiences that he had at Washington State University. Those were also situations where it was going to be rare where they had a team that was just going to out-talent people.

“So he has brought that, and just as importantly, he has brought the concept and embraced the concept that as much as anything, character counts. Yeah, you have to have the talent to be able to do the basics. But it’s going to be the character piece of it, and from the head coach to the assistant coaches to the players, to everybody that surrounds this program, you feel that and see that every single day, without a doubt.”

For about four months, starting in mid-October 2016, Littlepage cut back on his work schedule at UVA to attend to family matters. He resumed his full-time duties in February.

At a recent all-staff meeting at JPJ, Littlepage and his wife received an emotional tribute from Jane Miller, UVA’s longtime senior associate director of athletics for programs. As he looked out over the room at his colleagues, many of whom he’s worked with for decades, Littlepage recalled, “I was feeling a great sense of satisfaction for them, knowing everything that they had done over the course of their long careers at the University.”

A Year We Will Never Forget: 2019-20 in Review END_OF_DOCUMENT_TOKEN_TO_BE_REPLACED

‘What Will You Carry With You?’ Remarks From UVA President Jim Ryan END_OF_DOCUMENT_TOKEN_TO_BE_REPLACED