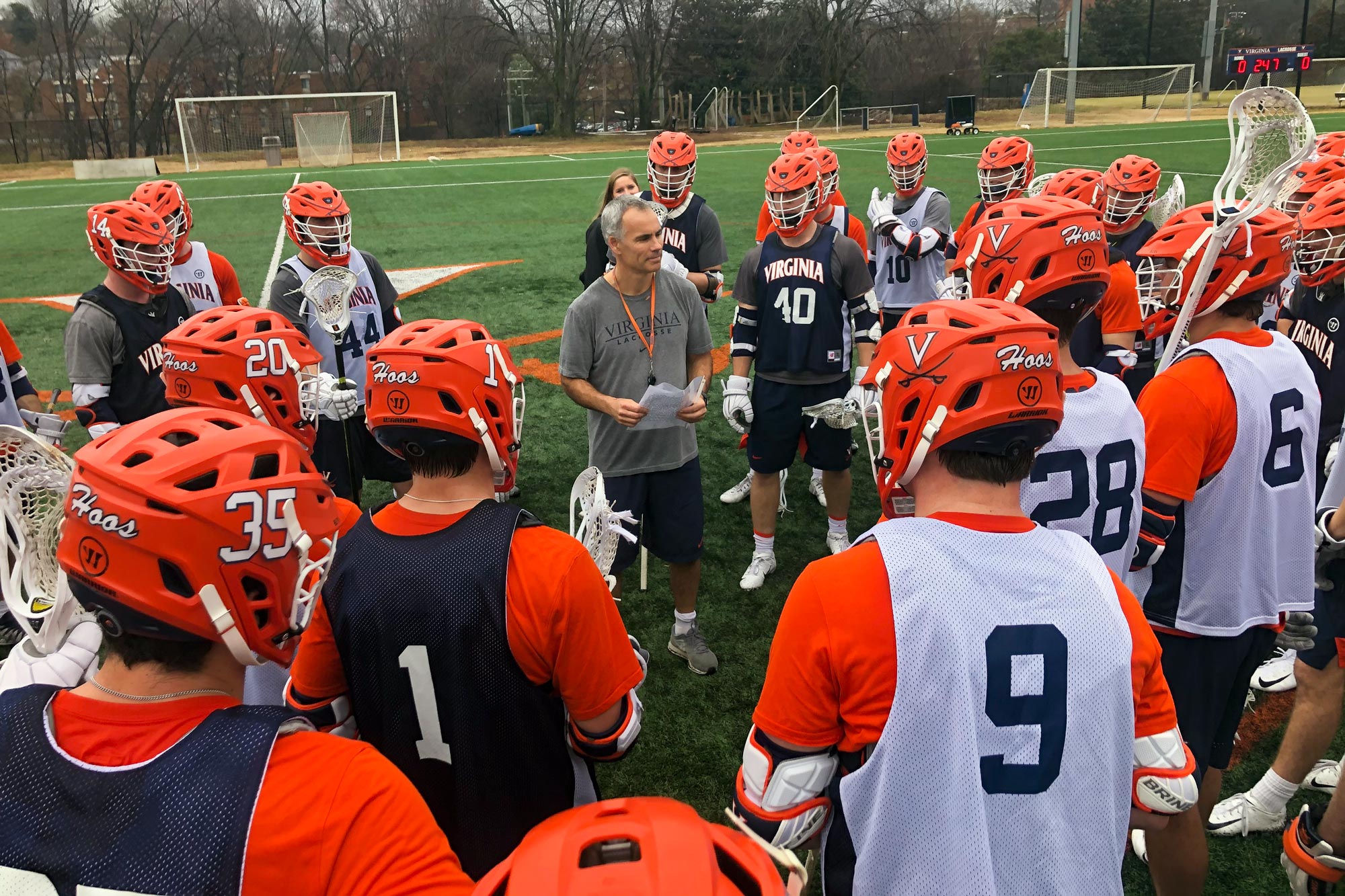 When new coaches take over athletic programs – no matter what the sport, or how successful the program was previously – they want to put their own imprint on them and build their own culture.

When Lars Tiffany took over as the head coach of the University of Virginia men’s lacrosse team in 2016 – succeeding his former coach and mentor – Dom Starsia, he wasn’t immediately sure how he would go about making the program his own.

But then he had an idea. It was a little bit outside the box, not the typical kind of team-building exercise you see with college athletic teams, yet Tiffany and his staff wanted to give it a try.

In 2017, they started a book club called “Cultural Thursdays.” Every semester, Tiffany and his coaching staff, in conjunction with team leaders, select a book to read. Then, every Thursday, at the start of practice, the team breaks into “families,” each comprising a first-, second-, third- and fourth-year student-athlete.

Each family discusses the book together, then the team comes together as a whole, with each family reporting what resonated and what they found valuable.

While many college athletic team-building exercises take place in the offseason or behind closed doors, so as not to interfere with precious NCAA-allotted practice time, Tiffany’s “Cultural Thursdays” take place for 30 minutes during actual practices every week of the year, in season or out.

“Some people might say, ‘You’re taking away time from your practice,’” Tiffany said, “but we felt this would be really valuable for us. And it has been.”

“It brings us closer together,” UVA third-year Kyle Kology said, “and really makes us talk about what we want out of this team, what we want to accomplish and how we can accomplish it.”

The first book chosen for Cultural Thursdays was “Legacy” by James Kerr, a story about leadership based on New Zealand’s All Blacks rugby team.

“At first, it didn’t seem like something the whole team bought into,” Kology said. “We would be like, ‘We just came from class. We don’t want to read a book.’”

“I’ll admit we didn’t hit a grand slam right away in terms of our discussions and making ourselves vulnerable and sharing ideas,” Tiffany said. “It took a few months.”

Tiffany said the breakthrough occurred in the spring of 2018.

Former UVA captain Scott Hooper felt so strongly about a book, “The Gates of Fire” by Steven Pressfield, that he purchased 50 copies with his own money to give to teammates. The book recounts the ancient Greek Battle of Thermopylae through one of its only three survivors.

“How the book dived into this Greek city-state’s warrior ethos and committed all into the city-state – as opposed to internal or selfish goals … it was something our team needed [to hear],” Tiffany said.

Players responded so positively to the book that Tiffany decided to assign group projects in which players could take an even deeper dive into the subject matter.

Some groups wrote reports. Others – getting really creative – performed skits in which they reenacted battles.

“I think that’s when men in the program – some of whom were unwilling to share their internal thoughts – were all of a sudden exposing themselves and what they believed in,” Tiffany said. “I saw laughter, I saw enjoyment in Cultural Thursday at that point, and I think that’s when it really took off.”

“I feel like it brings our team together, it allows for more people to speak up on our team – not just our captains. It’s our whole entire team just coming together.”

Leading into last year’s NCAA championship season, the team read “Boys in the Boat,” which tells the story of the University of Washington crew team that won gold at the 1936 Olympics in Berlin.

“It focused on a rower who wasn’t the biggest or strongest,” UVA third-year Matt Moore said. “He just had to grind his way up. And he wasn’t just happy to be there. He wanted to be the best.

“It taught us you don’t need to be the biggest or the best. You just have to have that heart, that willingness. It doesn’t matter where you grew up. The biggest takeaway was that you have to earn everything. Nothing’s given.”

This past fall, in the aftermath of its incredible run to a national title, the team read “The Obstacle Is the Way,” by Ryan Holiday.

Loosely based on the Roman philosophy of stoicism, the book is broken into sections that use historical anecdotes and figures from politics, commerce, sports and history, including Theodore Roosevelt, Amelia Earhart, Laura Ingalls Wilder, Barack Obama, Steve Jobs and others.

This semester, the team is reading Starsia’s book, “I Hope You Will Be Very Happy.” In the book, the Hall of Fame coach – through a series of letters to players, coaches, parents and others – chronicles leadership lessons he learned through the sport.

“It’s just really good storytelling, and you can see what the legacy of Virginia lacrosse is,” Kology said. “You know, growing up, you have that euphoria of coming here and playing for such a historic program. But I feel like when you’re here playing, you can kind of lose that nostalgic feel a little bit of what it was like when you were 5 years old watching on TV.

“The book kind of brings me back to when I was a kid.”

Tiffany said his ultimate goal is to find eight really good books – so that he can cycle through two per year over the duration of a player’s four-year career.

Moore said Cultural Thursdays have helped create an atmosphere where everyone is empowered and holds each other accountable.

“The first- and second-years – it’s kind of like their floor to go out and pretty much share what they think about our team and about certain issues,” he said. “I feel like it brings our team together. It allows for more people to speak up on our team, not just our captains. It’s our whole entire team just coming together.”

Victories and championships aside, Moore and Kology take great pride in the fact Cultural Thursdays will be part of their legacy.

“It will be something,” Kology said, “that will survive us here at the University and keep going on.”

Class of 2020: Memories and Moments From a Long-Anticipated Celebration END_OF_DOCUMENT_TOKEN_TO_BE_REPLACED