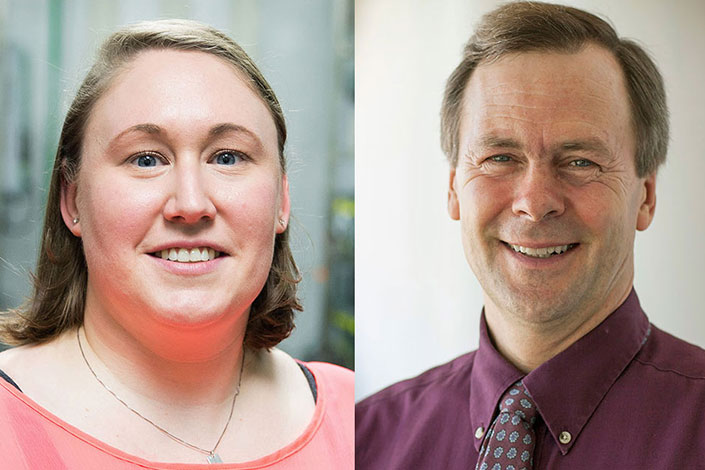 The awards, given by the State Council of Higher Education for Virginia and Dominion Resources, recognize superior accomplishments in teaching, research and public service.

Cushman and Kucenas are among 13 faculty members selected this year from a pool of 88 nominees from institutions statewide. They join 34 previous winners from U.Va. and one from U.Va.’s College at Wise since the awards were first presented 29 years ago.

Virginia Gov. Terry McAuliffe will honor Cushman, Kucenas and their fellow awardees during a Feb. 19 ceremony at the Jefferson Hotel in Richmond. Each will receive $5,000 and a commemorative engraved award, underwritten by the Dominion Foundation, the philanthropic arm of Dominion Resources.

“With Dominion’s support, the annual recognition of Virginia’s outstanding faculty members is truly one of the agency’s most rewarding activities,” SCHEV Director Peter Blake said. “We are honored to highlight the accomplishments of these professors who lend their extraordinary talents to their students, their institutions and the commonwealth of Virginia.”

Awardees are nominated by their peers at Virginia’s public and private colleges and universities. A selection committee, made up of members of SCHEV and education, business and community leaders, chose the 13 winners.

“Professors Cushman and Kucenas are wonderful examples of faculty who commit to outstanding teaching, scholarship, research and service to our University, its students and the citizens of the commonwealth,” said U.Va. Executive Vice President and Provost John D. Simon. “The commonwealth’s highest honor is well deserved by both of these professors for their ongoing dedication.”

Cushman, Robert C. Taylor Professor of English in the College and Graduate School of Arts & Sciences, specializes in American poetry. He publishes his own poetry and delves into historical research combining literature and the Civil War.

Two books of his were published in October: “Belligerent Muse: Five Northern Writers and How They Shaped Our Understanding of the Civil War,” from the University of North Carolina Press; and “The Red List,” from the Louisiana State University Press, his fifth book of poetry. He was the general editor of the “Princeton Encyclopedia of Poetry & Poetics,” published in 2012.

Since 2003, Cushman and U.Va. history professor Gary Gallagher have team-taught an upper-level undergraduate course, “Voices of the Civil War.” This year, both hold the Cavaliers’ Distinguished Teaching Professorship, a two-year chair that recognizes eminent scholars for excellence in teaching, administered by the Teaching Resource Center.

For 16 years, Cushman has taught one of the three survey courses required of English majors. He estimates that he and co-instructor Michael Levenson have taught 4,400 students in that class alone.

“The consensus of faculty and students year after year is overwhelmingly consistent,” writes Cynthia Wall, who chairs the English department. “Stephen Cushman’s teaching changes lives and lasts lifetimes. He is what we all want to be: intellectually rigorous, philosophically challenging, deft in directing discussion, and memorably effective teaching writing, close reading and argument. (Oh, and hilarious).”

Described by students and colleagues as a master communicator, mentor and role model for young women in the sciences, Assistant Professor of Biology Sarah Kucenas shares her expertise not only in the classroom, but also in forums in the Charlottesville community and through her research into the nervous system.

She challenges her students to think deeply and critically about their study material and to actively participate in their own learning. She also encourages her undergraduate students to actively participate in actual research in her lab, work that generally would be accomplished only at the graduate level. Her dedication to teaching has earned her a Department of Biology Distinguished Teaching Award and the U.Va. Alumni Board of Trustees Teaching Award, the highest teaching honor bestowed upon junior faculty at U.Va.

Kucenas is internationally known for her research to harness the regenerative capacity of the developing nervous system to help it repair itself during disease, research that could possibly lead to the development of target drugs that could help the nervous system self-repair. This has implications for the treatment of many childhood neurodegenerative diseases, including muscular dystrophy, pediatric multiple sclerosis and Charcot-Marie-Tooth disease.

During her five years at the University, she has earned nearly $2 million in research funding.

The Dominion Foundation has fully supported the Outstanding Faculty Awards program since 2005. Since the first awards ceremony in 1987, a total of 341 Virginia faculty members – including the 2015 recipients – have received this high honor.

“This is the 11th year Dominion has sponsored the Outstanding Faculty Awards,” said Hunter A. Applewhite, president of the Dominion Foundation. “When you read the nomination packets of these recipients, you are struck by their passion for their subjects and their devotion to sharing it with their students.”

When Less Is More: How Harnessing the Power of Subtraction Can Add to Life END_OF_DOCUMENT_TOKEN_TO_BE_REPLACED