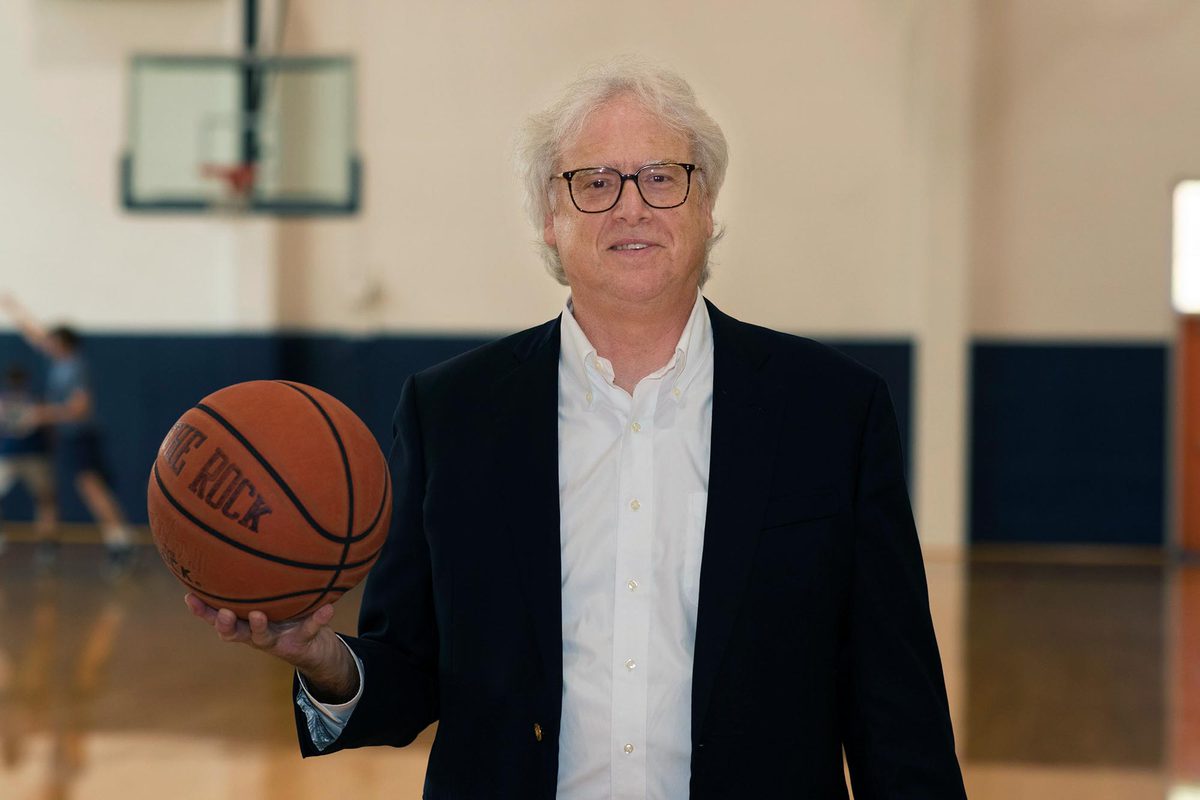 Like many University of Virginia basketball fans, Robert Carraway was glued to his television last spring, shaking his head in disbelief after every miraculous comeback by the Cavaliers as they marched toward an NCAA championship.

“There were at least three different times where I gave up and said, ‘Virginia’s going to lose,’” Carraway said, “and then the way they would turn it around at the end was truly amazing.”

Carraway never expected he would help retell the story to a worldwide audience.

But that will be the case tonight when the Darden School of Business associate professor appears on the ACC Network’s new documentary, “Unbelievable: Virginia’s Improbable Path To A Title.”

The 60-minute piece, debuting Wednesday at 8 p.m., takes a deep dive into UVA’s run to the 2019 championship, which came a year after suffering a heartbreaking loss to the 16th-seeded University of Maryland, Baltimore County in the first round of the 2018 tournament.

Carraway, who has been on the UVA faculty since 1984, teaches quantitative analysis courses in Darden’s MBA program.

A North Carolina native who grew up playing and coaching basketball at the high school level, Carraway filmed his segments for the documentary over the summer.

“When I first did it, I told some friends, ‘It probably won’t get off the cutting room floor,’” said Carraway, whose areas of expertise include decision analysis, critical thinking, optimization, innovation and organizational culture. “I think I’m going to get a lot of ribbing from people in this – which is fine.”

He recently took some time to answer a few questions about his involvement in the documentary.

Q. You probably didn’t envision ever being a part of an ESPN documentary about the Hoos championship. How did that all come about?

A. It all came about when Dave Hendrick [from Darden] contacted me and said they were looking for a professor, maybe someone who taught statistics, to try and provide some commentary on just how unlikely some of Virginia’s escapes were in the tournament.

Being a big basketball fan, I said “sure” and that I’d be glad to. But no, I never imagined being in an ESPN show of any type.

Q. Can you share a little bit of that experience, perhaps give UVA Today readers a bit of an inside look?

A. We arranged to meet on the Lawn and taped most of the stuff in and around the Rotunda. What they wanted from me was a series of 15- to 20-second clips where I would talk about the probabilities associated with each of the games as they marched through the tournament, starting with an introductory piece about what had happened the year before and how unlikely it was that UVA would lose to the University of Maryland-Baltimore County.

It was a very hot day, so that was one of my challenges. I tend to sweat easily when it’s hot. They had to keep mopping me down, so to speak. But it was fun. I do online classes at Darden, so I’m fairly comfortable being on camera and doing stuff like that. It wasn’t like it was totally foreign to me, but the content was definitely different than what I usually do.

Q. Do you remember what some of those probabilities were?

A. The very first game against Gardner-Webb, Virginia’s chance of winning fell as low as 70%. For the Purdue game, they had specific probabilities based on how much time was left in the game. Same thing for the Auburn game.

If it hadn’t been for the Purdue and Auburn games, the escape versus Texas Tech in the last 20 seconds would have been considered an amazing ending. But after the Purdue and Auburn games, it just didn’t seem as dire – and that’s the comment that I kind of ad-libbed [in the documentary]. It just seemed like, at that point – trailing by three with less than 20 seconds left – you just kind of had the feeling they were going to do it.

Q. In looking back at that wild ride, what struck you as the most incredible moment?

A. The Purdue game, by far. When [Ty] Jerome missed the free throw and the clock was ticking down and Kihei [Clark] chased it down in the backcourt and then hurled the pass, there wasn’t time to do anything. [Mamadi] Diakite just had to catch it and immediately throw it up. That was an amazing play.

Q. But you got your Ph.D. from Purdue University. You weren’t rooting for the Boilermakers in that game, were you?

A. No, no, no [laughing]. That wasn’t a consideration. I was at Purdue back in the early ’80s during the Gene Keady era. I went to some games, but I was never really a fan. I grew up in ACC country, and the Big 10 game, whenever I watched it, honestly always felt like an ugly game to me – incredibly physical. I thought the ACC played a much more beautiful, flowing game of basketball.

Q. Where were you watching the team’s final few games, and what was going through your mind during those almost improbable victories?

A. I watched them by myself in my living room, in part because I really like to concentrate on the game itself, but also because once we had the first miracle escape, I felt like, from a good-luck standpoint, I needed to just keep replicating what I had been doing.

Q. Have they given you a sneak peek of the documentary yet?

A. They have not. I was the last person they filmed. I think they had spent two days talking to [UVA head coach Tony] Bennett and the players. They were on their way out of town when they recorded me. But at that point, they didn’t even know if I would be included or not. I think they just wanted to keep their options open.

It wasn’t until a week or two ago that I found out that I was in the documentary. I have no idea how much of what I did is in there. Who knows what they’ll actually end up including.

Q. Are you excited to find out?

A. It’s exciting, but it’s a little bit of trepidation, because who’s going to watch this? It’s going to be mostly Virginia people. Quite a few people I know will be watching. Unlike something that strangers would watch and doesn’t feel quite so personal, these are going to be people I know who see this.

The other thing, I have to admit, is that I’m sure Tony Bennett and the players don’t know me from Adam. If I’m them and watching this, I’m like, “Who is this guy? Where did they get him from?”

Q. But it sounds like, given your basketball experience, they could have done a lot worse.

A. That is true [chuckle]. I love the game of basketball. I always have. I think the whole notion of the sum is greater than the parts is what really fascinates me. And I think that is what Bennett does so well. Even if I weren’t at Virginia and, naturally, a Virginia fan, I’m pretty sure I would root for him.