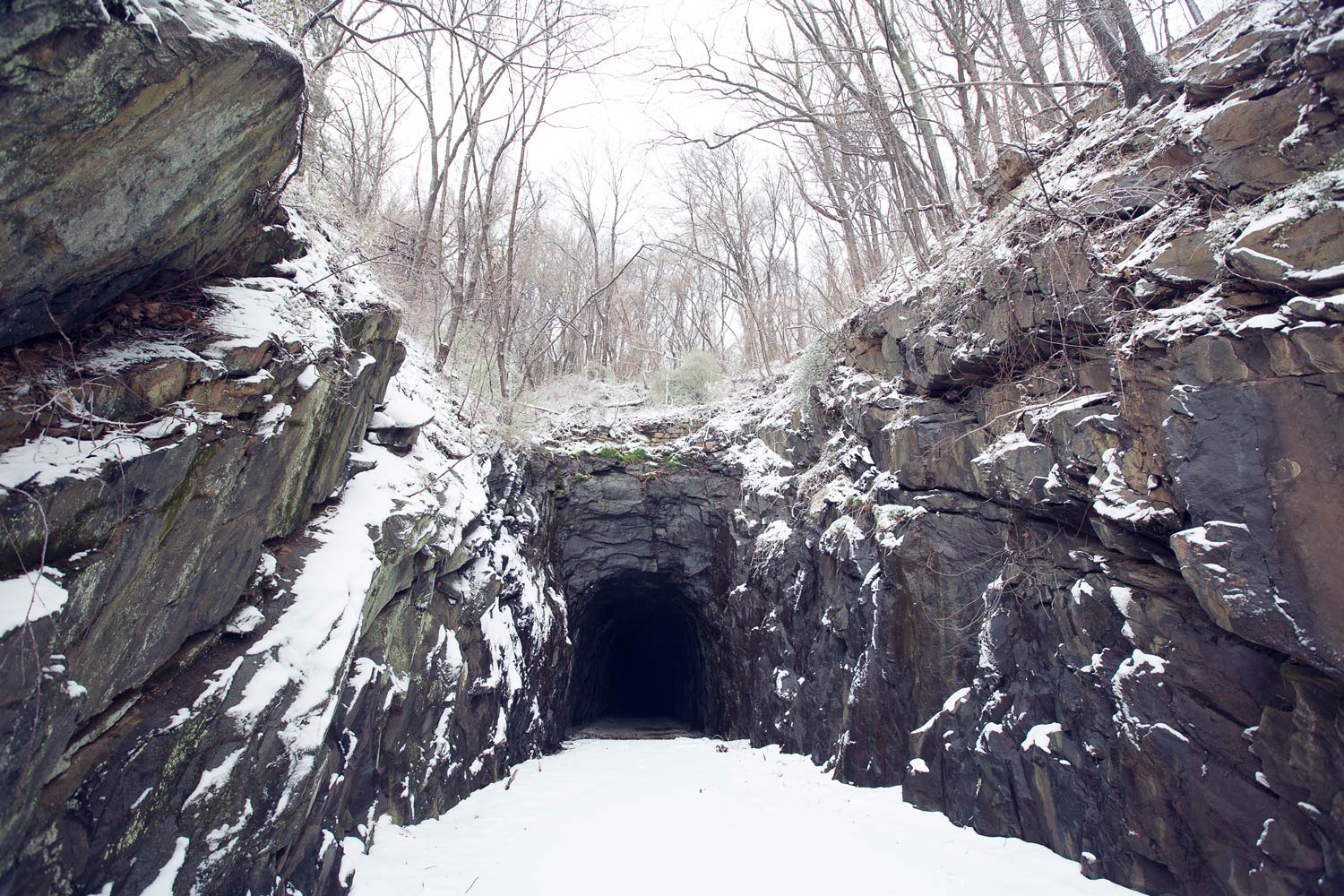 An entrance to the Crozet Tunnel, originally dug through Afton Mountain as a railway tunnel. (Photo by Jack Looney)

Nicola Bezzo is using robots to map the past.

Bezzo, a University of Virginia assistant professor in the departments of Systems and Information Engineering and Electrical and Computer Engineering, and two of his graduate students, Esen Yel and Tony Lin, have had a hand in mapping the Blue Ridge Tunnel, a railroad passage cut through Afton Mountain. Claudius Crozet engineered the tunnel, which was completed in 1856.

The Claudius Crozet Blue Ridge Tunnel Foundation is seeking to restore and reuse the tunnel as a community landmark and recreational and educational resource and create a historical interpretation of it. The foundation created a consortium involving Nelson, Augusta and Albemarle counties and the City of Waynesboro, along with the National Park Service, the Commonwealth Transportation Board and the Virginia Department of Transportation.

Leidos, an information technology, science and engineering firm, is using the tunnel to test some of its software, scanning and mapping and producing a three-dimensional model of the tunnel. A Leidos team explored the tunnel with its Structure from Motion software suite that takes photos or videos with ordinary cameras and mathematically manipulates them to produce 3-D models viewable on-screen or with augmented or virtual reality goggles.

“The models should be useful for planning construction or restoration,” said James Bush, Leidos’ chief solution architect. “We also have used the software above ground to make models of both the interior and exterior of buildings.”

Leidos asked Bezzo, whose laboratory has been researching autonomous vehicles, to collaborate on research and to deploy a robot in the tunnel and laser-scan the walls, ceiling and floor, using Light Direction and Ranging, or LiDAR, technologies. The company planned to compare the results from each technique.

“Mike Raker, a senior Leidos engineer, was visiting my lab and saw the robots and the sensors and decided to do an experiment,” Bezzo said. “This way we can establish a database and build a historical archive. We are assessing the tunnel and seeing how much it had changed over time.”

When the team entered the tunnel on Oct. 26, Bezzo first thought to deploy an airborne vehicle to fly through the tunnel, but then decided to use a ground-based robot.

“The ground-based robot is more stable, less risky, more robust,” Bezzo said. “Some of the electronics on the [flying] drone are exposed and there is water dripping from the ceiling, which could have caused some problems.”

He said the robot is good at moving over strange terrain, collecting information and classifying the terrain over which it is moving. He said the robot makes decisions autonomously on how to move and the best action to take, such as moving slowly on ice. 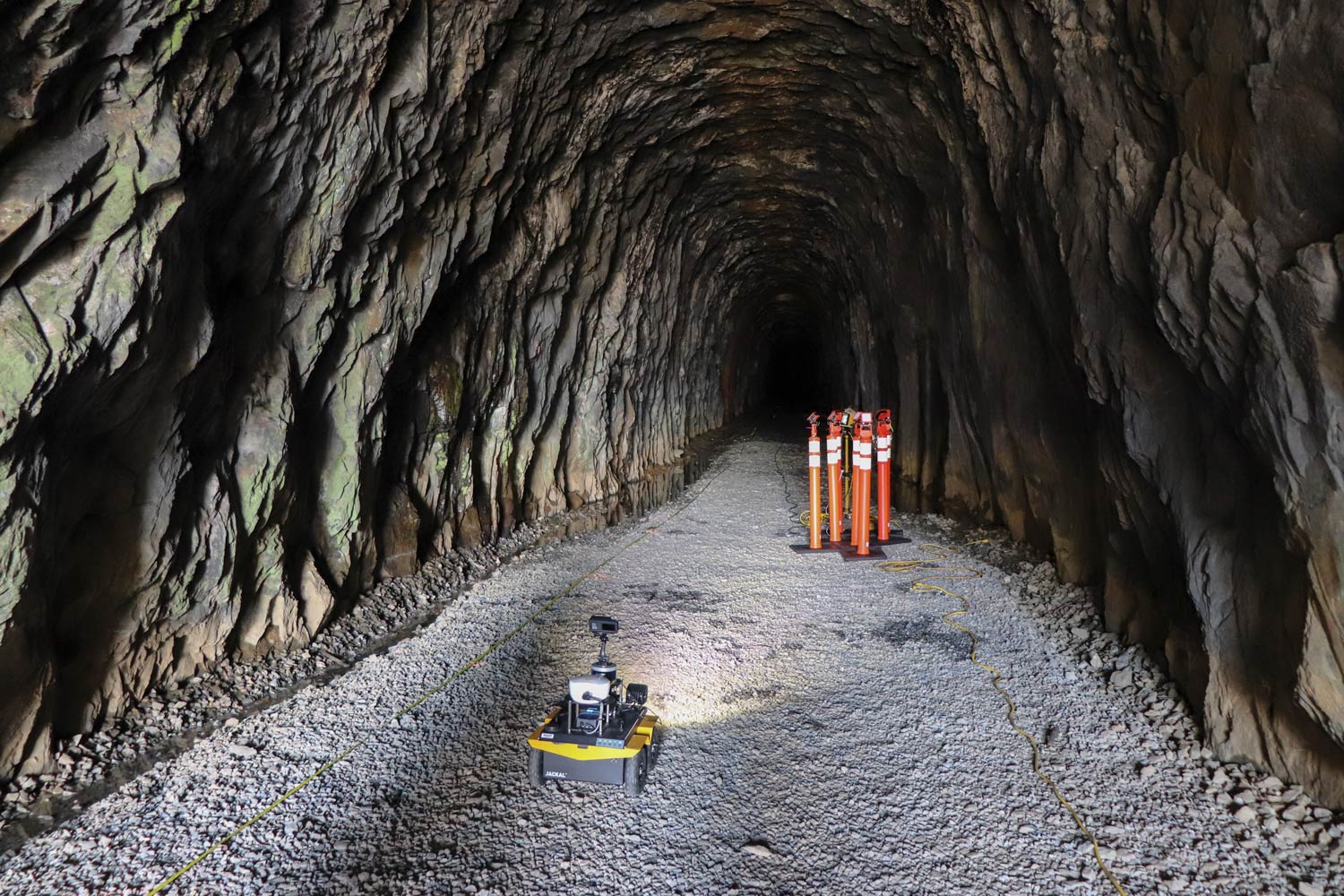 The robot enters the Crozet Tunnel to start its mapping process. (Submitted photo)

Bezzo said the robot travels at about 2 mph, and it took about a half-hour to map a half-mile of tunnel. He said the robot could map at 5 mph, but in the tunnel it would shake and vibrate when going over rocks and that would not be conducive to precision mapping.

While the robot is powered by an electric motor, it can travel through some shallow water without damage. It downloads information onto a computer as it collects it and builds a map on the computer.

Esen Yel, a second-year Ph.D. student from Mersin, Turkey, said the team was able to work successfully despite the tunnel’s dark, wet and rocky conditions.

“The Crozet Tunnel experiment was actually a complicated job because operating these type of vehicles outside the lab environment always brings some challenges,” she said. “The tunnel environment was harsh since there was water everywhere, the surface was not level and we didn't know how it was going to look like beforehand, which required us to be prepared for everything.”

Being prepared for everything includes having to move quickly.

“We had one and a half days to prepare to make very accurate maps,” Bezzo said. “We decided to use the robot because it scans in 360 degrees with multiple laser scanners spinning around, to get a complete view.”

Bezzo said the robot builds a map and, at the same time, is able to locate itself on that map inside the wet and rocky tunnel.

Bush said Leidos will compare Bezzo’s LiDAR scans with Leidos’ Paralax3D results. Bezzo and Leidos may work together again soon to map the other half of the tunnel.

“Nicola and his team were very professional,” Bush said. “We are interested in his LiDAR work as well as the robotics aspects. We may do another trip to the Crozet Tunnel in the spring since we only did one side. The other side is more difficult to access and robotics may be important.  We also plan on visiting his lab as soon as our schedules allow.”

Bezzo appreciated the opportunity to deploy the robot under realistic conditions.

“This is a very interesting environment, working under real conditions and seeing how quickly we could deploy our equipment,” he said. “We got to show how versatile the technology is as we used it for different things, assessing the environment and the infrastructure. If we were inspecting bridges, we would have used drones.”

Bezzo said there were many advantages to using the robot. It deploys quickly, and its multiple LiDARs and other sensors, like gyroscopes and encoders, can sense everything and gather a lot of data, creating detailed maps and cataloguing the types of material it encounters.

The excursion was also beneficial to his students.

“By mapping the Crozet Tunnel, I’ve learned that the experiments outdoors can be very different and require more preparation that one would never think about while testing something in the lab,” Yel said.

When Less Is More: How Harnessing the Power of Subtraction Can Add to Life END_OF_DOCUMENT_TOKEN_TO_BE_REPLACED