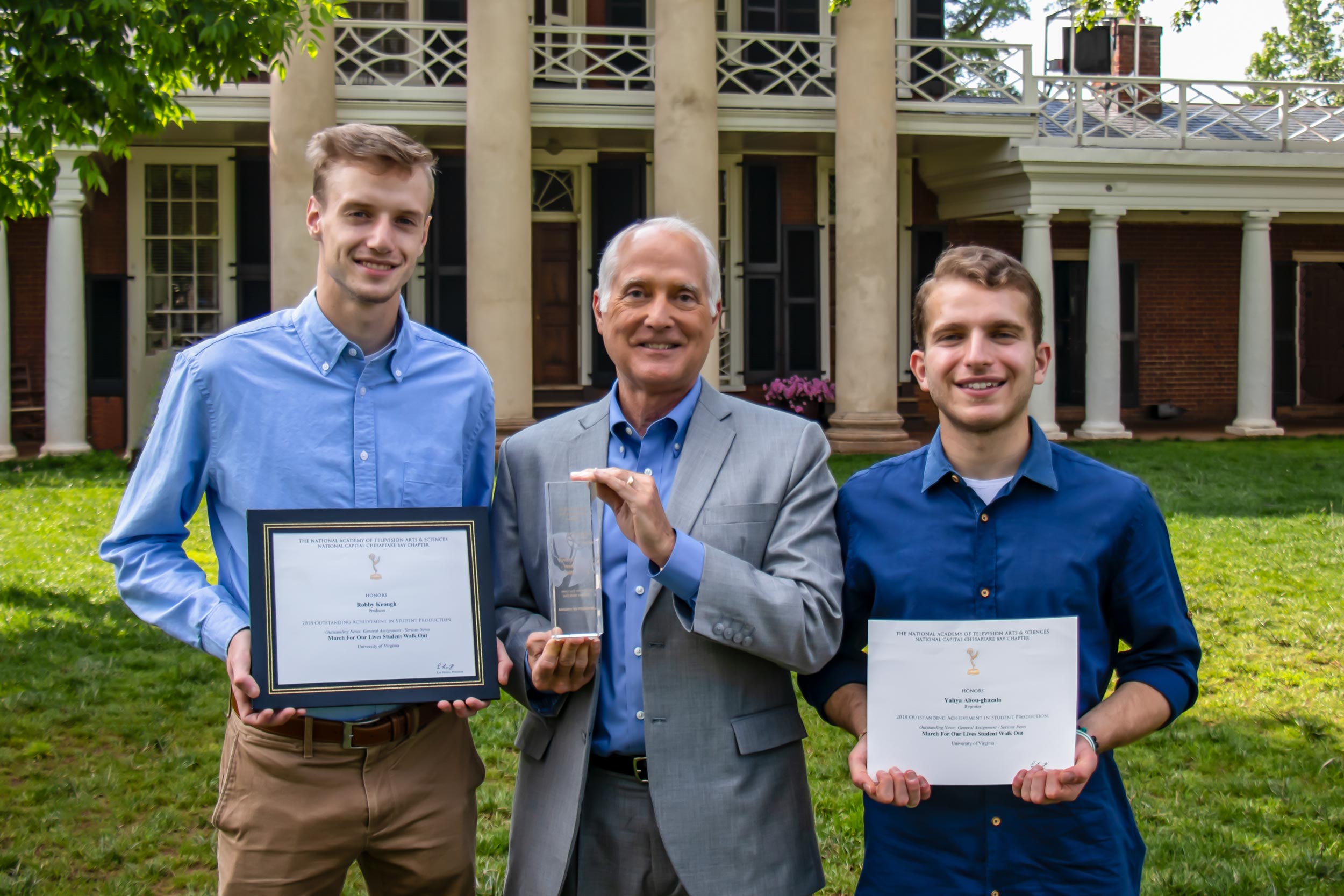 It began last year as a one-day, deadline assignment for their “Advanced Multimedia Reporting” course at the University of Virginia. Yahya Abou-Ghazala and Robby Keough, third-year students at the time, teamed up to line up interviews and map out a plan to cover the student walkout that drew hundreds of UVA students, faculty and other participants to the Lawn on March 14, 2018, one month after the fatal shootings of 17 students and staff members at Marjory Stoneman Douglas High School in Parkland, Florida.

The seven hours that Abou-Ghazala and Keough spent covering and producing a video report of the rally – one of thousands of planned protests across the United States that day calling for an end to gun violence in schools – rivaled the news reports prepared by more seasoned, professional media teams.

As they prepared for graduation this spring, they learned that their 1-minute, 52-second video report from that day had earned them the first Student Emmy Award given to a UVA student.

First aired by WUVA News, the report won one of the four “General Assignment–Serious News” student Emmys awarded to college journalists in March by the National Capital Chesapeake Bay chapter of the National Academy of Television Arts and Sciences. The other three awards in that category went to reporting teams from the University of Maryland’s Philip Merrill College of Journalism.

Competing primarily against student reporters from four-year journalism programs in Maryland, the District of Columbia and Virginia, Keough and Abou-Ghazala said they were surprised to hear about their award. At the same time, they felt that the lessons they’d learned over two semesters in reporting seminars taught by Wyatt Andrews, a professor of practice within the Department of Media Studies and an award-winning CBS News correspondent with more than three decades of television reporting experience, had prepared them well for the deadline challenges of covering the “March for Our Lives” rally.

“Robby and I were exposed to all of the essential training we needed through Wyatt’s class,” said Abou-Ghazala, who graduated Saturday from UVA with a degree in global development studies. “That’s where we learned script-writing, production elements, interviewing techniques … all of that came through the two-part course. It’s like J[ournalism]-school in a year, and this deadline-day piece was a crash course where all of those skills really come to life.”

While Abou-Ghazala served as the primary reporter for the project, Keough served as the videographer and producer. There was significant overlap in their duties over the course of the day, in terms of collecting video footage from the Lawn and conducting interviews, and obtaining video footage from similar rallies across the country to be woven into their WUVA report.

“We work well together,” said Keough, who began working in video production as a ninth-grader in Atlanta. A former middle-distance runner for UVA’s track and field team, Keough worked as a student employee for UVA’s multimedia team before graduating Saturday with a degree in media studies. “We know our strengths and weaknesses. Yahya handles the research, and I handle the editing,” he said.

One of the most difficult parts of filming the story was trying to avoid being a participant, Keough said.

“Because news has to be unbiased, and when we were filming the event, there’s always an urge to participate versus actually getting the shot,” Keough said. “You can feel very nosy when you’re putting a camera in someone’s face who’s trying to protest or mourn or do anything that requires raw emotion.”

In preparation for the deadline reporting assignment each semester, Andrews shows his students award-winning videos produced by student journalists from other universities with journalism programs.

“Up to now, these awards have been dominated by schools that are four-year undergraduate journalism schools, and that’s what makes the accomplishment of these young reporters so spectacular,” said Andrews, a 1974 UVA graduate who joined the media studies faculty in 2016 after his retirement from CBS News.

Andrews shared in the Columbia/DuPont Silver Baton Award presented to “CBS Evening News” in 2014 for its coverage of the mass shootings at Sandy Hook Elementary School in Newtown, Connecticut. He also won three Emmys during his CBS career for his coverage of the 1984 assassination of Indian Prime Minister Indira Gandhi, the 1986 Reagan-Gorbachev summit in Reykjavik, Iceland and the 2003 Washington, D.C. sniper case.

“I’m not an advocate for having a journalism department at UVA. I think we have the mix right, in that we have a media studies department, and we teach journalistic skills,” Andrews said. “But in that context, it’s remarkable how Yahya and Robby, as young reporters, competed against the very best TV journalism students for this award.”

Following their graduations from UVA, Keough and Abou-Ghazala are moving to opposite coasts to pursue their professional media ambitions. Abou-Ghazala, who grew up in Fairfax, is moving to Washington, D.C. to begin an internship with CNN’s video news team. Keough is moving to Santa Cruz, California to work with Evergrain Studios, a documentary film production company.

“We don’t have a journalism school here, but it fostered a sense of community in that we knew we were doing some quality work here, and we felt like we could compete with the biggest schools in the country,” Abou-Ghazala said.  “That’s why Wyatt pushed us to apply for the Emmy, to show that while our training comes from a two-part class here, we’re putting out work that is up there with some of the biggest J-schools in the country.”