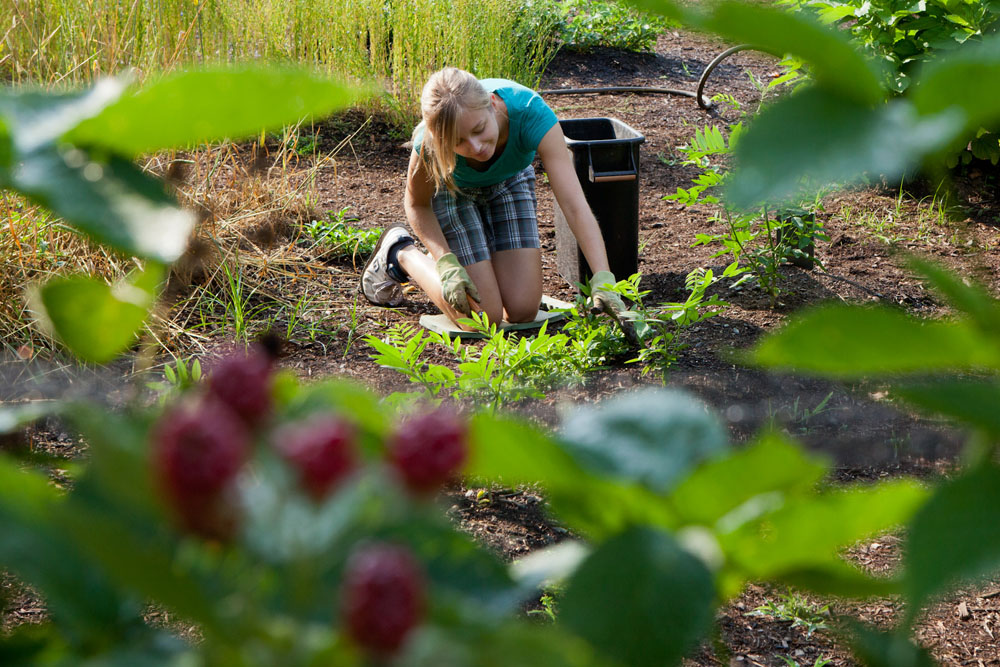 In the hot afternoon shade, Lily Fox-Bruguiere ties a drooping sunflower to a stake with green ribbon. It is the Monday after a severe windstorm ripped through the mid-Atlantic states, downing many a plant, tree and power line, and in the Thomas Jefferson Demonstration Garden there is work to be done. Besides the sunflower Fox-Bruguiere works to revive, other once-tall plants like cornstalks and Jerusalem artichokes will need to be staked in the next few days.

The Thomas Jefferson Demonstration Garden is not any ordinary garden: All the plants being grown are ones that Jefferson documented as "useful," and include varieties used in the production of food, textiles, medicine and dyes. Located at the University of Virginia's Hereford Residential College, the teaching garden, modeled on traditional 17th- and 18th-century garden designs, seeks to show people the continued importance of plants through Jefferson's own botanical vision for his University.

The garden began in February 2011 after Fox-Bruguiere and co-founder Rachael Dealy Salisbury approached Nancy Takahashi, a lecturer and chair of the landscape architecture department in the School of Architecture  and principal of Hereford Residential College, with an idea for a historically based garden. Fox-Bruguiere, who attended U.Va for both her undergraduate and graduate studies, holds an M.A in architectural history and is currently the coordinator for the Thomas Jefferson Center for Historic Plants at Monticello.

The demonstration garden is inspired by her master's thesis on Jefferson's plans to establish a botanical garden on Grounds. Fox-Bruguiere explained that before Jefferson's death in 1826, he wrote of his intention to establish the garden on the slopes of the Academical Village, where students and faculty could learn side-by-side how to become self-sustaining.

"We are continuing in Jefferson's desire for a teaching garden on Grounds," Fox-Bruguiere said. "This was the culmination of Jefferson's passion for plants."

The Thomas Jefferson Demonstration Garden's location further emulates Jefferson's original goals, Fox-Bruguiere said. As in the Academical Village, Hereford College's students and faculty live and learn together. The garden, which is about a tenth of an acre in size, has fostered further student-faculty collaboration through garden-based courses, workshops and internships. The first seeds for the garden were even sown by students participating in a Hereford short course, "Gardening in Winter."

The garden offers a lesson in sustainability – a focus shared by both Hereford College and Jefferson, Fox-Bruguiere said. Jefferson believed that an independent nation needed to be self-sustaining and that natural resources such as "useful" plants were invaluable. Today, Hereford's initiative to be an environmentally responsible, self-sustaining community reflects Jefferson's ideas as well as embodies the modern food movement.

The demonstration garden seeks to share this message of sustainability and the "continued importance of plants" with not only the University community, but also with the greater Charlottesville community, Fox-Bruguiere said. Tours of the garden highlight native Virginian plants and their many different natural properties.

"People are learning not through a book, but through hands-on experience," Takahashi said.

Kari Ann Roynesdal, a rising second-year student and one of the garden's three summer interns, has helped lead several tours of the garden already this summer, including groups from the Historic Landscape Institute, a joint venture between U.Va. and Monticello, and local third- through fifth-grade students. She tells visitors about the garden's foundation in Jefferson's vision and about the varying plants' roles in certain types of production, such as flax fibers in making linen. The visitors observe and interact with the array of plants, which include field crops such as wheat and corn, as well as vegetables and cultivated and wild herbs.

Curiosity about the unique garden is not restricted to official tours, though. "Almost every time I'm working in the garden, somebody – a jogger or biker – will stop and ask me about what I'm doing," Roynesdal said.

At the end of a growing season, there is usually not enough food for a meal, Fox-Bruguiere said, though what they do harvest they do not waste, either donating the food or eating it themselves. "We also save our own seed," she said, adding that all the cotton planted this summer came from the seeds of last year's crop.

Between the intense heat and violent thunderstorms, this summer has been a challenge, Fox-Bruguiere said, though not an unwelcome one. Already the gardening team has drawn up plans for staking all the tall plants for support and hopes to publish a guidebook to the garden that will explain in more detail the importance of each plant.