Detecting Domestic Violence by Computer: How Well Does it Work? 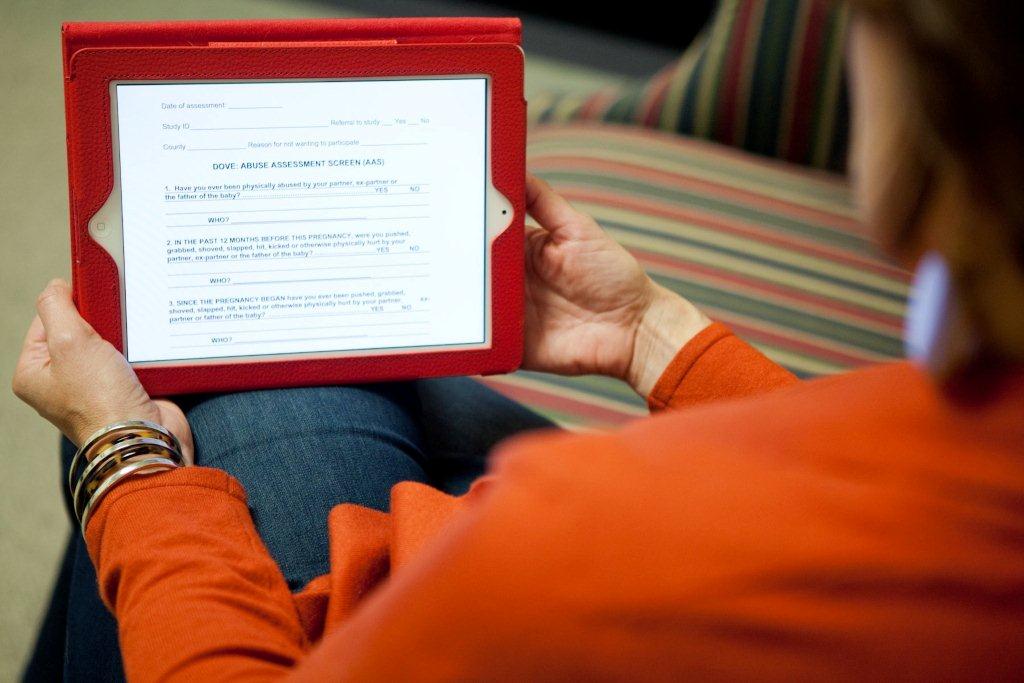 Are pregnant women more likely to report violence at home to a querying clinician or to a computer? And if a computer yields a truer picture of abuse patterns, how dramatic and reliable is the effect?

Those are the questions being asked by University of Virginia School of Nursing professor Camille Burnett, who’s received a $321,000 minority supplement grant from the Eunice Kennedy Shriver National Institute of Child Health and Human Development, one of the National Institutes of Health. Burnett’s work will fully evaluate the effect of a high-tech domestic violence screening tool developed by School of Nursing colleague Linda Bullock in 2012.

Bullock, associate dean for research and the Jeanette Lancaster Alumni Professor of Nursing, has spent the last two years developing the high-tech screening device and training home visiting nurses to administer it to more than 4,000 at-risk pregnant women in rural and urban Virginia, Baltimore and Missouri. Bullock and her Johns Hopkins University research partner, Phyllis Sharps – recipients of a $4 million NIH grant for this work in 2012 – await Burnett’s analysis before making their final practice and policy recommendations about how to best support pregnant women at risk for abuse.

At the outset of their DOVE study – a rough acronym for “domestic violence enhanced home intervention” – Sharps and Bullock hypothesized that the use of mobile tablets would increase the number of women who identify themselves as victims of abuse by as much as a third, opening a conduit for appropriate interventions to improve their situations. Burnett’s analysis and follow-up will, the trio believes, offer definitive positive evidence of that effect, as well as new information about the best way to help pregnant women and their children who are at risk for abuse.

With her two-year grant, Burnett will conduct a quantitative and qualitative analysis of the DOVE intervention, interview its administrators and the women who use the intervention in order to provide valuable feedback for Bullock and Sharps. She will also share her analysis with policymakers who will, with $1.5 billion in funding for visiting nurse programs and prenatal care from the Affordable Care Act, determine the best ways to support abused women and their unborn and small children.

“Camille’s work is critical to our collective success,” Bullock said. “With her careful analysis fortified by metrics, we believe we’re on the right path to making a difference for our nation’s most vulnerable women, who, with their unborn and small children, are at great risk of abuse.”

What’s Next for UVA’s Class of 2022? END_OF_DOCUMENT_TOKEN_TO_BE_REPLACED