Dinner with Julian Bond Is More Than a Good Meal 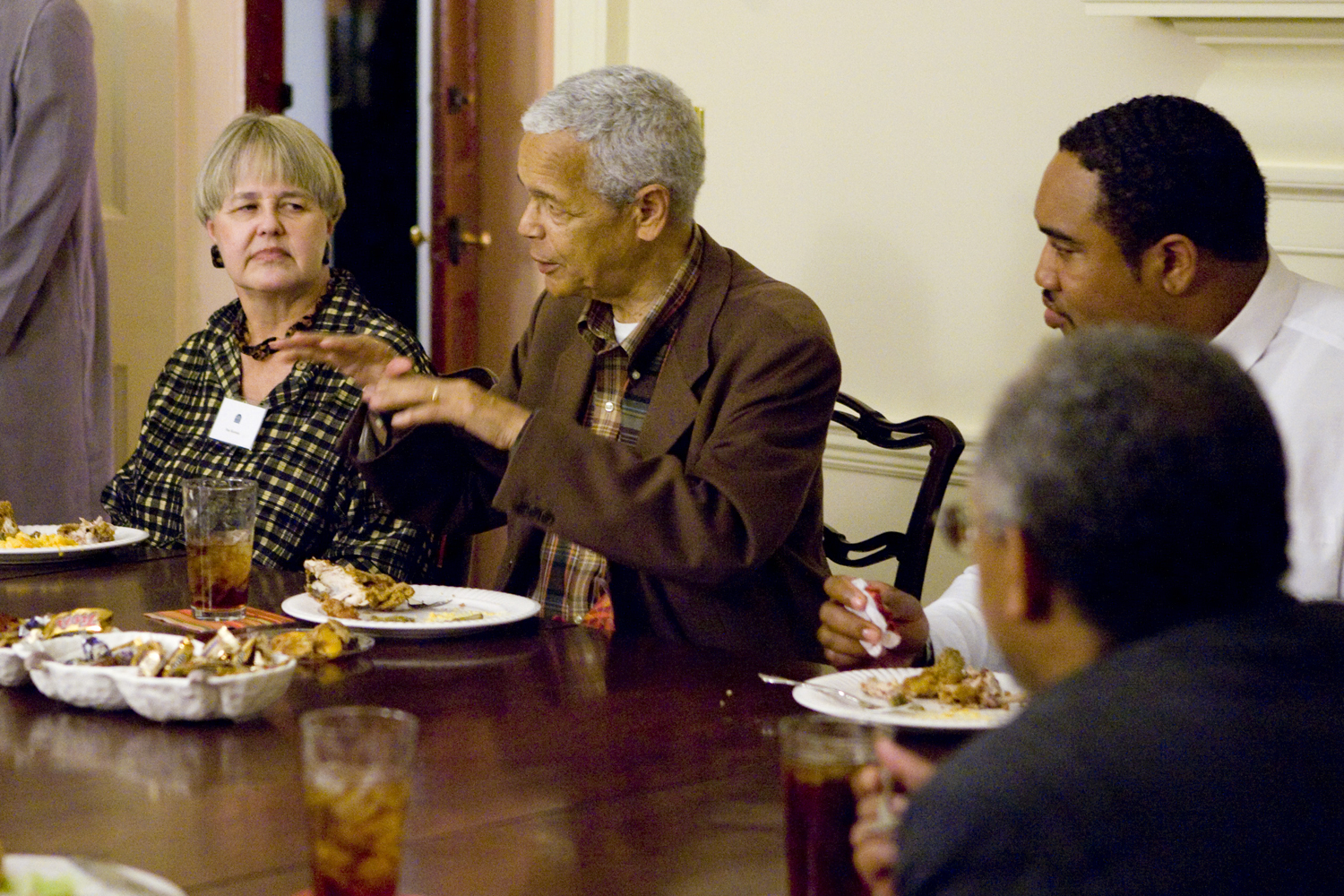 November 18, 2010 — Julian Bond was among the first protesters "sitting in" at whites-only lunch counters when he was a college student in the early 1960s. Nearly a half-century later, Bond has become the guest of honor at special dinners at the University of Virginia.

The dinners, sponsored by U.Va.'s Office for Diversity and Equity, bring together Bond – who teaches history in the College of Arts & Sciences – with students, faculty and staff members. The gatherings, held about five times per semester in the historic pavilions of the Academical Village, other locales on Grounds or professors' homes, offer an opportunity to celebrate diversity at U.Va. About 1,000 attendees have sat at dinner tables with Bond, and each group comprises people from across the University.

In elegant yet informal settings, approximately 20 guests attend each dinner, which is spiced with conversations featuring Bond, who talks about not only his involvement in the Civil Rights Movement, but also his years in the Georgia legislature, in the NAACP and in classrooms at U.Va. and American University, where he also has a faculty appointment.

Because Bond lives in the D.C. area and spends only one day a week in Charlottesville on a regular basis, the diversity office stepped in and hosted the first of what have added up to 47 dinners since 2007. His wife, Pam Horowitz, a civil rights attorney, also attends.

Bond said dinner guests often ask him if he knew Martin Luther King, which he answers in the affirmative. He said he likes to tell people that King wasn't always serious.

"He was different from his TV appearances, where he was always speaking. He could be funny, humorous or teasing in a friendly way," Bond said.

The conversations often turn to Bond's firsthand knowledge of the Civil Rights era.

"I tell them the people who made the movement were ordinary people – they were sanitation workers, sharecroppers, teachers, students, maids, lawyers – who for one reason or another, were called to extraordinary moments. And I'm glad they were."

Earlier this month, Curry School of Education Dean Robert Pianta hosted the last dinner of the fall semester in his pavilion on U.Va.'s historic Lawn.

"I have now had the great pleasure of hosting two dinners with Julian Bond in our pavilion," Pianta said. "I had not met Mr. Bond prior to these dinners and to have the opportunity to engage with him on the issues of the day and listen to his perspectives and experiences has been nothing short of extraordinary.

"I am struck as well by Mr. Bond's generosity in making himself available to the University in this way. It's clear that faculty find these dinners energizing and that the opportunity to meet Mr. Bond is a major source of their attraction to coming together," said Pianta, who has been at U.Va. for 24 years.

One student wrote a thank-you note "for giving me the lifetime opportunity to dine with a living legend." (Bond, in fact, was named a "Living Legend" by the Library of Congress several years ago.)

Dinners also have been held at Hereford College and the W.E.B. DuBois Conference Room in the Office of African-American Affairs.

"I traveled with Julian and Pam during the first Civil Rights Tour of the South and had a wonderful experience. Since then I have gotten to know them well," said Dr. Marcus L. Martin, interim vice president and chief officer for diversity and equity.

"Ninety-three percent of those who attended and provided post-event feedback either agreed or strongly agreed that the dinner provided an opportunity for relationship- building. The objective set forth by Bill Harvey, my predecessor, and Julian Bond since the first dinner in January 2007 is being consistently met."

The guests are usually individuals who haven't necessarily had many opportunities to mingle with others they don't work or study with.

"In any university community, there's a wide variety of people who can get segregated in their silos," said Bond, referring to academic disciplines and departments. "But a lot of collaborations and friendships have come out of meeting at one of the dinners."

"This event was an excellent opportunity to network and meet people from all over the U.Va. community that I would otherwise never have met," wrote one participant in the follow-up survey. "I gained a new understanding and awareness of the work of and interests of many people there. The atmosphere was relaxing and quite welcoming."

Should Alcohol Have Warning Labels About Cancer Risk? Most Americans Say ‘Yes’ END_OF_DOCUMENT_TOKEN_TO_BE_REPLACED