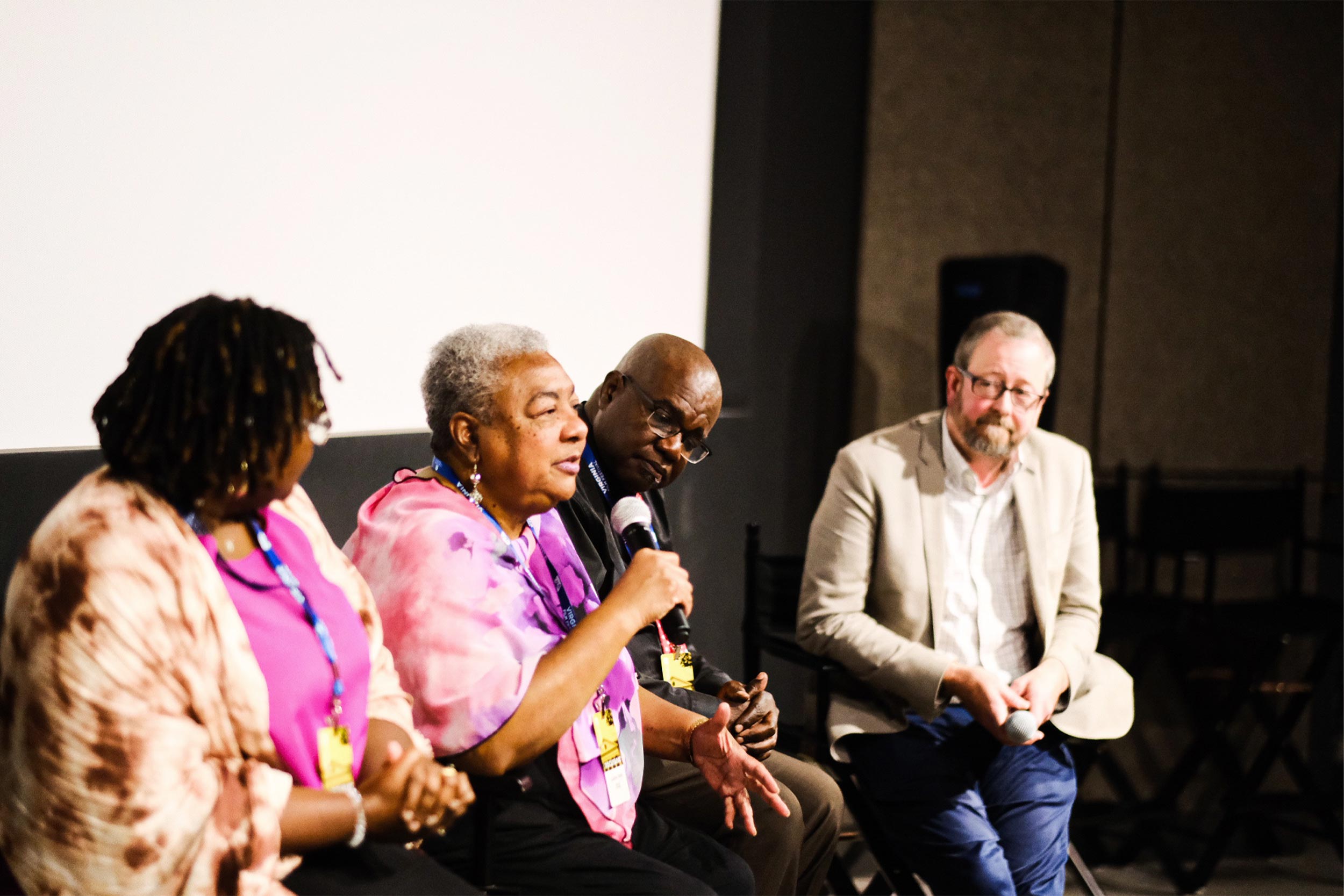 Several people in the film, “The Lives Between the Lines,” discussed their participation in the creation of UVA’s Memorial to Enslaved Laborers: left to right, DeTeasa Gathers, Cauline Yates, Mike Spence and Kirt von Daacke. (Photo by Eze Amos)

The story told in the documentary, “The Lives Between the Lines,” brings together the persistent voices of student activists, the painstaking research of scholars, the careful planning of designers and the crucial participation of community members – all collaborating to create the University of Virginia’s Memorial to Enslaved Laborers.

Directed by Charlottesville filmmaker Erik Duda, with a cast of others contributing to the production and participating to talk about the process and UVA history, the documentary premiered Sunday at the Virginia Film Festival.

A question-and-answer period afterward featured several people in the film: Cauline Yates and DeTeasa Brown Gathers, residents who are members of the Descendants of Enslaved Communities at UVA; Mike Spence, superintendent for general contractor Team Henry Enterprises that oversaw construction; and moderator Kirt von Daacke, UVA history professor and co-chair of the UVA President’s Commission on Slavery and the University, now leading the subsequent Gibbons Project.

Spence said it was the job of a lifetime to work on building the memorial, “something that’s a living force … a piece of love being given back to the community.”

While working at the site, Spence would regularly talk to curious passersby – some of whom were studying or working at UVA and others who were visiting, sometimes convincing them why such a memorial should even be built.

“Being Black in this country is not an easy thing,” he said, “but thanks to my parents, I never saw myself as less-than.”

“Don’t let anyone steal your joy,” his mother also would tell him.

But he turned to Yates sitting next to him on the panel as he recounted another emotional reason for honoring the enslaved laborers through his role as superintendent of the construction project.

“I’m building this for you,” he said, meaning the descendants who would finally see their ancestors get the recognition they deserved.

Yates, who is descended from both UVA’s and Monticello’s enslaved communities, said it still brings her tears of joy to see her ancestors honored as the memorial became reality, despite the painful history behind it. During the planning, she served on the Memorial to Enslaved Laborers Community Engagement Committee, a crucial part of the process. She pushed for it to be built in a prominent place on Grounds, she said.

The circular memorial, made of local Virginia Mist granite, sits within the UNESCO World Heritage site of the Academical Village. The rising wall is inscribed with more than 575 names of enslaved men and women who lived and worked on Grounds, along with 311 phrases indicating someone’s kinship or occupation, such as “grandmother” or “stonecutter.” Researchers estimate that at least 4,000 more names of those enslaved on Grounds remain unknown, represented on the memorial by 4,000 dark gashes in the stone.

“It was time,” Gathers said, “to unearth the history beneath our feet and to bring the community back” to see the resilience of their ancestors. Also having joined the community engagement committee, Gathers said she is committed to the work of descendants spreading the word about this history.

In 2013, then-President Teresa Sullivan appointed the President’s Commission on Slavery and the University, charging it with pursuing the idea to recognize those who helped build and maintain UVA in its early years through research, education and memorialization.

The UVA Board of Visitors selected the Boston-based firm Höweler+Yoon Architecture to design the memorial. The memorial has garnered attention and awards along the way. In 2020, Architect’s Newspaper selected the Memorial to Enslaved Laborers as the Project of the Year in its Best of Design Awards and also named it the best in the category of public space and social impact.

As part of the planning process, in fall 2016, the Höweler+Yoon firm worked with UVA’s Office of the Architect and a team comprising Mabel O. Wilson, a UVA School of Architecture alumna and a professor of architecture and African American studies at Columbia University; Frank Dukes, co-founder of University & Community Action for Racial Equity and past director of the Institute for Environmental Negotiation in the UVA School of Architecture; and Gregg Bleam, a landscape architect who taught at UVA and worked in and around the Grounds for about 30 years. Artist Eto Otitigbe from Brooklyn, New York, designed the artwork of the exterior wall that depicts the eyes of Isabella Gibbons, a former enslaved cook who became a local schoolteacher.

The design team held several meetings, leading discussions with UVA and community members, asking them what they wanted to see in a memorial.

Construction concluded early in 2020, but the dedication was delayed due to the COVID pandemic until the following year. The ceremony was held virtually and in person with social distancing.

Audience members at Sunday’s documentary screening noted how powerful it was to see the film.

Andrea Copeland, who serves on the Virginia Film Festival’s Diversity, Equity and Inclusion Committee, said she had watched the progress of the memorial being built, but the film brought home the hard work that went into its planning and design, including the community’s contributions.

Retired Rev. Carol Carruthers Sims remembered spending a lot of time on Grounds, as her grandfather was the UVA bursar in the mid-20th century. As a child, she often interacted with Black employees, until being discouraged by white adults, even though her mother was a civil rights advocate, she said. It was “very meaningful” to learn how much went into correcting UVA’s history, she said of the film.

The memorial itself has been the site of several gatherings, including a medical event in June 2020, “White Coats for Black Lives,” held to commemorate George Floyd and support the national movement for racial justice. Since then, the descendants’ committee also has met at the memorial as part of its meetings.

Prentice Brown, another audience member, said the existence of the memorial goes a long way toward changing the University’s reputation among the African American community.

“I can’t wait to see what comes next,” she said.