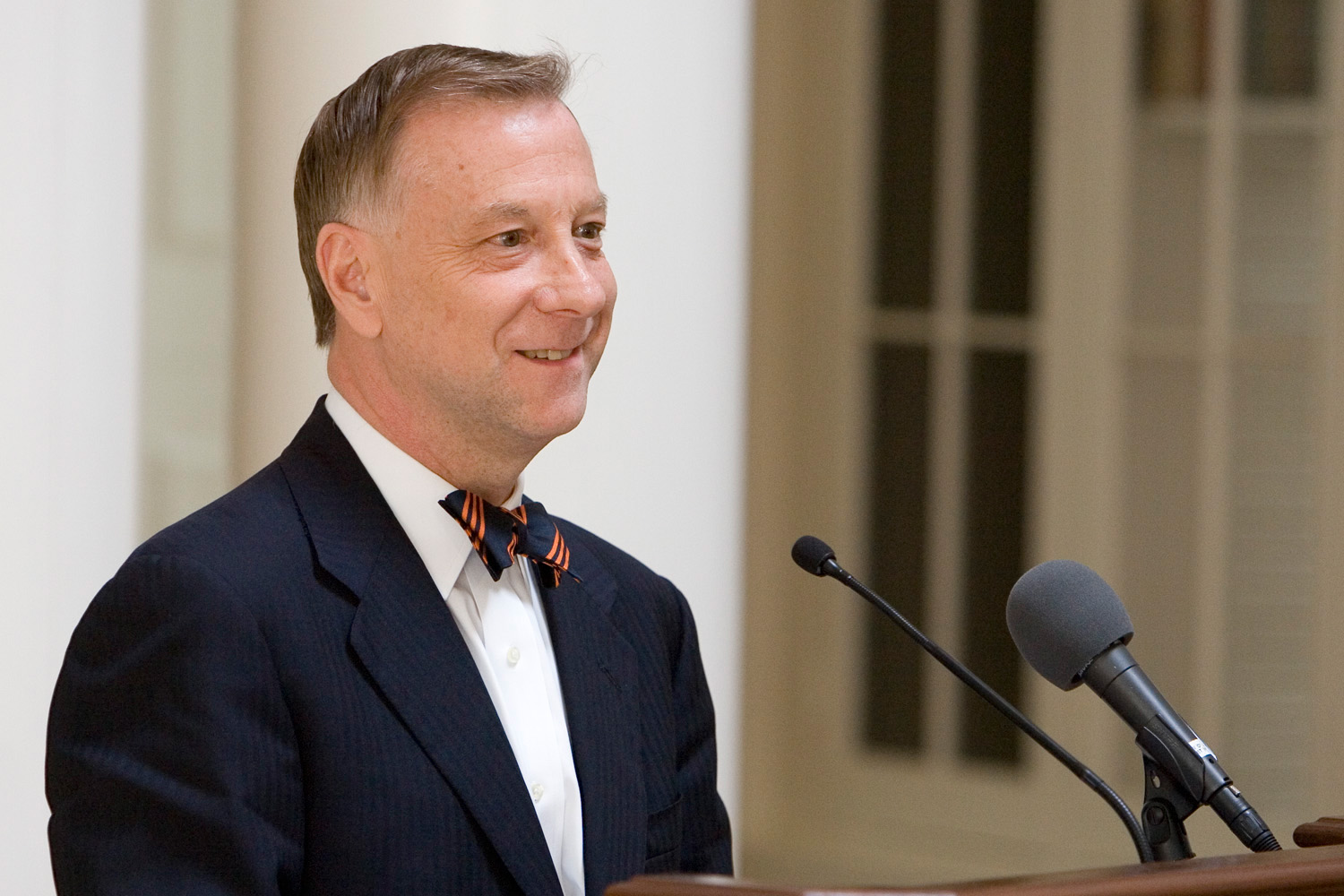 April 27, 2007 -- Dr. Arthur “Tim” Garson Jr., an internationally recognized pediatric cardiologist who has served as vice president and dean of the University of Virginia’s School of Medicine since 2002, today was named executive vice president and provost, effective July 1, 2007.

University President John T. Casteen III, who made the announcement at a gathering of deans and the Faculty Senate in the Dome Room of the Rotunda, praised Garson as a teacher, researcher and administrator. “Tim Garson's leadership of the medical school, in particular his work on the Health System’s strategic planning effort, has been outstanding. He is a unique blend of visionary and strategic planner. As co-chair of the Commission on the Future of the University, Tim has already immersed himself in a study of both the challenges and the opportunities the University will encounter as it approaches the 200th anniversary of its founding.”

Garson, the James Carroll Flippin Professor in Medical Science, will succeed Gene D. Block, a biologist who has been vice president and provost since 2001. Block will become chancellor of the University of California, Los Angeles this summer.

“Over the past few months,” Garson said, “I have worked with the most talented people I have ever met — faculty from every corner of the University — collaborating on the Commission. The theme of our 10-year plan is ‘further distinguishing the University,’ and one of my major goals as provost will be to help implement that plan and to lay the groundwork for future achievements.”

Garson said he is looking forward to working closely with Casteen and members of the Board of Visitors in creating a new vision for the University and for higher education. “We plan to examine all aspects of academic life — from advising students and classroom teaching to research, faculty development and service to the commonwealth and the nation.”

Garson’s hope is that others will begin to look to the University of Virginia for inspiration. “We believe Jefferson had this in mind when he described the University as a ‘blessing for my own state and not unuseful to some others,’” Garson added.

In addition, he will be responsible for foreign study, teaching and research at the University, and he will serve as principal staff for the Board of Visitors Committee on Educational Policy, which governs all of the University’s academic programs.

Along with Casteen, his cabinet and the deans, Garson will be charged with shaping academic policy, providing leadership for academic innovations and interdisciplinary initiatives and seeking philanthropic support for the $3 billion Campaign for the University of Virginia.

During Garson’s tenure as dean, the School of Medicine started a Master of Public Health program (MPH), the Academy of Distinguished Educators, the Center on Health Care Disparities, the Patient Education Institute and the Institute for Translational Research (a joint effort among several schools). Plans are under way for two laboratory research buildings, a medical education building, a clinical cancer building and a children’s hospital.

Garson continues to see pediatric cardiology patients, especially those with arrhythmias and fainting, and he teaches on rounds and in regular conferences on electrophysiology and cost-effectiveness. He teaches an introductory MPH health policy course.

Garson is known for his passion for health care reform. Just last year, he helped originate and draft the Health Partnership Act (S.2772), a bipartisan U.S. Senate bill designed to expand health care coverage to millions of uninsured Americans. The legislation would fund grants to states for innovations to improve coverage as well as health care quality and efficiency.

The author or co-author of eight books, including “Health Care Half Truths: Too Many Myths, Not Enough Reality,” published this month, Garson has also been a national leader in academic medicine and health care policy. He served as president of the American College of Cardiology in 1999-2000. As chair of the ACC’s task force on the uninsured, he led a broad coalition of physician and patient groups who worked on legislation for the uninsured. He is also a member of the ACC’s working group on systems to improve quality care.

Garson is a member of both the Institute of Medicine task force on rapid improvements in the health care system and the Commonwealth Fund task force on health insurance and the uninsured.

He was named to the White House Advisory Panel on Health System Improvement in 2001. In 2003, Secretary of Health and Human Services Tommy Thompson appointed him chair of the national Advisory Council of the Agency for Healthcare Research and Quality, and in 2004 he was named chair of the healthcare programs subcommittee of the Lieutenant Governor of Virginia’s Blue Ribbon Commission on Health Insurance and the Uninsured.

Garson is a member of the Institute of Medicine Committee on Disabilities and the Governor of Virginia’s Health Reform Commission. He has served on the Charlottesville Free Clinic Board of Directors since 2002.

In 1979, he completed a pediatric cardiology fellowship at Baylor College of Medicine and joined its faculty in 1985. He was named chief of pediatric cardiology in 1988. In 1992, he received a master’s degree in public health, specializing in health policy and health care finance, from the University of Texas in Houston and was recruited to Duke to be associate vice chancellor of health affairs. While there, he spent most of his time in health policy. Three years later he returned to Houston and became senior vice president and dean for academic operations at Baylor and vice president of Texas Children’s Hospital.

Garson, a native of New York City, and his wife, Suzan, are the parents of two daughters, both of whom expect to be elementary school teachers.

Class of 2020: Memories and Moments From a Long-Anticipated Celebration END_OF_DOCUMENT_TOKEN_TO_BE_REPLACED