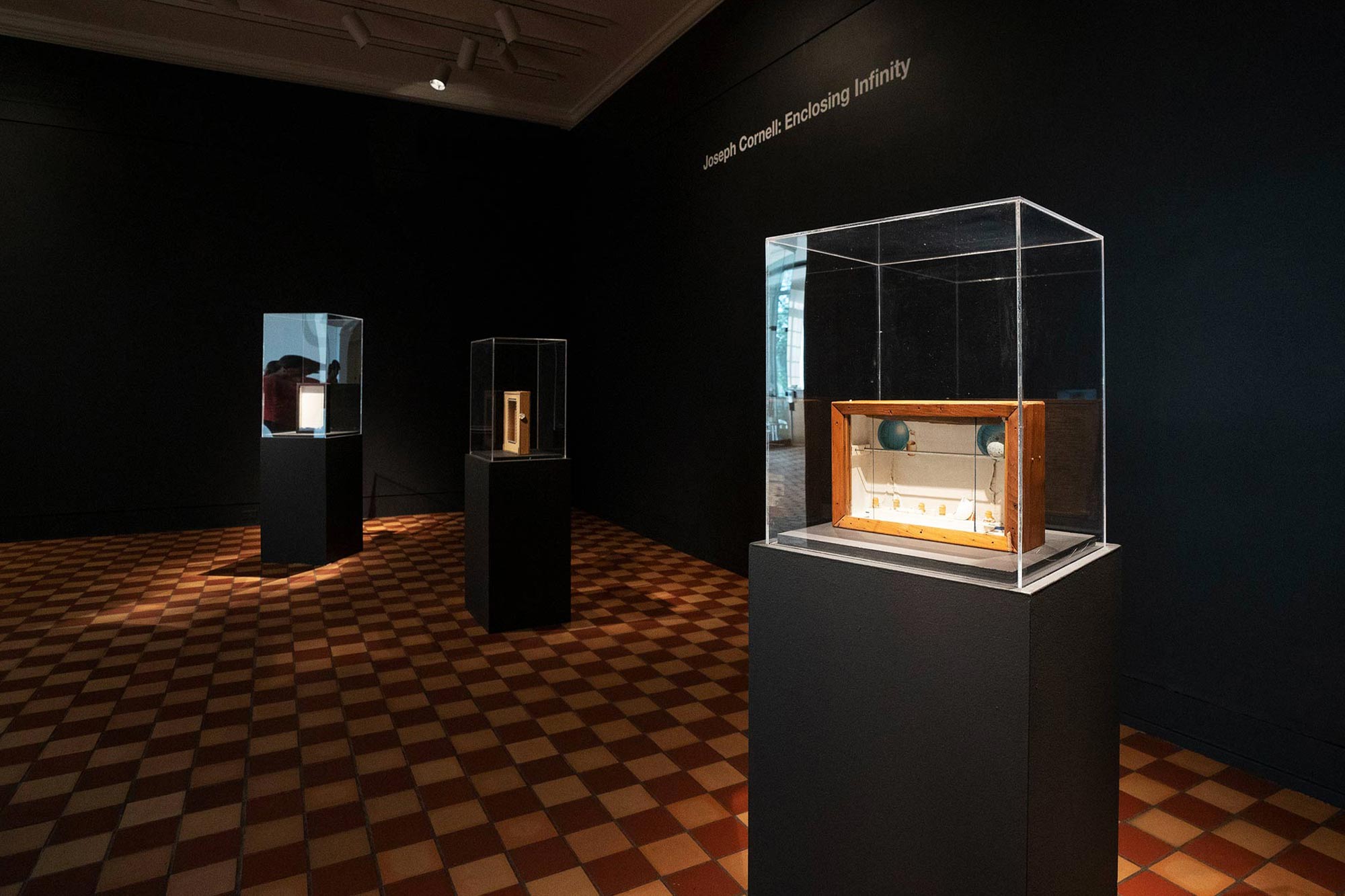 The Fralin Museum of Art is marking the 50th anniversary of artist Joseph Cornell’s death with an exhibition of his unusual works. (Photo by Dan Addison, University Communications)

The shadow boxes each contain a few items – a broken toy or a red rubber ball, a blue and white pottery shard or a row of tiny hooks, a seashell or a stone, tossed in a bed of blue sand or set with newsprint as a background.

Each box evokes fragments of dreams or summer memories, an alley far away or a carnival in the past, a trip in the imagination.

Joseph Cornell, an influential 20th-century American artist who died in 1972, used to wander around New York City where he lived, going to all kinds of shops – dime stores, used booksellers and secondhand shops – looking for small objects that struck his fancy or interested him in some way. He arranged them in wooden boxes, about the size of a shoebox, with other materials like sand, creating each one as if offering a small, mysterious world.

“He was a bit reclusive, but became famous in his lifetime with exhibitions in major museums around the world,” said Matthew McLendon, who has curated a special exhibition on display at the The Fralin Museum of Art at the University of Virginia.

Cornell’s creations are visible in several major cities across the U.S., especially New York, but right here in Charlottesville, visitors can view the six Cornell boxes donated to The Fralin’s permanent collection – including four donated from the Joseph and Robert Cornell Memorial Foundation – in a special exhibition, “Enclosing Infinity.”

Although Cornell also worked in collage and experimental film, he is best known for these box constructions, also called “assemblage” art.

“They’re the first things that come to mind, and we’re really fortunate at The Fralin to have six in our collection,” said McLendon, the museum’s J. Sanford Miller Family Director. “It just seemed the obvious choice when thinking about how to commemorate the 50th anniversary of his passing, to bring all of the boxes out together.”

The museum often displays one or two at a time, but from now until Feb. 12, all six will occupy a room all to themselves.

In a dramatically dark gallery, spotlights shine on each box, arranged so viewers can walk around the whole structure.

“Cornell is often referred to as an American surrealist, but he didn’t think of himself as a surrealist,” McLendon said, “although he was greatly influenced by, and very fond of, surrealism. His first exhibitions were in a gallery in New York that really brought surrealism to America. 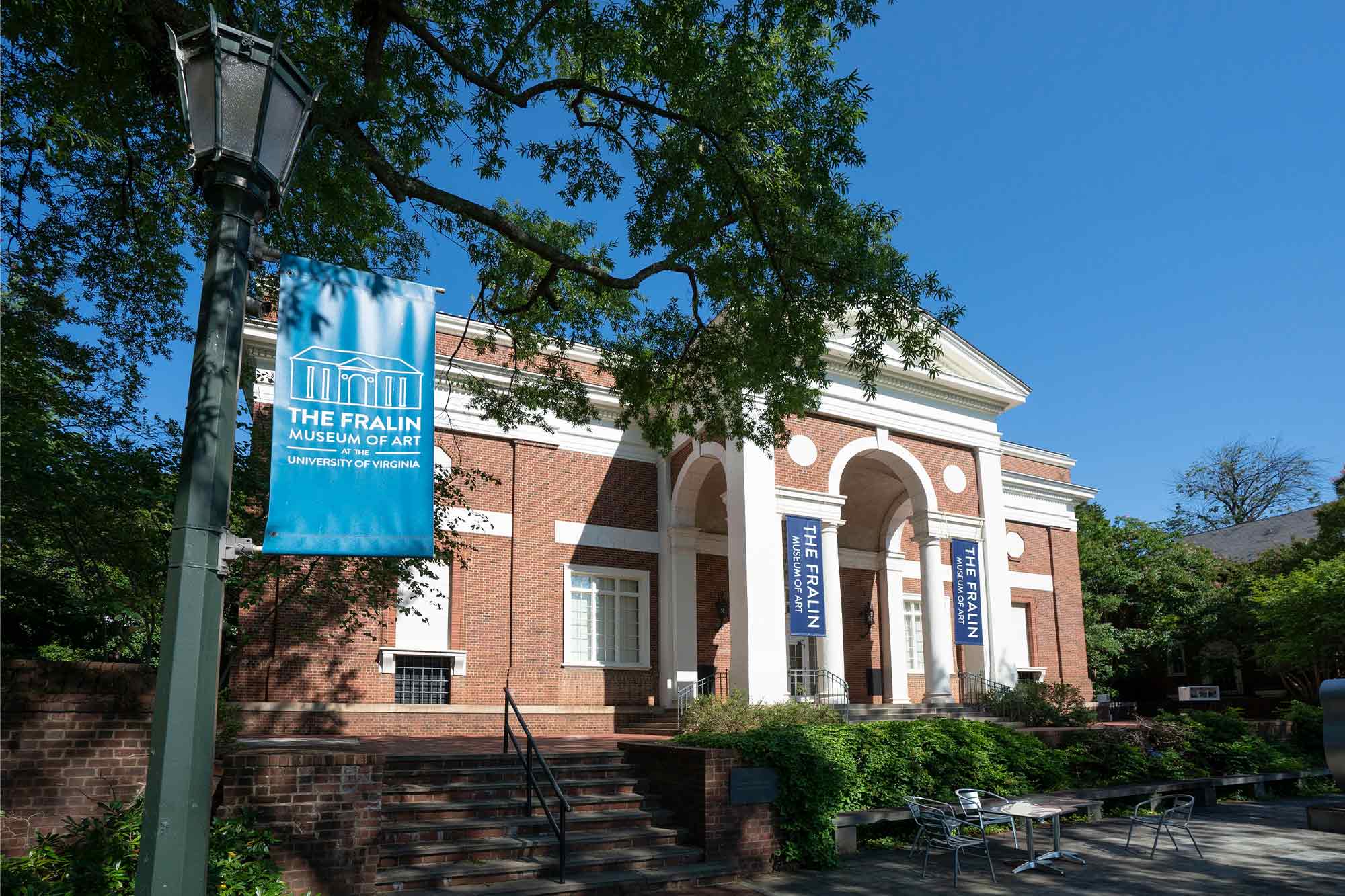 The Fralin Museum has six boxes from artist Joseph Cornell in its permanent collection, including four donated by the Joseph and Robert Cornell Memorial Foundation. (Photo by Dan Addison, University Communications)

“But whereas the surrealists were experimenting with automatic writing and unconscious practices, Cornell was really methodical and meticulous in how he approached his art. He had this basement studio filled with objects,” McLendon said. He has read in descriptions “how it was like this wonderful cabinet of curiosities, but all methodically and meticulously arranged and categorized and boxed.”

This deliberate process led to major groupings of some of his works, including the “Soap Bubble,” “Sand Tray,” “Games” and “Juan Gris” series, all represented in The Fralin’s collection.

Cornell’s boxes also suggest a sense of travel, although for most of his life he didn’t travel much. Besides his artistic adventures, he devoted time to caring for his mother and younger brother, Robert, who had cerebral palsy.

“A lot of scholars talk about the references to travel that you find in the boxes,” McLendon observed. “You get a sense of almost longing, but certainly mental travel. That’s one of the reasons we named the exhibition ‘Enclosing Infinity,’ because they are these opportunities to mentally travel as you peer into them.”

McLendon said Cornell “remains one of the most beloved and influential artists in America. He’s what we might call an artist’s artist. I talk to artists all the time, and when you ask them, ‘What artists influenced you or what artists do you find interesting?’ I’m always amazed how often Joseph Cornell’s name comes up.”