Driven to Serve: UVA’s Class of 2025 Brings a Love of Giving, Compassion to Grounds 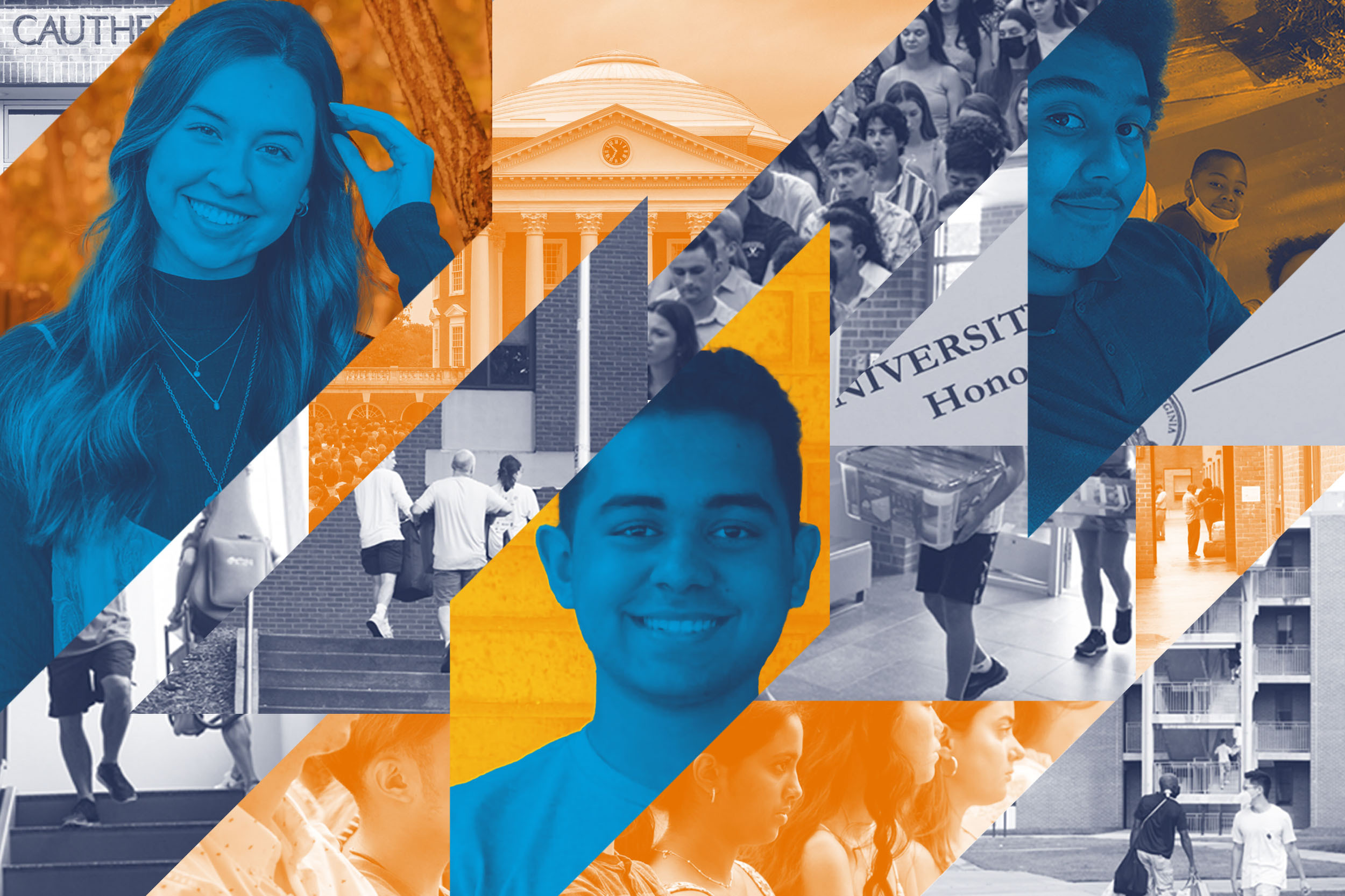 An astonishing 91% of first-year students performed community service – during COVID-19, mind you – before enrolling at the University of Virginia, a metric that begins to explain the DNA of the Class of 2025.

For Christopher Joseph, a son of Haitian immigrants, service meant helping support low-income families with young children by connecting them to free and discounted social services, including early education, in Florida.

For Lauren Espinoza and Arnav Wadehra of Virginia, that service took the form of free tutoring for students whose families could not afford to pay to give their children that crucial, extra support.

They and 3,916 other first-year students joined the UVA family this month. 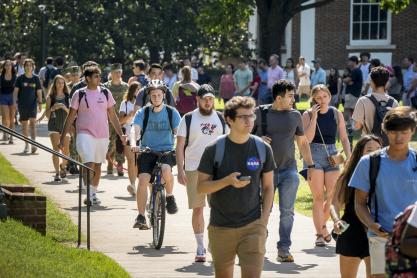 Photos: Back Together, Back in Class

Joseph, who moved into Watson-Webb House on Aug. 18, is a Questbridge Scholar. Questbridge is a national nonprofit that connects high-achieving, low-income students to universities around the country, providing full tuition and fees for students.

He arrived in Charlottesville on a plane from Palm Coast, Florida, on his own. Moving into college with the help of family is stressful in its own right. What could it feel like to make that huge transition on his own? 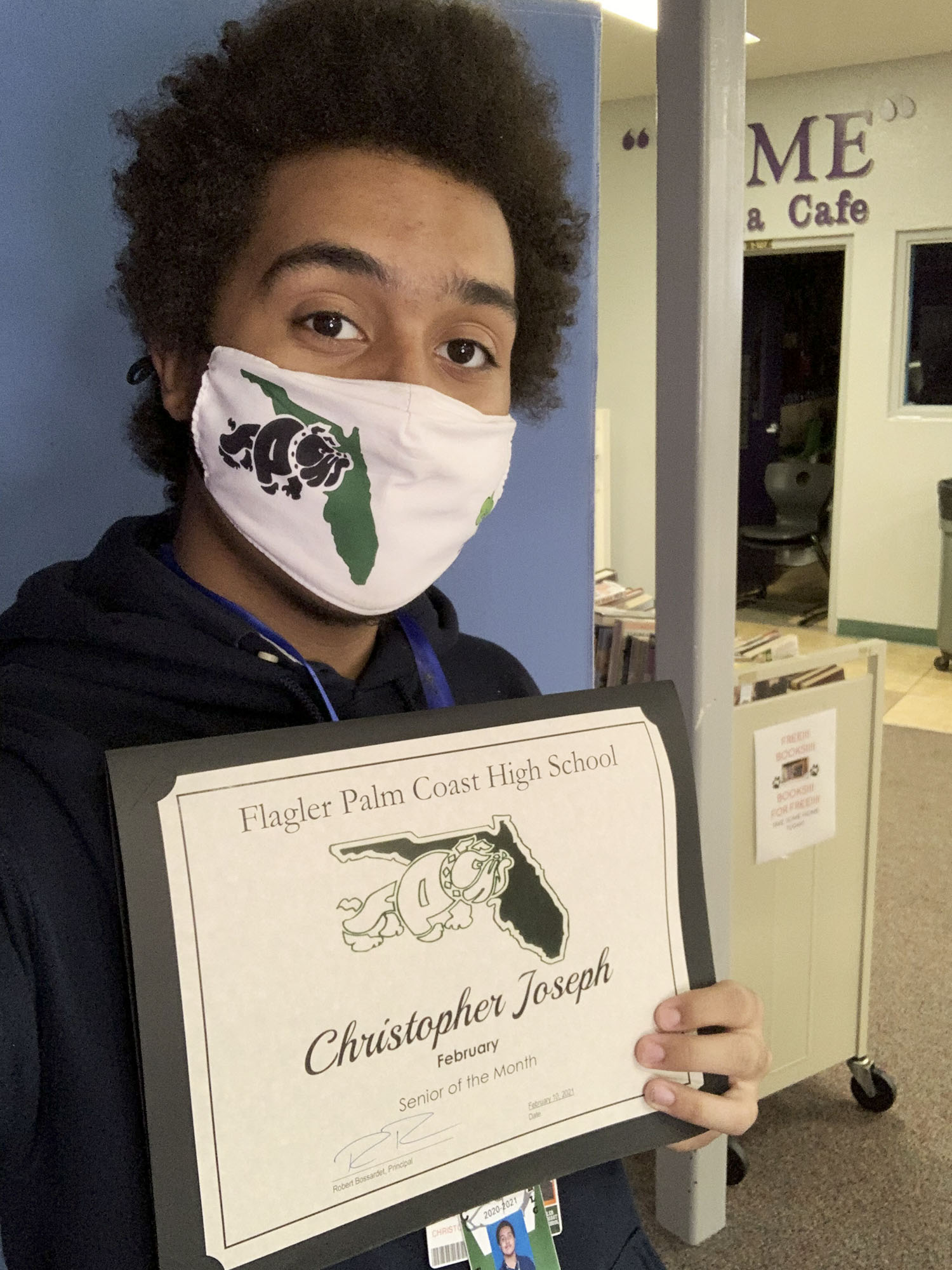 Christopher Joseph is a Questbridge Scholar and hails from Florida. (Contributed photo)

“To be honest, we didn’t really discuss it that much, but I didn’t want to burden them with 20 hours of driving,” he said. “I thought that the plane ticket would be a lot easier and a lot safer, because the longer you are on the road, I feel like, the more likely chance you might get in an accident, rather than being on a plane for a couple hours. And I ultimately, I just wanted to save [my parents] gas money as well.”

In addition to his volunteer work as a project leader with Love Engage and Direct, a group that helps connect low-income families with community resources, Joseph was invited to be an ambassador on Patio, a college chat app that has a subgroup for UVA’s Class of 2025.

In that role, Joseph started building a community even before arriving on Grounds. His task is to monitor the group chat, which has more than 2,300 members.

“I’m going to stay with the Patio app. Our next phase is to basically branch out to the other classes, like the Class of 2024,” he said.

Academically, although not “100% sure,” Joseph is looking at delving into engineering.

“I think mainly what I’m looking forward to academically is exploring a lot of new classes,” he said. “And we had a joke going around on one of the group chats on the app. I think it was about a class called ‘Defense Against the Dark Arts.’ I want to try that out sometime.”

listened to someone whose opinions differed from their own

changed their minds about an important issue

Lauren Espinoza of Leesburg is a first-generation student in the School of Nursing and the recipient of a University Achievement Award, which covers all of her tuition and fees.

She said chose UVA because she was looking for a program that would allow her to work in hospitals “immediately.” 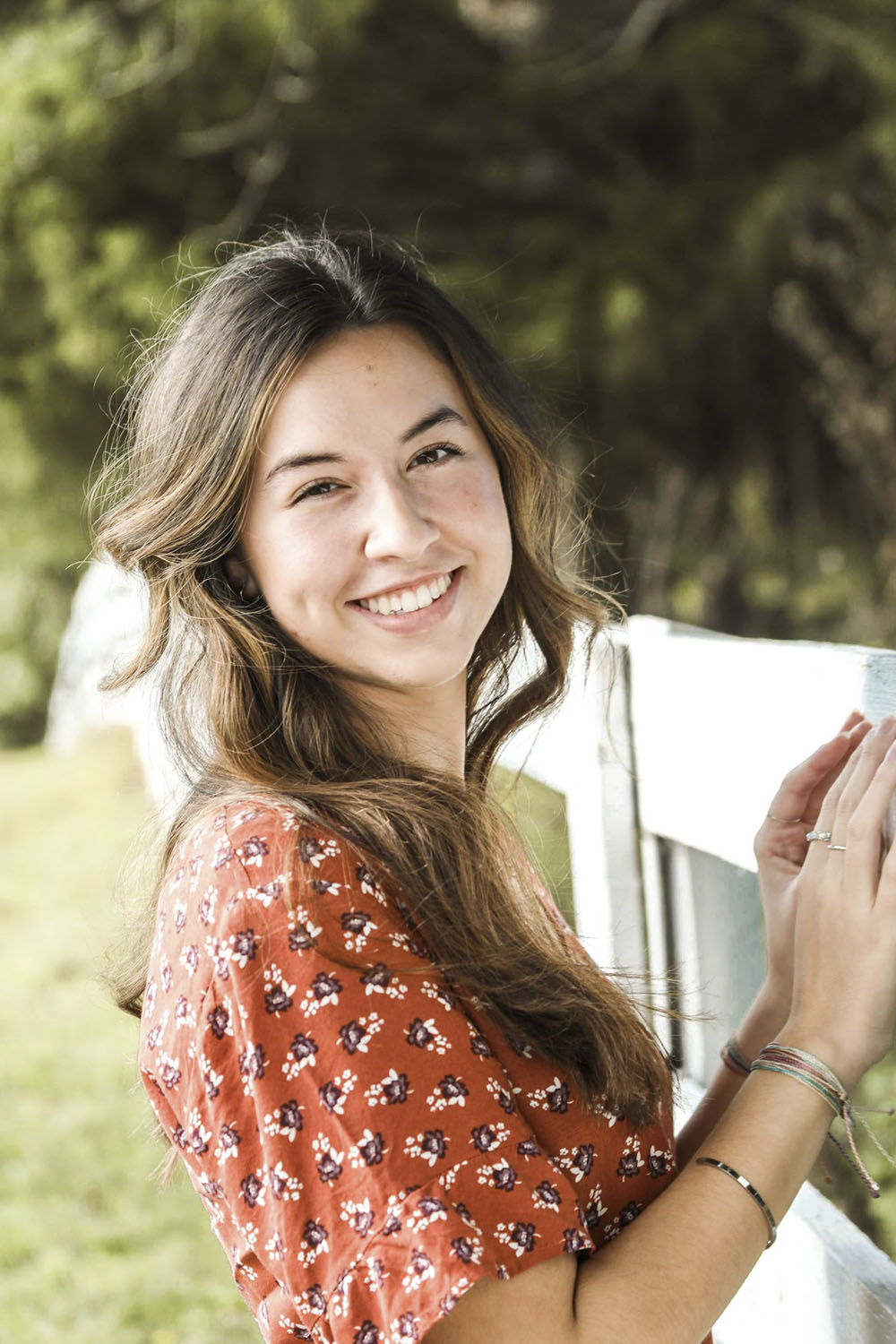 Lauren Espinoza is from Leesburg and is attending UVA’s School of Nursing. (Contributed photo)

“I also found that UVA, overall, is super supportive towards their students and they’re constantly evolving and changing to best support young adults in today’s age, especially with all the changes that are occurring in society constantly,” Espinoza said.

Since her freshman year of high school, Espinoza, who is skilled in German, has been tutoring children with learning disabilities.

“At first I started off as just a German tutor for our families that I knew. But one of them had autism, so it made it really difficult sometimes for him to concentrate on what he was learning,” Espinoza said.

With that experience, and because she likes working so much with children, Espinoza branched out and began working with two elementary-aged children who needed extra support.

“The mom had reached out looking for different tutors because both she and her husband were working all day and it was really hard for them to try and help their kids, because normally, they get extra aid from additional teachers in school. But because of COVID, they weren’t receiving that extra help.

“So, I would come over and I would help with simple tasks like homework and projects. And I would also help with things like handwriting, working on reading skills and comprehension, writing sentences, recalling events – all of the basic skills that you would need in elementary school,” she said.

Given the pandemic, going into nursing is a very weighted decision, but not for Espinoza.

“I have always been very keen on helping people, ever since I was younger,” she said. “And I just I love working with kids, which is why, once I graduate, I want to focus in the field of pediatrics, specifically nursing. I was quite the clumsy kid growing up, so I was constantly in the E.R. for mishaps or at the doctor’s for injuries and such.

“The experiences were always 10 times better because of the nurses and the care that they provided,” she said. “I want to bring about their support for other kids, so they don’t associate hospitals with a sort of negative connotation.”

inducted into an honor society

Arnav Wadehra of Vienna is a Jefferson Scholar, an esteemed designation available to top students only after a rigorous nomination and interview process. Jefferson Scholars receive scholarships covering full tuition and fees.

He is the executive director of GIVE Youth, a role that grew out of weekend tutoring that began when he was a high school freshman.

“GIVE Youth is a nonprofit organization where we tutor students who don’t have access to tutors or better resources outside of school, for free,” he said. The tutors volunteer every weekend at different libraries across Northern Virginia, Wadehra said. 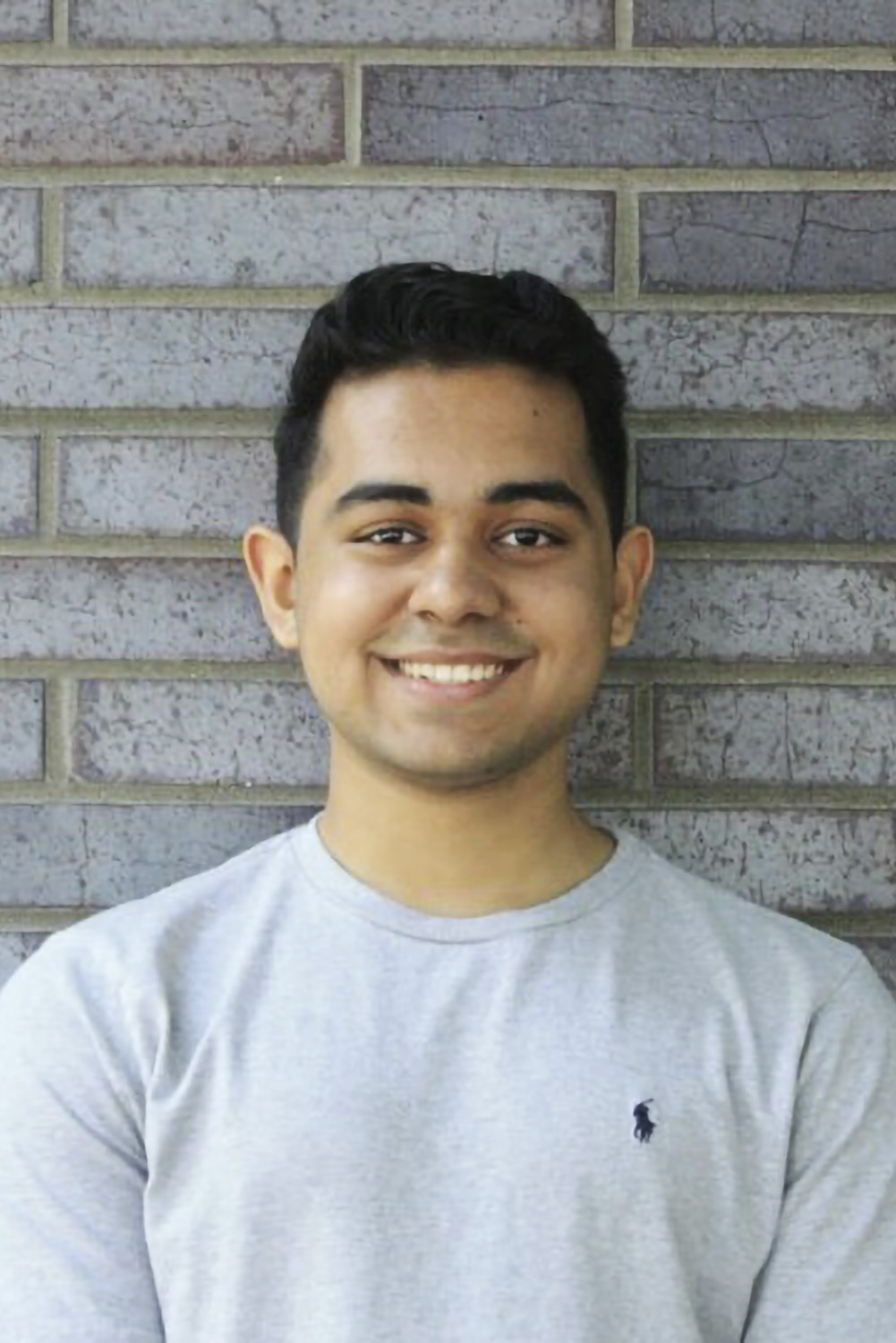 Arnav Wadehra, of Vienna, is a Jefferson Scholar. (Contributed photo)

“When COVID hit, we weren’t able to do in-person tutoring anymore, so I sort of led the initiative to make this online platform that we could use specifically tailored for our services,” he said.

In his spare time, Wadehra also managed to score an electrical engineering research internship in the Department of Physics at Georgetown University. He found a professor whose work he found interesting through a program in Northern Virginia that matches high school students with professors at area colleges and universities.

“What we did in the Georgetown internship was, I designed this spirometer, which is something to measure your lung capacity,” he said. “Usually in doctor’s offices, spirometers are really heavy and hard to move around. It’s a large machine. I designed a portable spirometer that could be used during COVID telemedicine visits.”

Wadehra, like nearly every first-year student, said he is looking forward to exploring a wider variety of courses now that high school is in his rearview mirror.

“I feel like in college, UVA offers a lot of really cool opportunities inside and outside the classroom to just explore more of what you’re interested in.”

Greg Roberts is the dean of admission at UVA, and he and his team enrolled this year’s class.

“Christopher, Lauren and Arnav represent the types of students, and human beings, we hope to attract to UVA each year,” he said. “They are kind and compassionate souls, who happen to also be incredibly creative, driven, smart and self-motivated.”

Roberts said he and his team noticed these same qualities and personal characteristics in many of UVA’s newly enrolled students this year.

“When we had the opportunity to meet these remarkable students through their applications to UVA, we were inspired and impressed,” he said. “When you meet young adults like these who possess a selfless devotion to making lives better, even during a pandemic when they themselves faced significant challenges and obstacles, you can’t help but feel optimistic about the future.”

Roberts said the Office of Undergraduate Admission is “honored to welcome our new students to Grounds this fall.”

“I can’t recall ever being quite as excited about a class,” he said. “I hope they have a wonderful, joyful, uninterrupted college experience. I look forward to seeing what they will do and accomplish in the years ahead, and I am confident that they will change the world.”

Beyond the Standard Numbers

From time to time, UVA surveys its incoming first-year students to get beyond the standard enrollment figures, such as the fact that there are 3,919 students in the newest entering class and that 2,421 of them are from Virginia.

UVA’s vice provost for enrollment is Stephen Farmer, who oversees not only the Office of Undergraduate Admission, but Student Financial Services and the Office of the University Registrar.

He says the survey helps to tell the larger story of new students.

Take the fact that 91% of surveyed students served their communities. “It’s hard to get 91% of any group to agree about anything,” he said. “I think what the statistic suggests is that our students have a heart for others.

“Almost every student who’s enrolling here this year has taken the time to serve others, he said.” And I think that speaks well of them. And I think it’s a hopeful sign for our community.”

Farmer also had uplifting words about this year’s crop of transfer students, who number 712.

“The transfer students are such a rich group,” he said. “You know, they come from so many different walks of life. They truly, really each one of them, has taken a unique path to get to us.”

Twenty-two of those students arrived at UVA through a program at the campus of UVA’s College at Wise. “That’s an important statistic. That’s through the Year at Wise program that we began two years ago,” Farmer said.

“If a Virginian works really hard as a first-year candidate, makes it as far to the waiting list, and we just can’t find a place for him or for her – in the end, we promised them eventual admission to UVA if they spend a year at UVA-Wise and do well. So those 22 students represent students who did everything right when they were in high school, ran out of luck with us – much to our regret – but then hung in there with us, had a good year at Wise and now they’ll come here.”

Farmer also said there are many other “second-chance students in the transfer group.”

“You have more than 300 of our enrolling transfer students are students who applied previously to UVA. And, you know, they did well in school, but it just didn’t quite work out for them the first time around,” he said. “But they had their heart set on UVA. They gave us another chance and they got better news and now they’re here.

“We really appreciate people’s commitment to the University and we appreciate these students giving us another chance to give them better news,” Farmer said. “And we just hope they’re going to have the experience that they dreamed about when they’re here.”

All data for our “by the numbers” statistics is from the UVA Office of Undergraduate Admission. 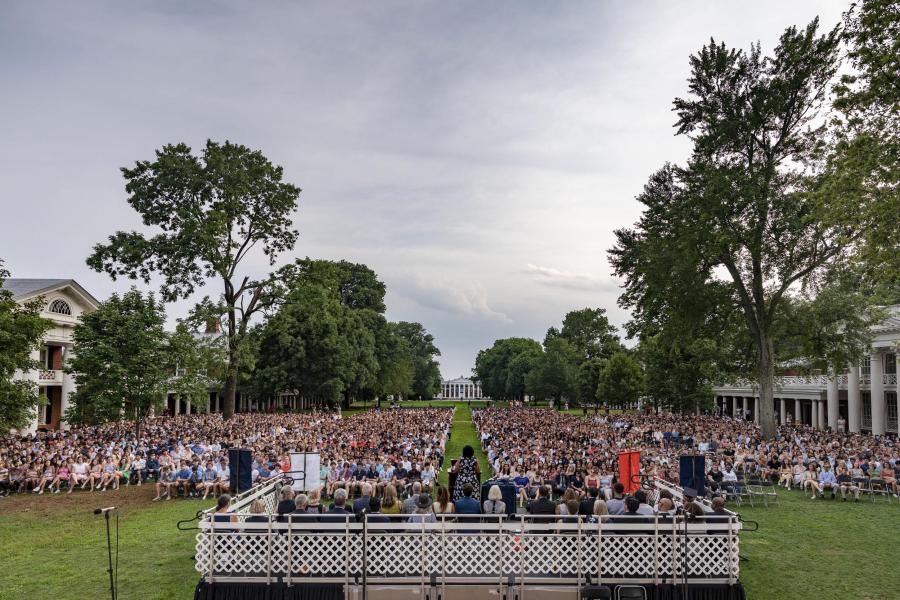 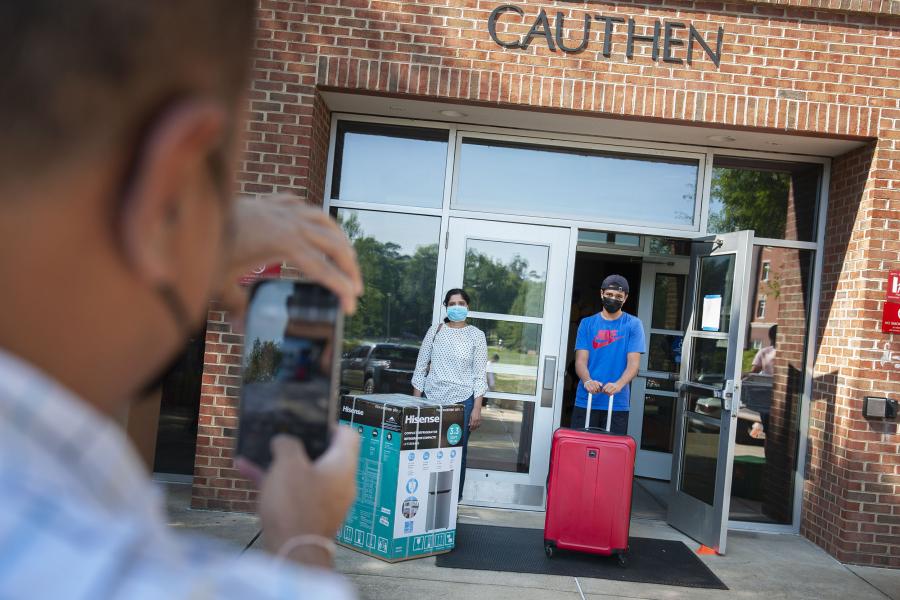 Welcome to Grounds! The UVA Class of 2025 Moves In to Dorms 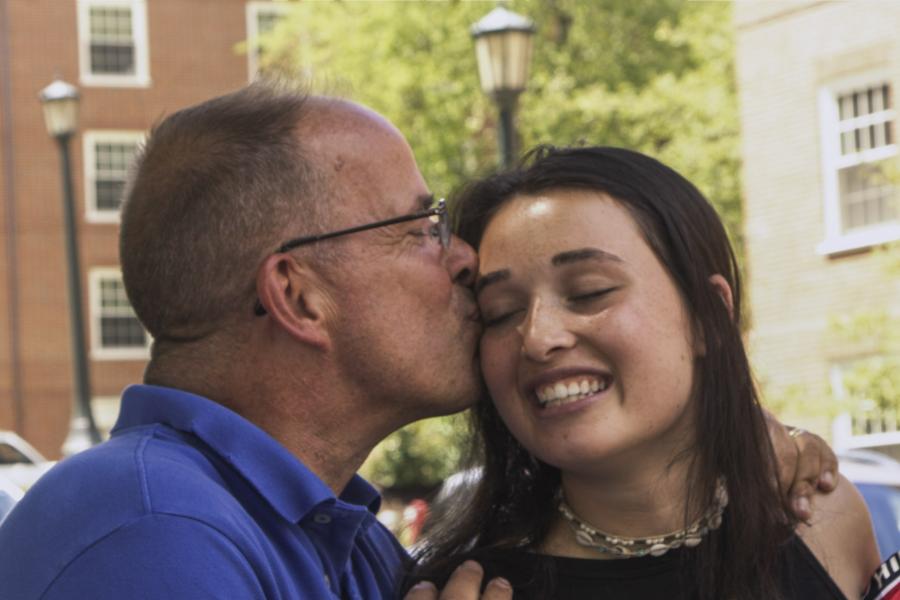