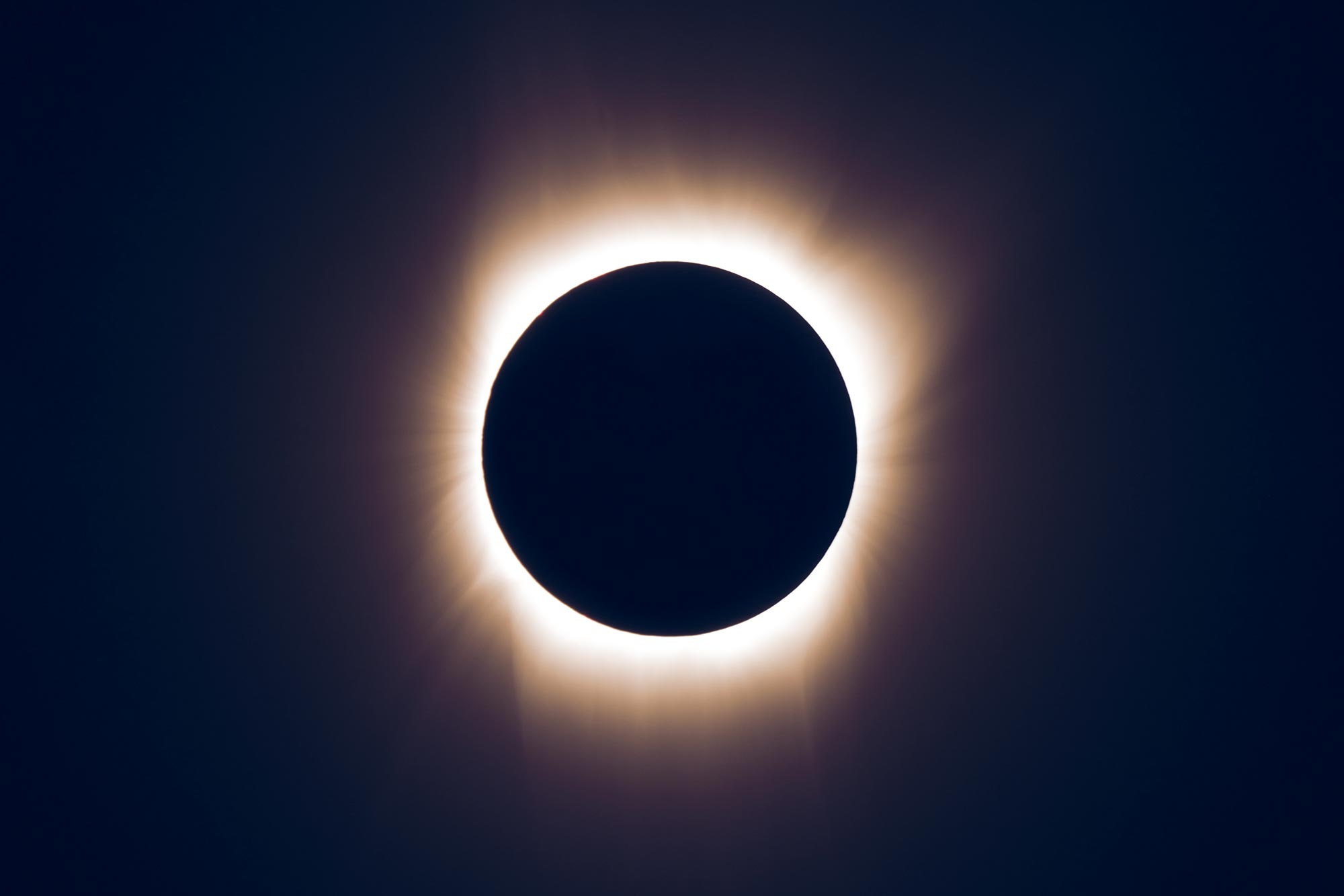 University of Virginia astronomer Ed Murphy was preparing to witness his first total eclipse of the sun, and he had a timeline. He had read every book on the subject, every article he could find, and he had made a list, timed to the second, of what he would see, as it happened.

He booked a trip on a cruise ship in the Mediterranean Sea, specifically to see the astronomical event in 2006 at a point exactly on the path of totality, the line across the Earth’s surface where the moon would block out the sun at 100 percent.

And then it began. 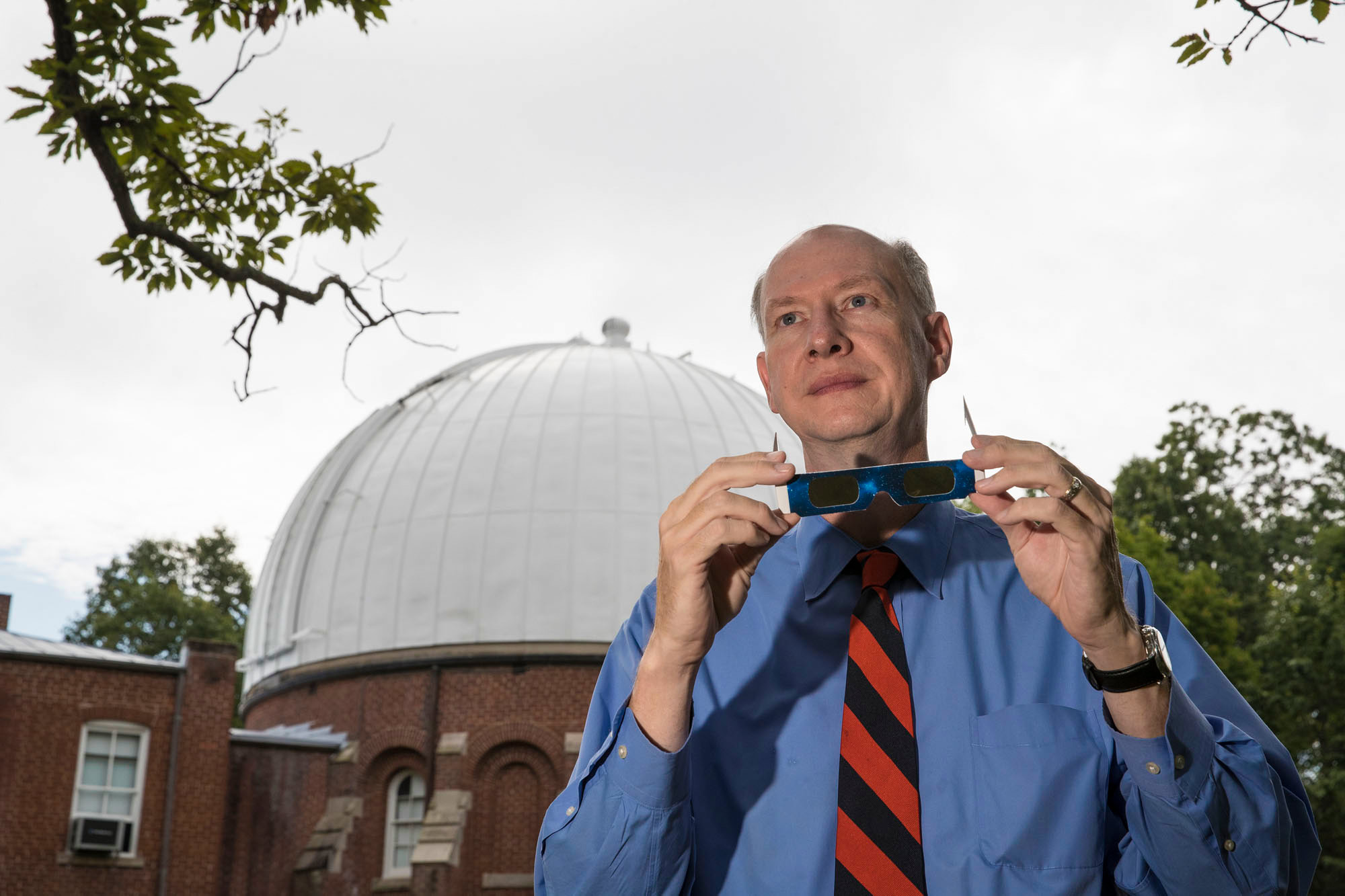 “An eerie column of darkness, the moon’s shadow, raced across the sea toward the ship at more than 1,500 miles per hour,” Murphy said. “And then we were in the moon’s shadow. As the disk of the moon blocked out the sun, the air became cool. We watched through our eclipse glasses as the moon gradually ate away at the sun.”

When the eclipse reached totality, the moon’s disk completely covered the sun and all that showed of the sun was its flaming corona, and plumes of hydrogen wavering out into space.

“Photos can’t begin to capture the beauty of this,” Murphy said.

As the day briefly became as dark as a moonlit night, the bright planets Venus and Mercury appeared.

“Then, the moon began to move away from the sun and the diamond ring of the sun appeared – startlingly gorgeous,” Murphy said. That is when a flash of light appears and lingers for several seconds just as the sun begins to reemerge. The corona, ringing the moon, now is fleetingly fitted with a shiny “diamond.”

As the moon left the face of the sun, the day became bright again and the moon’s shadow raced away, as fast as it had arrived.

“My list!” he said. “I was so awestruck by what had just happened, I completely forgot my critical list.”

Murphy has since witnessed one other total solar eclipse, that one in 2009 on a Cavalier Travels expedition in China. He didn’t bother to carry a list.

“You have to chase these,” he said. “You can’t wait for them to come to you.” 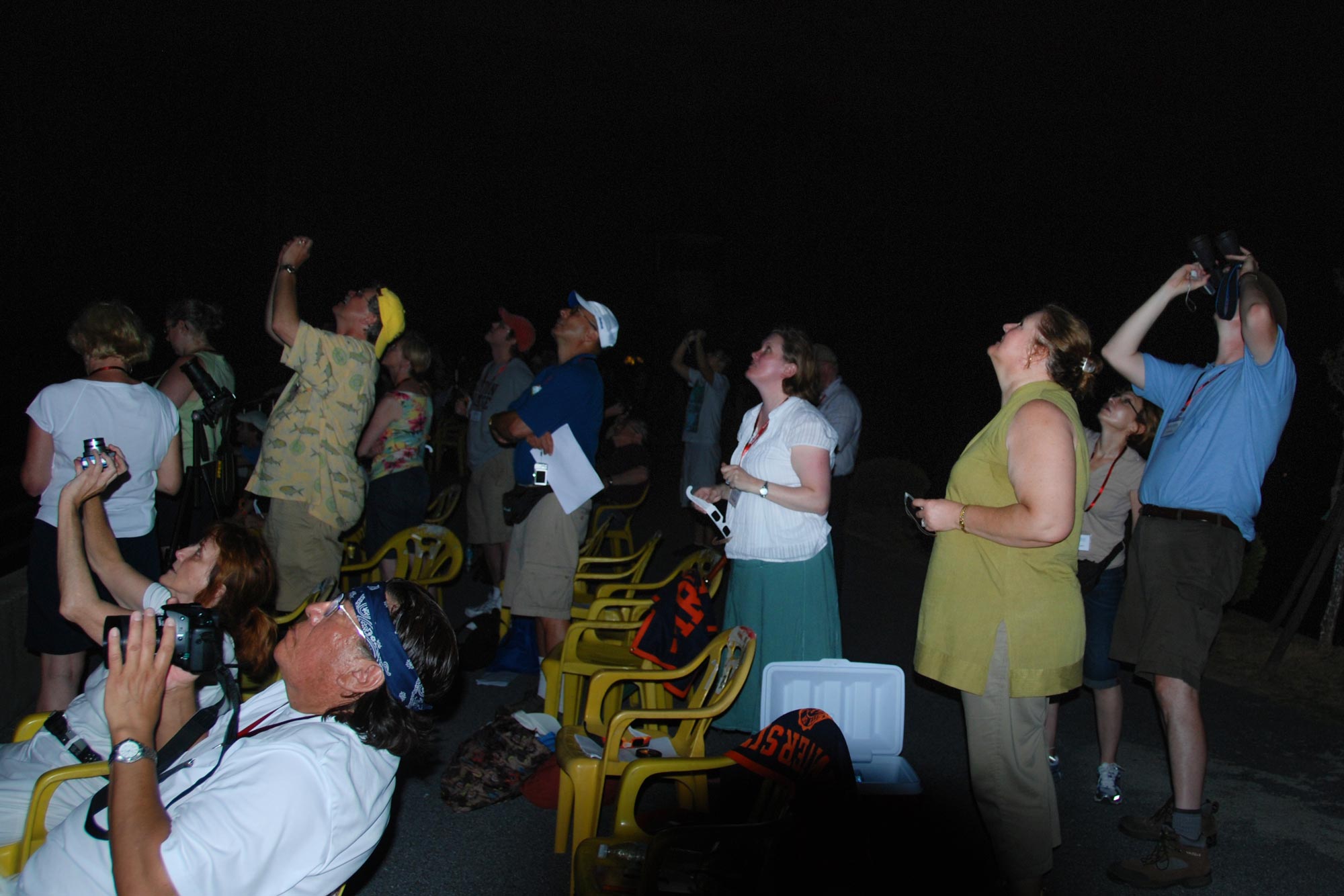 Murphy says that a total solar eclipse is a “bucket list” event that each person should see at least once, if possible. The last one viewable from what is now Charlottesville was before Columbus discovered the New World. The next won’t happen in Charlottesville until September 2099.

“I don’t know about you, but I think I’ll miss that one,” Murphy said.

He does plan to “catch” the next-closest one when it occurs on Aug. 21 this year. The “path of totality” will cut a 70-mile-wide southeasterly swath across 14 states, beginning in Oregon in the morning and traveling across South Carolina by late afternoon. Depending on the location, the day-turned-to-night effect will last along that traveling line from a few seconds to nearly three minutes, with the longest times occurring in the eastern United States. All along the path, cities, parks, libraries, universities and clubs will host viewing festivals and parties. 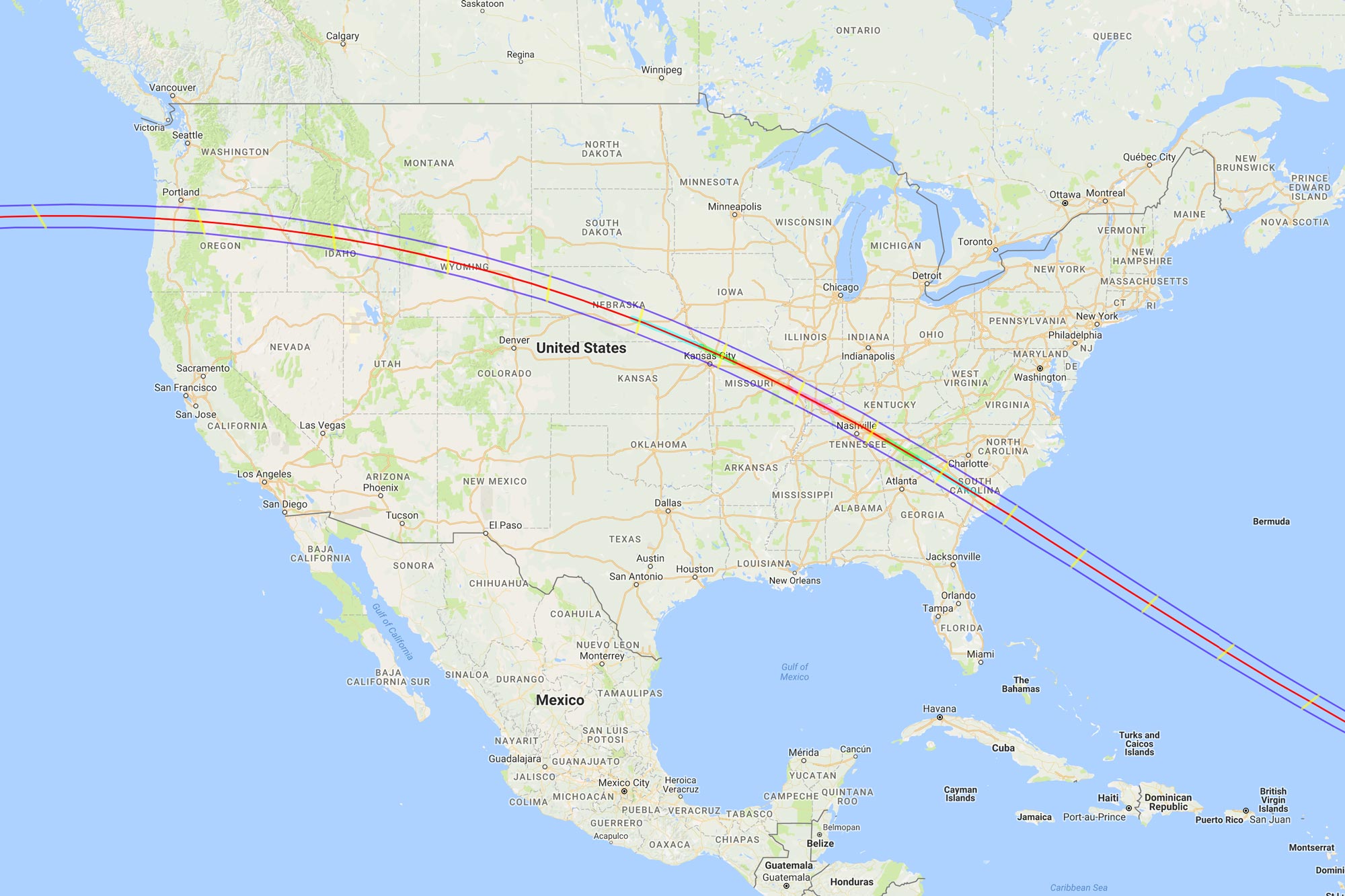 Murphy said the closest, best places to view the total eclipse – within a day’s drive of Charlottesville – will be in parts of South Carolina, Kentucky and Tennessee. (Nashville is the largest city to get a prime view; Hopkinsville, Ky. will get the longest, at 2 minutes, 42 seconds). Murphy will enjoy the view from Columbia, S.C., while serving as a scientific consultant during a public event at a Boy Scout camp.

He expects Interstate 95 to be a “parking lot” as perhaps a million people head for viewing sites in South Carolina. And many hotels and campsites along the path of totality may already be booked up.

Murphy said that people in Charlottesville will witness a partial solar eclipse; the moon blocking 85 percent of the sun’s surface, forming a solar crescent, which will begin at 1:15 p.m., max out at 2:41 p.m., and conclude at 4:01 p.m. 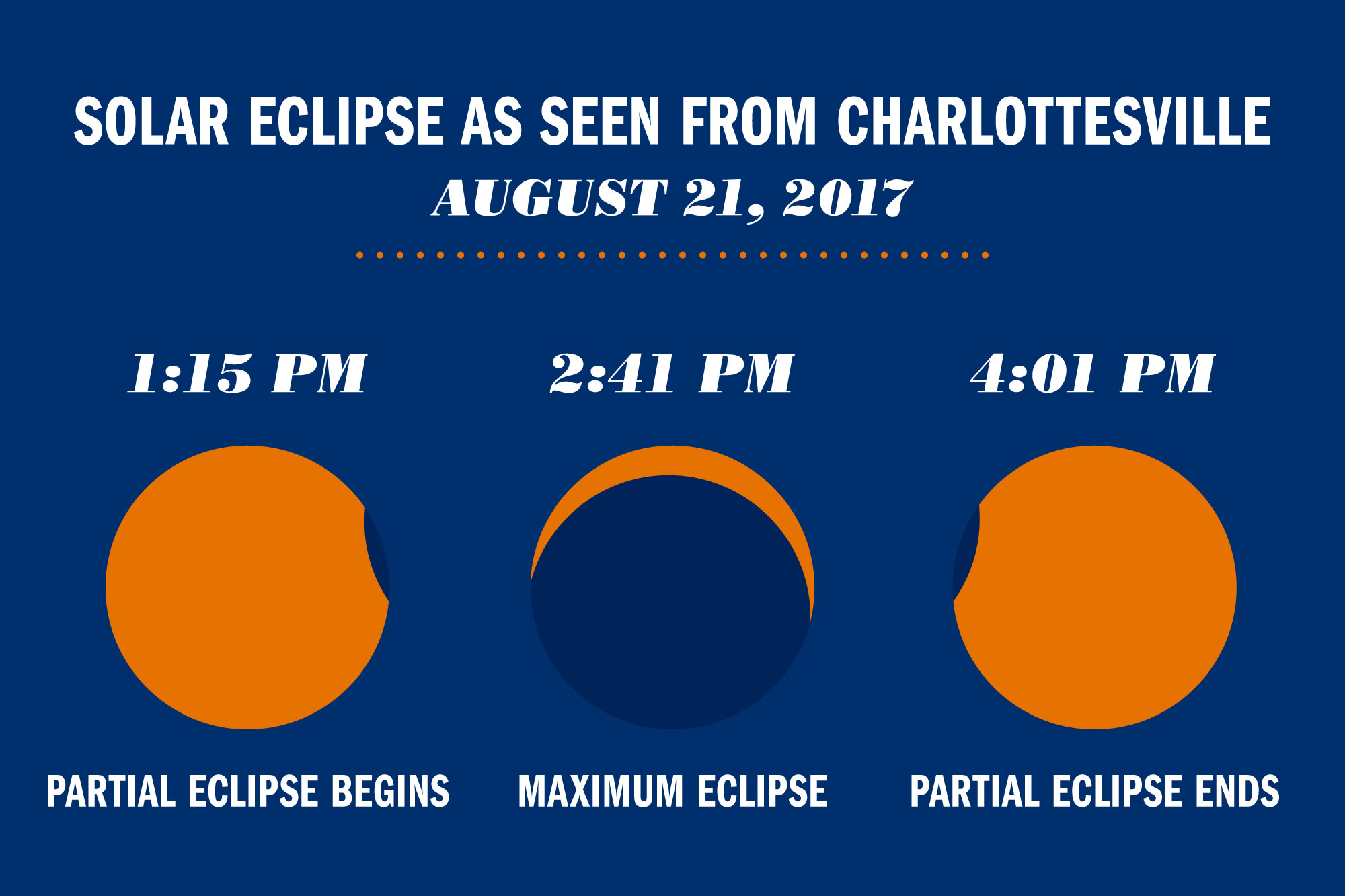 “The partial eclipse still will be exciting to see, but because the eyes readily adjust to changing light levels, the day will appear every bit as bright as normal,” he said.

Prior to the big day, Murphy is hosting and leading several events for the UVA astronomy department, including lectures and workshops at UVA’s McCormick Observatory for the Friends of the McCormick Observatory. He also will hold workshops this month and next for schoolteachers in Charlottesville, Abingdon and Virginia Beach, and will distribute free solar eclipse glasses to teachers for their students’ use.

“A solar eclipse is a great opportunity to teach kids about the solar system, and it also fits in with the Standards of Learning content exams,” he said.

Murphy notes that anyone who wishes to view the eclipse, partial or full, must obtain and use special certified solar eclipse viewing glasses that block ultraviolet and infrared light. Observing an eclipse with the bare eyes or even regular sunglasses will cause severe and permanent eye damage.

A Year We Will Never Forget: 2019-20 in Review END_OF_DOCUMENT_TOKEN_TO_BE_REPLACED

‘What Will You Carry With You?’ Remarks From UVA President Jim Ryan END_OF_DOCUMENT_TOKEN_TO_BE_REPLACED