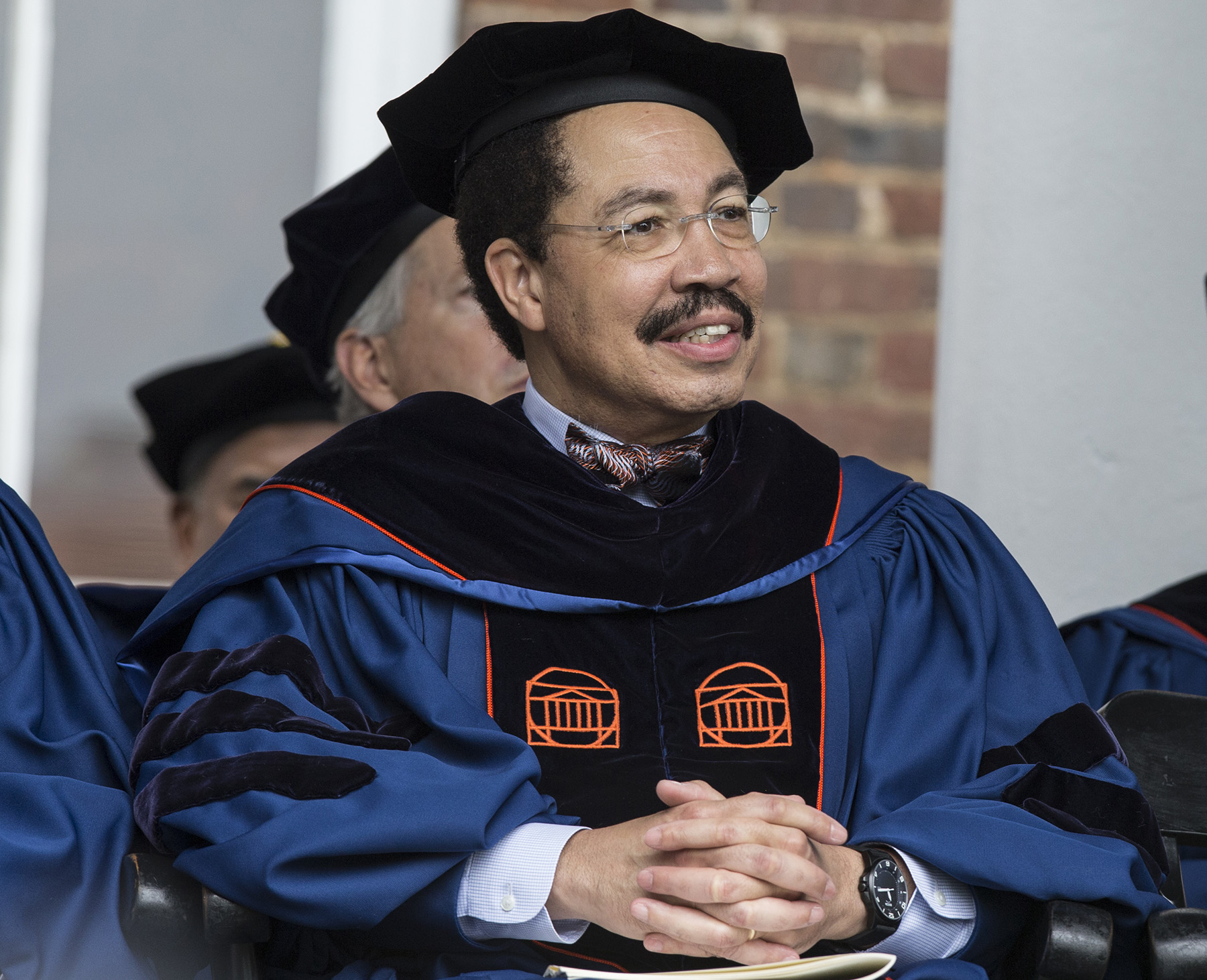 As a high-schooler in the 1970s, George Keith Martin had his eye on just two colleges: Williams and the University of Virginia. A trip to Grounds with a classmate helped seal the deal for U.Va., and it’s a decision Martin has never regretted.

Decades later, Martin has many fond U.Va. memories, from his favorite professors and classmates to his overextended list of activities to the simple pleasure of reading on the Lawn.

He also has ongoing connections. Martin revels in his time on the Jefferson Scholars Foundation selection committee. It’s a chance to meet and interact with some of U.Va.’s brightest students.

The former speech communications major, who later earned a law degree from Howard University, is managing partner of the Richmond law office of McGuireWoods. In that role, Martin admits to getting extra satisfaction from hiring graduates of the University, newly minted professionals who typically arrive to work with a commitment to quality and a serious approach that he credits in part to the influence of the Honor Code.

Today, Martin’s ties to U.Va. grow stronger. In July 2011, Virginia Gov. Robert F. McDonnell appointed Martin to the Board of Visitors. And on Sept. 13, Martin’s board colleagues unanimously elected him as vice rector, making him the first African-American to hold that position here.

UVA Today caught up with Martin to talk about old times and new. An edited transcript:

Q. You described your father – who was a Korean War veteran, a coach and an entrepreneur – as your role model. What was it about him that made you want to emulate him?

A. Dad was an avid reader. He always had a stack of books, magazines, newspapers on his side of the bed. He was just very, very precise, and just a great role model, a great coach. Dad stressed the importance of education. My mother was a lawyer, but Dad was really the one who planted the seed about going to law school.

Q. What about role models and mentors outside of your family?

A. Leroy Hassell, the late chief justice (of the Virginia Supreme Court), was actually my very best friend. We met here at U.Va. and I remember the day that I met him. I remember the first conversation. He helped me in a lot of ways. At Christmastime and Thanksgiving, he would call me and say, “Look, we’re going to go shopping, go buy groceries for disadvantaged families and go deliver them.” He was always thinking of other people.

Q. What tipped the decision to come to U.Va. instead of Williams College?

A. I got invited to an event in Richmond. It was a fairly small group of people, and the person who spoke was president of the Student Council, a very, very impressive young man. Not too long after that, a buddy of mine said, “Let’s go and visit.” We came up for a visit and after that I was sold.

Q. U.Va. didn’t admit black students until the 1950s and had relatively few African-American students when you were a student. Did that influence your thinking at all?

A. Not really. The friend that I came up with was Caucasian. The people that we saw here were Caucasian. (There were only about 10 black students at Martin’s high school in Richmond.)

Q. Do you recall the day you arrived on Grounds?

A. My dad drove me up. Dad had a red, Ford, paneled station wagon. We came up, went to the Navy game, and it was funny because in the first half Virginia was leading 14-0. The sun was out. It was just gorgeous. It started raining at halftime and I think we lost the game 21-14. But it was still a good day.

I met that first day a guy by the name of Clarence Cain. (The main character of the movie “Philadelphia” was based on Cain, an attorney who won a lawsuit against his employer, which fired him after discovering Cain had AIDS.) He and another guy by the name of Oliver Singleton (Singleton ironically ran on a slate with Larry Sabato for Student Council) were basically chauffeuring students to a party off campus. So I met Cain that day, and he later became a mentor and one of my very best friends.

Q. What did you bring in the red paneled station wagon?

A. Obviously clothes, but I remember Dad bought me a couple of plaid blankets. One was yellow, and one was red. I still have those blankets, and in fact, my middle daughter has one of them on her bed.

Q. Do you recall professors or others who had a profound impact on your thinking?

A. One was Dante Germino in the government department, and then Joseph Washington.

Q. Did you have any struggles here in any way?

A. Not really. By fourth year I was definitely overextended in terms of activities. I was a senior resident. I was on the executive board for the Black Student Alliance. I was the student representative to the speech communication faculty. On the board of Madison House, had a little brother at Madison House. And we also helped coach a team of kids. Tom Klein and I started a human relations group called Intercom. We basically convinced Ralph Main, who was head of housing at the time, to let us bring in 100 first-year students early my fourth year. Half of them were black, half were white. The idea was basically to spend four days together talking about race relations, and thinking that these folks would start their year off with that type of experience.

Q. Did your outlook on life change in some way because of your experience at U.Va.?

A. Absolutely. My experience here was very special. I met a lot of interesting people, faculty members, as well as students. But I think that the most significant thing that happened to me here was that one student introduced me to Jesus Christ. And I got involved with a Bible study that was just unbelievable. That was life-changing.

Q. When you look at U.Va. today, what do you think of this place?

A. The values that were important then are still important now. And that’s commitment to excellence in scholarship, excellence in leadership and dedication to community service is still very, very important. It’s important to be a leader, and not just a leader, but a statesman. That was one of the things that I learned here, just the importance of being a statesman.

Q. Are you worried about U.Va. in the context of the pressures of higher education financing and criticisms of loan amounts and financial pressures?

Q. Is it fun being an attorney?

A. I enjoy it. The irony is this: I actually wanted to be an architect. I’m in the real estate group, and I do a lot of construction and public-private partnerships. So I joke that I sort of get it vicariously. I love what I do.

Q. As you begin your term as rector of the Board of Visitors, what will be a primary goal?

A. We will receive a report on the strategic plan at our board retreat in August. Later in the fall the board will adopt the plan. I am looking forward to working with President Sullivan as she and her administration implement the new strategic plan. This plan is critical to our future, so I am looking forward to the presentation next month, and thereafter getting started on the implementation phase. The board understands the importance of working in partnership with President Sullivan to make this effort a success.

Q. Have you learned any big things during your time on the board so far that have really surprised you?

A. The University of Virginia is far more complex than I imagined. And it is unbelievable all the wonderful things that are going on at this university every day. It truly is a remarkable place.

Q. There’s a lot of discussion on the board about issues such as governance and committee makeup. Do you think things are headed in a good direction?

A. I feel good about that. I think that it is time for us to look at how we’re structured, No. 1. We have a lot of committees, and I don’t know if that is the best approach. We have a lot of people on the board who just love this University and really want to give back. We want to make sure that they have the opportunity for meaningful engagement.

A. I believe that we have a great president, and that we want to work with her as partners to not only maintain the greatness that we’ve already achieved, but to excel in other areas. I’m still relatively new, and I will admit that I’ve had more contact with her recently. But it’s been very pleasant and I think she’s a good listener and I think that’s so important.

I think also because of her background in sociology, she probably understands people and the importance of listening to different viewpoints and trying to build consensus. That’s a very important quality for a college president. It’s clear that she’s done an excellent job of engaging the faculty, students, the alums. I think people in large part have not only confidence in her, but I think they trust her, and that’s a very important component.

Q. What can you count on getting from a U.Va. grad who is just starting work at your firm?

A. When you interview people and you know that they have attended the University and have lived under this honor system, that just gives you a lot of comfort in terms of trust – trust in terms of integrity, that you know that they are really going to give you their all. If they take on something, they’re going to take it seriously. That’s an important byproduct of the Honor Code.

Q. Did you live on the Lawn?

A. My last year I was the only black senior resident, which of course meant I had to bypass the Lawn. I was told it was important to have a black person serving as a senior resident. Some days I regret not living on the Lawn. I had good grades and activities (but) I never applied.

Q. Outside of work, what interests you?

A. I have three daughters. We spend a lot of our free time going to their activities. I teach 5-year-olds at church. I’ve been doing that for 20-plus years. I do puppets for the kids. My dad was a scratch golfer. I love to play, but just don’t have the time to play so I can develop his skills.

Q. What irritates or aggravates you?

Q. Like your father, do you read a lot?

A. I love history. So history, biographies, autobiographies. My wife is a writer and she loves fiction. I read some fiction, but not a lot. I love reading newspapers and keeping up with current events. I read a lot of Christian books as well, and try to read my Bible every day.