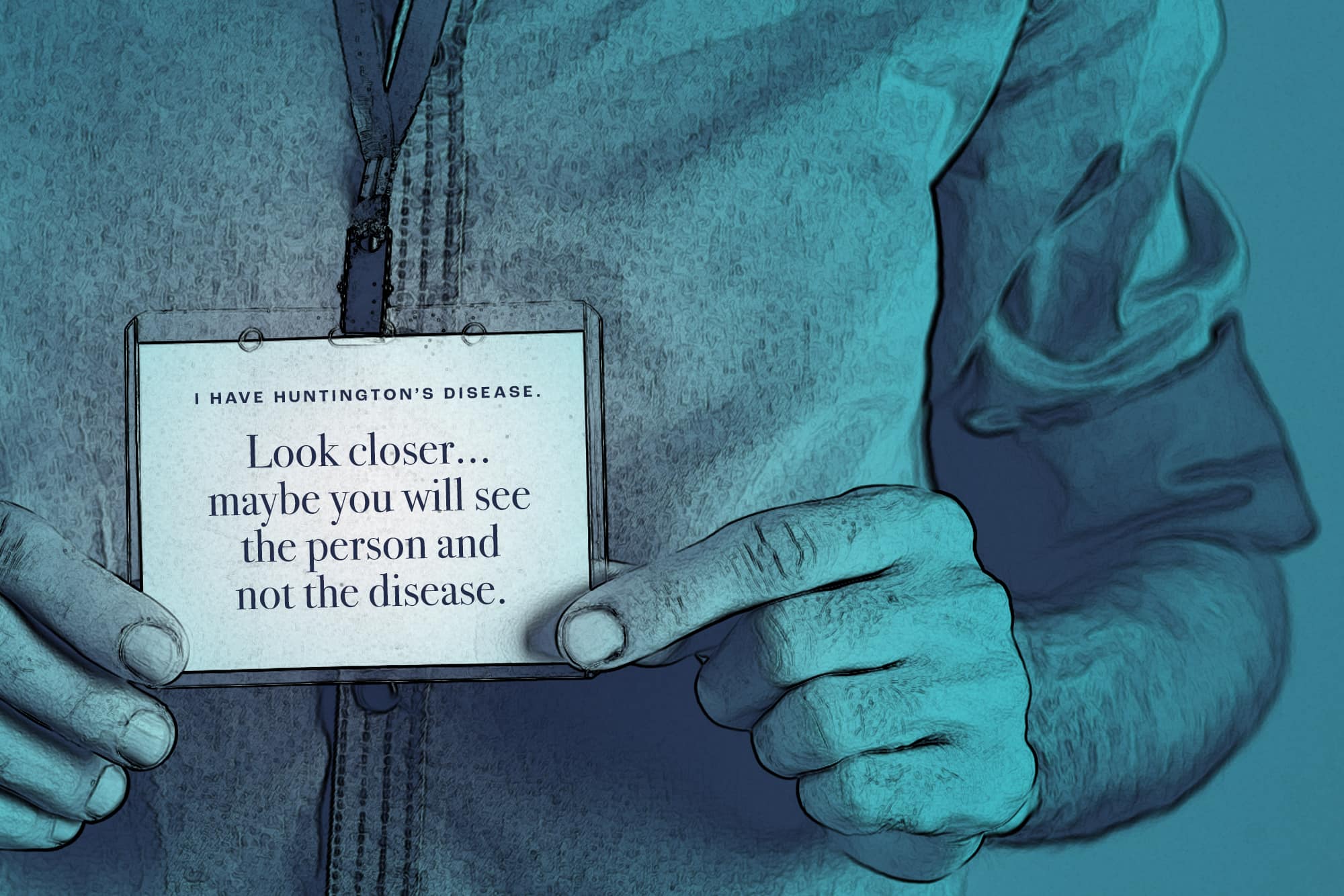 His body twitched and jerked. His shoulders rolled forward and back. His head rocked side to side like a metronome, but without rhythm.

Smith, a fourth-year student at the University of Virginia, struggled to open a plastic produce bag in front of an apple display. And he was acutely aware of the uncomfortable looks from the people around him.

After two minutes, he approached curious bystanders, offering them a handwritten index card which read: “If you see a person behaving strangely, it could be because they have Huntington’s disease. They may appear distracted or have trouble walking, but if you look closer, maybe you will see the person and not the disease.”

Smith doesn’t actually have the disease. But as a cognitive science major concentrating in neuroscience, Smith was replicating the unexpected and uncontrolled jerking and twisting body movements characteristic of Huntington’s disease, called “chorea,” as part of a project to engender understanding and compassion for those who have that disease or any of the other 600 neurological disorders. He and his fellow students created “empathy kits” to help others better understand the incurable neurological diseases and disorders that affect an estimated 50 million Americans. 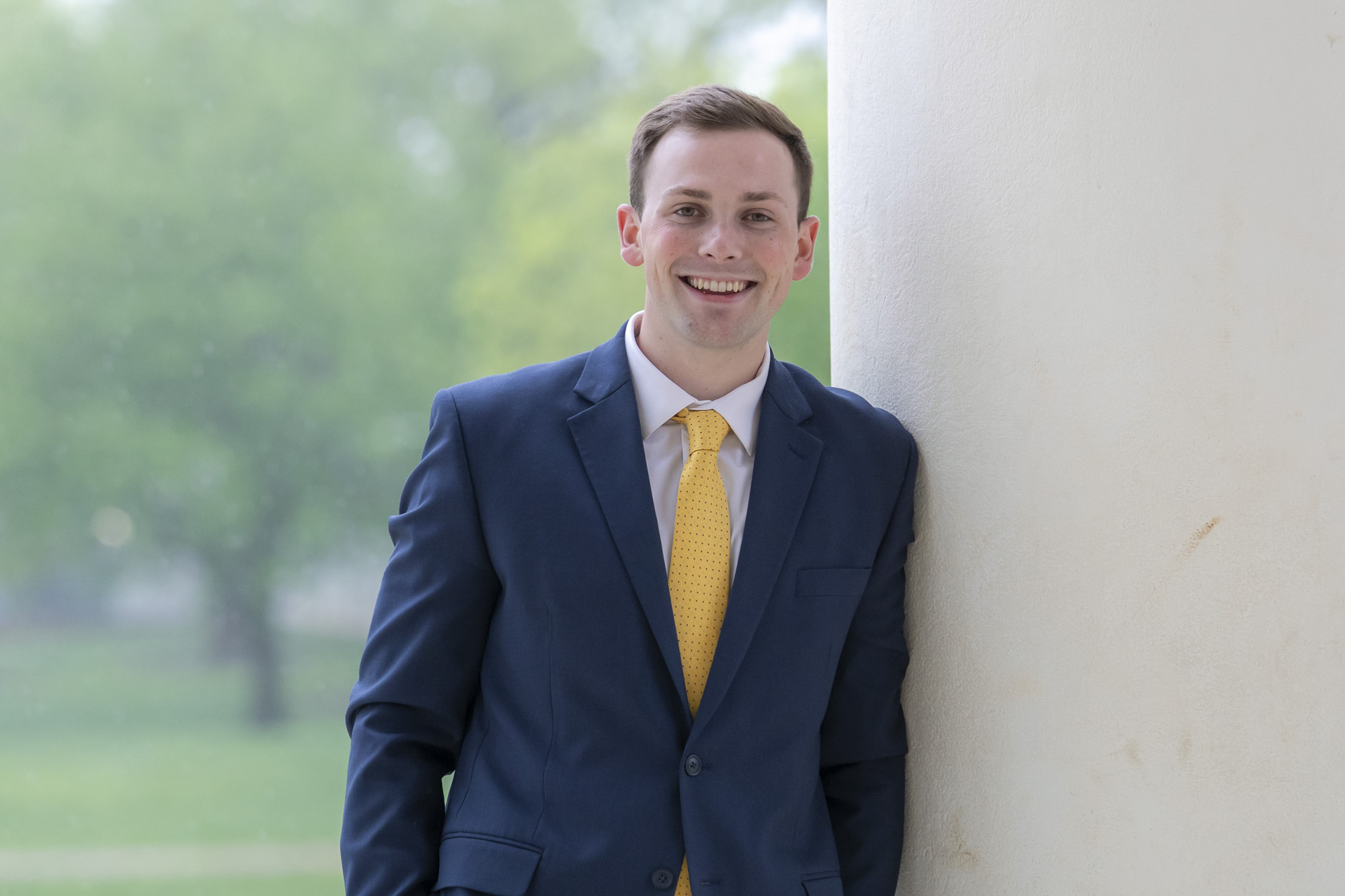 In the spring of 2021, The Neurodegenerative Experience, a course that aims to understand what it is like to live with a neurological disorder, was introduced to undergraduates at UVA. Each of the course’s three units focused on one of the most well-known diseases: Alzheimer’s, Huntington’s, and Parkinson’s. The course focused on analyzing each from the level of the cell and brain, and from the perspectives of the patient, family, caregiver and community.

As a way of uniting micro- and macroscopic perspectives, students were split into three subgroups, each tasked with creating a five-minute “empathy kit” video portraying what it is like to live with one of the disorders. The videos take viewers through a day of activities that mimic life as a patient.

In preparation, students not only searched the literature on cellular processes, but also heard from biology and psychology experts across Grounds; patient coordinators and caregivers; representatives from nonprofits such as the Huntington’s Disease Society of America; and even two alumni of UVA's neuroscience doctoral program who now work for the Michael J. Fox Foundation for Parkinson’s Research. (Todd Sherer, the executive vice president for research strategy, is a 1999 alum. Brian Fiske, a co-chief scientific officer, is a 2000 alum.)

Most importantly, students gathered information and recommendations through interviews with individuals actually living with the disease.

In creating the course, Department of Psychology professor Erin Clabough sought to provide a unique outlook into an otherwise unknown aspect of neurological disorders.

“Just like anything that someone is struggling with, if it is invisible, something that is affecting neurons in the brain, it is really difficult to understand all the different aspects of life that it touches on,” Clabough said. 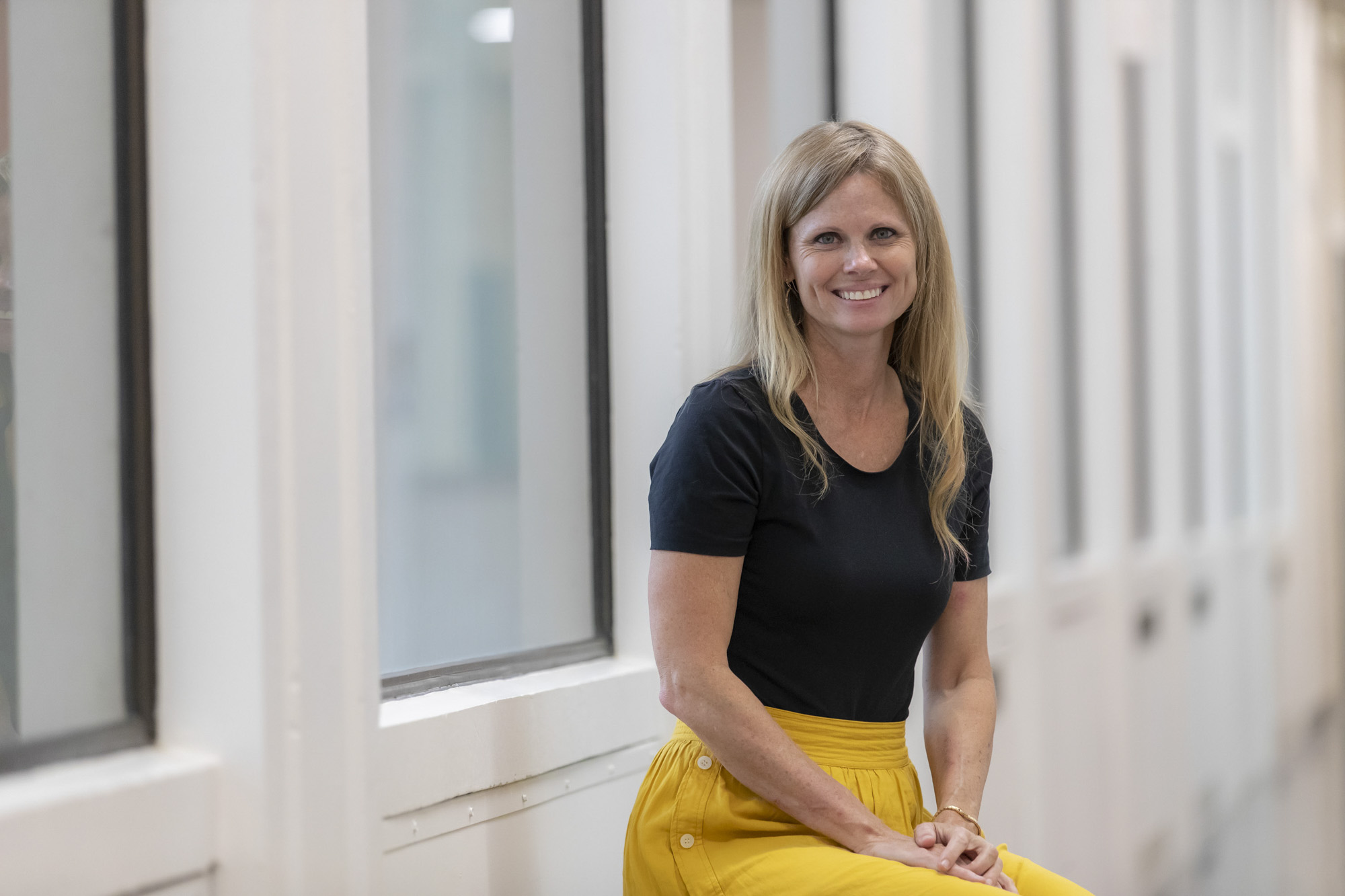 Department of Psychology professor Erin Clabough created the “Neurodegenerative Experience” class to provide a unique outlook on neurological disorders. She invited to the class Todd Sherer and Brian Fiske of the Michael J. Fox Foundation for Parkinson’s Research, both of whom are UVA neuroscience alums. (Photo by Erin Edgerton)

By learning through both scientific and social lenses, The Neurodegenerative Experience attracted psychology students interested in both the patient experience and molecular biology sides of disease. The course offered a multidisciplinary look into important disorders that they may encounter later in life as clinical professionals.

As a way of portraying life as a Huntington’s patient, Smith’s group spoke with patients to understand how their biggest struggles could be accurately represented by the average person. By pulling from multiple lenses, the group was able to put together a holistic view of the disease.

“It is one thing to hear about [Huntington’s disease] through textbooks, but it is another to actually talk to someone who goes through it,” he said.

One conversation in particular stuck with Smith. A patient described his experience walking outside and being approached by two police officers – keying on the man’s flailing arms and stumbling gate – who suspected him of being drunk in public. To prevent arrest, the man was forced to explain his disorder to the officers. He even wore a card around his neck with a doctor's signature, explaining what Huntington’s disease was, and that he had it.

In addition to chorea, Smith focused on dystonia, another Huntington’s symptom characterized by rigidity and muscle contracture. Since the symptom often comes in the form of repetitive or twisting movements, the empathy kit asks viewers to brush their teeth entirely with their mouth open, while tilting their head side-to-side every second. The effect, Smith says, is very messy, though it imitates the inability to control everyday movements.

“Simple things that we take for granted, like brushing your teeth, can become extremely difficult for someone with Huntington’s,” Smith said.

When it came to replicating chorea in Kroger, viewers were asked to set three alarms throughout the day, and to mimic chorea-like movements for two minutes. Smith explained that the objective was for people to understand the social impact of living with a neurological disorder.

“When you watch the video, you’ll see a lot of people look at me very weird; they’re trying to understand what is really going on with this person,” Smith said. “By creating a symptom where you are moving around, where you are jerking and shaking your limbs, it gives people the idea of understanding the social stress of having this disease.”

Clabough says the empathy kits are particularly important when it comes to mitigating the daily frustrations that patients, family members and caregivers face.

Since the end of the course, the empathy kit videos have been distributed to groups throughout the UVA and Charlottesville community. To spread their reach on an even larger scale, students submitted their empathy kits to the annual Brain Awareness Video Contest hosted by the Society of Neuroscience. 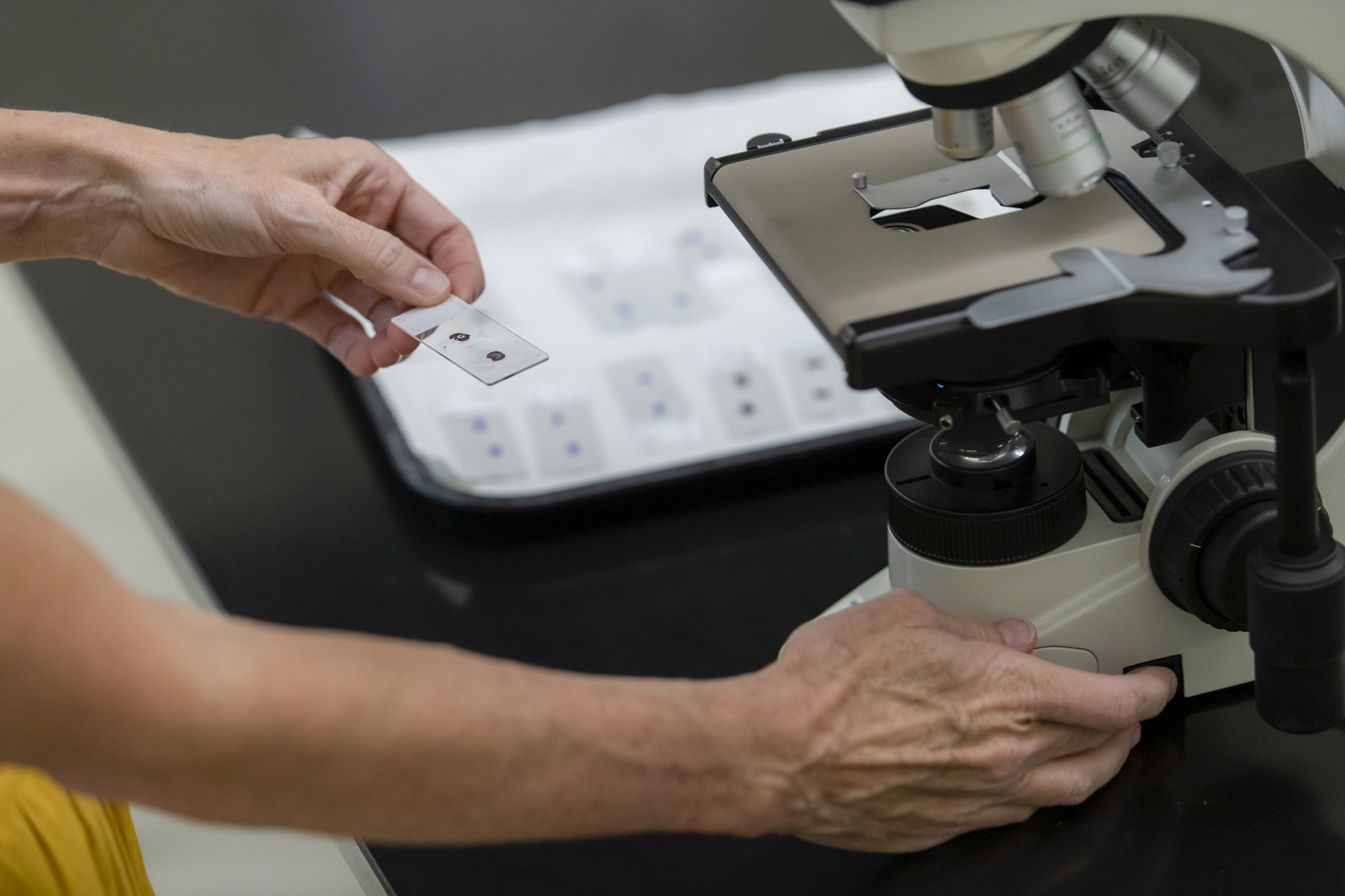 Professor Clabough is working to connect UVA neuroscientists with student organizations raising funds for diseases like Alzheimer’s since all are working to solve the same problems. (Photo by Erin Edgerton)

As the chair of the Outreach Committee for the Department of Psychology, Clabough has used the videos as entry points to foster brain awareness in local nursing and retirement homes where such disorders are more common. In May, faculty from the department will begin presenting the videos in nursing homes to start empathy-driven conversations.

Clabough also used the course to facilitate connections across Grounds, between those raising money for neurological disorders and those doing lab research. During the semester, Clabough connected Hoos for Memory, a student organization focused on Alzheimer’s fundraising efforts, with George Bloom’s lab on the mechanics of Alzheimer’s. For Clabough, making links between UVA basic neuroscientists and student groups who are working to combat the same disorders and support the same populations can be deeply rewarding for all involved.

“When you actually look, it is amazing that those people aren’t connected,” Clabough said. “Finding a way to get all these things connected would be the next thing that I would love to see at the University, in terms of support for neurodegenerative diseases.”

The patients the students interviewed expressed gratitude for the empathy kits, commending their ability to accurately portray even a glimpse of their daily struggles. Clabough hopes to turn The Neurodegenerative Experience into a January term course in the future that will focus on lesser-known neurological diseases, raising awareness and spreading empathy for a multitude of disorders.

“It was rewarding … just to learn about it and understand that people are going through things that you might not realize,” Smith said.

What Is Biotechnology? Where Is It Headed at UVA? END_OF_DOCUMENT_TOKEN_TO_BE_REPLACED