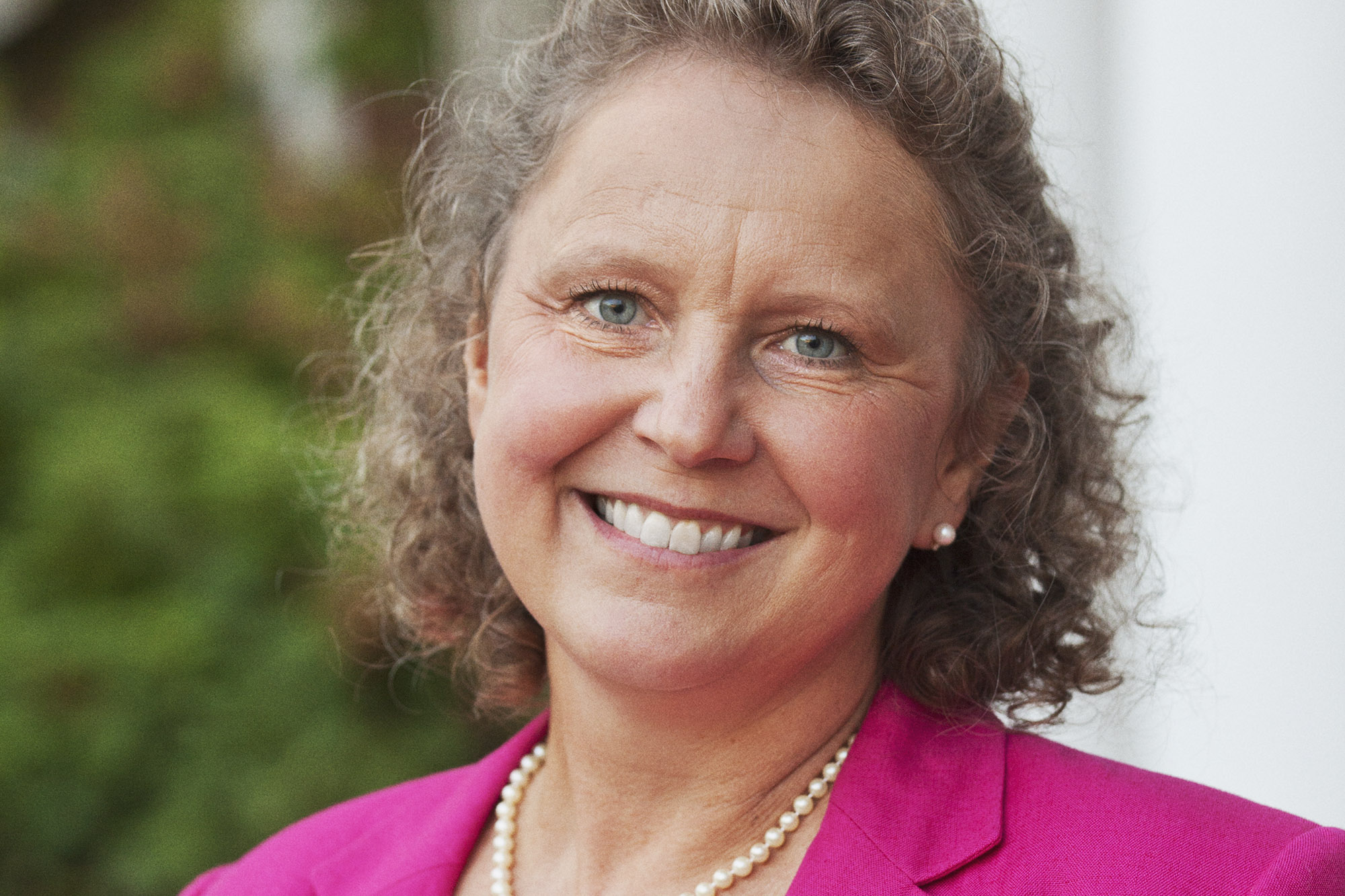 Pamela Norris said she was “honored to have worked with so many exceptional faculty, staff and students at UVA. I believe we truly made a significant impact on society’s dilemmas and changed many lives for the better.” (Photo by Peggy Harrison)

Pamela M. Norris, executive dean of the University of Virginia School of Engineering and Applied Science and Frederick Tracy Morse Professor of the UVA Department of Mechanical and Aerospace Engineering, has been named vice provost of research at George Washington University, the school announced Thursday. Her appointment begins Nov. 1.

“Pam is an exceptional leader with a strong vision for higher education’s potential to make the world a better place,” UVA Engineering Dean Jennifer West said. “Her impact on research and education will be felt at UVA and beyond for many years to come.”

In the announcement of Norris’ appointment, GW’s interim provost, Christopher Alan Bracey, said, “Dr. Norris joins us at an exciting time for research at GW, when our faculty and students are back in full force in our labs and other research spaces on campus and are committing themselves to scholarship and discovery. The continued growth and expansion of our research enterprise across all fields, including the physical sciences, arts and humanities, is a critical aspect of how GW will fulfill its promise as an innovative institution of higher education, and Dr. Norris’ years of experience as a research administrator and renowned scholar make her a perfect choice to lead the future of research at GW.”

Norris joined the UVA faculty in 1994 and earned the rank of full professor in 2004. She came to UVA after earning her Ph.D. at the Georgia Institute of Technology in 1992 and ​conducting postdoctoral research at the University of California, Berkeley, with mentor Chang-Lin Tien, a pioneer in the field of microscale heat transfer and the university’s late chancellor and professor of mechanical engineering.

“I accepted a position at the University of Virginia, the flagship university in my home state, where I knew I could make a difference,” Norris said. “The leadership and faculty at UVA Engineering are passionate about making game-changing societal advances, developing the next generation of engineering leaders and approaching problems with a diverse and collaborative mindset. I knew these values matched my ideals and aspirations.”

In her role as executive dean, she leads academic and research functions within the school and collaborates with the dean and the Leadership Council, made up of department chairs and Dean’s Office leaders, to develop the school’s strategic direction. Before serving as executive dean, she consecutively held other administrative positions that helped drive strategy for research, including the executive associate dean for research and the associate dean of research and graduate programs. In fiscal year 2021, the school’s sponsored research funding reached nearly $86 million – a 95% increase from 2016.

Norris routinely chairs and speaks at international conferences and has published more than 100 heavily cited refereed journal papers. She is recognized globally as a leader in the fields of nanoscale heat transfer and aerogel research, and she is an honorary member and fellow of the American Society of Mechanical Engineers. She has drawn more than $25 million in research grants to UVA.

Norris’ pioneering innovations started very early in her academic career. As an undergraduate mechanical engineering student at Old Dominion University, she led a capstone team that developed a new design for an oxygen processor. This type of processor converts carbon dioxide to oxygen and is critical for space missions because rocket propellent needs oxygen to work. The team’s 1986 proof of concept, developed in just four years with small grants from the Planetary Society and the NASA Advanced Space System Design Program, later became the Mars Oxygen In-Situ Resource Utilization Experiment, or MOXIE, and was successfully used to create oxygen from the Mars atmosphere, which is mostly carbon dioxide, on the recent Mars Perseverance Rover expedition. In addition to aiding propulsion, MOXIE could eventually provide breathable oxygen for astronauts when human missions go to Mars.

Fast forward to Norris’ first grant at UVA, where she studied the way energy transports through different materials on a microscale. She needed aerogels – ultra-low-density, highly porous solids – for this research but found them cost-prohibitive. “So I made them myself,” she said. Norris became fascinated with the material, which she says looks like “a piece of San Francisco fog” because it is 98% air, and founded the Aerogel Research Lab.

In another aerogel project, she received funding from the U.S. Department of Defense to create aerogels that could be used to detect airborne biological warfare agents. The aerogel material is designed with specific molecular receptors. When the receptors detect hostile agents, the material changes properties, which acts as an alarm. This project was the leading edge of what has now become a substantial area of study in the fields of mechanical engineering and materials science: smart materials.

Norris holds patents for applications of aerogels in areas ranging from biological warfare detection to thermal insulation to lab-on-a-chip.

Norris also founded the Nanoscale Heat Transfer Lab and holds patents for innovative thermal management techniques for jet-blast deflectors and landing pads. She created a new way to cool deck plates on aircraft carriers and prevent thermal buckling caused by hot engine exhaust from aircraft. Her research replaced the old, low-tech method of cooling decks – seawater – which was no longer viable, especially for smaller carriers that have a harder time with heat dispensation and because newer vehicles blast downward during vertical takeoffs, causing more intense heat.

A testament to Norris’ determination and ingenuity is illustrated by the fact that, when she wanted to test her team’s design of next-generation landing pads for vertical take-off and landing aircraft, as part of a program with Northrop Grumman Corporation and the Office of Naval Research, she arranged to test using a V-22 Osprey aircraft as the heat source.

“The irony of a nanoscale heat transfer engineer utilizing a giant Osprey to test our design was not lost on me,” Norris said.

She also made advances in the field of thermal management when she led a $7.5 million federal Multidisciplinary University Research Initiative program to start converting U.S. Navy ships from gas turbines, pressurized air and steam into all-electric systems.

“We were breaking new ground,” Norris said. “Our task was to explore new ways to cool entire ship-wide systems that were unprecedented in their size and complexity, yet composed of millions of individual elements whose features can be measured in microns. A further requirement was that these solutions, on the macro and micro scale, had to be integrated. These new approaches required ‘chip to ship’ thermal management.”

She assembled a team of experts from Arizona State University, the University of California, Berkeley, the University of Illinois and Rensselaer Polytechnic Institute. Norris understood that the Multidisciplinary University Research Initiative was designed to bring together collaborators from a variety of fields and that cross-fertilization was the only way to solve a problem of this magnitude.

The Multidisciplinary University Research Initiative project was one of many research projects where she leveraged the power of a multi-disciplinary approach to make significant engineering advancements. Her leadership in this area helped build UVA Engineering’s rich and diverse cross-disciplinary research culture that not only solves tough problems, but attracts many faculty members and students to the University.

Norris is also well known for her mentoring skills and her dedication to increasing the representation and retention of women in the STEM disciplines. She is among those responsible for making UVA Engineering the No. 1 public engineering school in the United States for the percentage of women graduates among schools with at least 75 engineering degree-earners. She dedicated five years of service as the director of UVA’s National Science Foundation ADVANCE Institutional Transformation program to promote gender equity among faculty in STEM fields.

Norris is a first-generation college graduate who started at her hometown college and then successfully navigated the challenges of being a woman in engineering at a time when women were far more underrepresented than they are now. Because of her background, she is inspired to make sure all engineers, especially women and underrepresented students and faculty, do not sell themselves short or underestimate their contributions.

“Our work is exciting, challenging, stimulating and usually requires working in teams with diverse backgrounds and expertise,” Norris said. “The world’s most challenging problems will require innovative solutions, and our best hope for addressing these challenges lies in the types of creative solutions that result when diverse teams work together.”

She has been honored with multiple awards for her work in this area, including the 2016 Society of Women Engineers’ Distinguished Engineering Educator Award “for enduring, positive influence on students’ lives as a gifted teacher, mentor, and role model, and for promoting greater diversity in STEM higher education”; the Elizabeth Zintl Leadership Award from UVA’s Maxine Platzer Lynn Women’s Center; and the Raven Award, given by the Raven Society, the oldest honorary society at UVA and the highest honor the society bestows upon an individual.

“There are few other professions in which you can make a bigger contribution to humanity than in engineering,” Norris said. “We design clean energy sources, provide safe infrastructure, design effective safety restraint systems, invent new types of diagnostic medical scanners, create faster microprocessors, synthesize biologically compatible materials for artificial limbs and organs – and the list of advances keeps growing.

“I feel honored to have worked with so many exceptional faculty, staff and students at UVA. I believe we truly made a significant impact on society’s dilemmas and changed many lives for the better.”

“We are thrilled for Pam that one of our peer institutions recognizes what we have long known: She is a true leader in every sense of the word,” West said. “We wish her all the best in her new role.”

Norris said she is excited about the opportunity to provide strategic leadership as the new vice provost of research and propel the GW research community toward their mutual vision for meeting society’s pressing needs and serving as an engine for global good.