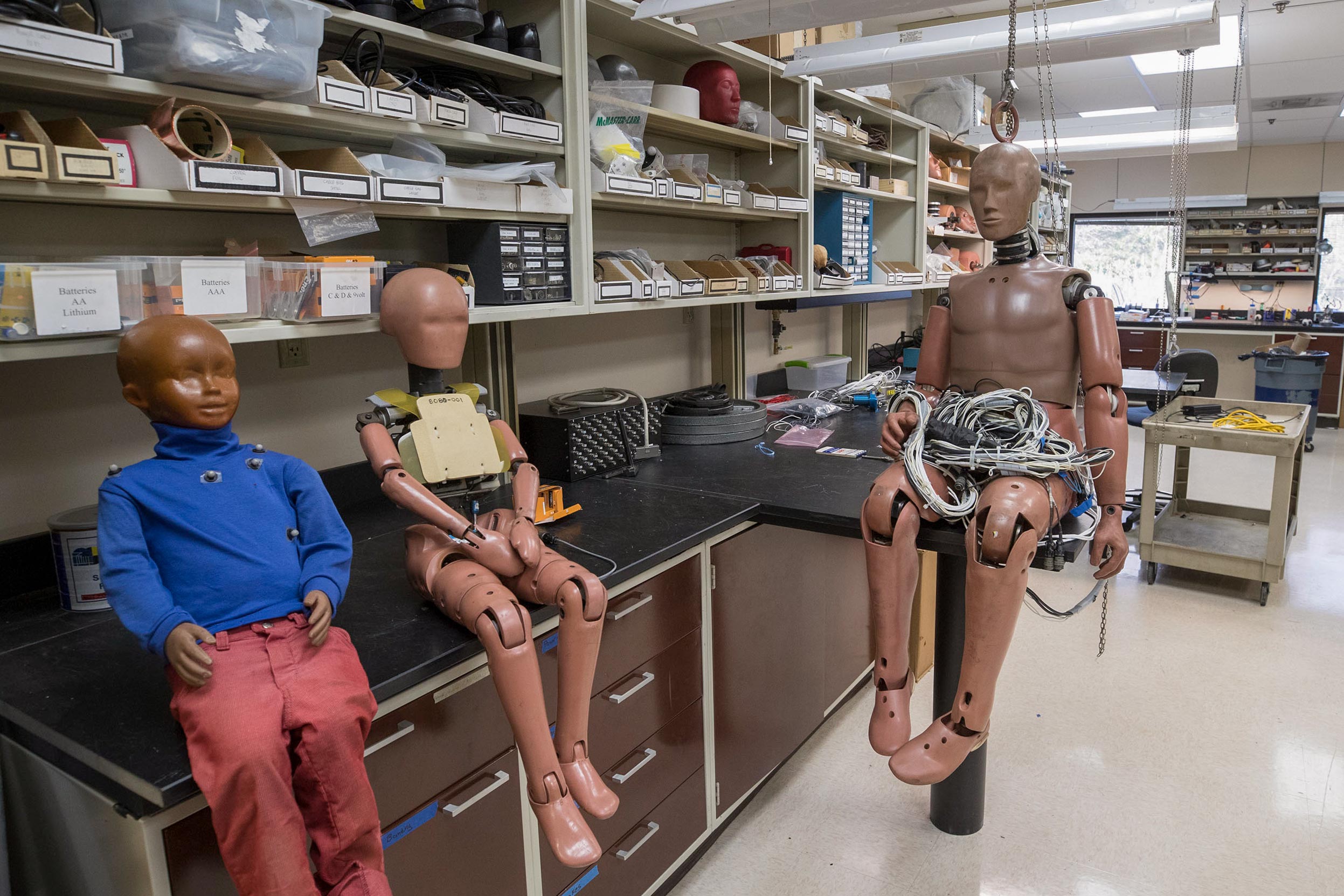 The Center for Applied Biomechanics works with a variety of crash test models to improve automobile safety. (Photos by Dan Addison, University Communications)

When a hard-hitting frontal car crash occurs, seatbelts engage and airbags deploy. It all happens in milliseconds, and the vehicle’s safety features save lives. But these safety systems are not perfect, and are not optimized for every body type and size. In fact, restraint systems in automobiles are designed for the “average” adult male: 5-feet-9-inches, 172 pounds, with a body mass index, or BMI, of 25. This is just slightly “overweight.”

That doesn’t describe most Americans, who may be much larger (or smaller). About one-third of the U.S. adult population is obese. Obesity is defined by the World Health Organization as a body mass index of 30 or greater. BMI is an individual’s mass divided by the square of height.

Crash tests and real-world crash data show that obese people don’t fare as well in frontal car crashes as people who are not obese. The obese are far more likely to suffer injury, particularly to the legs and feet, and are significantly more likely to die in a crash.

“It’s time that we develop a restraint system that does a much better job of protecting larger people with more belly fat,” said Hamed Joodaki, a University of Virginia Ph.D. candidate in mechanical engineering. “Obese people are more likely than others to die in car crashes and to suffer lower extremity injuries. We can do better than that.”

Joodaki is working at UVA’s Center for Applied Biomechanics, located in the UVA Research Park, to develop a better seatbelt design, specifically for the obese. The lab focuses on understanding how the body responds to crashes and how to improve safety features. Joodaki is using a state-of-the-art virtual human model with a body mass index of 35, designed to mimic the behavior of an obese occupant when under impact. This detailed model is based on both the overall human body and the mechanical properties of biological tissues. 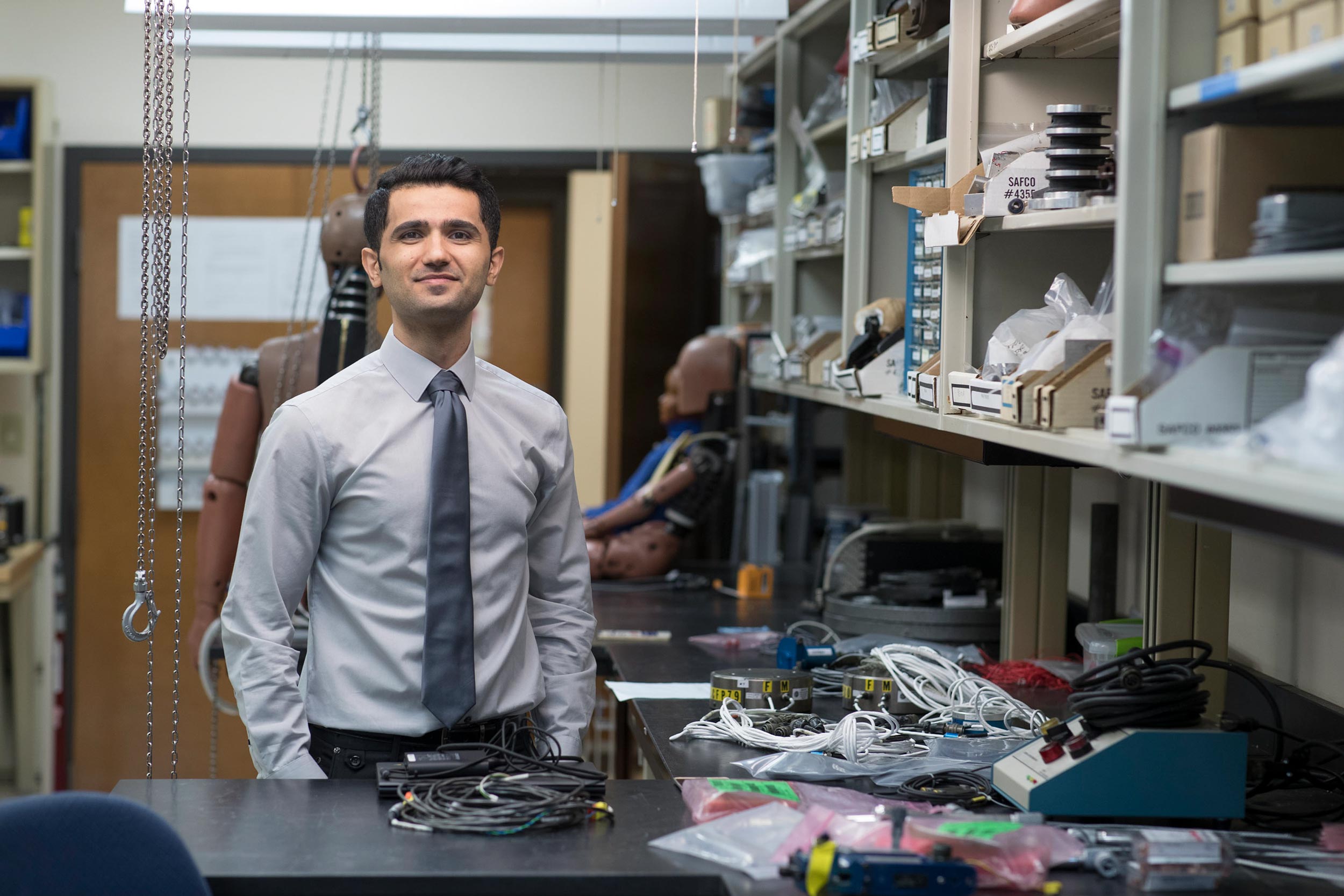 Hamed Joodaki expects to complete his Ph.D. project by the end of this year.

Using new models in conjunction with laboratory crash test data and data from real-world crashes, Joodaki’s goal is to better understand the types of injuries that obese people suffer, how they happen, and to develop a restraint system that would better protect the obese.

Joodaki said that thick fat at the belly and around the waist prevents a seatbelt from properly gripping the pelvic bones. A properly engaged seatbelt on a thinner person rests low, below the belly, and creates resistance during an impact, easing the driver or passenger slightly forward as the airbag deploys. But for a person with a large amount of belly fat, the seatbelt often does not properly hold the pelvic region and instead slips upward. The person then may slide forward from under the belt on impact, often resulting in injury when contact is made with the lower instrument panel.

“What happens is that the force of the seatbelt against the belly causes shape changes to the belly fat,” Joodaki said. “This delays the seatbelt from engaging at the right time and allows the person to move forward too far during an impact.”

In the videos above, a non-obese occupant model, left, experiences a “desired” motion – the pelvis remains close to the seatback and the torso pitches forward to get ready for a
potential airbag deployment. The obese occupant model, right, however, is not effectively
constrained by the seatbelt and experiences a large forward motion which might lead to
injurious impacts with the vehicle interior in a real crash. (Video by UVA Center for
Applied Biomechanics)

Joodaki is trying a new design that would factor in the weight of a driver or passenger to provide optimal force level and timing for seatbelt engagement during a crash. He also is considering the viability of inflatable seatbelts. The research involves using a UVA supercomputer to run hundreds of crash simulations with different restraint parameters to identify the most optimal.

“I’m so happy to be able to use engineering knowledge for improved public health,” Joodaki said. “I think we can really make a huge step forward to saving more lives.”

He expects to complete his project by the end of the year. The research is sponsored by the National Highway Traffic Safety Administration.

“Government and industry have spent years focusing on protecting occupants that represent the 50th percentile male, but it has become clear that one size does not fit all,” said Jason Kerrigan, a professor of mechanical engineering, and Joodaki’s advisor. “Hamed is integrating advanced data science techniques with traditional approaches to optimize restraint systems for improving the safety of obese occupants.”

The UVA Center for Applied Biomechanics also is conducting research to improve automotive safety for smaller women and for children, using biomechanical investigations for body sizes outside the range of the average-size male.