Even After Jan. 6, Senators Say Bipartisanship Is Present – More Than You Might Think 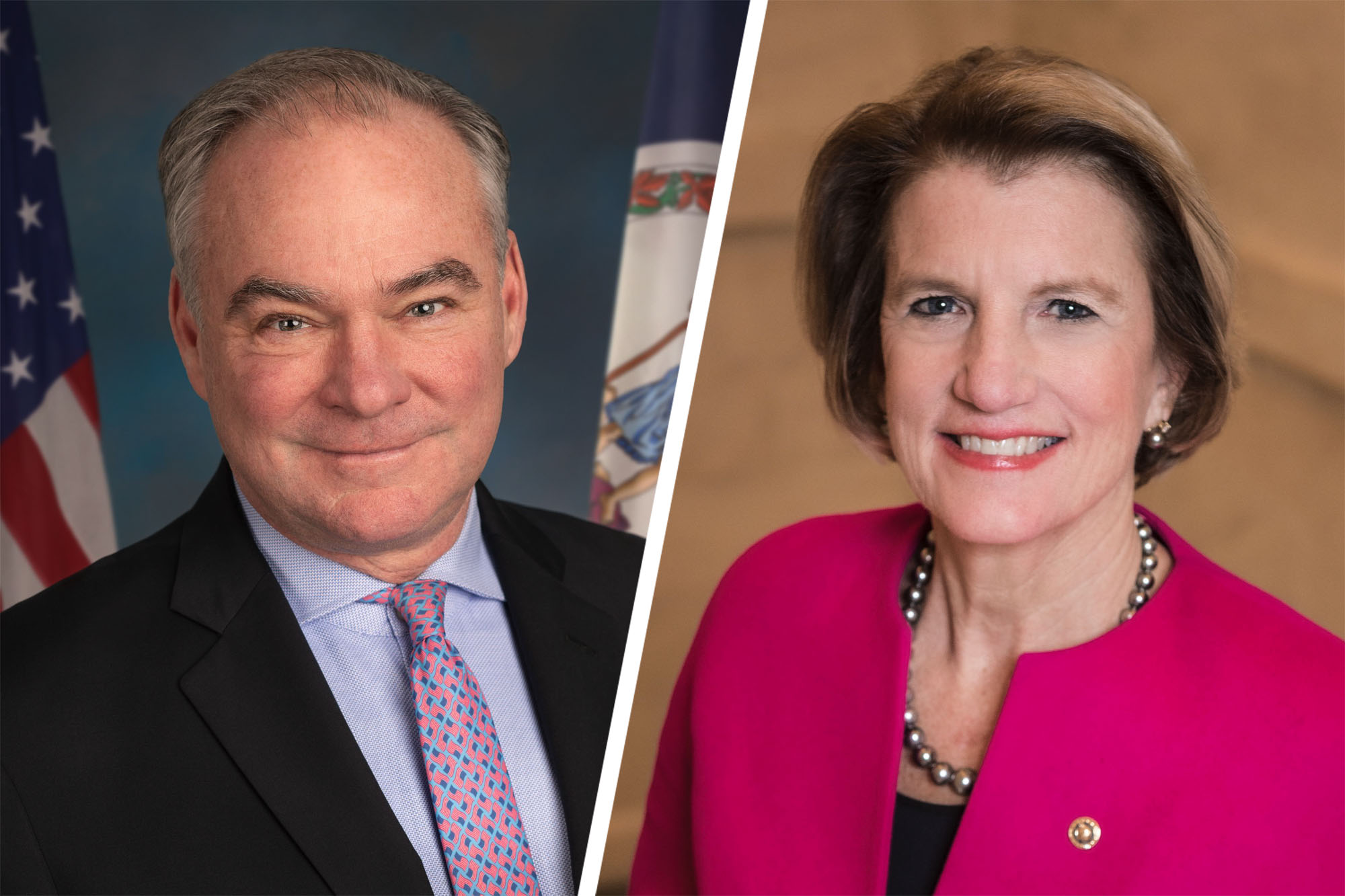 Even at a time of deep political polarization, bipartisan cooperation might be happening more often than we think.

That was one takeaway from a “Democracy Dialogues” discussion Thursday between Senators Tim Kaine of Virginia and Shelley Moore Capito of West Virginia, presented by UVA’s Institute of Democracy and co-sponsored by the College’s Democracy Initiative and the Miller Center.

UVA President Jim Ryan, Democracy Initiative co-director Melody Barnes and fourth-year student Pilar Jimenez Larre Borges, former president of the Latinx Student Alliance, moderated the discussion. It was the second of its kind; the first Democracy Dialogues, coincidentally held on Jan. 6 as rioters stormed the U.S. Capitol, laid the groundwork for Thursday’s session by exploring tensions in American democracy and, most importantly, searching for ways to come together, overcome polarization and strengthen that democracy.

“We have two main goals for these Democracy Dialogues events,” Ryan said in his opening remarks Thursday. “First, to explore critical issues facing our democracy through a variety of different perspectives, and second, to model what it means to engage in civil discourse and debate with those whose opinions may differ.”

Kaine, a Democrat, and Capito, a Republican (and UVA alumna), were able to offer some constructive examples.

Though they hail from different parties and have many policy differences, both have a record of supporting bipartisan legislation and working together on issues that affect their constitutions, such as the opioid crisis. In fact, just a few hours after the discussion, Kaine and Capito were scheduled to vote on an amendment to the Safe Drinking Water Act that Capito co-sponsored and Kaine supported.

Here are some points they discussed. Anyone wishing to view a recording of the discussion can do so at virginia.edu/live.

Both Kaine and Capito said that much of the bipartisan cooperation that happens in the Senate is not covered by the media.

“There is a lot more going on behind the scenes, in terms of back-and-forth between ‘unlikely comrades’ from both sides of the aisle,” Capito said, citing her work with Massachusetts Sen. Elizabeth Warren on the opioid crisis as an example.

“I don’t agree with Elizabeth Warren about a lot of things, but we have some common ground on the opioid crisis,” she said. “There is more of that going on that might meet the eye, or catch media attention.”

Kaine agreed. “We live in a media culture that thrives on conflict,” he said. “We still don’t do enough bipartisan work in the Senate – I am not saying that – but we might do more than people realize.”

Still, both Kaine and Capito acknowledged deep frustration among senators and among their constituents.

“The polarization we have right now leads to stagnation, which leads to frustration,” Capito said. “There are times where you ask yourself if it is worth it to keep trying – but it is always worth it, because this is a great country and because we want to see the bounty of this country reach everyone.”

Lingering Effects of the Jan. 6 Riots

It is hard to talk about bipartisanship in America without talking about one of the most partisan moments in recent memory – the pro-Trump riots at the U.S. Capitol on Jan. 6, intended to disrupt Congress’ efforts to certify President Joe Biden’s electoral victory.

Kaine and Capito both shared their memories of that day and discussed how it has affected their work since.

“Obviously, this was a day I never would have imagined and never will forget, and it should never be repeated,” Kaine said. “And yet, we still had to go to work with each other after that day.”

Though many in the crowd that day were malicious, Kaine said, others appeared to him to be taken advantage of – taken in by lies about the election, misinformation and conspiracy theories. As a society, he said, we need to grapple with how those conspiracy theories took hold.

In the Senate itself, Kaine and others have been grappling with possible ethics violations by their colleagues. Kaine was among a group of six Democratic senators who filed an ethics complaint against Republican U.S. Sens. Ted Cruz of Texas and Josh Hawley of Missouri, saying that their objections to the election certification fueled the attack on the Capitol.

“The Ethics Committee is strictly bipartisan – three [Democrats] and three [Republicans],” Kaine said. “In my view, the best thing to do was to put those concerns in the hands of as neutral a body as we have in this place, and then go back to working with my colleagues.”

Capito said the Jan. 6 events reminded her of being in Congress during the Sept. 11, 2001 terrorist attacks, feeling that something terrible was happening and not entirely knowing what was going to happen next.

“We were in the chamber, so we could not really see what was going on. … But when they took the vice president out of the room rapidly, I was watching that, and I knew something bad was happening,” Capito said.

She also expressed frustration with members of her party who objected to certifying Biden’s electoral victory – objections she did not support. In an extraordinary anecdote, Capito recounted riding to the Capitol on Jan. 6 with Capitol Police, who picked up her and a fellow senator to safely get them through the crowds. Capito’s companion was among those opposing the certification. As they drove through the crowd, that senator – Capito did not say who it was – expressed surprise that the crowd seemed to think Congress would overturn the election.

“That is what you yourself are telling them!” Capito said, recalling her astonishment and frustration. “You are not even listening to yourself!”

As hard as that day was – and both Kaine and Capito said it was even harder on some members of the Senate and many members of the House who were closer to the violence than they were – both senators said it was important to move forward and do as much as possible for their constituents as Biden took office and laid out his agenda.

Right now, some of that debate is focused on infrastructure, as the White House put forth a sweeping infrastructure plan, called The American Jobs Plan, and Republicans, including Capito, countered with an alternative.

Capito said she was encouraged by responses from the White House and fellow senators.

“There appears to be willingness to try to find a bipartisan solution,” she said. “I am a glass-half-full person and I believe it is doable.”

Kaine said Capito’s work was “laudable, even though I want the bill to be bigger,” and noted that several Republicans colleagues have told him they support parts of Democrats’ infrastructure plan, even if they might not vote for the whole thing.

“I think we are likely to end up with an infrastructure bill that will have components that have been advanced by Republicans or bipartisan groups,” he said.

“The polarization we have right now leads to stagnation, which leads to frustration. There are times where you ask yourself if it is worth it to keep trying – but it is always worth it.”

The discussion also touched on some structural problems inhibiting bipartisan work, ranging from broad concerns about the regulation of social media, hate speech and misinformation online to more specific concerns about the Senate, where Kaine, for example, believes that committees should be given more power than caucuses.

“I wish we would empower committees more, so that if something comes out of a committee with a minimum level of bipartisan support, it gets a guaranteed moment in the sun on the floor,” instead of being sidelined by political concerns, Kaine said. “Then, people might see us doing more work together.”

The senators also encouraged UVA students and other young people to get involved in politics, even if they are very discontented with American political discourse right now.

“If you [young people] were not dissatisfied and wanting better, then I would really lose hope,” Kaine said, recalling that his own concerns about the Vietnam War, civil rights, and the assassinations of President John F. Kennedy, the Rev. Dr. Martin Luther King Jr. and Robert F. Kennedy spurred his entry into politics.

“I saw young people going to the Freedom Summer, marching against the war, demanding the right to vote, doing things that were making society better,” he said. “If you are not happy with what you see, if we are not making enough progress … I just hope that some significant number of you will channel that discontent into trying to make things better.”

Capito also encouraged every member of the audience to listen as thoughtfully as they can.

“When I got my master’s in counseling at UVA, the best thing I learned how to do in counseling was to listen,” she said. “That is part of the problem today – not a lot of listening and a whole lot of talking. I really encourage students and everyone to develop those listening skills and really listen to the other side, because when you do, you might find that some differences are not as great as you might have thought.”

Meet the New Cavalier on Horseback: She’s Eager To ‘Carry On a Legacy’ END_OF_DOCUMENT_TOKEN_TO_BE_REPLACED

Monkeypox Is Spreading, But University’s Risk Believed To Be Low END_OF_DOCUMENT_TOKEN_TO_BE_REPLACED

Virginia Football – For All Virginia END_OF_DOCUMENT_TOKEN_TO_BE_REPLACED