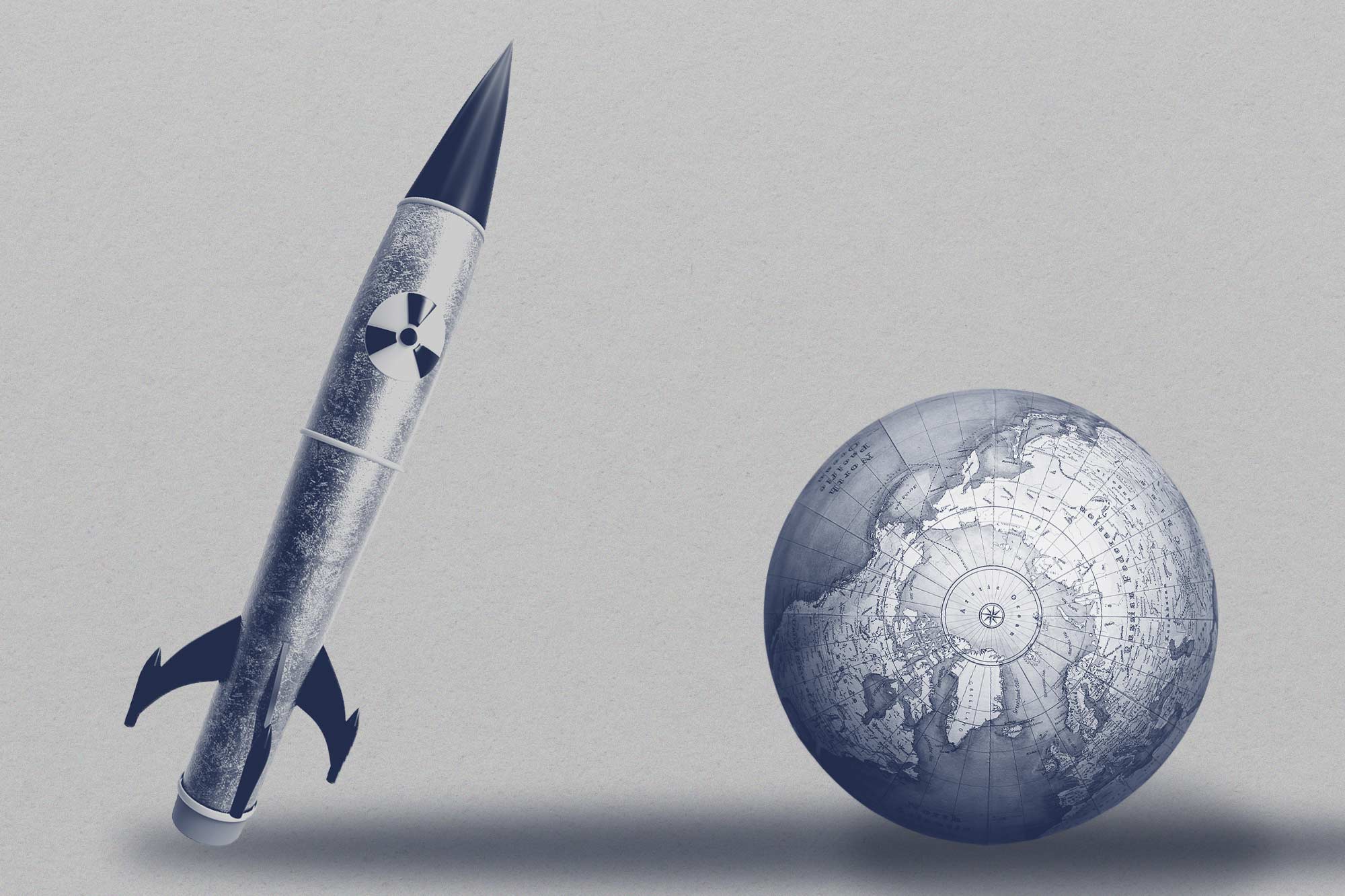 On Thursday, United States’ President Joe Biden used the petrifying phrase “prospect of Armageddon” should his Russian counterpart Vladimir Putin make good on his threat to use “all the powers and means at our disposal” to defend Russia against Ukraine. Russia holds the world’s largest nuclear arsenal.

The last, and only, time the world witnessed a nuclear attack was when the U.S. dropped a pair of atomic bombs on Hiroshima and Nagasaki, Japan, in 1945, killing an estimated 214,000 people.

“We have not faced the prospect of Armageddon since Kennedy and the Cuban missile crisis,” Biden said Thursday. “I don’t think there’s any such thing as the ability to easily use a tactical nuclear weapon and not end up with Armageddon.”

Todd Sechser is the Pamela Feinour Edmonds and Franklin S. Edmonds Jr. Discovery Professor of Politics and Public Policy at the University of Virginia. He is also a senior fellow at the Miller Center, and co-author of the book “Nuclear Weapons and Coercive Diplomacy.”

UVA Today turned to Sechser for his expert take on the events in Ukraine.

Q. What has Russia threatened to do?

A. It’s worth pointing out that Vladimir Putin has not explicitly stated whether or when Russia will use nuclear weapons. In fact, he hasn’t used the term “nuclear weapons” at all when talking about Russia’s actions. Instead, he has used phrases like “all the forces and means at our disposal” and “consequences that you have never encountered in your history.”

This is typically how leaders make nuclear threats: They do it obliquely. This is important because it leaves Putin just a little bit of wiggle room. If he doesn’t use nuclear weapons, he can save a little bit of face since he did not explicitly say that he would use them.

At the same time, there is no doubt what Putin wants the world to think when he uses phrases like “all the forces and means at our disposal.” He is hoping that the specter of nuclear conflict will intimidate Ukraine and the West into being more cautious.

A. Nuclear weapons are useful for some things and not others.

On one hand, nuclear threats seem to be useful for self-defense – for preventing aggression. Before the nuclear age, territorial aggression was quite common, and the world’s great powers routinely fought bloody wars against one another. But nuclear weapons have changed that equilibrium. Anyone contemplating invading a nuclear-armed country would have no doubt that such an attack would be met with a nuclear response.

But things get trickier when leaders try to use nuclear threats to engage in aggression. Leaders have certainly tried to use them this way. The Soviets, for example, tried to use nuclear threats to change the status quo in East Berlin in the 1950s and 1960s. Nixon used a nuclear alert in a failed gambit to bully his way to a favorable settlement in Vietnam in 1969. And India and Pakistan have attempted nuclear coercion from time to time as well. But the record here is much spottier: By and large, these threats have not worked.

A. It is notable that Russia’s repeated nuclear threats have not managed to extract any meaningful concessions from Ukraine, the United States or Europe. If anything, they have worsened Russia’s international isolation. But this fits the historical pattern: Nuclear threats are credible tools of self-defense, not aggression. Leaders sometimes have a misconception that nuclear threats are a dial they can turn up and down until they get what they want. But over and over, leaders from Nikita Khrushchev to Donald Trump have discovered that it isn’t so simple. Nuclear weapons are not a magic wand.

A. The explosive magnitude of nuclear weapons is measured in kilotons – thousands of tons – or even megatons – millions of tons – of TNT. On this spectrum, nuclear weapons can range widely. At one end are “strategic” nuclear weapons like Russia’s Topol-M ballistic missile, which carries a warhead with an explosive yield of perhaps 500 kilotons. The largest warhead in the U.S. nuclear arsenal, the B83, has a yield of 1.2 megatons.

At the other end are shorter-range nuclear systems, sometimes called “tactical” or “battlefield” nuclear weapons, which generally have explosive yields of a few dozen kilotons or less. These are the weapons that Putin would be most likely to use in Ukraine. But even a few kilotons are still incredibly powerful by any measure: The atomic bomb that destroyed Hiroshima in 1945 was about 15 kilotons.

Q. Are there considerations beyond the size of the weapon?

A. The more important question is not the size of the weapon, but the target. A lower-yield weapon detonated in a city could still cause tens of thousands of casualties; a massive nuclear warhead targeted at a remote underground bunker would cause comparatively few casualties.

Russia could attack Ukrainian leadership targets, military targets, or even conduct a so-called “demonstration” strike over an uninhabited area. Worst of all, it could attack a Ukrainian city with a nuclear weapon, hoping to cause widespread terror and coerce Ukraine into surrendering.

A. Using nuclear weapons is not going to give Russia a magic escape route from this war. Attacking a city with nuclear weapons would be a horrifying and barbaric act that would permanently transform Russia into an isolated pariah state. It is worth remembering that nuclear weapons have not been used since 1945. Although Putin would like us to believe otherwise, there is a strong precedent today against using nuclear weapons – some scholars have even called it a “nuclear taboo.”

Russia could instead use a nuclear weapon against a military target to try and turn the tide of the war in its favor. But just one nuclear weapon used in this way would accomplish little – Russia would probably have to use several in order to achieve any meaningful results on the battlefield.

Russia’s best hope would be to conduct a nuclear strike that is small enough to avoid a massive political backlash, but significant enough to raise the specter of further escalation, scaring Ukraine and the West into submission. That is a very difficult – maybe impossible – needle to thread.

Q. Would the United States respond with nuclear weapons?

A. The United States would have a range of responses available – it would not necessarily need to respond with nuclear weapons. In fact, retaliating with nuclear weapons might weaken the international coalition against Russia, making it harder to coerce Russia to stop.

Instead, the United States and NATO could retaliate with conventional strikes against Russian military targets, either inside Russia or in Ukraine. By keeping the response limited, the United States could continue to deny Russia’s aims in Ukraine while avoiding threatening the integrity of Russia’s territory, its nuclear forces, or its regime.

Q. What would be the potential economic fallout if Russia were to use a nuclear weapon against Ukraine?

A. I think the major consequences would be political for Russia. Nuclear weapons have not been used in wartime since 1945. And I think a lot of people sometimes forget that. But it has been that long, and the precedent against using them in war is very strong now, such that if Russia were to break that taboo and cross that line for the first time in 77 years, the political consequences for them, I think, really would be catastrophic.

That would be political isolation, major economic sanctions and Russia would be turned into a pariah state. I don’t think you can really limit the consequences to just economic. You’d be talking about a comprehensive isolation of Russia in the international system. I think they would become a state maybe on the level of North Korea in terms of international isolation.

Q. At the beginning of the war Putin announced his country would place its nuclear deterrent on high alert. Why is there more concern about nuclear weapons now?

A. I think the big change between February and March and today is that the war has gone very poorly for Russia. And it wasn’t clear that that was going to happen in February and March. In fact, I think there was a widespread expectation that Russia would win in some way and at least be able to seize and control a large chunk of Ukrainian territory. And that is not necessarily obvious today.

The war has gone so badly for them and has become such an open wound and an embarrassment for Vladimir Putin that we are now considering the possibility that he might have to resort to more extreme measures just to avoid humiliation.