Faculty Spotlight: New Diagnostic Tool to Aid in Identifying Leading Cause of Blindness 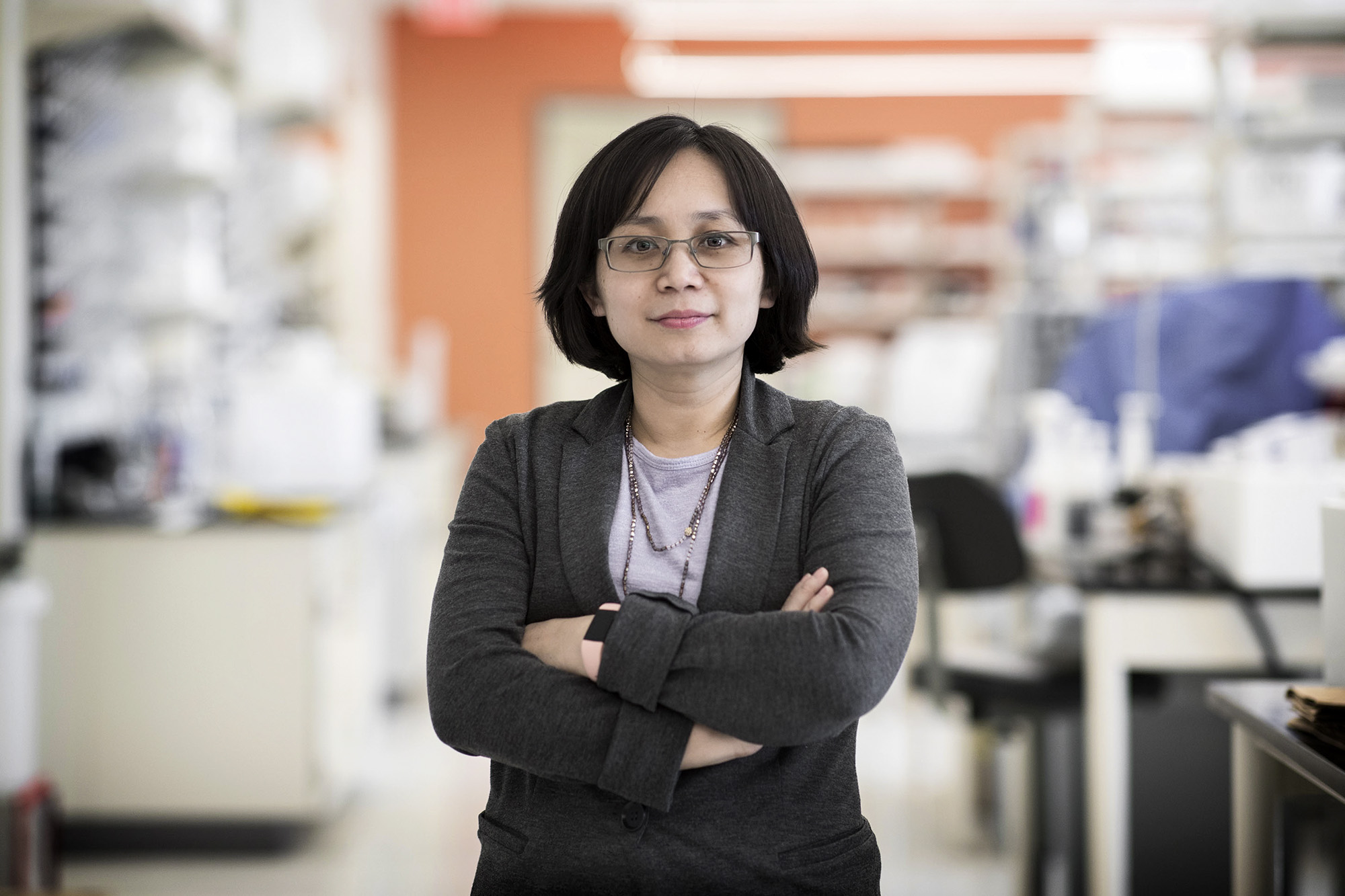 In the summer of 2017, Xiaorong Liu came to the University of Virginia as an assistant professor of biology and psychology, though it was not her first time on Grounds.

In room 264 of Gilmer Hall, where she taught her first undergraduate psychobiology course, she recalls sticking labels on the same lab benches 20 years earlier as a graduate student.

In 1997, Liu received her doctorate from UVA as part of a lab studying how retinal neurons in the eye coordinate with circadian activity, passing visual information to the brain. Over the last two decades, Liu has continued studying the retina, a piece of tissue in the back of the eye responsible for processing visual information.

Following her doctorate, Liu conducted post-doctoral research at the University of California, San Francisco, from 2003 to 2007, then moved on to Northwestern University as a research assistant professor in neurobiology and physiology, where she began her own laboratory in 2008 studying the development and function of the visual system. Gradually shifting from development to disease, Liu started a tenure-track position in ophthalmology at Northwestern in 2011, where she expanded her research to investigate the degeneration of the visual system in mouse models due to glaucoma.

Now an associate professor going on five years of research and collaboration at UVA, Liu has published six research articles this year alone, the most recent of which was featured in the Journal of Neuroscience. As part of a trifecta of technological development, animal models and clinical application, Liu has established a new retinal imaging technique that will enable earlier diagnosis of the world’s leading cause of irreversible blindness.

Specifically, Liu is looking at glaucoma, a disease caused by pressure buildup in the eye resulting in the death of retinal ganglion cells, the neurons that reside on the retina’s inner surface and are responsible for transmitting light to the rest of the brain. The disease, which affects up to 10% to 15% of the adult population, initially causes black spots in one’s vision where neurons have died, and progresses toward tunnel vision and eventual blindness. Unlike other eye conditions that can be fixed by a transplant, such as cataracts or cornea damage, retinal ganglion cell death is irreversible.

“Neural damage is probably the most impactful damage to your vision,” Liu said. “When neurons die, they die. It is like brain damage, and you cannot rebuild your brain.”

Since glaucoma occurs in the back of the eye, imaging it has proven to be a hard task for clinicians. Despite decades of research, there is still a lack of sensitive and specific diagnostic tools for the disease, and late diagnosis has become one of the leading causes of blindness due to glaucoma. Right now, the best diagnostic tool is to measure the bulk thickness of the retinal nerve fiber layer, with the idea that as retinal ganglion cells die, the layer of their axons will start to thin.

Though this is true, a multitude of factors minimize the indicator’s specificity. First, thinning may not be detectable until about 30% to 50% cell death, at which point the disease’s progression may be past the point of recovery. Second, other components in the layer itself, such as supporting cells and blood vessels, make it complicated to single out retinal ganglion cell death as the root cause of thickness changes. Finally, every human has a different baseline, making it hard to determine how many retinal ganglion cells have actually died. While one person may start out with 2 million of the neurons, another may only have 800,000.

“It is not a good indicator,” Liu said. “With individuals, we want to build baselines with every single person, rather than use the average of the entire population. It is a good reference point, but in terms of monitoring disease development, you have to have your own baseline.

“If we can give everyone a more specific indicator, we have a better chance of telling whether something has gone wrong in the retina.”

In order to track the death of retinal ganglion cells, ophthalmologists use optical coherence tomography, or OCT, a non-invasive imaging test that uses light waves to take cross-section images of the retina. Though the technology aids in diagnosis and monitorization of disease, it lacks the resolution needed to track individual retinal ganglion cell axon bundles. Clinicians must instead average a multitude of snapshots from different points in time to gain a clear enough image.

This is the issue that Liu began to tackle almost five years ago. As one of two places in the U.S. with access to a new retinal imaging system developed by Zhang lab at Northwestern University, called vis-OCT, Liu and Zhang labs together have established a new imaging modality called vis-OCT fibergram, or vis-OCTF, which tracks retinal ganglion cell health in vivo. Unlike conventional OCT technologies, the new development has the improved resolution to zoom into individual retinal ganglion cell axon bundles.

By utilizing the non-invasive imaging technology on mice, Liu has developed ways to collect information from animal retinas, establishing a baseline for what clinicians should be measuring in the eyes of humans in order to differentiate a glaucoma-ridden retina from a healthy one. With preliminary research now under institutional review board scrutiny, Liu expects clinical studies to come very soon.

“We zoom into the retina, into one type of neuron, and we want to develop a new biomarker so that we can monitor that type of cell in real time and improve the resolution and contrast,” Liu said. “This will allow us to see better, and hopefully in the long run we can give patients better indications [of disease], so we can develop a better treatment and prevention plan.”

Last year, Liu began collaborating with Dr. Peter Netland, a glaucoma specialist and chair of UVA’s Department of Ophthalmology, to push her research into the clinical setting. With a long history of treating glaucoma patients, Netland said that the field of ophthalmology is poor at identifying glaucoma in a population-based way. After initial speculation that a patient may be developing glaucoma, multiple years may go by with sporadic doctor visits before a definitive diagnosis can be made.

“There are some measures that Liu is looking at and developing that may be able to pick up glaucoma before we see clinical signs of it, because the damage may precede the loss of the tissue,” Netland said. “[Vis-OCTF] has implications for diagnosis, monitoring treatments and also for screening, looking at patients across the population.”

As a clinician who often utilizes conventional OCT, Netland said the development of higher-resolution imaging is a significant advance in the field, and that it was made possible by Liu’s ability to translate basic scientific advances into actual application in human disease – a rare skill in the field of medicine.

“A lot of things have been thought about and developed over the years, but not all of them make it all the way through the process,” Netland said. “It takes someone like Dr. Liu to be able to put it together, get the support to get it through the early stages, and be able to translate that into human use.”

Right now, Liu and her lab are focusing on the superficial neuron layer, gathering more information about retinal ganglion cell axon bundles to establish an accurate indicator of how the layer responds to disease. By understanding how the neurons develop and function, researchers will be able to understand what goes wrong in a diseased condition and whether glaucoma can be prevented before the onset of catastrophic blindness.

Though the applications of her research are far from over, Liu is reminiscent of the many years it took to reach novel developments.

“You work on something unknown, and it is always nice to figure out a new direction or answer,” she said. “Whether simple or complicated results, it is something you cannot predict on a daily basis. There is a lot of frustration, but eventually you build something you are proud of.”

It’s Copperhead Season in Virginia. Here Is What You Need to Know END_OF_DOCUMENT_TOKEN_TO_BE_REPLACED

What’s Next for UVA’s Class of 2022? END_OF_DOCUMENT_TOKEN_TO_BE_REPLACED