At a Familiar Gathering Place, Students Wrestle With Unfamiliar Emotions 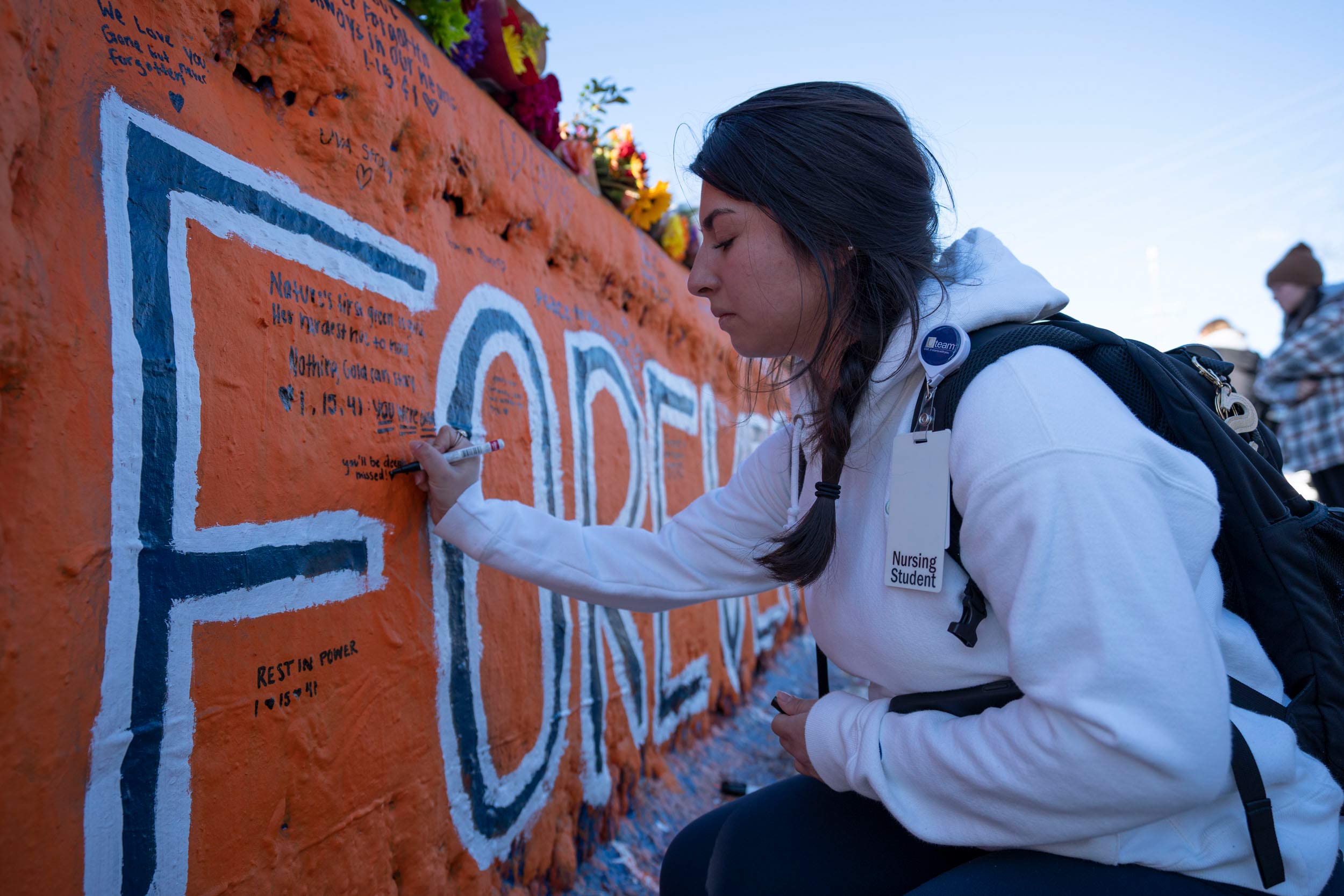 At a Familiar Gathering Place, Students Wrestle With Unfamiliar Emotions

Students by the dozens, bundled against a November chill, wrote messages of remembrance on the University of Virginia’s landmark Beta Bridge Wednesday afternoon, three days after a gunman killed three football players in a shooting spree and wounded two other students just a few steps away.

“Even if you didn’t know the victims, you know people who know them,” Samantha Simmons, a second-year student, said. She purchased flowers from Trader Joe’s in the morning to place on the bridge, a landmark that has been University students’ informal billboard since the 1970s. “It’s such a nice and beautiful thing for everyone to be together during this time and to see the community come together.”

Students painted the bridge’s concrete wall in Cavalier orange and added jersey numbers and initials in blue and white to honor Lavel Davis Jr., Devin Chandler and D’Sean Perry, the three student-athletes shot to death Sunday night on a bus after a class field trip. Police charged another student with the murders.

Students passing over the bridge were invited to use black markers to write messages on the wall.

“This was a tragic loss of life,” said Noyanika Vattathara, a second-year student who helped organize the bridge signing. “Gun violence is an issue that is not OK. We have been dealing with it for so long. … We are creating a space for students to write a message of support so people who walk by know that there is a community of support here for everyone.”

Graham Bucko, a third-year student, said his thoughts have been awash in a flurry of emotions since Sunday night.

“I wrote, ‘May we lead lives that honor their memory.’ I wrote this because, obviously, we can’t change what happened to our community,” Bucko said. “But what I am thinking about is how I am going to try to make an impact with my life that would be able to honor them in some way.

“I hope they would be proud if they were still here.” 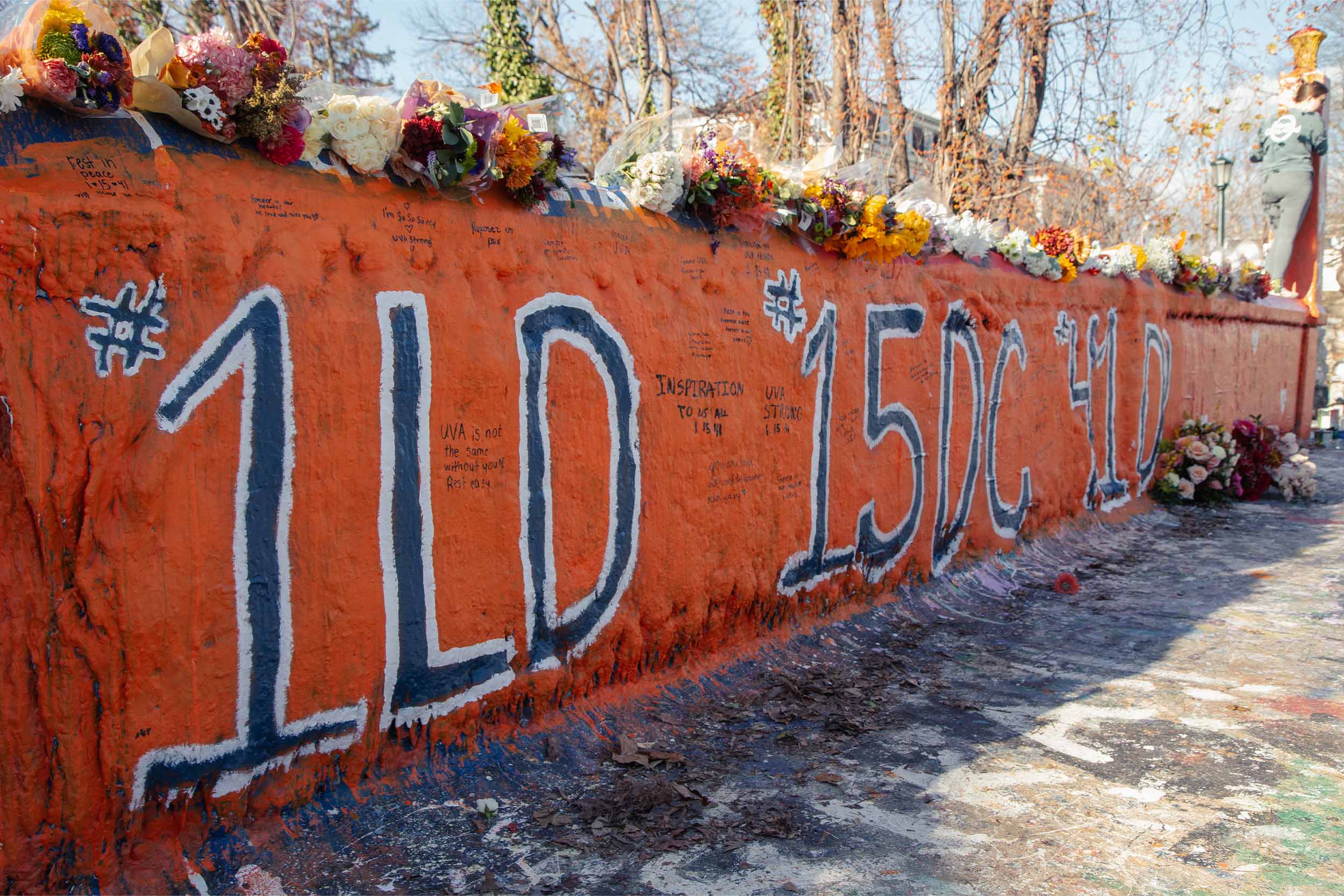 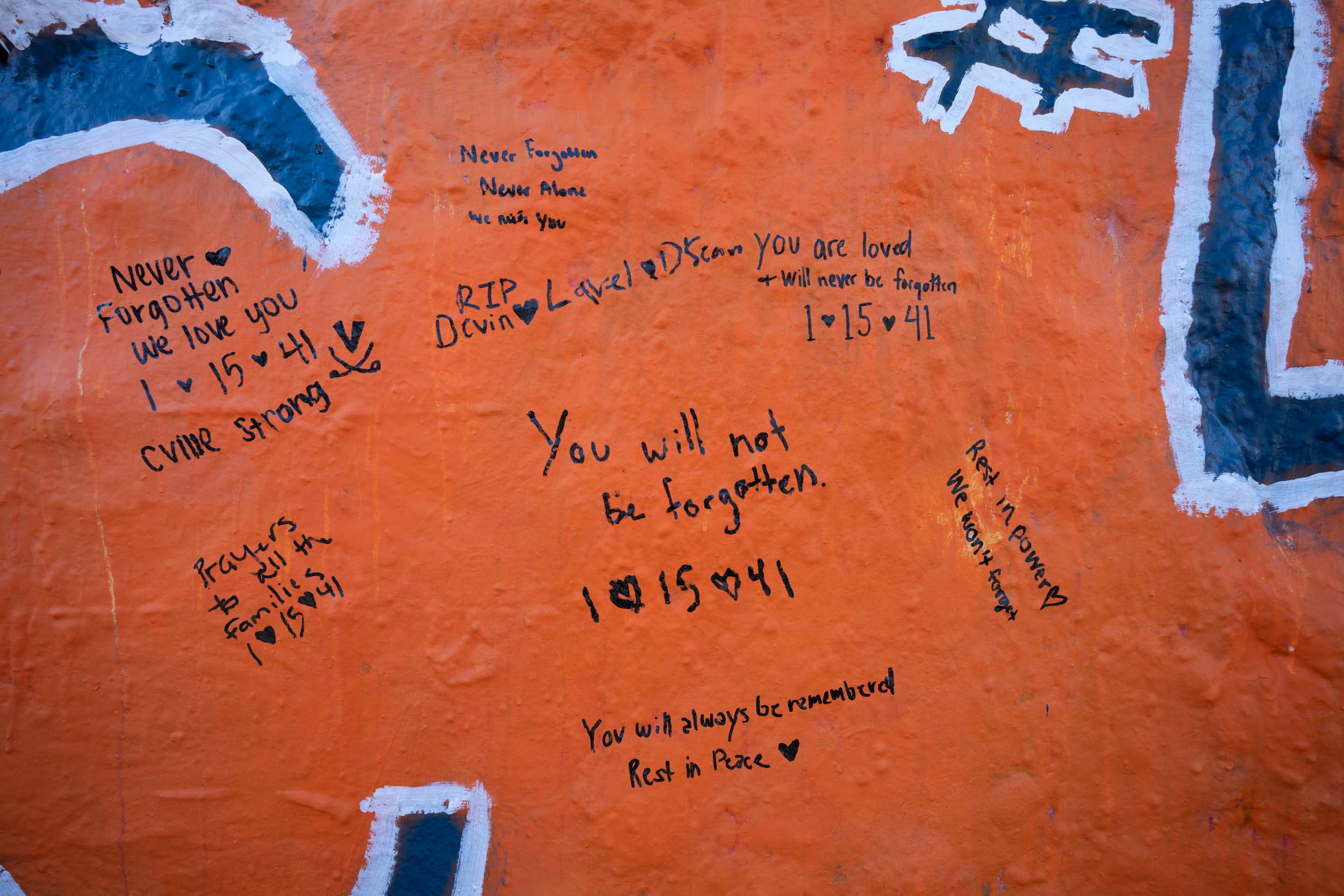 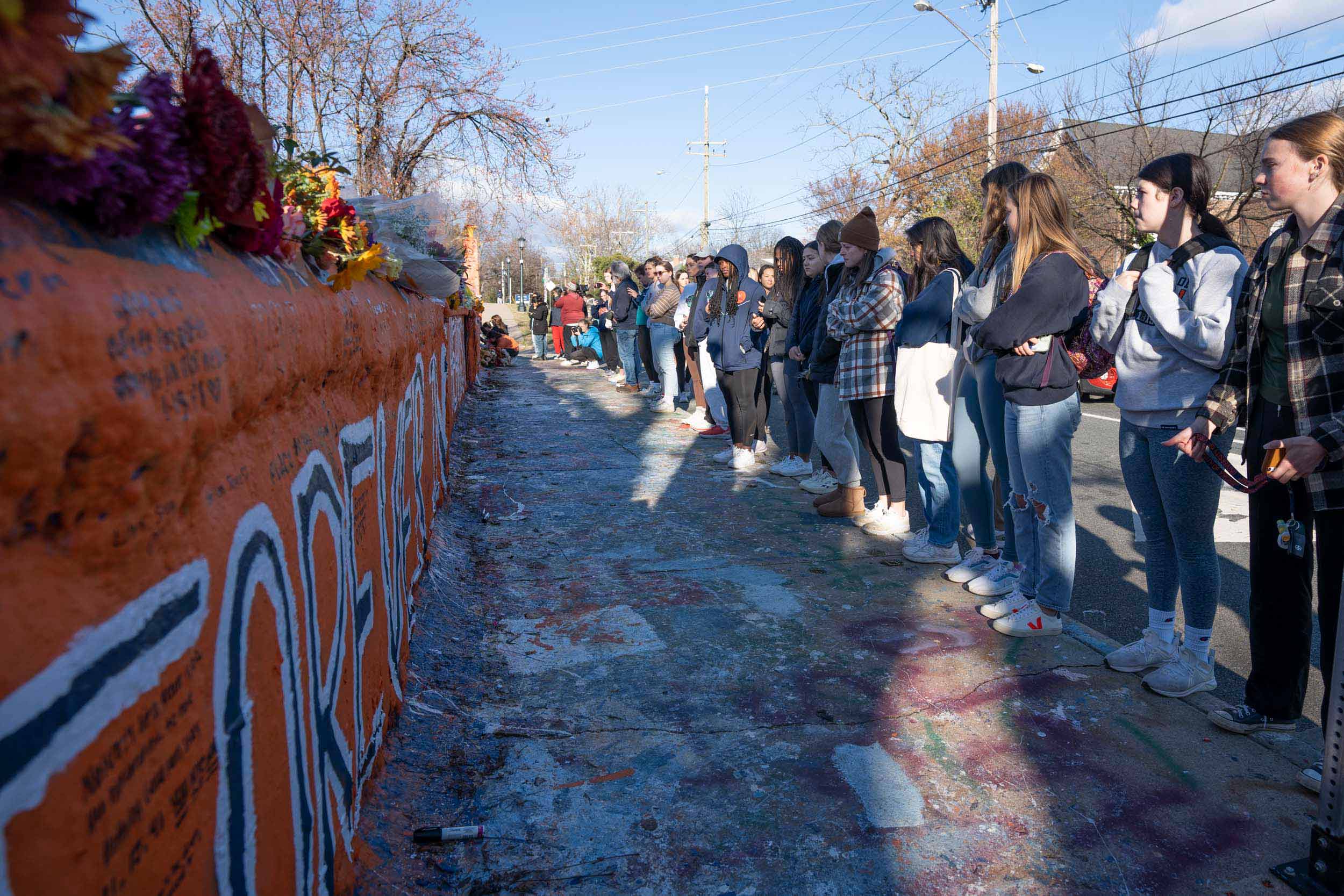 Students pause on Beta Bridge to reflect on the tragedy that shook the University this week. (Photo by Erin Edgerton, University Communications) 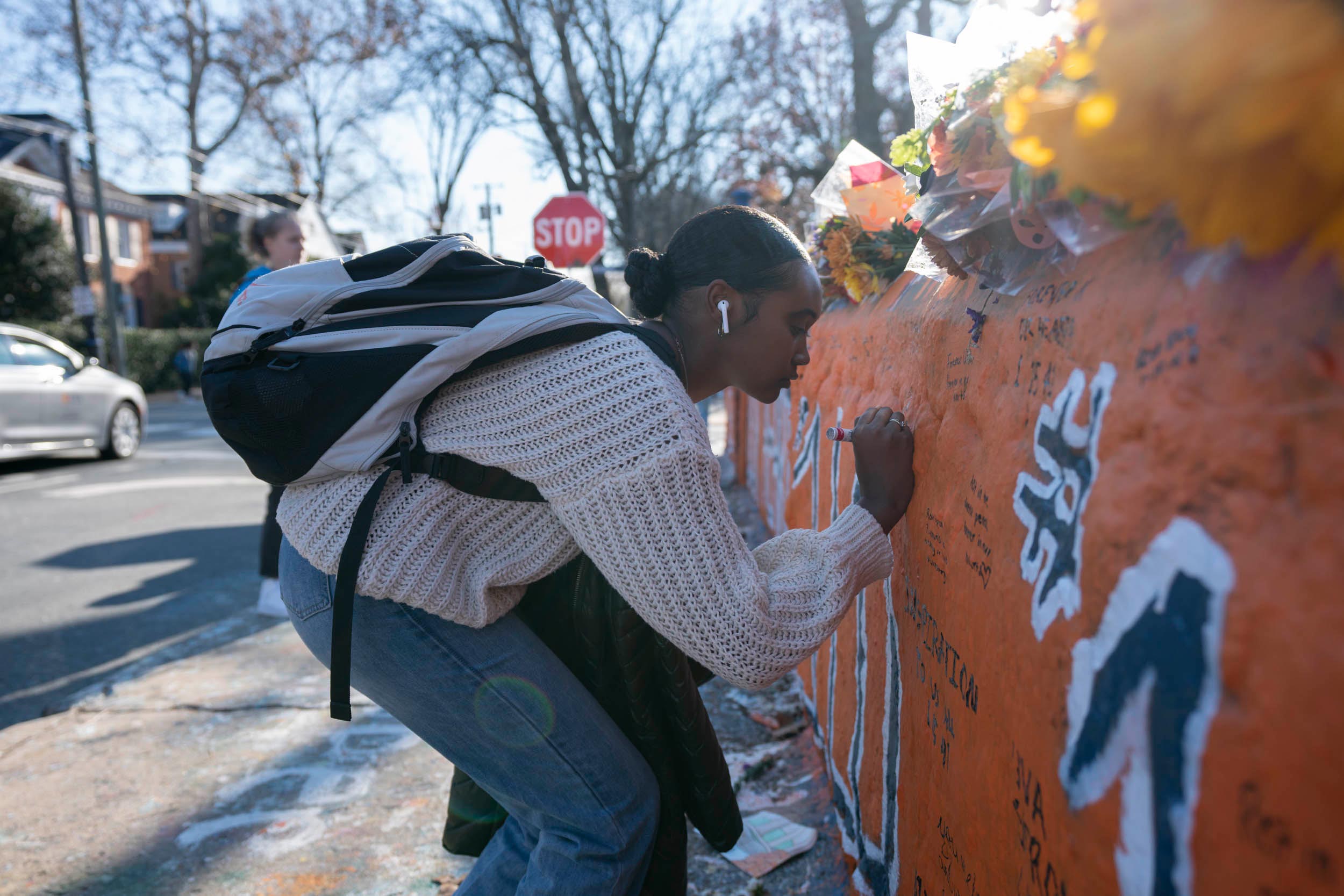 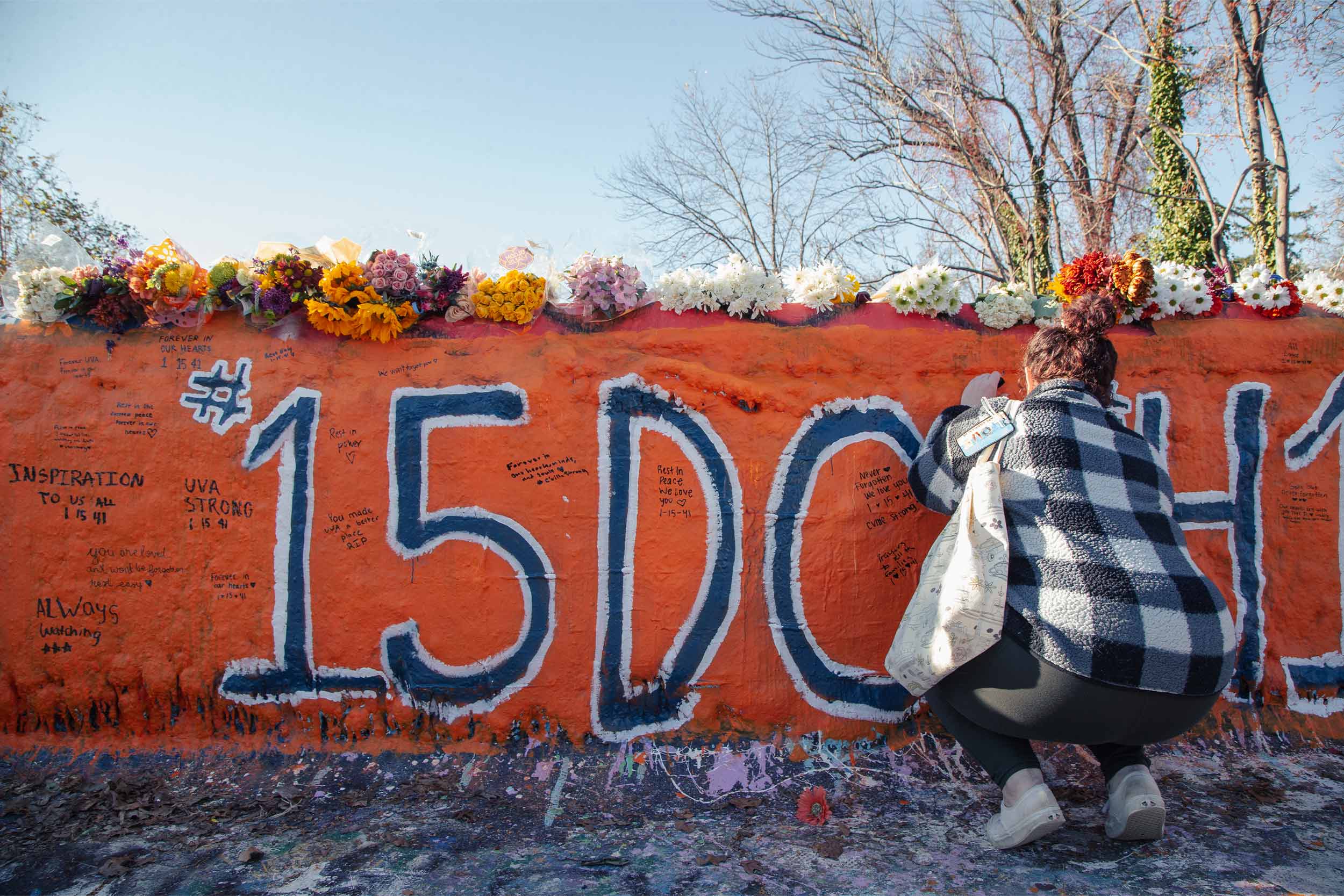 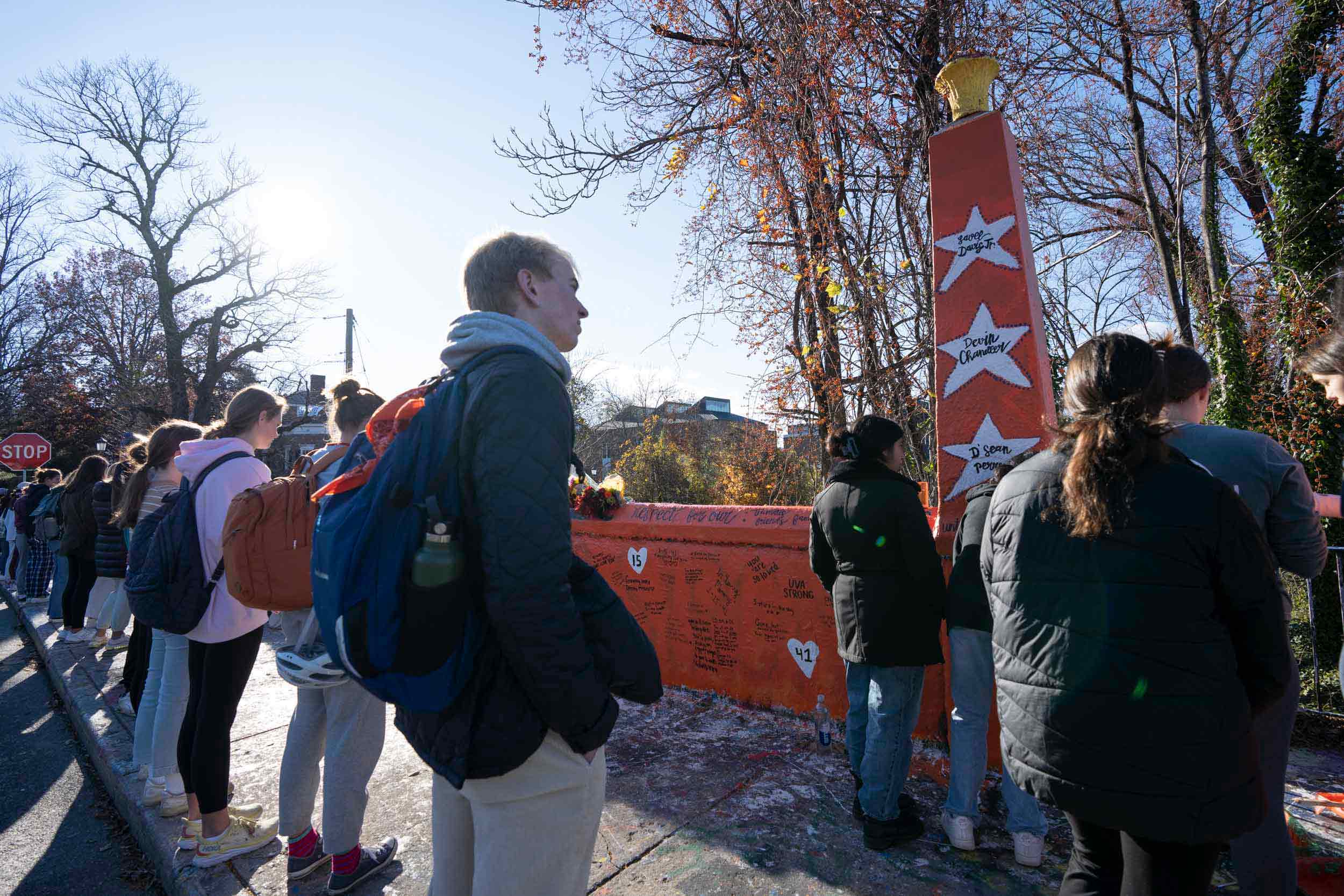 The memorial on Beta Bridge is one of several that students have created in the days since the shootings. (Photo by Erin Edgerton, University Communications) 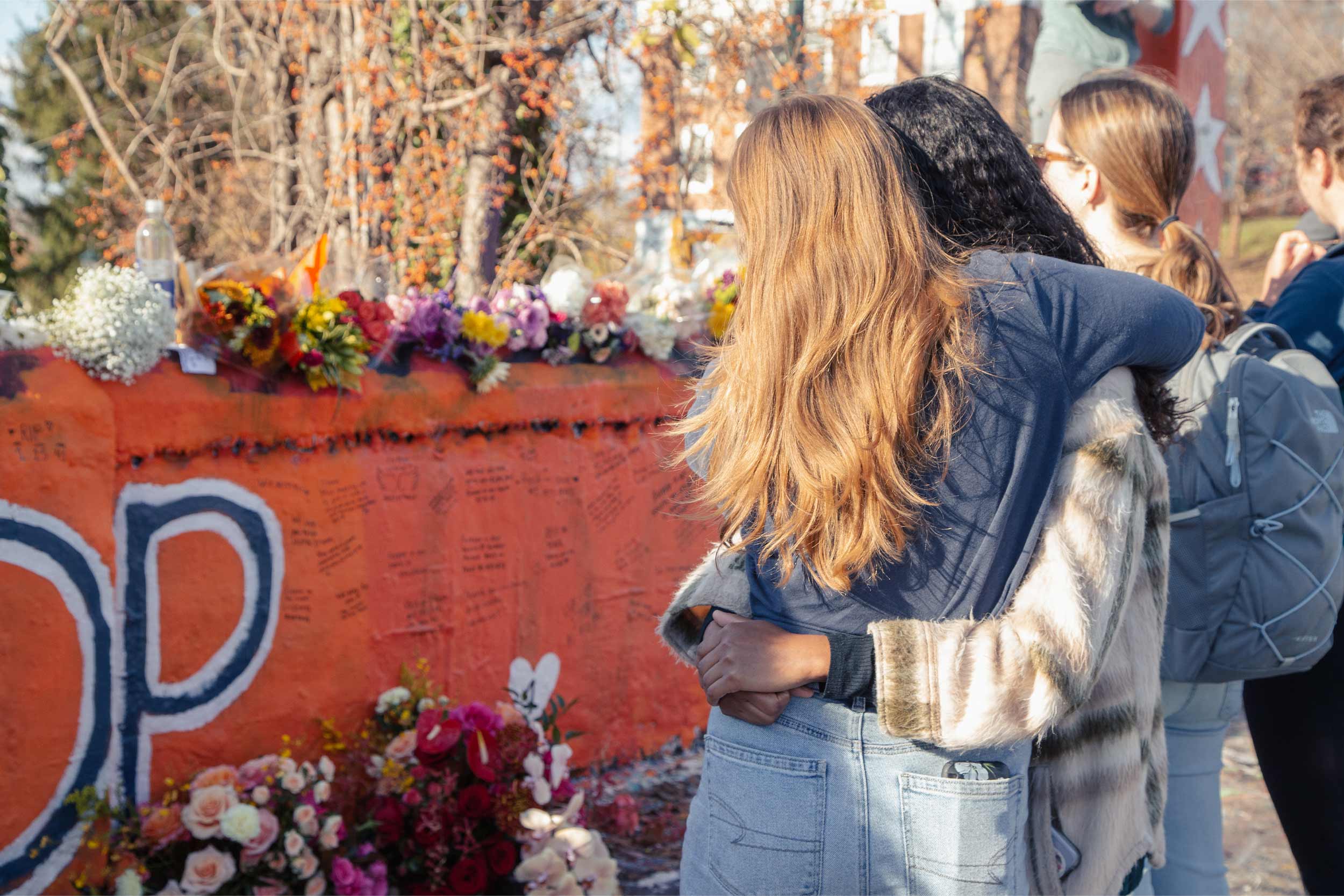 Two students console each other on Beta Bridge in a moment of grief. (Photo by Emily Faith Morgan, University Communications) 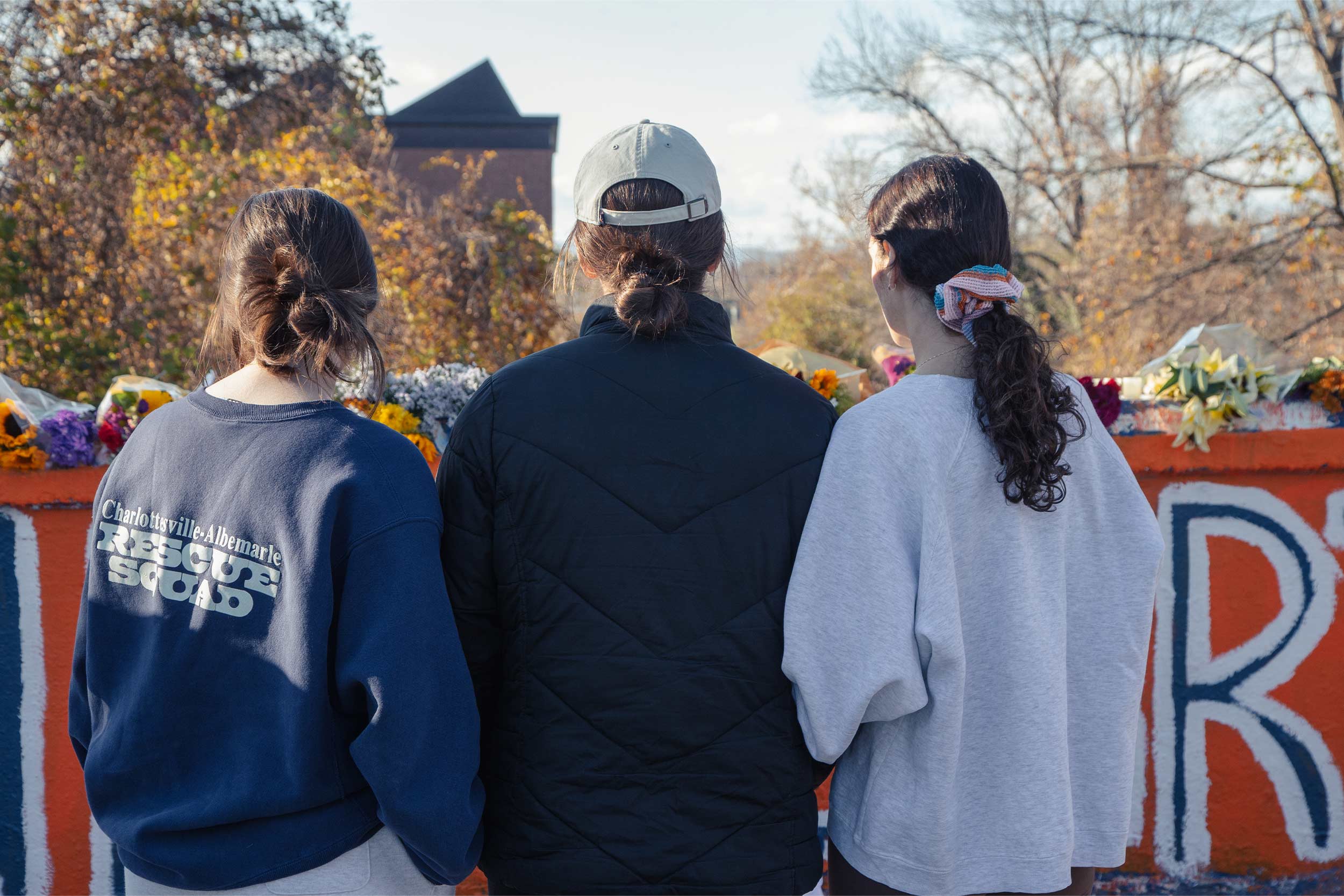 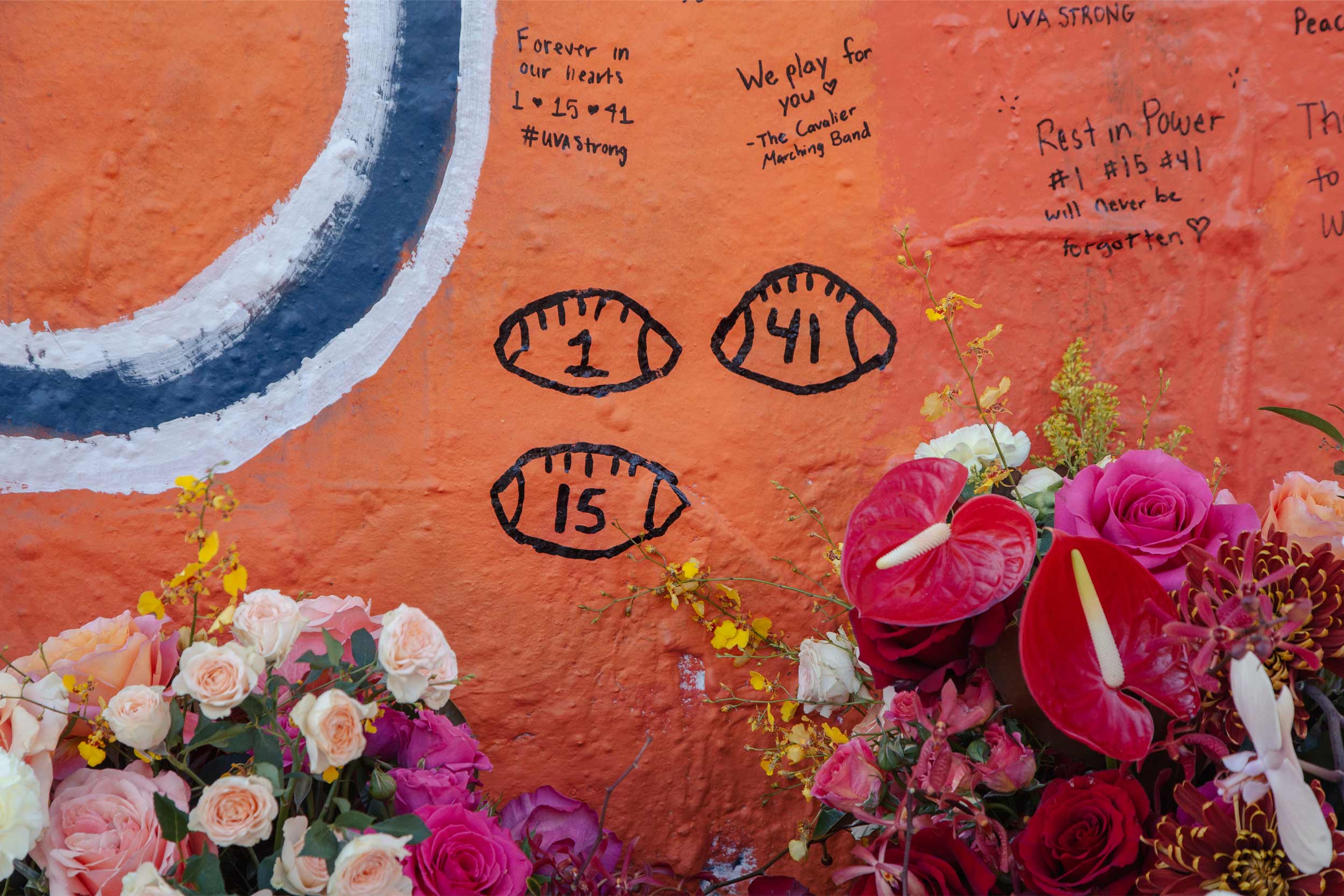 Flowers and hand-drawn footballs are some of the ways students honored their slain classmates. (Photo by Emily Faith Morgan, University Communications) 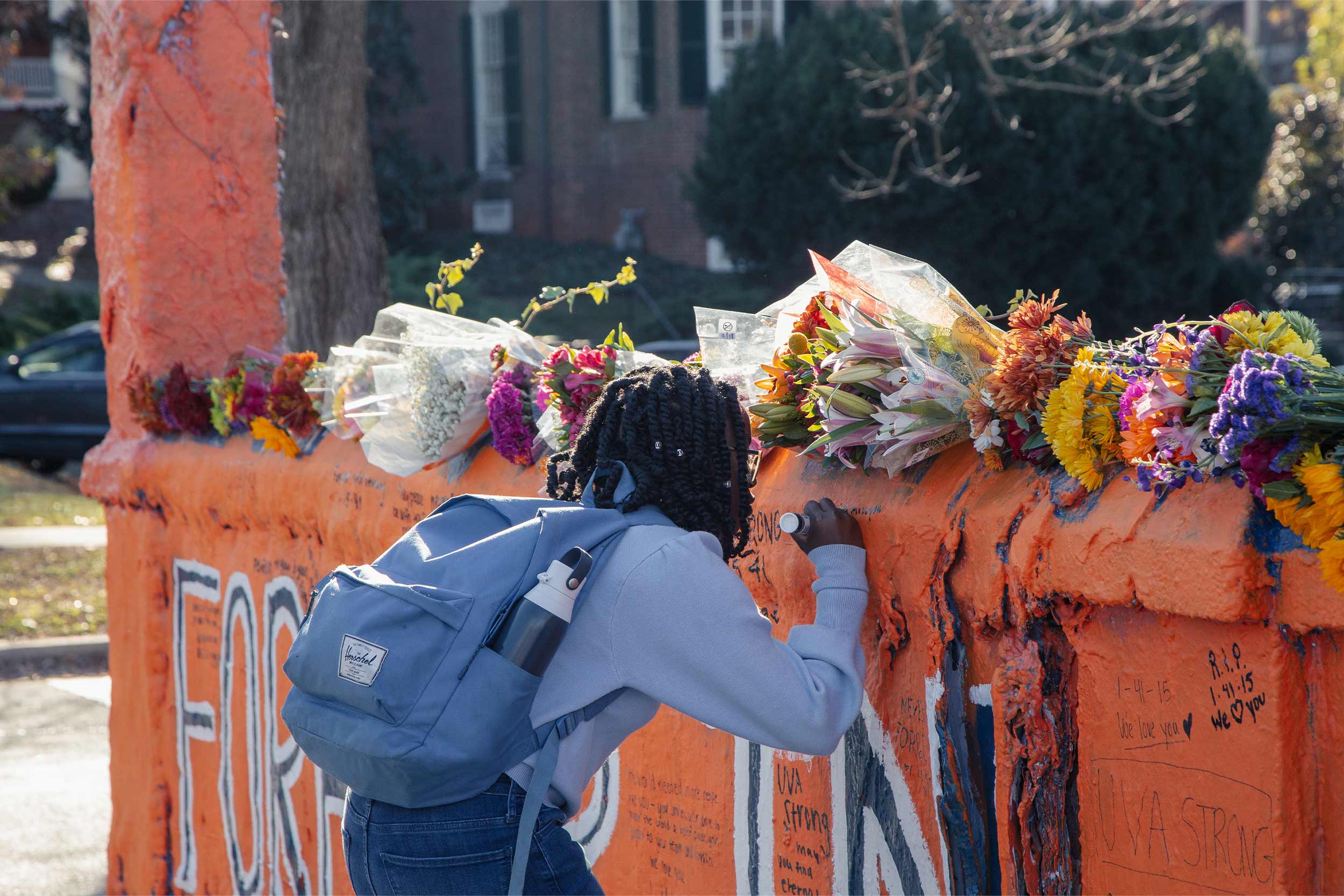 A student adds her condolences to the hundreds of others that filled the wall on Beta Bridge Wednesday. (Photo by Emily Faith Morgan, University Communications) 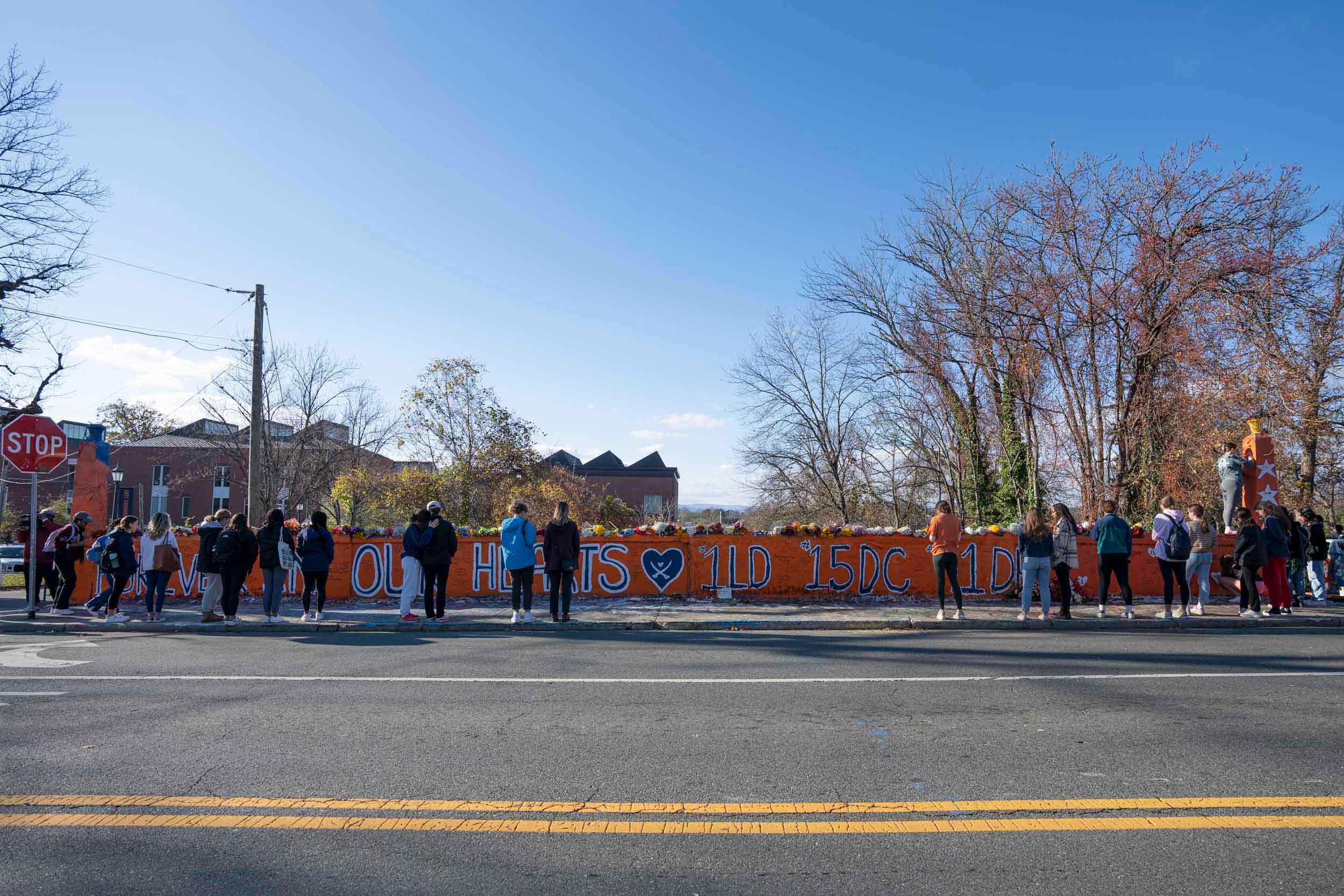 Behind the students, the message on Beta Bridge reads, “Forever in our hearts,” followed by the numbers and initials of the football players who died Sunday.