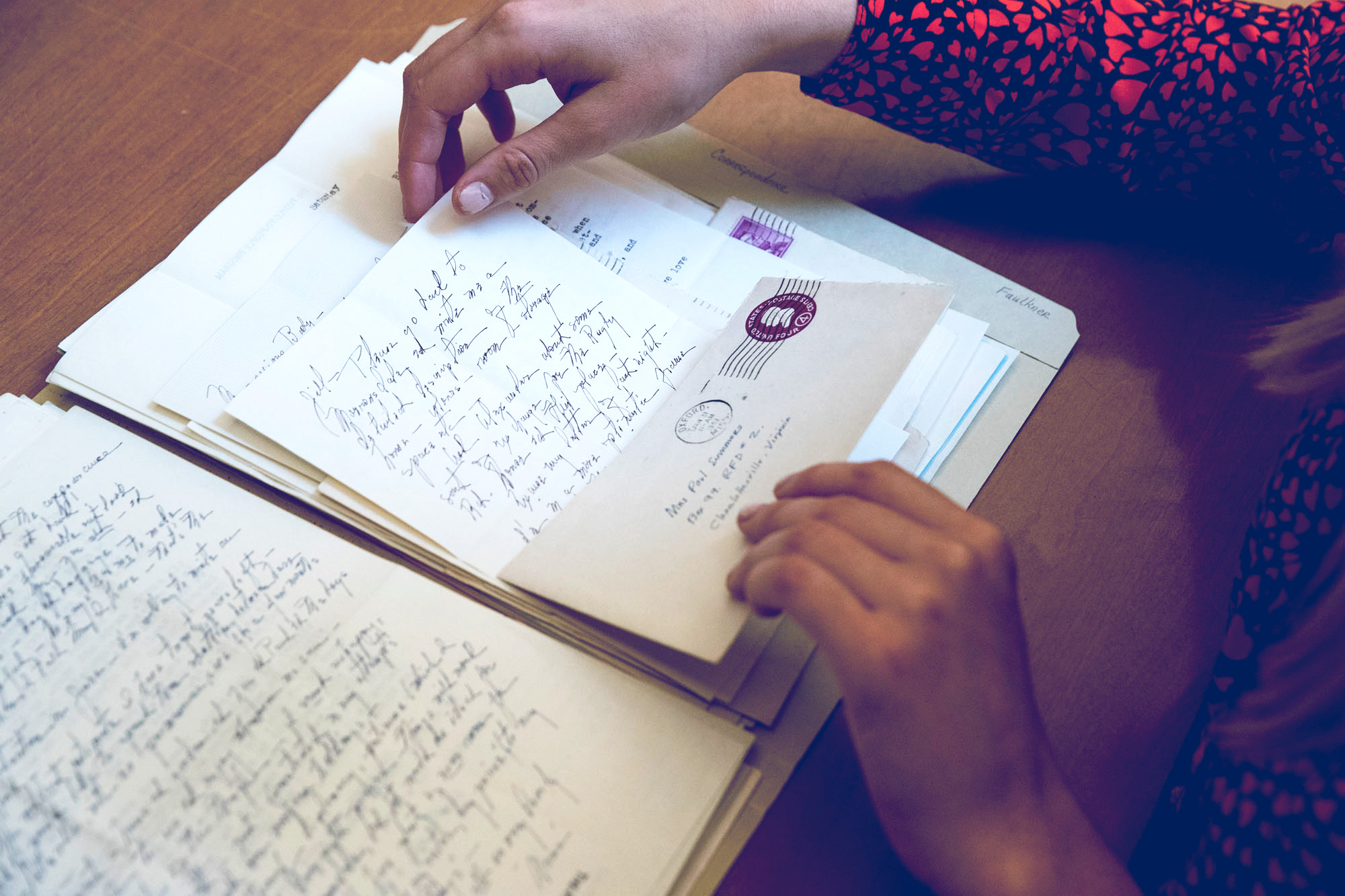 Reading William Faulkner’s letters to his daughter, Jill, appealed to University of Virginia student Marcella “Ellie” Sohm, because she, too, was the same age in college at the time the well-known writer wrote to his only child. Plus, she “leaped at the opportunity to do some firsthand research of my own on Faulkner,” she said.

Sohm, a fourth-year student from New York City double-majoring in English and women, gender and sexuality studies, researched and wrote about how Faulkner came across as a father in letters sent to his daughter while Jill attended a two-year college in Massachusetts in the early 1950s – letters now preserved as part of the William Faulkner Collection in UVA’s Albert and Shirley Small Special Collections Library.

Faulkner, who served as UVA’s first writer-in-residence in 1957 and 1958, and Jill, who resided in Albemarle County after getting married, donated the letters and other documents to the library. 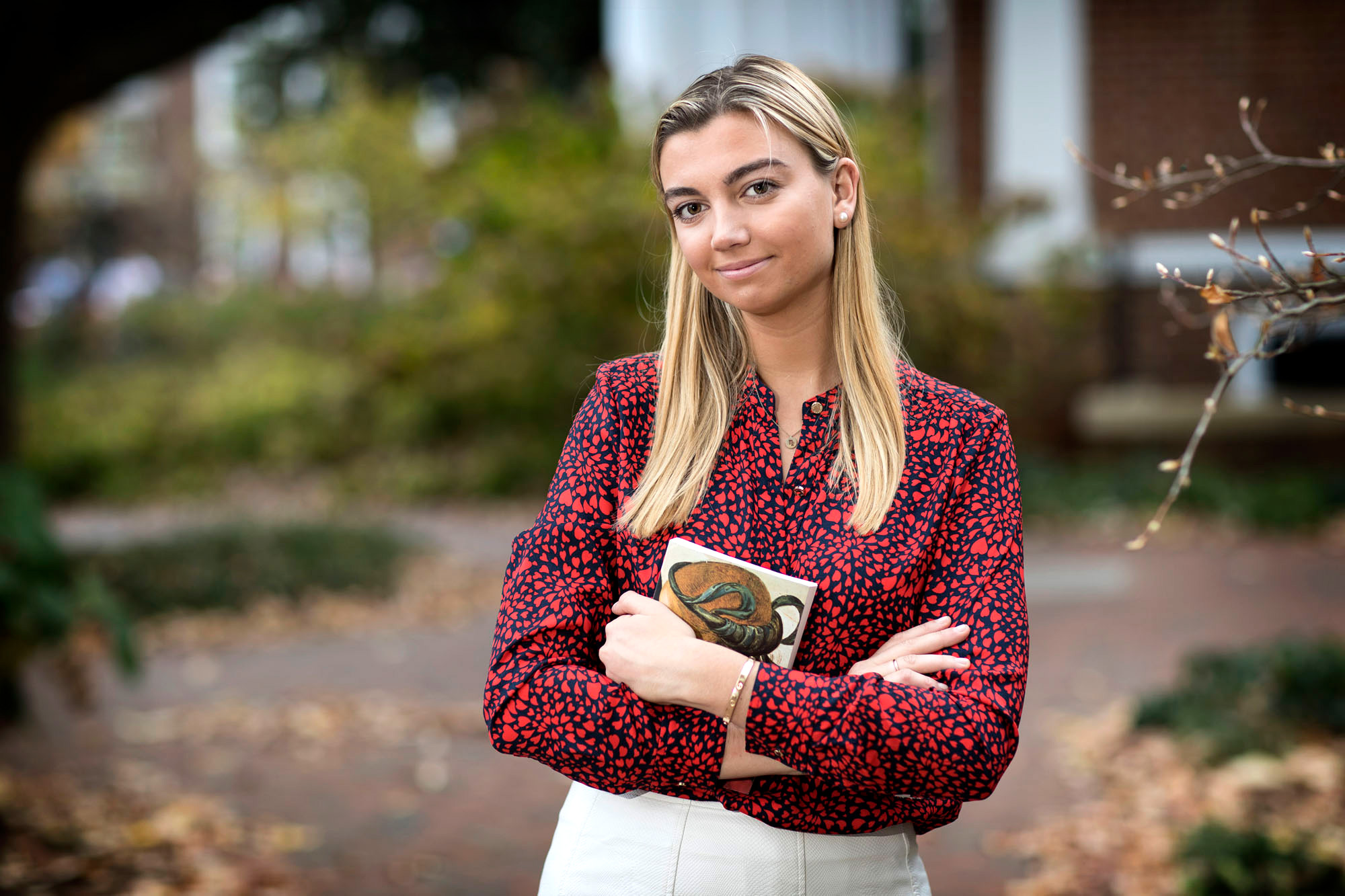 Marcella Sohm said Faulkner wrote about father-son relationships in his fiction, but almost nothing about fathers and daughters.

The project yielded many exciting moments for Sohm, who began studying the Nobel Prize-winning author’s difficult modernist work while she was in high school. The paper she wrote at UVA netted her second place in a contest, with a trip to Cape Girardeau, Missouri, as part of the prize to present the paper at the Center for Faulkner Studies’ conference, one of only two undergraduates invited.

“Seeing Faulkner’s letters firsthand was amazing. The UVA Special Collections Library gives students such a unique opportunity. To touch and see the letters of a famous author whenever I wanted was a special experience,” she said. “[English Professor Stephen] Railton’s class was the third class I’d taken on the author and I was excited by the prospect of looking at something totally new to me.”

Railton said the scholarly rigor of Sohm’s work in Special Collections is rare for an undergraduate. “Just learning how to interpret Faulkner’s handwriting is an accomplishment worth recognizing, but she also prepared transcripts of many letters from Faulkner to his daughter,” he said.

“Organizing the many letters into some kind of narrative, figuring out what the meaning of that story might be – not just biographically, but in terms of the various father-daughter relationships we came across in his fictions – in all of this, her work taught me a lot,” said Railton, who created “Faulkner at Virginia: An Audio Archive,” from the author’s lectures and readings during his residencies on Grounds.

A towering figure in 20th-century American literature who created a detailed world of Southern culture in his imaginary Yoknapatawpha County, Mississippi, Faulkner, on a personal level displays in his letters the portrait of a father who is self-absorbed and conflicted about his behavior toward his only daughter, Sohm said.

Railton took his students for a special library tour of Faulkner memorabilia with curator Molly Schwartzburg, who showed the students “all kinds of things from the archives: manuscripts, letters, photographs, even Faulkner’s coat and pipe,” Sohm said. “I feel that one of the most rewarding aspects of my project was being able to look at Faulkner as a real person, as opposed to an artist in the abstract, and looking at these items only reinforced that.”

Sohm submitted her resulting paper, “‘She Was My Heart’s Darling’: Faulkner as Father, Through Letters to his Daughter Jill at College,” to the Center for Faulkner Studies’ biannual conference at Southeast Missouri State University, where the center is located.

“The UVA Special Collections Library gives students such a unique opportunity. To touch and see the letters of a famous author whenever I wanted was a special experience.” – Student Marcella Sohm

“Both handwritten and typed, in both what they contain and what they lack, these letters tell the competing stories of Faulkner simultaneously living as a father and an artist,” Sohm wrote.

Faulkner is more likely to mention what he’s working on, whether a Hollywood screenplay or a novel, than to ask Jill about her studies. He tells her about the television biography being made about him when the crew films at their home. He also goes to great length describing the horse he is training. He does, however, give her advice from time to time.

Writing on Sept. 4, 1951, from Rowan Oak, the family home Faulkner bought in Oxford, Mississippi, he said:

“But always remember, Pappy will never let you go without things you want. I only want you to learn about money: that, to have something you want, you have to pay for it by not having something else. That is important for a young woman to learn too who will someday have a home of her own and the responsabilities [sic] of money.”

Faulkner’s binge drinking and the havoc that created in his family also come through in his letters, Sohm points out, including the following excerpt from Sept. 20, 1952:

“Mama told me about my dreadful behavior. That is the sort of thing you can never recall, but you can express you [sic] regret and remorse for it, which I am trying to do. I love you. I believed that I would never hurt you. I wish I could recall it, which I cannot of course. But believe Pappy when he says he loves you and regrets having ever hurt at all his child, his only child, that he has always been and will always be so proud of. I’m still shaky and cant write well, but well enough to say I love you and would give anything to recall that unhappy time.”

“Saving this relationship is so critical to Faulkner because it defines him as a father,” she wrote in her essay. “He refers to himself in the third person as ‘Pappy’ as if trying to conjure the character of the doting father that he could not be for Jill while he was drunk. Faulkner is striving to be unlike the corrupting parents of his novels, and his alcoholic binges take him furthest from this endeavor.”

“Much of my time analyzing Faulkner’s work I found myself wrestling with his portrayals of women,” Sohm said. “Trying to compare what he wrote to Jill with any characters in the books, I realized that there were many instances of father-son relationships, but almost none of fathers and daughters.”

Despite decades of literary study of Faulkner, Railton added there’s not much criticism looking closely at the writer’s role as the father of a daughter.

“Faulkner is such a perfect occasion for UVA students and serious academic research to get together,” he said. “There is still an awful lot to be learned from the materials in the Faulkner Collection here.”