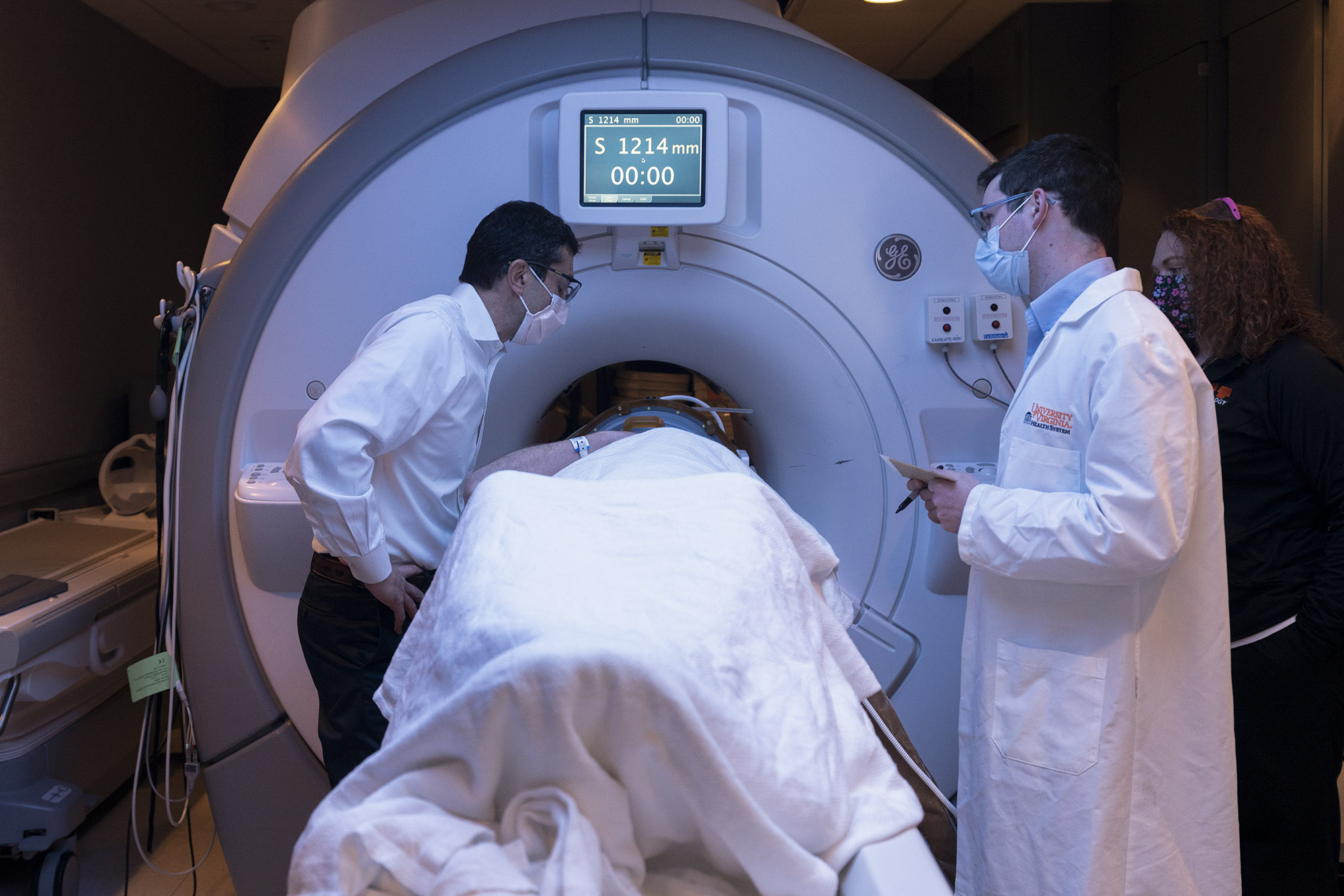 UVA is one of only 37 medical centers in the country with the capacity to offer an incisionless form of brain surgery to treat advanced Parkinson’s disease. (Photos by Sanjay Suchak, University Communications)

The U.S. Food and Drug Administration has approved an incisionless form of brain surgery to treat advanced Parkinson’s disease after successful testing at the University of Virginia School of Medicine and other sites.

The authorization allows the use of Insightec’s Exablate Neuro focused ultrasound device to treat problems with mobility, rigidity and involuntary movements, known as “dyskinesias,” that are common in Parkinson’s. UVA is one of only 37 medical centers in the country with the capacity to offer this minimally invasive treatment, according to the Charlottesville-based Focused Ultrasound Foundation, a longtime supporter of UVA’s pioneering research into the many potential applications of the technology.

Prior to the approval, available treatments for the Parkinson’s symptoms included drugs, which not all patients respond to, and invasive deep-brain surgeries. 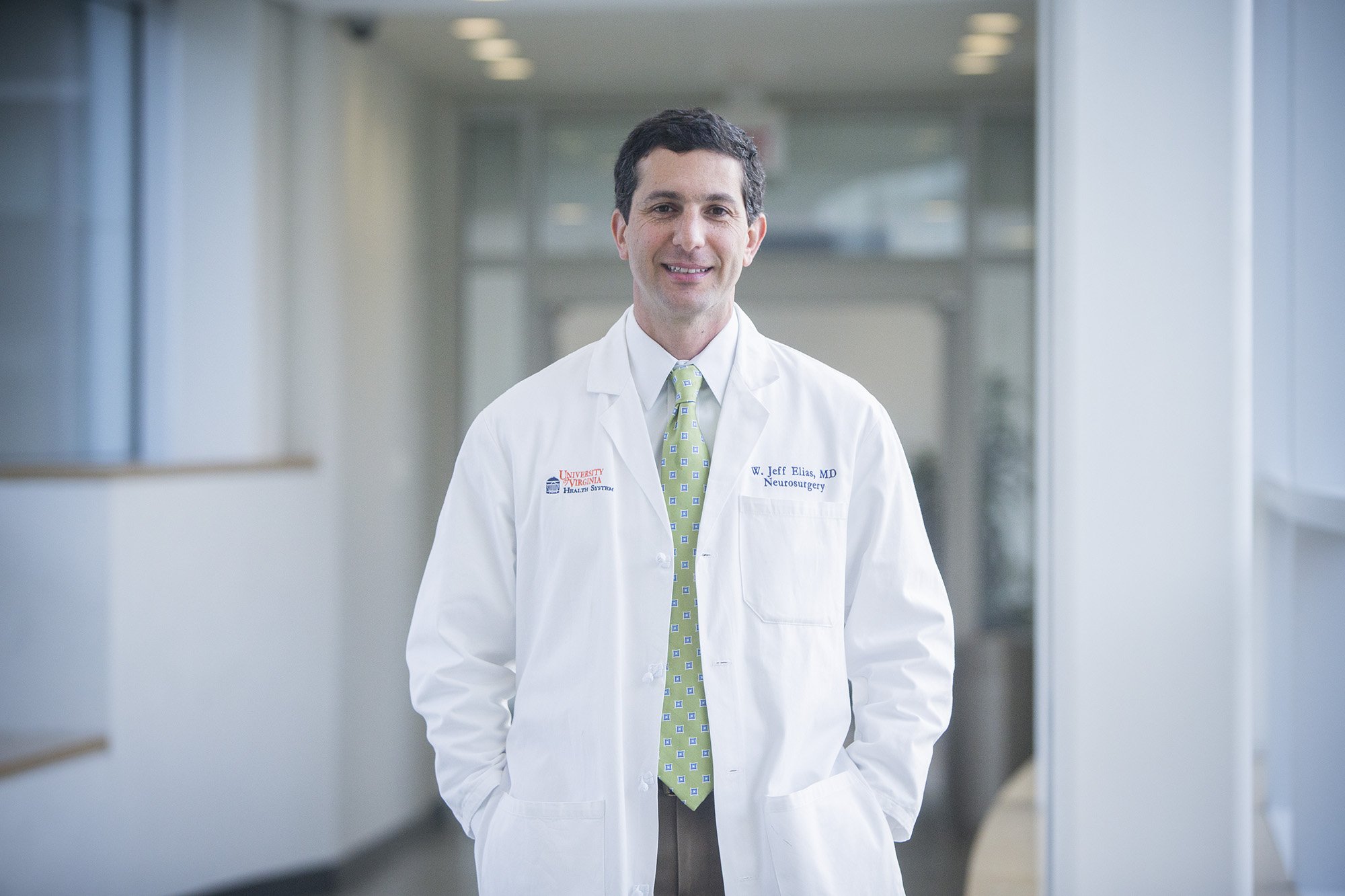 Dr. Jeff Elias is a pioneer in the field of focused ultrasound who led UVA’s testing of the technology for treating Parkinson’s.

Focused ultrasound, in comparison, does not require incisions or cutting into the skull. Instead, the technology focuses sound waves inside the brain to interrupt faulty brain circuits, much like a magnifying glass can focus light to create heat. During the focused ultrasound procedure, doctors use magnetic-resonance imaging to peer inside the brain in real time before making any permanent changes, helping ensure patients get the best possible outcomes.

“This FDA approval of focused ultrasound pallidotomy allows for more treatment options if medications become ineffective or cause disabling side effects,” said UVA Health neurosurgeon Dr. Jeff Elias, a pioneer in the field of focused ultrasound who led UVA’s testing of the technology for treating Parkinson’s. “While this procedure does not provide a cure for Parkinson’s disease, there is now a less-invasive option for patients suffering with medication-induced dyskinesia or severe motor deficits.”

The Power of Focused Ultrasound

It was a decade ago that Elias treated his first clinical trial volunteer with essential tremor, a common movement disorder, using the focused ultrasound technology. Since then, Elias and his neurology collaborator, Dr. Binit Shah, have been leaders in developing MRI-guided focused ultrasound as a commercially approved procedure. UVA’s work, for example, paved the way for the FDA to approve the technology to treat essential tremor in 2018, and the agency has now expanded that approval to include other common Parkinson’s symptoms, including rigidity and involuntary movements, for appropriate patients.

Dr. Neal F. Kassell, chairman of the Focused Ultrasound Foundation, hailed the FDA’s latest approval. “The foundation has long considered the brain to be a vanguard target for focused ultrasound, and this ruling by the FDA is a huge win for both providers and patients,” said Kassell, a former UVA neurosurgeon.

Elias, too, is excited about what the approval could mean for Parkinson’s patients. “This ultrasound technology is obviously very popular with patients because it can be performed on an outpatient basis and without any incision,” he said. “It is still very early stage for a new procedure, so experience and technological advances will increase the safety and effectiveness.”

Next Steps Into the Future of Medicine

Because the approach is newly approved, insurance plans are not likely to cover it immediately. But patients interested in learning more can go online for additional information on UVA Health’s cutting-edge focused ultrasound research.

Elias’ colleagues are investigating the technology’s potential to benefit a huge array of conditions, from breast cancer to epilepsy to opening the brain’s natural protective barrier to admit treatments never before possible. This ability to briefly penetrate the “blood-brain barrier” could open the door for more effective treatments for conditions such as glioblastoma, a deadly form of brain tumor. A glioblastoma trial, led by neurosurgeon Dr. Jason Sheehan, is now underway at UVA.