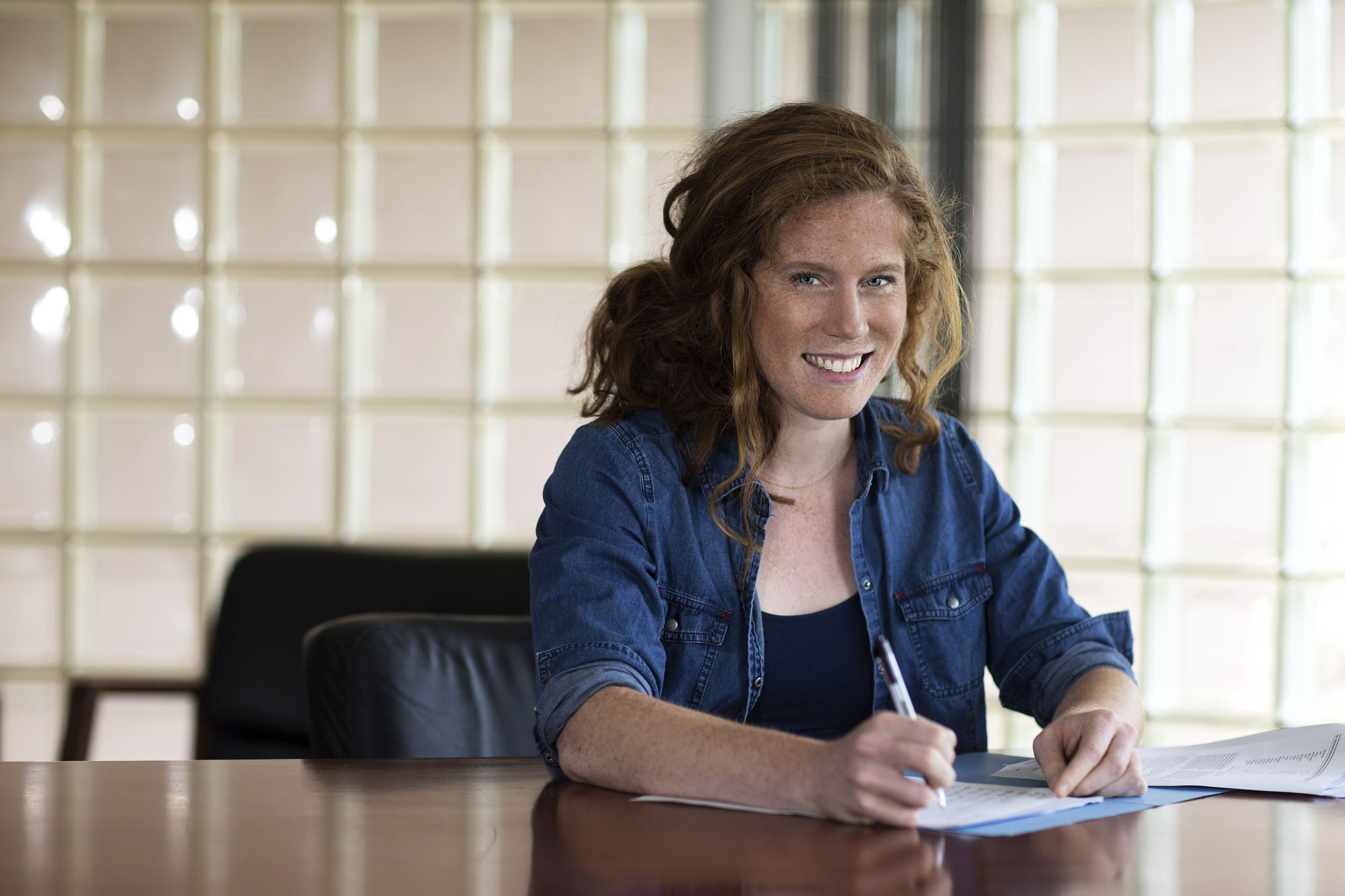 Annie Rorem would be the first to tell you that in her personal life, she is a “capital-F feminist.” Although she’s inclined to take a more measured tone in the professional arena, her work as a mathematician has nonetheless become a crucial tool in understanding the social equality issues she takes on.

As research and policy analyst for the University of Virginia’s Weldon Cooper Center for Public Service and an alumna of the Frank Batten School of Leadership and Public Policy, many of Rorem’s research interests focus on what she calls “the other half,” which has multiple meanings.

Rorem wants more people to see all the hidden truths that math reveals about everyday life and how female mathematicians are contributing to that understanding. She gives regular voice to these topics on her “The Other Half” podcast, which she co-hosts with with fellow mathematician Anna Haensch of Duquesne University.

Recently, Rorem’s personal research has turned toward hidden numbers behind the gender wage gap, and she is explaining her findings in a series of posts for the Cooper Center’s statistics blog, StatChat.

She believes that it’s not enough just to show the average cents on the dollar that women earn compared to men. To make a solid, feasible argument for change, supporters of equality must identify the trends and causal factors behind those numbers, she said.

“Part of me wants to climb up on the roof and shout, ‘Of course there’s a differential treatment in the labor force between men and women!’” Rorem said. “But instead of doing that, I recognize that the best way to show that disparity is with serious, non-partisan, unbiased research and hard data that makes my case.”

Her first of three posts – she warns readers to consume it responsibly – shows how the observed wage gap shrinks, but does not disappear, when certain mitigating factors are removed. Rorem is quick to clarify that this is not because problems of gender equality in wages are being overstated. It’s because data about the differentiation isn’t being analyzed properly.

She believes that in order to better address the wage gap, people need to have a clear understanding of how the numbers are calculated.

“It’s really important to me that when we talk about such a touchy subject, that we don’t conflate causation and correlation and don’t just say, ‘Well women earn less than men so employers must be paying them less because they don’t value them as highly,’” Rorem said. “That argument is going to get nobody anywhere fast.”

Instead, Rorem takes a closer look at the U.S. census data for employed women and men using a statistician’s eye. She calculates more accurate wage comparisons and mean distributions by controlling for outside factors that contribute to salary, like part-time versus full-time status; workers’ age, education and experience; and the industry they work in.

“Controlling for those factors and still seeing this wage gap on the other end – which has been demonstrated to still be there, although not in as dramatic a way – that’s not quite enough,” she said. “You also have to look at the relative importance of each of those factors.”

By examining the influence of factors besides gender that may affect a woman’s earning power, researchers are able to identify other causal problems that may need to be addressed.

For example, “If controlling for factors like time away from the labor force, part-time labor, or number of children makes the wage gap shrink, then I think we need to look at family leave policies,” Rorem said.

These factors are important to note because they suggest that some wage gap differences can be linked to causal problems that are more likely to affect women, but are not necessarily gender-specific. For example, taking time off from the workforce to raise children may equally impact the earning power of men who do it; they are just less likely to make that choice than women.

So in cases where factors like time off or part-time hours affect pay, lower salaries may be the result of a female employee’s choices rather than direct wage discrimination by an employer. For Rorem, this is a key point in the data, because it opens up more avenues for increasing women’s earning power.

“A lot of the holes in public policy right now can be found in the inability to find where good data might be, collect it appropriately and analyze it well,” she said.

Having a mathematician like Rorem break down the data could lead to policy changes that not only address direct discrimination, but also the common outside factors that keep women’s average salaries down.

In her next blog post, set for early July, Rorem will take on the human capital model and how it affects wage differentiation. She’ll discuss what factors garner the highest investment from employers and how to determine whether gender plays a role in these areas.

“Women are not less skilled. That’s not at all the issue,” Rorem said. “It’s that there’s a difference in the way we reward skills and that can have something to do with salary differences. We also need to think about why there are spikes of women in certain professions and what is drawing them there.”

By taking a closer look at the distribution of high-value skills and common trends among female-heavy professions, Rorem hopes to highlight new opportunities to reduce the wage gap.

She wants lawmakers to see that there’s more to reducing the wage gap than just enforcing anti-discrimination laws, although that is important. It’s also about identifying causal factors that are preventing women from making more money.

Access to affordable child care and flexible schedules are frequent buzzwords, but recognizing under-valued skills required for professions with a high proportion of female workers, such as teaching and nursing, could lead to further change. Cost-benefit analyses of increasing pay standards on these undervalued skills would show which ones offer the most return on the overall cost of increased wages.

“In my job, journalists ask me all the time for statistics on the wage gap, but just looking at the raw data isn’t enough. We need to dig deeper,” Rorem said. “There absolutely is a problem with differential experiences in the labor force and we need a solid understanding of the data if we’re going to build a strong argument for change.”

Monkeypox Is Spreading, But University’s Risk Believed To Be Low END_OF_DOCUMENT_TOKEN_TO_BE_REPLACED

This Alum Is Living His Best Life on the Road, One State at a Time END_OF_DOCUMENT_TOKEN_TO_BE_REPLACED

These Giant Wind Turbines, Inspired by Palm Trees, May Be the Future of Renewable Energy END_OF_DOCUMENT_TOKEN_TO_BE_REPLACED