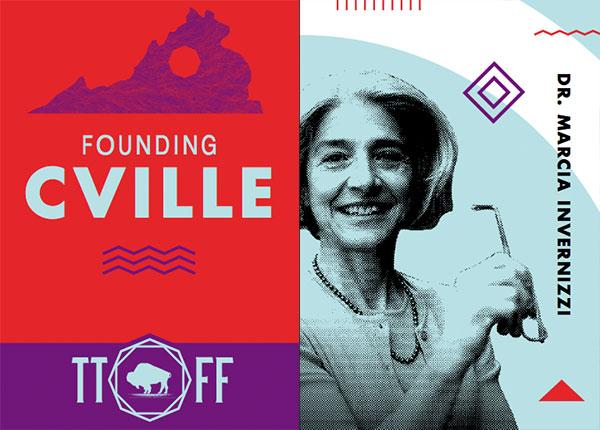 If you’ve been to the Downtown Mall lately, you may have noticed some new faces – on dozens of banners hanging from lampposts. These Tom Tom Founders Festival posters feature 18 local “founders” – Charlottesville innovators who have transformed their community and impacted the world through original research, business and service initiatives.

One of these “Thomas Jeffersons of today” created the world’s first at-home fertility test for men. Another invented a new approach to culturing human cells that may one day be the foundation for growing replacement human body parts.

These 18 founders – 12 of whom are University of Virginia faculty and/or alumni – will be recognized Friday evening at 6:30 with “Founding C’ville” awards, as the centerpiece of this year’s Tom Tom Founders Festival Fall Block Party at the McGuffey Art Center, located at 201 Second St. NW, just off the Downtown Mall.

“Founding C’ville talks about the Thomas Jeffersons of today,” festival director Paul Beyer said. “The act of founding transcends just having a good idea, because to realize that idea takes perseverance and teamwork. In that sense, Jefferson’s legacy as a revolutionary leader is more relevant than ever. The founders celebrated in this project show how Charlottesville’s extraordinary history sets the stage for an exceptional future.”

The Fall Festival is co-sponsored by several U.Va. divisions: U.Va. Arts; the i.Lab; the Batten Institute at the Darden School of Business; the Galant Center for Entrepreneurship at the McIntire School of Commerce; and the School of Engineering and Applied Science.

The Tom Tom Founders Festival has also partnered with the Entrepreneurship Group at U.Va., and HackCville to host students from six colleges across Virginia for a “Startup Trip” to tour five thriving local startup companies.

• WillowTree Apps, a strategy, design and development company focused on mobile Web design, named to the INC 500 list of the fastest-growing 500 companies in the country;
• Borrowed and Blue, a national wedding planning website;
• Vibethink, a local technology­driven creative agency;
• Apex Clean Energy, developer of billions of dollars of renewable energy projects across the U.S.;
• and Mudhouse Coffee, which started as a coffee cart and is now listed as one of the Top 10 coffee shops in the U.S., according to USA Today.

Following the tours, the students will attend the Tom Tom block party and participate in a mixer with staff from more than 30 local technology firms.

“This trip is an opportunity to showcase Charlottesville’s thriving tech and innovation scene and to bring young and bright talent to Charlottesville,” said U.Va. third-year student Daniel Willson, the innovation programming coordinator for Tom Tom and one of the student leaders at HackCville, a “clubhouse and community for student entrepreneurship education” at U.Va., run jointly by students and alumni.

“It’s also an opportunity for student leaders to share best practices and collaborate in developing business, tech and entrepreneurship programs at their own universities.”

Willson, a computer science major in the College of Arts & Sciences, said he wants to start his own venture someday, probably in education technology.

The Tom Tom Founders Festival website includes an engaging profile of each “founder” to be recognized Friday, including seven U.Va. faculty members:

Calhoun, Invernizzi and Vaughn are all alumni of U.Va. as well as being faculty members.

The Downtown Mall lamppost banners recognizing these “C’ville Founders” will remain on display through the end of September.