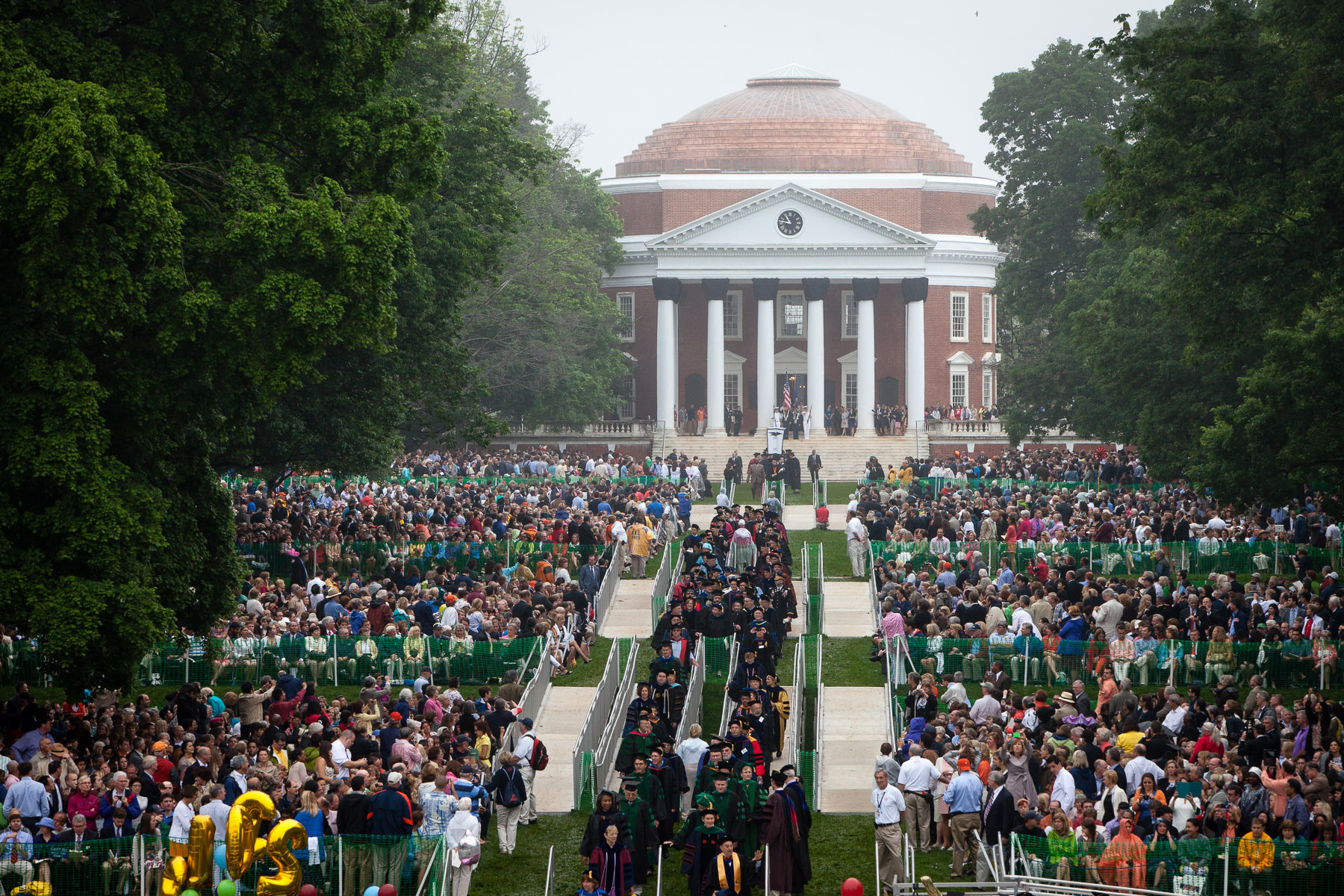 More than 30,000 people shrugged off a persistent mist Sunday, packing the University of Virginia’s historic Lawn to affirm the value of traditional higher education and commemorate the Class of 2013.

The University’s 184th Final Exercises offered all of the familiar elements: graduates in gowns and mortarboards, “Pomp and Circumstance,” floating flocks of colorful balloons, throngs of camera-toting relatives and inspiring words from a distinguished speaker.

But there was another, underlying message on Sunday: That the 6,363 degrees conferred represented a unique achievement worth honoring and celebrating in a way much more substantial and festive than downloading a certificate, snapping closed a laptop and trundling off to bed.

If online education is the wave of the future, Sunday’s events seemed to say that people still attach huge significance to completing four years (or perhaps fewer, as 82 students were honored for finishing in three years or less) at a bricks-and-white-columns university.

U.Va. President Teresa A. Sullivan affirmed as much when she announced during the ceremony that the University had surpassed the $3 billion goal of its capital campaign. “All of us who care about the University and its future are incredibly grateful,” she said.

Sullivan often says that residential education is as much about what happens outside the classroom as inside. She highlighted that notion in her closing remarks to graduates, expressing the hope that they will take with them an ingrained sense of honor, ethics, public service and the value of diversity – “values that have distinguished you as students here.”

Befitting an occasion that marks the maturation of a new generation of citizens, the ceremony’s featured speaker, former U.S. Sen. James Webb, D-Va., a veteran of the Vietnam War and longtime public servant, touched on rite-of-passage themes in his remarks.

After describing the tumult of his generation’s era – he graduated from the U.S. Naval Academy in 1968, a time when “this country was on fire, in some cases literally” –– he described the challenges facing the Class of 2013.

He described the “American trifecta” of “unending opportunity at the top if you put things together and make it; fairness along the way; and a safety net underneath you if you fall on hard times, or suffer disability or reach your retirement years.”

In the recovery from the most recent recession, he said, those at the top have thrived, with the stock market more than doubling since March 2009. At the bottom, the safety net is strong, he said.

“Our challenge, which may be the greatest challenge of your generation, is to bring a full measure of economic fairness and social justice back to those who are in the middle,” Webb said, drawing applause from the families’ seating areas. “Our working people and our small business owners are the ones who always carry the American dream on their backs. They want a shot, not just at the top, but simply to have a life of financial independence and predictability. Their place in our society has been severely damaged over the past several years.”

U.Va. graduates are well-positioned to address those challenges, he said. “It’s not an exaggeration to say that, by graduating from this historically revered institution, each one of you has already passed through a gateway that allows immediate entry into the best that America has to offer. … The truth is that in America, the mere act of graduating from this institution has put all of you on a fast track.”

While several students in the crowd opined that the ceremony was mostly for the benefit of their families, they also acknowledged that it bore more significance than just a photo op for Mom and Dad and Aunt Sue from Kansas.

“It’s the culmination for four years of hard work,” said Catherine Watts of Yorktown, who was taking her degrees in foreign affairs and Chinese from the College of Arts & Sciences. “They should definitely have a big hoorah. … It’s just a huge honor to say that I’ve finally graduated.”

Sarah Seid, a psychology and religious studies major from Clifton, said she was in the “it’s for families” camp, but admitted, “I groan about it, but it is important.”

In wrapping up his remarks, Webb told a story that underscored the importance of the occasion.

His father, he said, was the first Webb known to have finished high school. Afterward, he spent 26 years taking night school classes, a college career interrupted by his service in World War II. Finally, during the younger Webb’s senior year of high school, his father accumulated enough credits to graduate from the University of Omaha.

Describing his father as being more than a little like the defiantly proud main character in the Pat Conroy novel “The Great Santini,” Webb recalled what happened after he received his diploma.

“He broke out of line and walked directly toward me,” he said. “He stuck the diploma in my face and he said, ‘You can do anything you want in this country, and don’t you ever forget it.’

As applause began to swell, Webb continued. “That’s why people from across the world hope and dream that they might someday come here. Here’s the American way: If you want it, go get it. Work hard, play hard, and whatever you do with your lives, never lose sight of the fact that you have been blessed to be able to live and work and be a part of this historically unique country called the United States of America.”

What Is the ‘4th Side’? END_OF_DOCUMENT_TOKEN_TO_BE_REPLACED