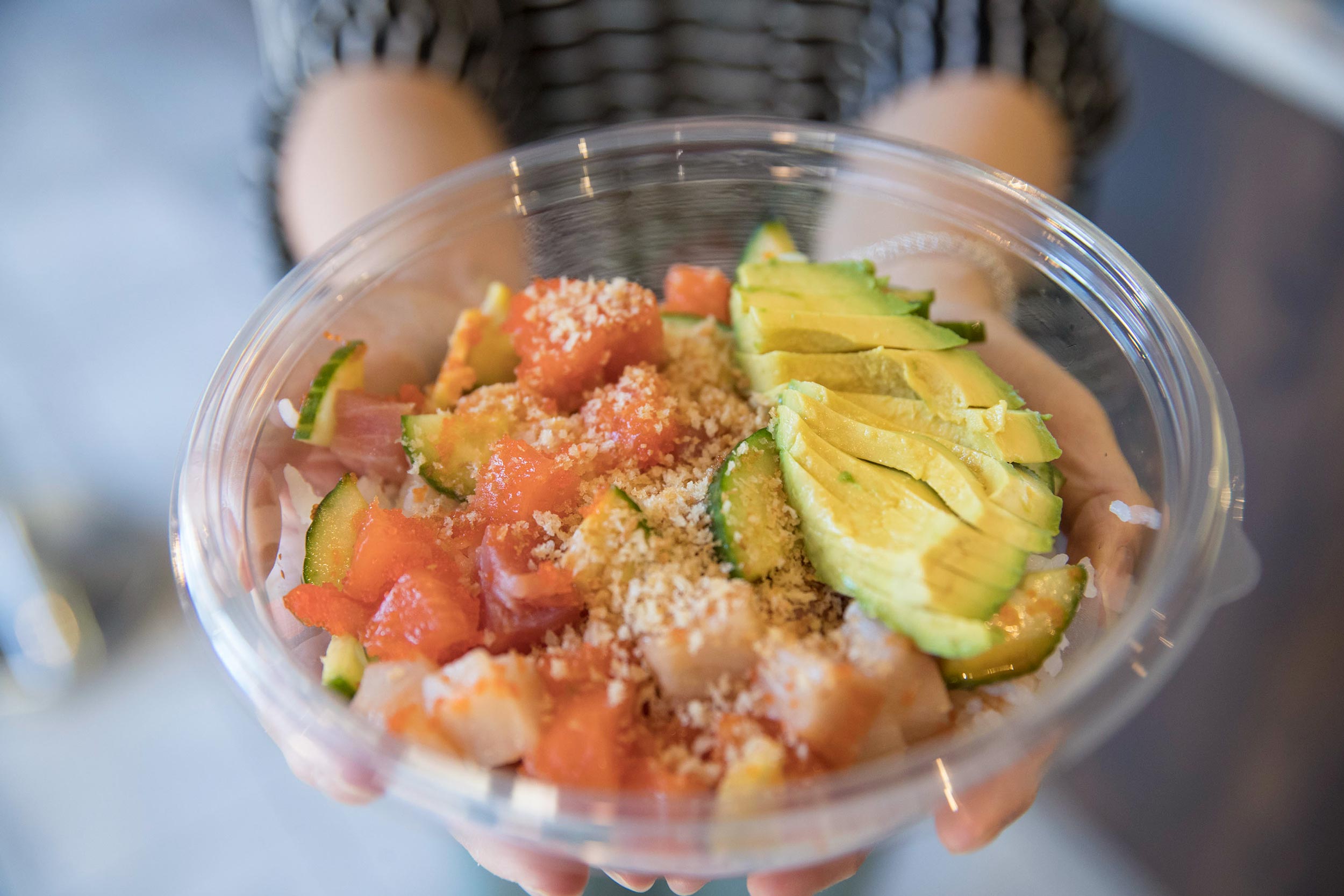 The reason she looks back so fondly on those activities is because she did them with her mother, Nu Ly.

“She always loved to cook,” Huynh said, “and really enjoyed it when other people enjoyed her food.”

Huynh’s mother had learned from her own mother in Vietnam. One of Huynh’s mother’s dreams had been for her daughter to open her own restaurant.

Today, she would be beaming with pride.

Hyunh, a 2004 alumna of the University of Virginia’s McIntire School of Commerce, and her husband Bo Zhu have owned and operated a number of successful restaurants over the last decade. They include East Garden, a Chinese buffet in the Pantops area; and Got Dumplings, which began as a food truck and now has a bricks-and-mortar location on the Corner.

The couple’s latest endeavor is Poke Sushi Bowl, a restaurant offering Hawaiian-inspired cuisine that already has six locations throughout the state, including two in Charlottesville – one on the Corner, and another in the Barracks Road Shopping Center.

Huynh’s grandparents on both sides lived in China before the Communist regime led them to immigrate to Vietnam.

After the Vietnam War, Huynh’s parents moved the family to the United States, settling briefly in Charlottesville with another family member who had immigrated here, before deciding to move to Santa Barbara, California.

There, Huynh’s dad worked odd jobs, while her mother sewed dresses at a textile factory. Huynh said the family lived in a tiny one-room abode, in which they had to rent out a bed to a non-family member in order to make ends meet.

During Huynh’s freshman year of high school, the family decided to move back to Charlottesville.

The family briefly owned a Vietnamese restaurant called Crystals (the space now occupied by Indian restaurant Milan) before having to sell it when Huynh’s mom was diagnosed with  cancer.

“She never smoked,” Huynh said, “so we believed it was related to working in textiles because when we were in California and my mom would blow her nose, [the mucus] would always be the color of whatever clothes she was sewing.” 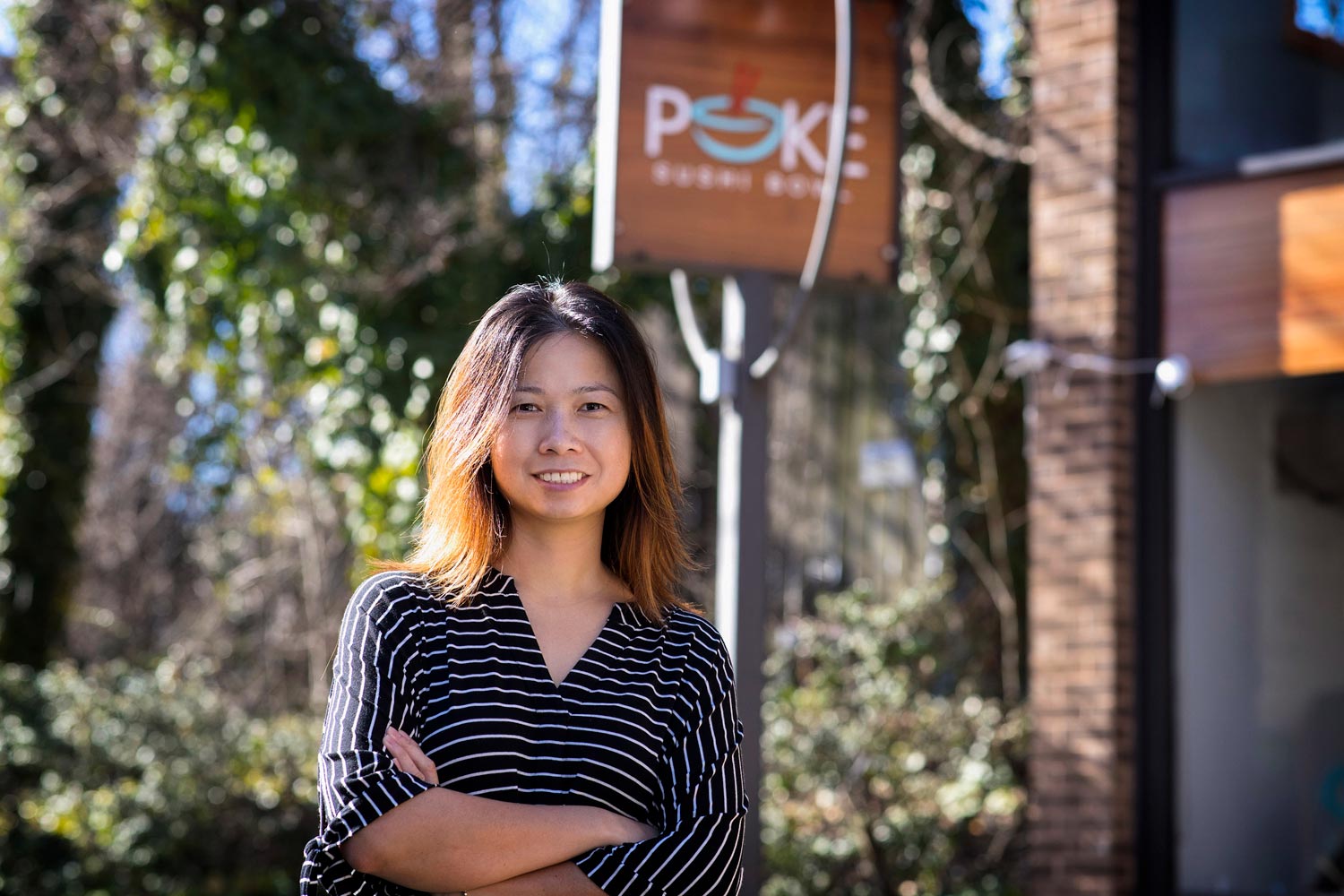 While an Albemarle High School student, Huynh began working at a Chinese restaurant to save money for college. There, she continued learning about the restaurant business – and met Bo.

Subsequently, Huynh earned admission to UVA, becoming the first member of her family to attend college.

Taking an economics class during her first year at the University made Huynh realize that she loved working with money and numbers, and she successfully applied to transfer into McIntire.

Huynh said she loved the intimate nature of the Commerce School classes.

“I learned teamwork and to be able to have trust and delegate work. I learned you can’t do everything yourself and you need a lot of communication, organization and planning to be successful. It was a great experience.”

After varying degrees of success opening Chinese restaurants in Michigan and New Mexico, Huynh and Zhu returned to Charlottesville and opened East Garden in 2006. “There were lines out the door during lunch,” Huynh said. “It was always busy. It felt great because we really put our heart into making sure things went right.”

Eventually, though, Huynh and Zhu – longing for a simpler, less labor-intensive operation – sold the restaurant.

In 2011, they came up with the idea for Got Dumplings when Aramark, UVA’s food service provider, was looking for new on-Grounds options for students while the cafeteria in Newcomb Hall underwent renovation.

Huynh’s mother was the inspiration for the menu items, which are made from scratch.

Huynh said the biggest compliment she can receive is when UVA students tell her that her food reminds them of home. On one occasion, she had just closed down the food truck when a student came up to her and gave her a huge hug. “It’s rewarding to know that students can taste the traditional ingredients we use and compare it to home-cooked meals,” she said.

Huynh got the idea to open a Poke restaurant during a 2016 trip to California when she saw how popular the cuisine was. “People really love the trend of eating healthy and eating simple,” she said. “We were like, ‘This would be great for the Charlottesville community.’”

At Poke (pronounced “po-kay” by Hawaiians and “po-key” by most others in the United States), diners – much like they would do at a Chipotle or a Subway – can customize their meal.

Diners choose a “base” – rice, greens or noodles. Next, they add a protein – sushi-grade tuna, yellowtail, shrimp, crabmeat or chicken. Then comes the “mix-ins” – which include things like cucumber, edamame, mango, tofu, seaweed and pineapple. Everything is then topped with a selected sauce, as well as a choice of gluten-free ingredients, such as ginger, sesame seeds and avocado.

“We have customers who come in and say, ‘My doctors prescribed me poke,’” Huynh said. “When you eat raw fish, you don’t have the oils and all that.”

“It’s all a learning process – every step,” Zhu said. “It’s about location, it’s about the market and then it’s about the product. You can’t go wrong with any one step. Unfortunately, that’s the restaurant industry. It’s tough.”

Interestingly, Huynh’s mother never followed any recipes. She created her dishes based on feel. Nevertheless, Huynh said people who have tried both her and her mom’s cooking say they can’t tell the difference.

Aside from cooking, Huynh said her mother had a huge influence on her and her siblings.

“She was just a very hard worker and very giving,” she said. “She made us become who we are.”

One of Huynh’s favorite things is making many of the same dishes for her three kids that her mom made for her.

“Their first question when they get home,” she said, with a laugh, “is ‘what’s for dinner?’”

Class of 2020: Memories and Moments From a Long-Anticipated Celebration END_OF_DOCUMENT_TOKEN_TO_BE_REPLACED