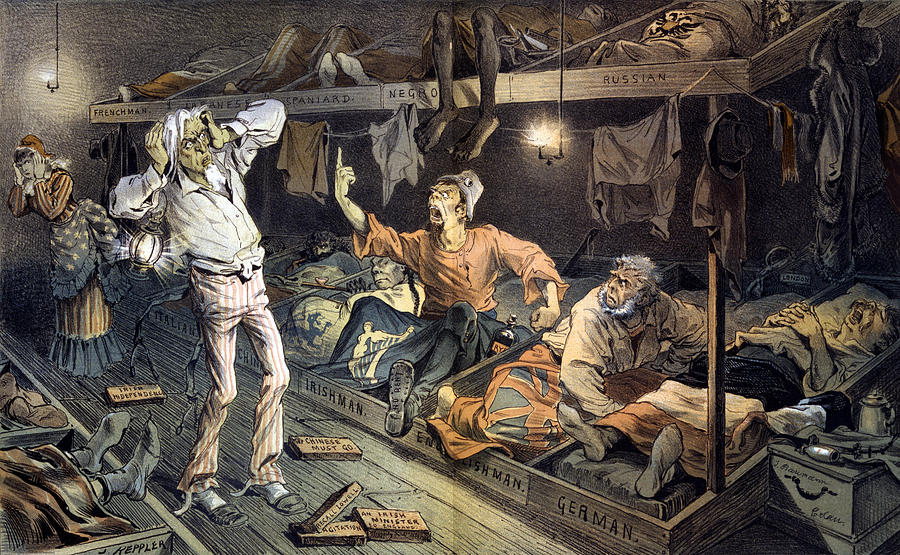 The category of “white” as the majority race against which other groups have been described in the United States might seem well-defined, but it has been anything but that throughout American history.

In the past decade, scholars digging into primary sources have found that at certain times, some ethnic groups that one might think of as being “white” today – including Irish or Scotch-Irish, Italian, Jewish and Polish – were not considered to be white like Anglo-Saxon whites at various times and places. These attitudes led to economic and social conditions often enforced by law.

In her University of Virginia College of Arts & Sciences first-year seminar, or COLA, “Whiteness: A Racial Category,” assistant professor of religious studies Jalane Schmidt aims to show how whiteness, not just blackness, has been a shifting category and has served to exclude or include certain ethnic groups or races over time and in different parts of the country. Legal and social conditions defining who was considered black or white also demonstrate that being white has not been a hard-and-fast identity.

“The price of whiteness is forgetting – suppressing ethnic identity,” Schmidt said in a recent class session. For waves of immigrants who came to America, that meant giving up one’s native language and family history, including the difficulties they and their ancestors faced, in order to be able to enjoy the privileges of being white Americans.

COLA courses are one-credit, graded seminars open to first-year students. Approximately 80 percent of the content is devoted to the course’s topic, with 20 percent allotted for academic advising issues. The instructors serve as advisers for their students until they declare a major.

The COLAs, which are consistently filled to maximum capacity, are part of what makes U.Va.’s first-year experience enriching. “The faculty know the students better, the students know the faculty better and the advising is much more effective,” said Rachel Most, associate dean for undergraduate academic programs.

Among the 60-plus COLAs offered this fall, U.Va. President Teresa A. Sullivan is teaching the Souder Family Seminar on “The 21st-Century Labor Force.” Other classes include “Books as Things,” taught by English professor David Vander Meulen; “Medicine, Life and Chemistry,” taught by Robert Burnett, professor emeritus of chemistry; and “The Idea of the University,” taught by associate professor of German Chad Wellmon.

“In this COLA we explore the different cultures that make up ‘whiteness’ in America today and their histories, including the good, bad and ugly,” said Christina Buckles, one of 16 students in the seminar. “I wanted to take this class because it struck me as bizarre that a course on white people was offered to students, and I was curious to see what would be taught, especially since I am multiracial myself.”

“Whiteness is the elephant in the room that needs to be examined,” Schmidt said. “We’re used to studying racism as the exclusion of ‘others.’ But we’re not used to framing racism as, in part, an anxious effort (legal, social, cultural, etc.) to protect and prop up the perennially unstable racial category known as whiteness.”

Reading assignments and discussions review different theories and situations, beginning in the earliest days of America and proceeding to contemporary times. They cover topics including misguided scientific classifications of race, laws of miscegenation and school desegregation.

The class even watched a clip from an episode of “The Simpsons,” in which the daughter, Lisa, wants to research her family history and finds out that one of her ancestors moved to Canada to marry a former slave.

Irish history serves as a good example of the shifting definitions of whiteness. Irish Protestants made up the first group of emigrants from that country to the new nation of America in the late 18th and early 19th centuries. The stereotype of Irish immigrants as Catholic and poor emerged later in the 19th century after the famine in Ireland drove almost 2 million of them to move to the United States.

“A great number of the concepts that I’ve garnered from this course have led me to reevaluate my existing perceptions of America’s historical narrative on race, such as the narrative of my ancestors, the Irish,” student Sarah Kenney said. “I was shocked to discover that Catholic Celts who arrived in the U.S. post-1840 were treated more like black Americans than white Americans. This ethnic group shared neighborhoods, jobs and close social interactions with the black community, circumstances that created both unity and competition for work and social status between them.

“The Irish community on a whole was viewed as a collection of troublesome and unsophisticated drains on society, a societal reality so different than that which I’ve experienced as a white Irish Catholic in the United States today,” Kenney said.

Instead of fighting injustices under which both groups suffered, the Irish chose to join the privileged category, and this happened with other ethnic groups, too, Schmidt said. Just as children who go to a different school when their families move have to learn what the social scene is like, new immigrants in America had to learn a new set of social codes eventually, she said, giving up Gaelic language and ceasing to mix with black people.

The class is also studying how the definition of “white” changed over time in Virginia. Thomas Jefferson defined “the American” as “Anglo Saxon” and had a low opinion of the Scotch-Irish settlers of Appalachia, whose proximity to Indians, he wrote, had allegedly rendered them “wild,” Schmidt said.

A recent guest speaker to the class, Cinder Stanton, former head historian at Monticello, talked about her research on slavery at Jefferson’s plantation home and on the progeny of Jefferson and the slave Sally Hemings, the topics of her book, “Those Who Labor for My Happiness.” The descendants who defined themselves as black knew about and embraced their heritage. Those who passed as white, however, such as Eston and Julia Hemings, left behind their mixed ancestry and changed their name; their white descendants didn’t know they were related to Jefferson and Hemings until they found out from Stanton during her fieldwork.

The syllabus has also taken them into the 20th century in Virginia.

“The Anglo Saxon Club of America persuaded the Virginia General Assembly [in the 1920s] to protect the ‘gene pool’ by sterilizing ‘degenerate whites,’” Schmidt said. “We examine the 1927 Supreme Court eugenics case of Charlottesville resident Carrie Buck (of ‘the shiftless, ignorant and worthless class of anti-social whites of the South,’ according to Justice Oliver Wendell Holmes), who was sterilized by order of the commonwealth,” she said.

In the mid-20th century, housing segregation became common and deliberately imposed by the Federal Housing Authority’s “redlining” policies. The FHA denied or limited financial services to neighborhoods where they feared property values might decrease if certain, in their words, “inharmonious” racial or ethnic groups moved in, even if the individuals had good credit.

The class is also examining the 1967 U.S. Supreme Court case, Loving v. Virginia, which overturned Virginia’s “Racial Integrity Act,” first passed in 1887, which had prohibited “miscegenation” and limited whites to marrying only other whites.

“Through the lectures and readings, I was exposed to the ambiguities and fickleness of race within America,” another student, Robert Carter, said. “My whiteness wasn’t given to me by my ancestors; it was given to me by the process of rewarding ‘whiteness’ and punishing ‘blackness.’ It is in this point that I realized that my racial identity was mostly circumstantial and that if I wanted to identify myself based on race, ‘white’ would not be sufficient.

“‘Whiteness: A Racial Category’ has encouraged me to seek my ancestral identity outside of my own conception of race.”

Do You Know the History of Your Favorite Corner Spots? END_OF_DOCUMENT_TOKEN_TO_BE_REPLACED

Netflix to Add Ads. Why This Could Be a ‘Game-Changer’ for Your Viewing Experience END_OF_DOCUMENT_TOKEN_TO_BE_REPLACED

What’s Next for UVA’s Class of 2022? END_OF_DOCUMENT_TOKEN_TO_BE_REPLACED