A Fitting Tribute to a Legendary Coach 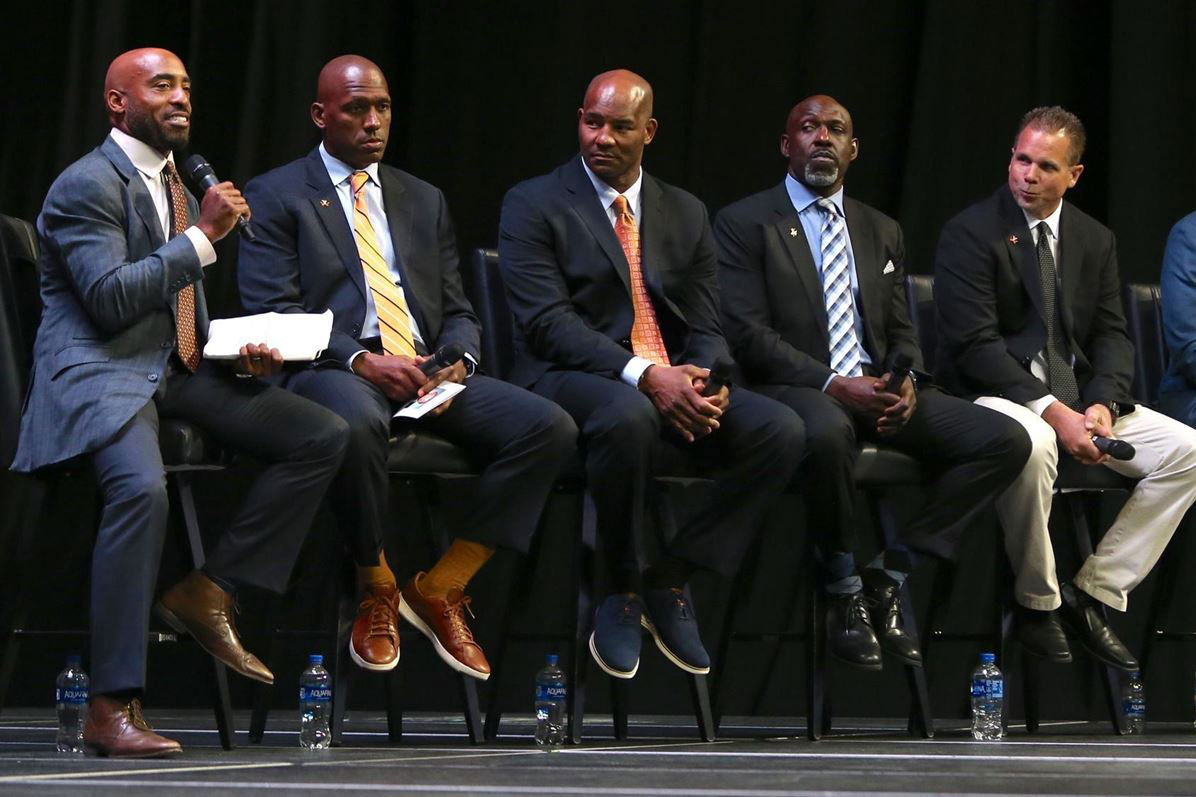 They talked after Mendenhall’s introductory press conference, and a friendship was formed.

Mendenhall, who’s heading into his fourth season as UVA’s head football coach, was back at JPJ on Saturday, this time to help celebrate the life of Welsh, who died Jan. 2 after suffering a stroke. He was 85 years old.

“If you ever hear one of our players say ‘and,’ if you trace where that’s coming from,” Mendenhall told his audience, “it’s coming from George Welsh.” 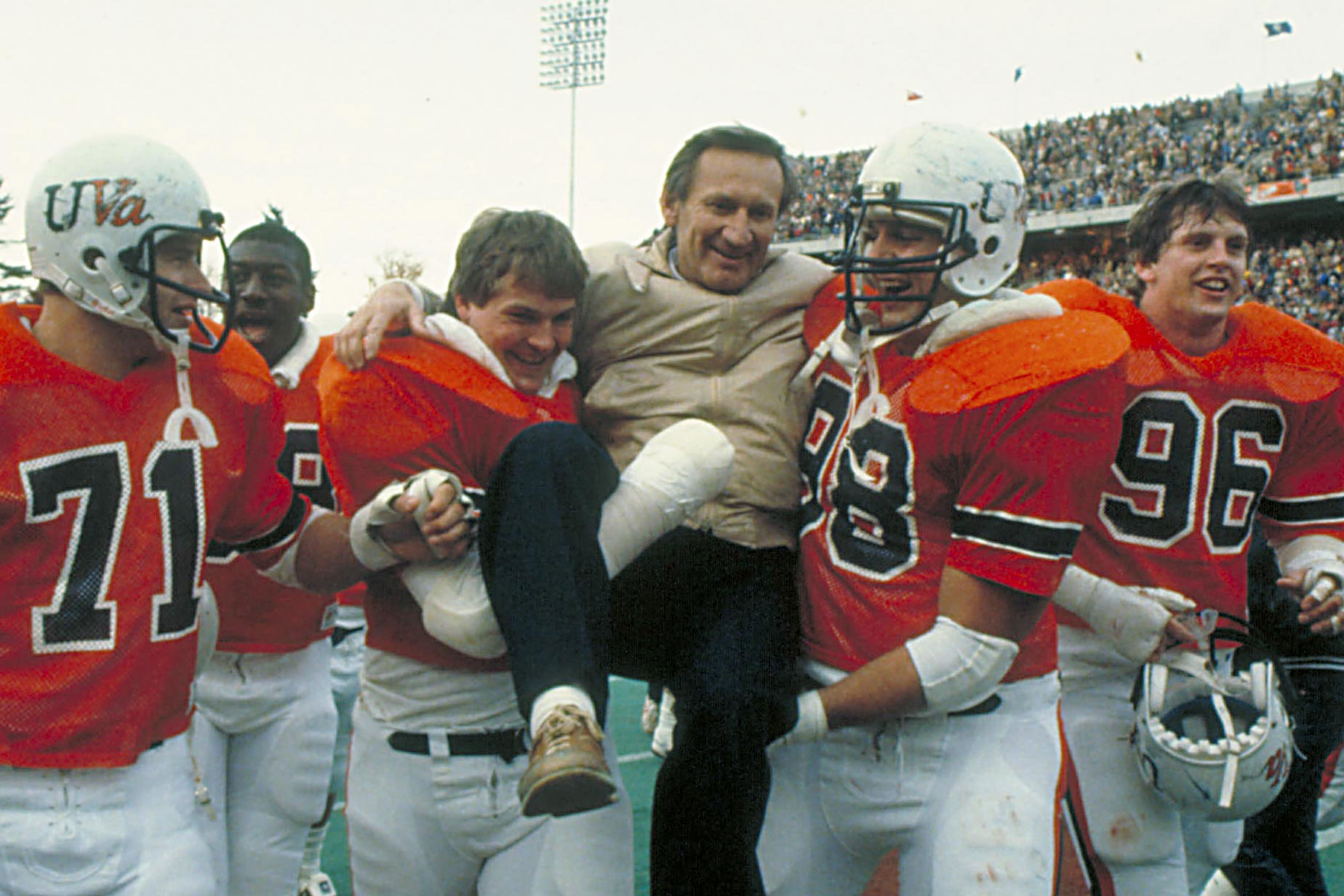 In 19 seasons at Virginia, Welsh posted a 134-86-3 record and proved that an academically prestigious school could also have a football program that won with integrity. He retired after the 2000 season as the winningest coach in ACC history.

“You can do both,” Mendenhall said. “He demonstrated it at Navy, and he demonstrated it here. I would love to consider myself a protégé, but I didn’t work with him. But I’m responsible for that standard, which is daunting, but possible, as he proved. With the right people, you can do it. And that is my hope.”

At the U.S. Naval Academy, from which he graduated in 1956, Welsh starred at quarterback. As a senior, he finished third in voting for the Heisman Trophy.

“It’s worth remembering, George was Roger Staubach before Roger Staubach,” said John Feinstein, the noted author and columnist who served as master of ceremonies Saturday at JPJ. 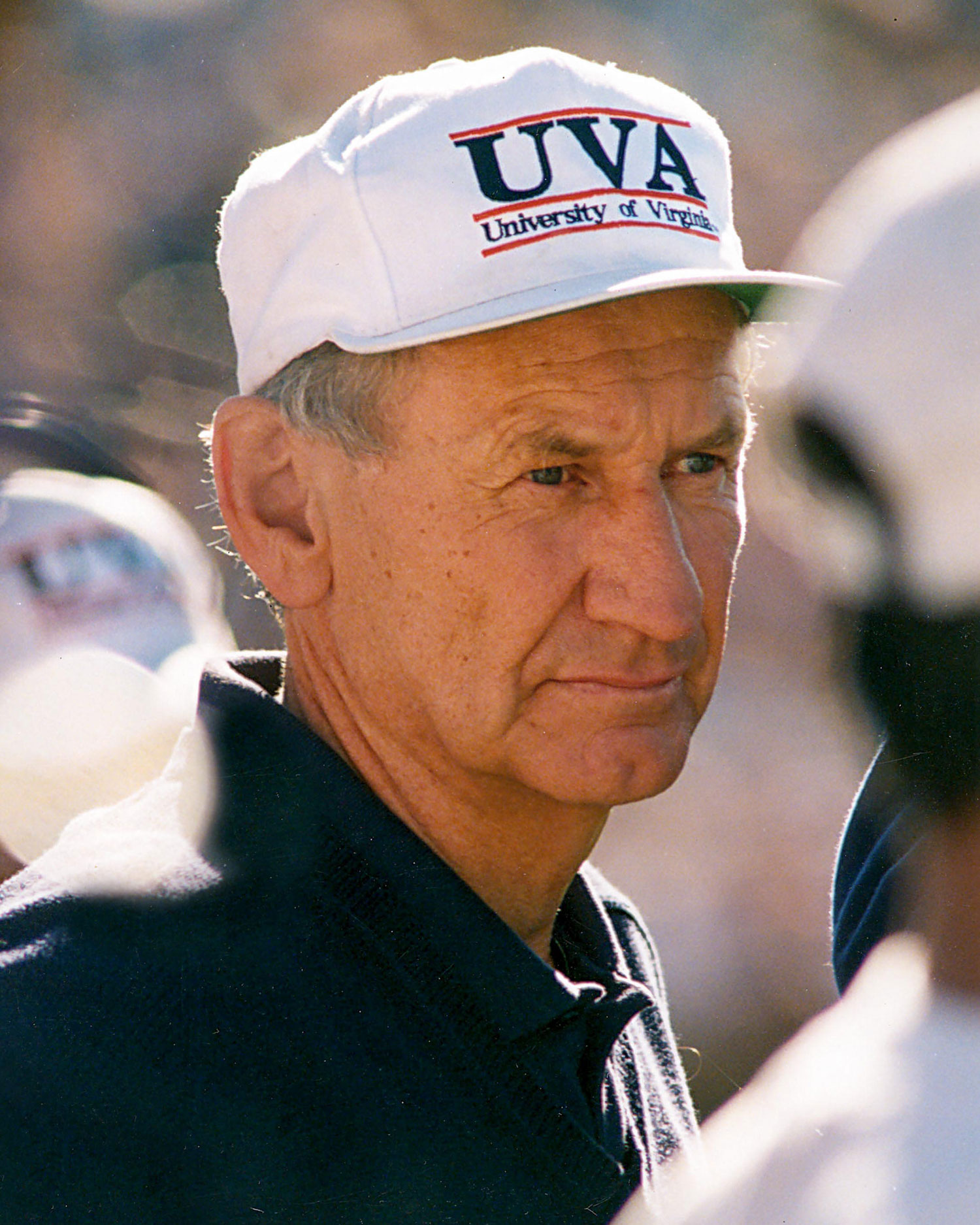 Welsh began his coaching career as an assistant at Pennsylvania State University, first for Rip Engle and then for Joe Paterno. After 10 seasons with the Nittany Lions, Welsh returned to his alma mater as head coach in February 1973. The Midshipmen had finished with a losing record in eight of the previous 10 seasons, but Welsh soon led them back to prominence.

Under Welsh, a native of Coaldale, Pennsylvania, Navy went 55-46-1. In his final three seasons in Annapolis, Maryland, the Midshipmen posted a 31-15-1 record.

He oversaw a similar turnaround at UVA, where he was hired in December 1981. When Welsh arrived in Charlottesville, the Cavaliers had finished with a winning record just twice in the previous 29 seasons.

Virginia was “arguably the toughest job in college football at the time,” Feinstein said.

In 1982, the Wahoos’ first season under Welsh, they finished 2-9, but better days were coming for the program. “We went to work,” said Tom O’Brien, one of the six assistant coaches who followed Welsh from Navy to UVA.

Virginia improved to 6-5 in 1983. In ’84, the Cavaliers advanced to a bowl game for the first time in program history. They finished 8-2-2 that season after beating Purdue in the Peach Bowl.

Starting in 1987, the Hoos finished with at least seven wins in 13 consecutive seasons. During that stretch, they were co-ACC champions twice (1989 and ’95) and made 11 bowl appearances.

Welsh, who was named ACC Coach of the Year four times, was inducted into the College Football Hall of Fame in 2004.

“I think we can all agree that George was the embodiment of a leader,” former UVA cornerback Rondé Barber said Saturday.

Barber was among the scores of former players, from Penn State, Navy and Virginia, who traveled to Charlottesville to pay tribute to Welsh. Many of the men Welsh coached with – and, in Bill Curry’s case, against – were in attendance, too.

“I represent those of us who had that awful duty to look across the field and see that funny hat and those steely eyes,” said Curry, a former head coach at Georgia Tech, one of Virginia’s ACC rivals.

Before he went into coaching, Curry had played in the NFL for Vince Lombardi and Don Shula, among others.

“I thought I knew football,” Curry said. “I knew no football compared to George Welsh, and we learned that in spades when we played Virginia.”

Tata had two stints as a graduate assistant under Welsh, one at Navy and the other at UVA. Three things stood out to him about Welsh, Tata said: the coach’s meticulous attention to detail, brilliant football mind and commanding presence.

Like Welsh, Mendenhall took over a struggling UVA program after enjoying success at another school, in his case Brigham Young University. After finishing 2-10 in its first season under Mendenhall, Virginia improved to 6-7 in 2017 and advanced to a bowl game for the first time in six years.

The Cavaliers finished 8-5 in 2018 after blanking South Carolina 28-0 in the Belk Bowl, just days before Welsh’s death.

“I’m humbled and grateful to be able to represent the current UVA football team to the Welsh family,” Mendenhall said. “All it is is a start, but I feel like I am the steward of his program, and that matters to me. We want more than anything for this program to have the same success [Welsh had].”

Those seated on the stage at JPJ included six of Welsh’s former players from UVA: Barber, Anthony Poindexter, Chris Slade, Nick Merrick, Shawn Moore and Sean Scott. They shared stories that at times elicited laughter from the audience, but their respect and love for Welsh shined through.

“He was a mentor when I needed one," said Barber, who, like his twin, Tiki, another former Cavalier, had a long career in the NFL. “Later in life, he was a friend.”

“Those lessons I learned from Coach Welsh, they made me who I am today,” Scott said.

Slade echoed that comment. By playing for Welsh, he said, “I learned how to be a man.”

Poindexter, a hard-hitting safety who became one of the most beloved players in UVA history, considered leaving for the NFL after his junior year. Had he done so, Welsh would have supported that decision. Poindexter chose to return for his senior season, only to suffer a catastrophic knee injury that prevented him from having a long career in the NFL.

“I think it almost crushed [Welsh], but in my mind it was all good,” said Poindexter, now co-defensive coordinator at Purdue University. “I came back because I wanted to come back. … I probably learned more by getting injured than I would have by going and playing years and years in the league.”

Like Moore, Poindexter later worked as a UVA assistant. That allowed them to see a different side of their former coach, an intimidating presence to his players.

“Some of the best conversations I had with Coach Welsh were after football was over,” Moore said.

The Cavaliers held their annual spring game at Scott Stadium on Saturday afternoon. Afterward, Mendenhall was asked about the tribute to Welsh.

To see how many players and coaches Welsh influenced, and the prominence they’ve attained in the sport, “was really significant to me, and humbling,” Mendenhall said.

The celebration closed with a military tribute to Welsh, whose four children, Kate, Duffy, Matt and Adam, were on the stage. Before the closing ceremony, Adam and Kate spoke.

From her father, Kate said, she gained “self-confidence, self-esteem and a strong belief that I could do anything I wanted, as long as I put my heart and soul into it, I believed in myself, I worked hard, and I never gave up.”

She’s based in New York City, but Kate spent the last 3½ months of her dad’s life with him in Charlottesville. That, she said, “ended up being the best decision of my life.”

Her father, Kate said, will be “forever a Wahoo, forever loved and forever missed.”

Curry said: “God bless George Welsh. We love you, George. We all became better human beings and competitors because of you, and we will never forget you.”