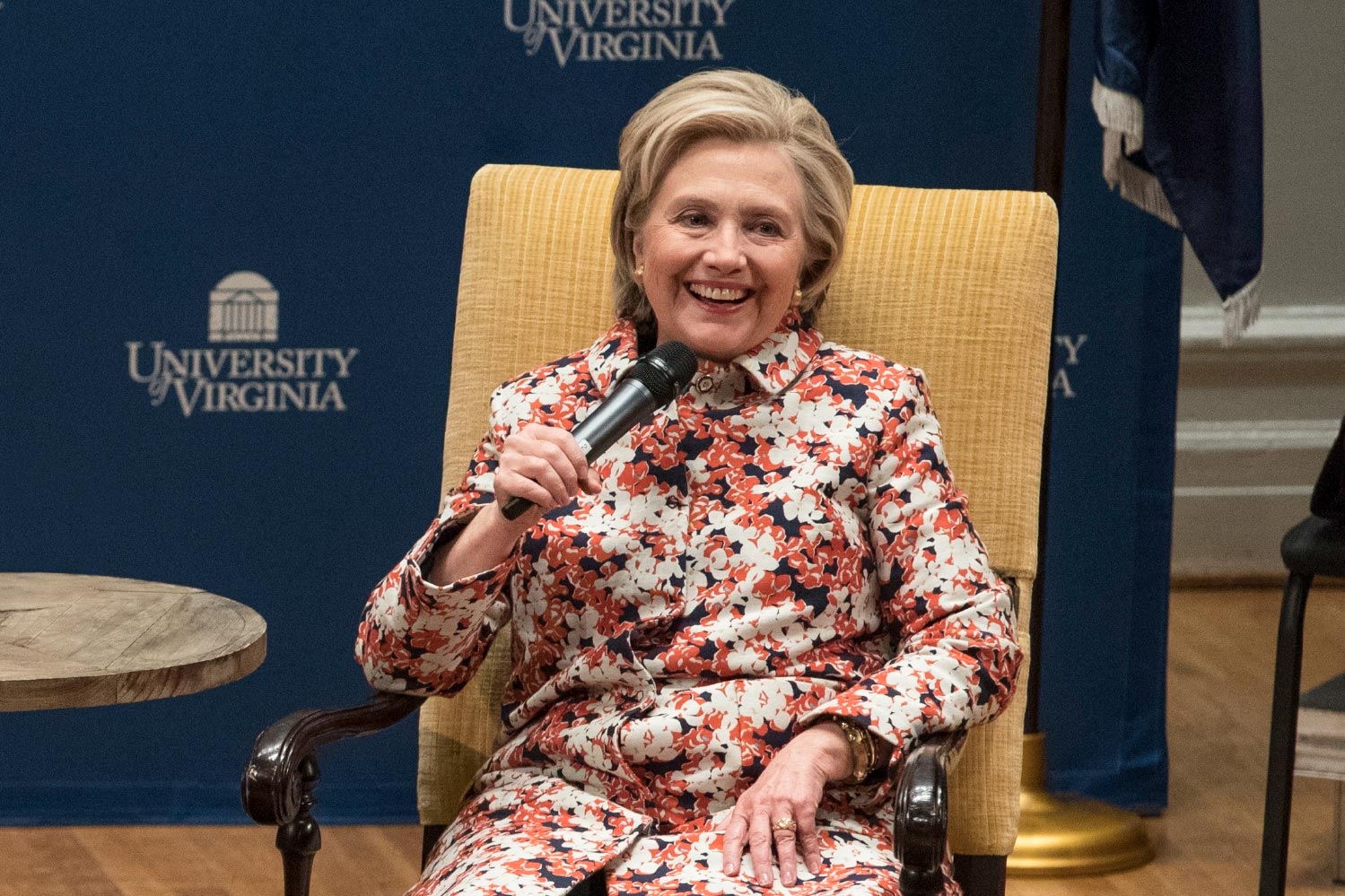 Former Democratic presidential nominee Hillary Rodham Clinton said her party’s huge wins in Virginia’s Nov. 7 elections were “about as close to a silver lining as you can get” to her defeat in the 2016 presidential election.

Speaking Tuesday afternoon to an enthusiastic audience at the University of Virginia, Clinton said it was thrilling to know that her loss to Republican Donald Trump had inspired women to step out of their comfort zones and run for office.

In Virginia, that resulted in a 67 percent increase in the number of women in the state legislature after this month’s elections. Democratic gubernatorial candidate Ralph Northam also defeated his Republican opponent, Ed Gillespie.

“I think that the contrast between the inauguration and then the next day – the [women’s] march was something that I think began a movement that so many people, in particular women, want to be part of,” she said.

Speaking of Virginia’s election results, Clinton said, “I was thrilled, because that’s what it is going to take, and unless we actually have people running for these offices, we can’t win.

“They were first-time candidates. They were motivated. It was a really good sign. Now we have to keep it up.” 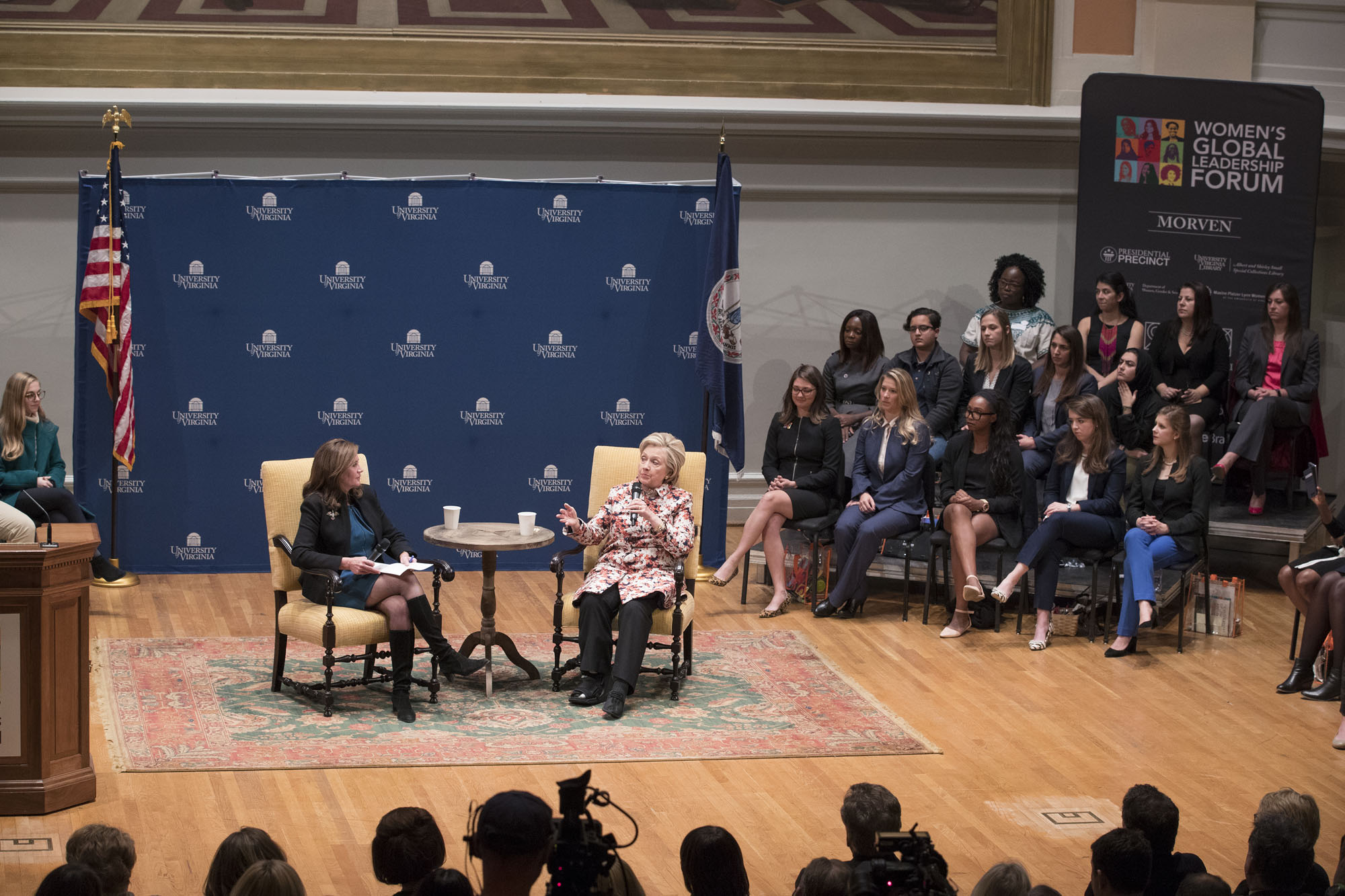 A packed house greeted Clinton with a rousing standing ovation as she took the stage in the Old Cabell Hall auditorium, where she last stood in 2008 when she was on Grounds to participate in politics professor Larry Sabato’s course, “An Introduction to American Politics.”

The former secretary of state, U.S. senator from New York and first lady said that “bringing women together globally to talk about leadership is not only worthwhile, it is necessary.”

Leadership, she said, should not just be in the political realm, but she focused her remarks on leadership in politics.

“It still is kind of depressing to think about,” she said.

Not pulling any punches, Clinton said that when she was seeking the presidency, “In my case, seeking to do something no other woman has ever done, the double standard is excruciating, alive and well, in ways that are almost too numerous to count.

“I say in my book” –  “What Happened,” released this fall – “that the only way we are going to get sexism out of politics is to get more women into politics,” she said.

Regardless of their politics, women need to accept the fact that diminishment of any woman is a diminishment of all women, Clinton said. “You and your daughter and your granddaughter will be constricted, will be in some way limited, because expectations about you will have been shaped.”

On alleged Russian meddling in the 2016 presidential election, Clinton said Moscow “is still trying to undermine our democracy. This is the first time we have ever been attacked by a foreign adversary and done nothing.”

Alluding to President Trump, Clinton said, “If you cannot win a fair fight in an election, you don’t deserve to win.”

“They catch the car and then they all look at each other and are like, ‘What does that mean?’”

Dorothy McAuliffe asked Clinton what the future holds for her, and she was resolute.

“I’m going to continue to play a role the best I can in speaking out, particularly about issues I think are important to the country,” she said.

What Is the ‘4th Side’? END_OF_DOCUMENT_TOKEN_TO_BE_REPLACED