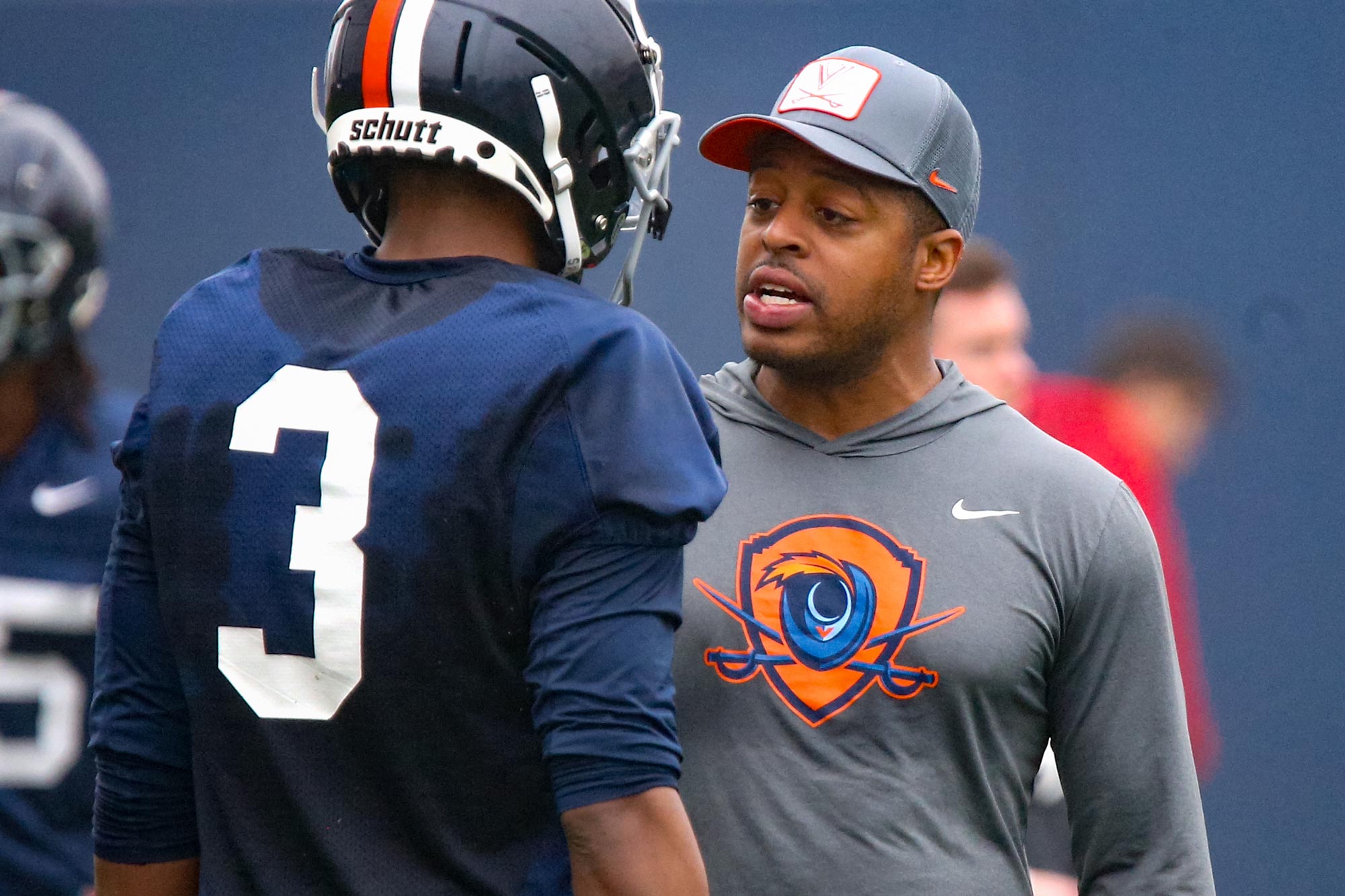 When University of Virginia associate head football coach Marques Hagans was a star player at UVA in the early 2000s, one of the things he enjoyed most about game days was the “Wahoo Walk,” a custom in which Cavalier players, in full uniform, walked along Alderman Road and into Scott Stadium as Hoos fans cheered them on.

The Wahoo Walk was discontinued sometime after Hagans graduated from the University, but this year new UVA head football coach Tony Elliott has decided to bring it back, starting with this Saturday’s Blue-White game at Scott Stadium.

“The seniors asked for it. Coach Elliott heard them and he put it into motion,” Hagans said. “It’s just giving fans, friends and families the opportunity to see the guys before they prepare to go into battle.

“Hopefully it will be a big part of our home game routine for years to come.”

On Saturday, the team will arrive at Scott Stadium at approximately 2:45 p.m. for the Wahoo Walk. Fans can join the UVA cheer squad as they welcome the Cavaliers on the southeast corner of Scott Stadium off Whitehead Road. The gates open at 2:30, with on-field activities for children; the game starts at 4 p.m.

Hagans said he has fond memories of fans greeting him just before he would enter the stadium.

“It was a much longer walk then – I’m glad Coach (Elliott) has condensed the walk,” said Hagans, laughing.

UVA Today caught up with Hagans – who played under Al Groh and has now served as an assistant coach under Mike London, Bronco Mendenhall and Elliott – for a wide-ranging discussion about his career, this year’s team and the “Groundskeepers” social-justice initiative he helped create in the aftermath of the events of Aug. 11 and 12, 2017, when white supremacists marched through Grounds and, a day later, massed at a rally that ended in violence and the deaths of Heather Heyer and two State Police troopers.

Q. As one of the longest-standing coaching staff members, what is it about Charlottesville and your alma mater that has kept you here when I imagine, over the years, you’ve had opportunities to go elsewhere?

A. I would say the people, No. 1. This place means a lot to me, obviously. I played here, graduated from here, had a chance to get drafted [into the NFL] from here. Some of my best friends went here, I met my wife here … so this place is special. And there were a lot of people who helped me along my journey.

Q. You played under Al Groh and now you are coaching under Tony Elliott. What are some things you think you’ve learned from each of them?

A. I think just a wealth of knowledge of the game from Coach Groh. When we were in college, we were pretty much learning on an NFL level. A lot of the things I learned in college were already things I knew how to do when I got to the NFL. It was a lot situational stuff and a lot of stuff you just can’t put a price tag on.

With Coach Elliott, it’s just been learning a different way to do things. There are different ways to approach people and different ways to run an organization. He’s been somewhere I’ve never been – I’ve never played in a national championship or coached in a national championship – so he understands what [those caliber] teams and players look like. So it’s just been learning to work toward that standard and what it requires to beat those kinds of teams. And hopefully we can get our program to that same level.

Q. Every coach has a different leadership style. How would you compare Coach Elliott’s to Coach Mendenhall’s?

A. Coach Mendenhall [was] always a big-picture thinker, very organizationally driven. I think Coach Elliott loves engaging with people, loves the interaction, loves to be hands-on with almost each and every individual in the program. That’s a daunting task, but something I think really means a lot to him. Coach Mendenhall definitely cared about the players as well. I just think Coach Elliott loves to be more hands-on. It takes a lot of time and effort, but I think it’s something that separates him and really contributes to the person that he is as far as the development and caring of young student-athletes.

Q. Is being a head coach something you aspire to someday?

A. I don’t know [laughing]. … Right now, I’m just focusing on being the associate head coach and doing everything that I can to help Coach Elliott be the best head coach in the country. … I just want to continue to do my part and my role and what’s asked of me. Whatever happens in the future, will happen.

Q. How does being a former quarterback at UVA influence your recruiting strategy when, say, you’re recruiting a five-star quarterback? What are the main things about the program – and the institution as a whole – that you try to emphasize?

A. Just the opportunity that they’ll have here. You can coach at a lot of places and try and bring things to life, but I think it’s a different lens when you’ve actually walked those same places on Grounds, been in those same classes, been taught by those same professors. And just [emphasizing] what it feels like to play in a sold-out Scott Stadium and your team is doing well.

It feels like you’re not only the quarterback for this team, but for the community and for the state of Virginia. … UVA is a special place. It’s not perfect, but it’s a special place and it’s very easy to talk about. To me, it’s easy to bring to light because you actually lived what you’re talking about.

Q. How does current quarterback Brennan Armstrong compare to Matt Schaub or other UVA quarterbacks who have gone on to the NFL? What makes him special?

A. Schaub was a very methodical thinker. He loved to know why the defensive ends did this or the linebackers did that. He loved the thinking part of the game. I think Brennan likes that part of it, but he really loves playing. Brennan’s the guy who, when he wakes up, he’s thinking about football. He’s the guy who, if you like go to the beach and bring your girlfriend, he’s throwing the ball there. He just loves to throw the football and I think he’s at his best when he’s playing.

I think Schaub was really well-prepared for the game, well before he played it. And that translated into games. He was in love with all the aspects of the game off the field. I think Brennan really loves all the aspects on the field. And that’s not to say that he doesn’t prepare. I don’t want to take that away from him, because he prepares hard. But he’s at his best when he’s just on the field playing football.

Q. What are some favorite memories from your playing career at UVA?

A. My memories are really catered toward time spent with my guys. I miss the joking in the locker room, the going out to eat together, going to movies. The game stuff was cool and I have a lot of memories, but honestly my best memories are just stories of us hanging out together. I think sometimes in college you take it for granted that those moments will last forever. When I look back, that was probably one of the best times in my life, just being a part of the teams that I was a part of, just the guys who I call my brothers.

Q. In the wake of the Aug. 11 and 12 tragedy in Charlottesville, you started something called, “The Groundskeepers.” For readers who may not be familiar, can you explain what it is, how it came to be and what you hope its legacy will be?

A. Basically, we just wanted to start a group where we could be advocates for change and equality. Whether that’s social injustice, gender inequality – we just want to be advocates for change and positivity. In light of that, the players came up with the cool name, “The Groundskeepers” – [as a way of saying] “Always protect Grounds.” The only way we felt we could initially start change was to start on Grounds.

People came to Charlottesville and started on the Rotunda and marched downtown, and ultimately three people ended up losing their lives. So we wanted to think of something where we could just always keep giving, per se. We thought we could always have a walk. So if people wanted to actually walk back the negativity that was brought to the Grounds and the community of Charlottesville, why not start from where it ended, where Heather Heyer lost her life? Let’s all walk back the positivity along the lines and end at the Rotunda, so that every time we represent positivity and are blocking the hate that came to Charlottesville.

On [the walking route] is the Memorial to Enslaved Laborers – so it gives you an opportunity to also pay homage to the laborers who actually helped build the University that never really got the credit. So forcing people to take a minute to read the history of the University of Virginia and pay homage to the people who built the University and give them the respect that they deserve, I think became a powerful thing.

From that, [former player] Terrell Jana didn’t wear a name on the back of his jersey because he was representing the people who were nameless on the wall. Things like that will always be options in always protecting the legacy of our Grounds, which should carry over into the community. UVA and the community should be one. We need to make sure we always have that positive association with our University and our community, and that allows us to go from there and impact the rest of the world. But the focal point will always be protecting our Grounds and making it better for generations to come.

Q. What should Hoos fans be most excited to see in the Blue-White Game?

A. I guarantee you that the Hoos will win, the Hoos will win [laughing]. But really I’m just encouraging and asking everyone within Charlottesville, Roanoke, Lynchburg, Richmond, the 757, Northern Virginia, everybody in the state of Virginia who doesn’t have anything to do this Saturday to come out and support the Hoos. It should be a great day, some good festivities and is just the culmination of hard work during spring ball. Come and support the Hoos. We’d love to have everyone out. The guys have really worked hard and I think it would be cool for them to have a good environment, to put an exclamation point on the hard work they put in during spring ball.

Netflix to Add Ads. Why This Could Be a ‘Game-Changer’ for Your Viewing Experience END_OF_DOCUMENT_TOKEN_TO_BE_REPLACED

What’s Next for UVA’s Class of 2022? END_OF_DOCUMENT_TOKEN_TO_BE_REPLACED