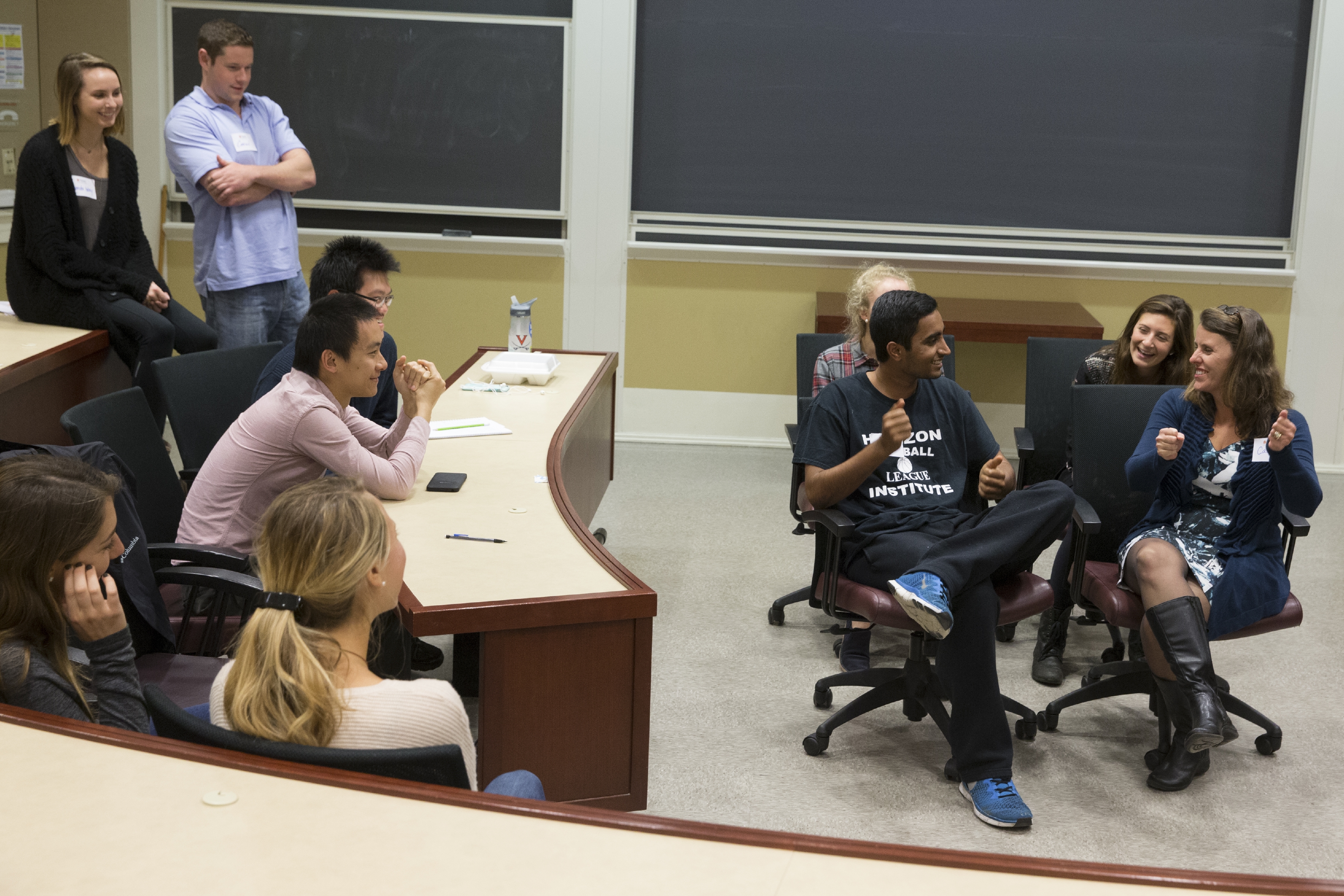 What do business executives and stand-up comedians have in common? A lot, according to Cady Garey, a University of Virginia drama professor who is using improv techniques to prepare McIntire School of Commerce students to respond quickly and effectively during tense ethical situations.

Garey recently joined students in assistant commerce professor Kerrie Carfagno’s course, “Business Communication for the Digital Age.” All semester, the class has been learning how to communicate and work through common ethical situations, especially nuanced dilemmas where there is often no one “right” answer. Garey and Carfagno’s collaboration is one of many tools being employed to help undergraduate and graduate students become principled leaders in a corporate world that is too often tainted by unprincipled decisions.

“In a 20-, 30- or 40-year career, statistically, you will be put into a tricky ethical situation,” Carfagno told the class. “In those situations, you need to be able to react in the moment, often with little preparation.”

That’s where Garey comes in.

Garey began class by asking students to turn in the assignment she had e-mailed to them earlier in the week. Immediately, the room fell silent. A few students exchanged panicked looks, others simply looked at the floor or fidgeted with their backpacks. Garey, they soon found out, had tricked them.

Garey had not e-mailed the students an assignment; she just wanted them to understand how their bodies reacted when they thought they should have done something. That, she told them, was what it felt like to suddenly realize something was wrong. When that gut feeling comes up in a business scenario, they must be able to recognize it, trust it and act on it.

From there, Garey walked the students through a series of games that comedy troupes often use when preparing for shows. They talked about how to control their breathing and facial expressions when confronted with a situation that makes them uncomfortable, how to pick up on and use body language cues from other parties and how to use their own body language to reinforce their confidence as negotiators.

“Often, when you are put in these tricky situations, you cannot prepare in the way that you are used to preparing,” Garey said.

They might not be able to control much about the situation, she said, but they can control themselves and their demeanor.

To drive her point home, Garey had pairs of students demonstrate common workplace situations and analyzed their responses with the class. Scenarios included a boss asking an employee to use discriminatory art in an ad campaign, one employee making sexually suggestive comments to another, a project leader wanting to appoint a friend over more qualified candidates, and one employee trying to convince another to neglect work when the boss was not around. Students used their newly acquired improv techniques to defuse the situation and redirect their colleagues to more ethical alternatives.

“After completing the exercises, I was surprised to discover the strong connections between improv and business,” fourth-year Commerce student Alexis Unwalla wrote in an e-mail. “I had never viewed business as an ‘exchange of personality,’ but after acting out some scenarios using improv techniques, it became clear. Communicating in the business world is a challenge similar to how you phrase your words in acting and performance.”

Both the Commerce School and UVA’s Darden School of Business work to incorporate ethics into every level of student learning.

“We do not position ethics as a stand-alone concept, isolated from the rest of the curriculum,” said Darden professor Andrew Wicks, who directs Darden’s Olsson Center for Applied Ethics. “We push students to think about the moral dimensions of the choices they make and develop a larger framework for making those choices.”

Darden’s case method – which forgoes lectures in favor of classroom discussions on a specific business case – works particularly well for teaching ethics, as students must constantly speak up to defend their choices and discuss their options with classmates. The school also has students complete 10 online simulations of ethical situations, with dilemmas similar to those that Garey posed to her undergraduate students.

One simulation, for example, casts students as managing executives of a large toy company, asking them to decide if they will sell a particular toy and how they will market it to children. Students must consider the moral and safety implications of their strategy while trying to please a boss focused on the bottom line.

“The power of the case method, as Darden teaches it, is that it helps students own the conversation and see what is at stake,” Wicks said. “We want to help them see that every choice they make has a moral dimension to it, that it is an inescapable part of what they do.”