Game On: Batten Students Prepare to Save the World 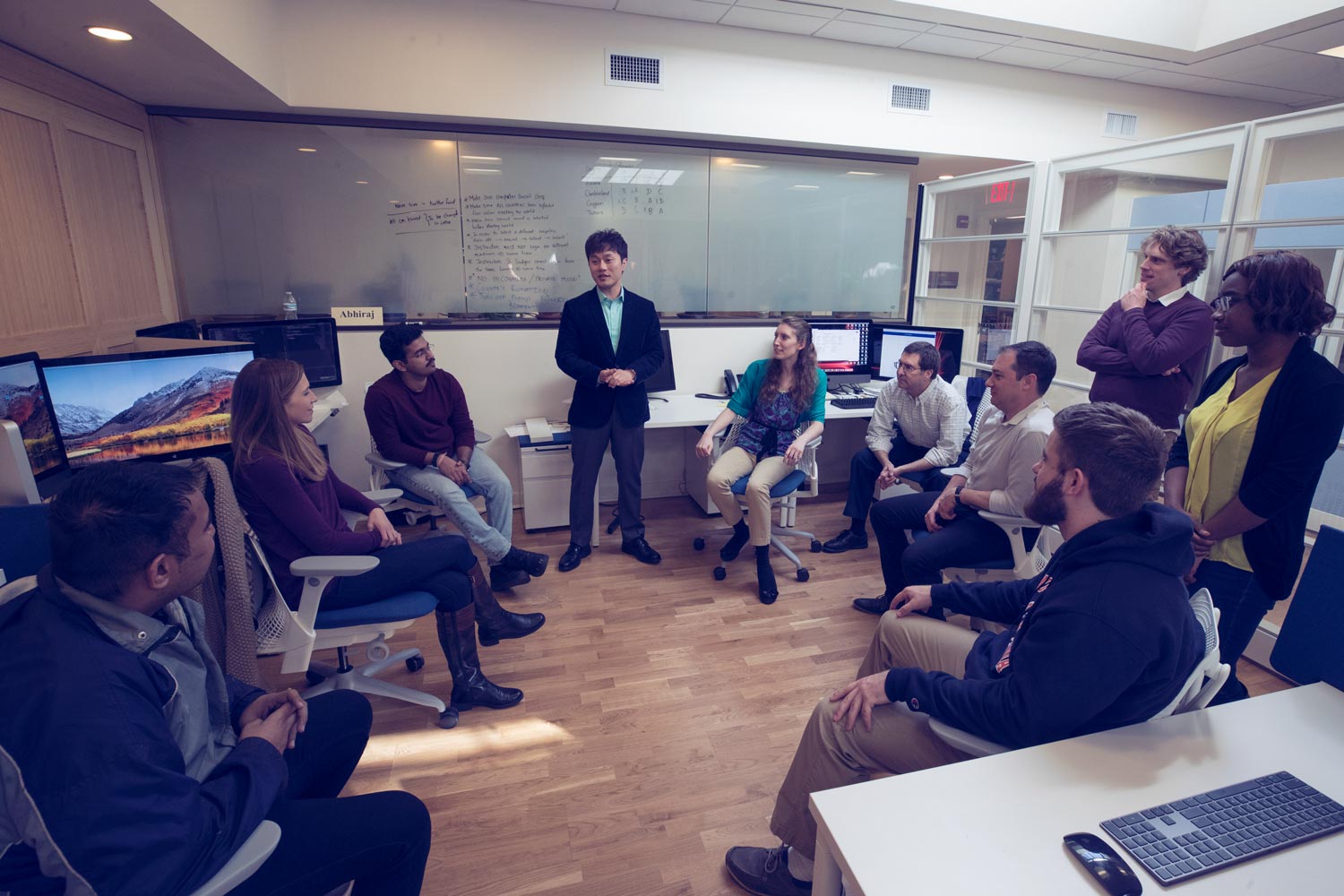 Should they close their borders? Ban travel? Shut down schools? What about setting up a quarantine?

Playing the roles of the leaders, students from the University of Virginia’s Frank Batten School of Leadership and Public Policy wrestled with the questions during a real-time crisis simulation, which was led by the Center for Leadership Simulation and Gaming at Batten and took place at 16 host universities around the world over the last weekend in February and the first weekend in March.

The competition, held in conjunction with the Network of Schools of Public Policy, Affairs, and Administration, included more than 550 public policy students from 159 universities in 27 countries.

“It was tricky,” Batten student Kathryn Babbin said, “because you really had to think about how many people were infected, how many deaths you had, what was the state of the economic situation, what was public opinion of you.

“You really had to learn how to balance all those elements.”

The 100th anniversary of a major Spanish flu epidemic and 15th anniversary of the SARS breakout – coupled with the rise of flu deaths in recent years – was Batten Assistant Professor of Public Policy Noah Myung’s inspiration for basing the annual event on a flu pandemic.

Myung, who serves as Batten’s director of leadership simulation and gaming, and his team spent six months creating what seems – at first glance – like a modern-day version of the board game “Risk,” but is far more nuanced.

“It’s a public policy game, so I wanted the decisions to impact lives, politics, the economy – and so all those features are built into the game,” Myung said. 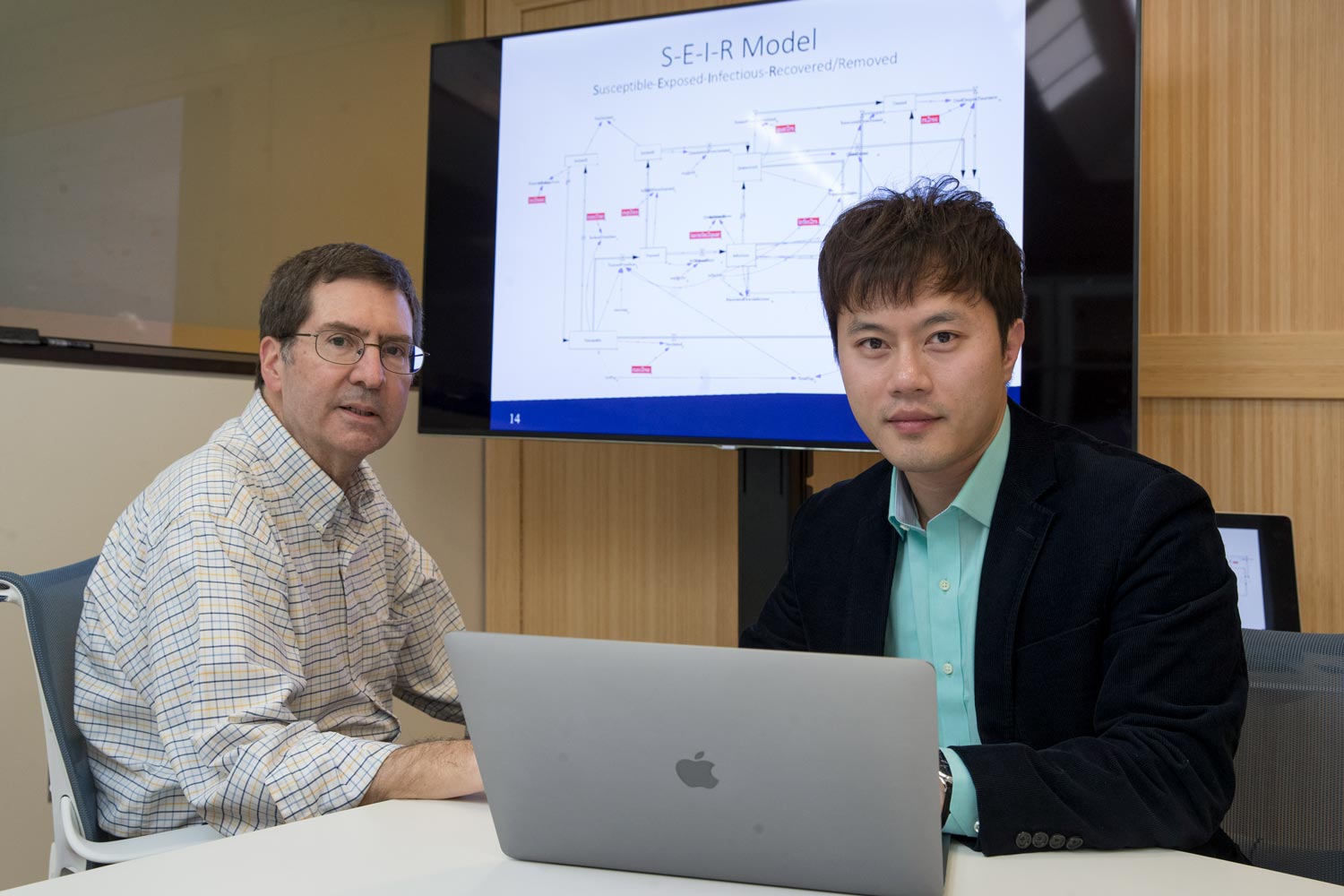 In contrast to the previous year’s global food security simulation, in which participants had an hour to make a single decision, the scenario created by Myung and his team – led by senior developer Andy Ortiz, a retired physician – required multiple decisions to be made rapidly.

“If there is an outbreak, you can’t sit there for weeks and think about what you’re going to do,” Myung explained. “You better be reactive – and proactive, too.”

Students on each three- to five-member team were assigned roles: prime minister, minister of public health, minister of finance, World Health Organization representative and a head of communications.

As a game clock ticked down on a computer screen in front of them, students were required to quickly process information.

Where was the virus spreading? How many fatalities were occurring?

If it was within their country’s budget, the students could purchase vaccinations. If it wasn’t, they could raise taxes in order to do so – though that would have an effect on their approval rating.

Everything was a giant balancing act.

“If there is an outbreak, you can’t sit there for weeks and think about what you’re going to do. You better be reactive – and proactive, too.”

And, with six months of global activity being compressed into four, one-hour rounds, everything was moving at warp speed.

“It was a good reminder that, in the heat of the moment, policy is complicated,” said Babbin, a first-year student in the Master of Public Policy program. “When we’re sitting in the classroom, it’s easy to say, ‘Oh, this is obviously the right choice.’ But when you’re sitting there and you have all of these things coming at you and you’re watching the number of infections rise, you really have to make snap decisions when you don’t always have all of the information that you wish you did.

“Sometimes you just have to make an educated decision.”

Babbin and fellow Batten students Sisi Fan and Matthew Hensell, who traveled to Carnegie Mellon University’s satellite branch in Washington, D.C. to compete, were all on different teams.

Each team represented an imaginary country, but all the data they received came from an actual country. Only at the end of the competition did the students learn which nations they had been playing.

In the first round, Babbin’s team scored only 2 points out of a possible 100 because they didn’t realize the types of facemasks they had purchased to keep the virus from spreading had proven ineffective.

But in the next round, the squad scored an 85 and wound up being one of the D.C. site’s winners.

In some cases, the simulation taught students about what not to do. For example, closing schools for anything less than two weeks is not long enough to stop or slow down the spread of a highly contagious disease, according to Myung.

In a similar vein, Myung said quarantines work well for diseases like Ebola, but not the flu. “By the time you quarantine, people are already infected because they are infectious long before they get quarantined,” he said.

Myung said the simulation is an example of the experiential learning Batten prides itself on.

“Teaching students about the fundamentals using theories and principles to build their foundations is essential, but if we stop there, I think we do our students a disservice when we send them out into the real world to work in industries and the public policy arena,” he said. “Some of them may end up with [the Centers for Disease Control] and will have to make these time-sensitive decisions, but they may have never had the experience that they need to.

“Given the advancement in science and technology, we should be able to help bridge the gap between the structure of learning and the real world.”

Myung wonders how many lives could have been saved if world leaders had received this type of training before the Spanish flu hit 100 years ago.

“In the game, you wind up killing people – that will happen,” Myung said. “But better in the simulation than in the real world. If you did something wrong, you can come back and redo it and learn from it. That’s why we play four rounds in the competition.

“Hopefully they get better at it with practice.”

Here Is What You Need to Know About the New Coronavirus Variant, Omicron END_OF_DOCUMENT_TOKEN_TO_BE_REPLACED

Fall Is in the Air on Grounds END_OF_DOCUMENT_TOKEN_TO_BE_REPLACED

Meet the Cats and Dogs Your CVC Donation Supports END_OF_DOCUMENT_TOKEN_TO_BE_REPLACED