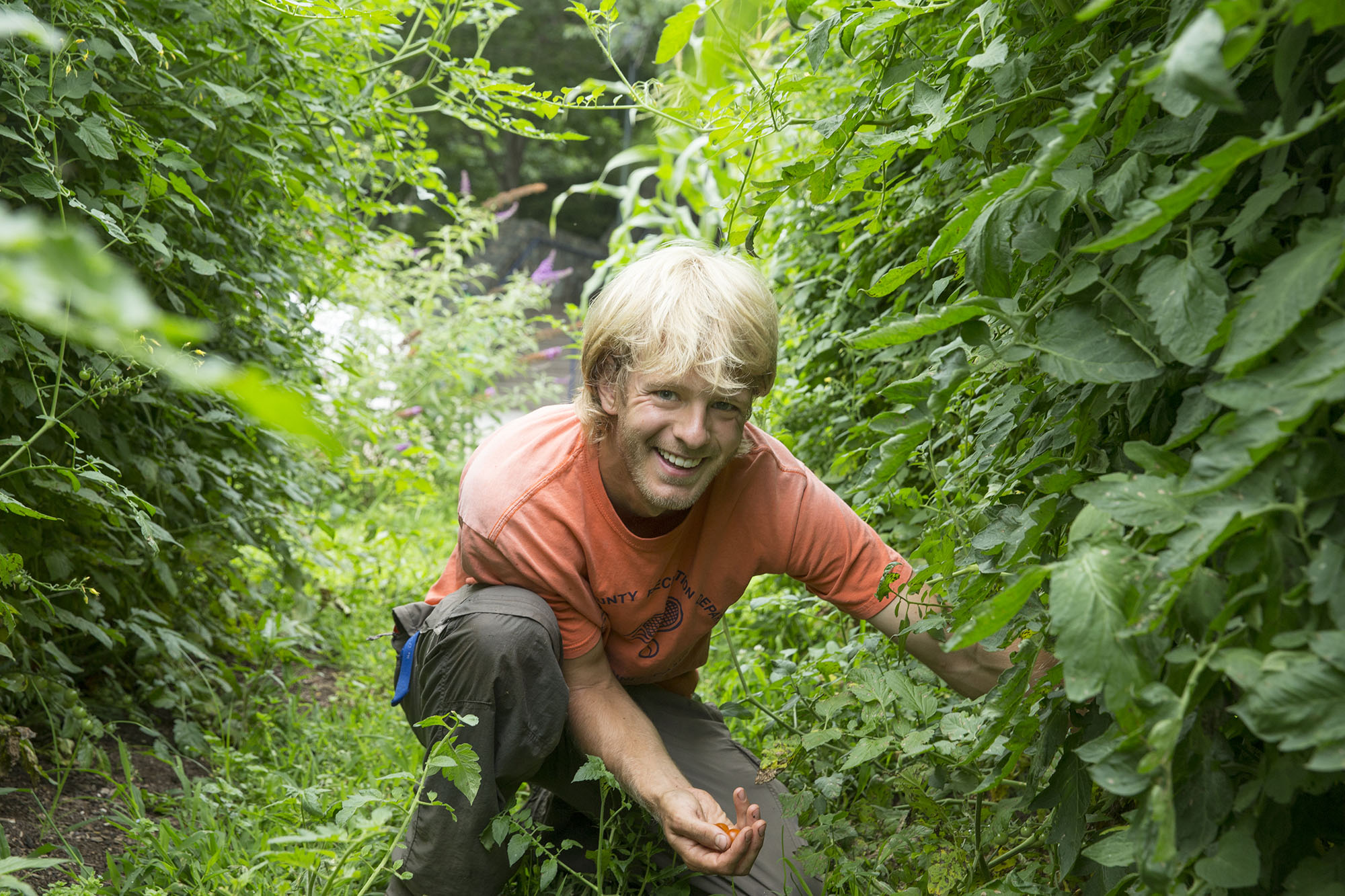 A few dedicated students have remained in town for the summer to maintain three vegetable gardens. The Morven Kitchen Garden has a student manager, two interns and volunteer labor to run a community-supported agriculture operation; the Hereford Residential College Garden has a manager and interns to run a garden that supplies food to the college’s residents; and the community garden at the intersection of Alderman and McCormick roads is run by volunteers who provide themselves with food.

Volunteers in the student-run community garden tended their plots recently, condemning weeds to the compost heap, shooing bugs off the squash plants and thinning out no-longer-productive plants.

Caroline Herre, 21, of Norfolk, who graduated in May with a degree in economics and is now a master’s candidate in the School of Architecture’s urban and environmental planning program, grew up gardening.

She started a community garden at her high school and got involved with U.Va.’s community garden as soon as she arrived. After three years in on-Grounds residence houses, Herre now has an apartment with a container garden of peppers, tomatoes and herbs on her balcony.

“This makes me happy,” she said, looking around the community garden, which is a few hundred feet of raised beds. “This is something outside myself, something that is not 100 percent devoted to a potential career. I come here to clear my head, for some stress release.”

She said gardening is a good way to learn to work with people and to learn patience.

The community garden, started in 2009, is overseen by U.Va.’s Student Council to teach students about raising food and sustainability. The students work inside wood-framed raised beds containing tomatoes, kale, squash, cucumbers, asparagus and a variety of herbs, including dill, cilantro, rosemary and sage.

Herre, a member of the garden leadership team, said that only some of the volunteers are experienced gardeners. The plot can also be used for experiments, she said; one student tested cultivation techniques for potatoes, and the group is now trying to work with the insecticidal aspects of flowers.

“Marigolds are supposed to go well with vegetables and keep away insects,” Herre said, nodding toward a bed of tall, reddish-orange flowered plants. “Now, the pansies we had this spring were 100 percent for show.”

The student-run Hereford Residential College Garden, first planted in 2007, also exists for educational purposes, with students growing and preserving their own food while also learning about crop rotation and soil amendments. The plot is divided into two cultivated patches, with grassy pathways between planting beds.

“This fall we will offer an introduction to canning and an introduction to drying [herbs] workshop,” said Ethan Strickler, manager of the garden. The Hereford Garden course will be taught by Elizabeth van der Els, a graduate student in architecture.

Strickler said the roughly one-eighth-acre parcel is producing tomatoes, cucumbers, peppers, squash and carrots, plus a variety of lettuces and herbs, such as mint, thyme and basil – all grown organically – for Hereford residents, friends, family and volunteers.

“When school is in session, we will also supply vegetables and herbs to Greens to Grounds, a student-run organization that supplies fresh vegetables to students,” Strickler said.

Strickler, who did his undergraduate studies at the University of Richmond, has been working with Hereford Garden since last winter. He was raised on a farm in Mercersburg, Pennsylvania, and after he earned his geography and environmental studies degrees, he worked for a year each at Bending Bridge Farm in Mercersburg and at Potomac Vegetable Farms in Loudoun County. Strickler is studying to be an urban planner – though he said he prefers being a rural planner – and he is currently working with the Highland Center in Monterey, a non-profit organization committed to cultural and economic development in the Alleghany Highlands region of Virginia and West Virginia.

At Morven Farm, southeast of Charlottesville, student volunteers operate a community-supported agriculture operation that supplies vegetables weekly to a membership that peaks around 26.

“We try to keep it small,” said Emily Salle, who manages the Morven garden. “We’re constrained by the amount of labor we have. Our two paid interns, Tom Jackson and Maria Rincón, handle more than 90 percent of the work on the farm during the summer, and the rest is a combination of me and the volunteers.”

Jackson is a third-year biology major from Greensboro, North Carolina, and Rincón is a third-year global sustainability and environmental sciences major from Madison. Once school is back in session, the Kitchen Garden will be cared for entirely by volunteers.

“[Jackson and Rincón] are the true stars of the show during the summer,” Salle said. “They work daily on the farm and are also responsible for running the summer CSA program and helping to plan our open house in August.”

Salle, 22, of Richmond, has managed the farm since last April, a post she will continue through the coming fall, with a new manager starting in December. A May graduate with a degree in environmental science, Salle said she has had an evolving interest in farming for years and has worked with bees and labored on an organic farm in Northern Spain and several operations in the U.S.

While Morven provides vegetables to its customers, the Boar’s Head Inn, and, once school starts, to Greens to Grounds, the bulk of the students are gone during the prime growing season. Salle plans to extend the season with a “hoop house” – a kind of temporary greenhouse – purchased with a Green Initiative Funding Tomorrow grant. The volunteers are constructing the 75-foot structure and hope to have it finished by the start of school.

“It would allow us to continue and have year-around production,” Salle said. “It is crucial for off-season production. We are a student organization, but the students are here on the off season.”

Rincón said about 15 to 20 volunteers are working in the garden this summer, usually in twos and threes. The labor-intensive garden is completely organic, with no pesticides or herbicides, cardboard between the rows to keep weeds down, old hay as row covers, and flowers, such as zinnias and marigolds, to attract pollinators.

“This is the first CSA I have joined,” said Nina Morris, sustainability program manager for outreach and engagement at Facilities Management. “The vegetables are grown 15 minutes from my house, and it supports students who are doing a good job with the land.”

Morris said the produce has been “wonderful” and the volunteers provide her with hand-written recipes for some of the vegetables.

Rincón said the garden takes up about a half-acre, sharing the plot with a biology lab that is running experiments with sunflowers.

The students will celebrate the end of the summer season and the start of school with an open house, called “Gazpacho in the Garden,” on Aug. 27 from 5:30 to 8 p.m.

The gardens have also seen some famous people. Author and organic farming legend Eliot Coleman visited the Hereford Garden in 2011, and celebrity chef Alice Waters stopped at the community garden to talk with students about fresh food in 2012.