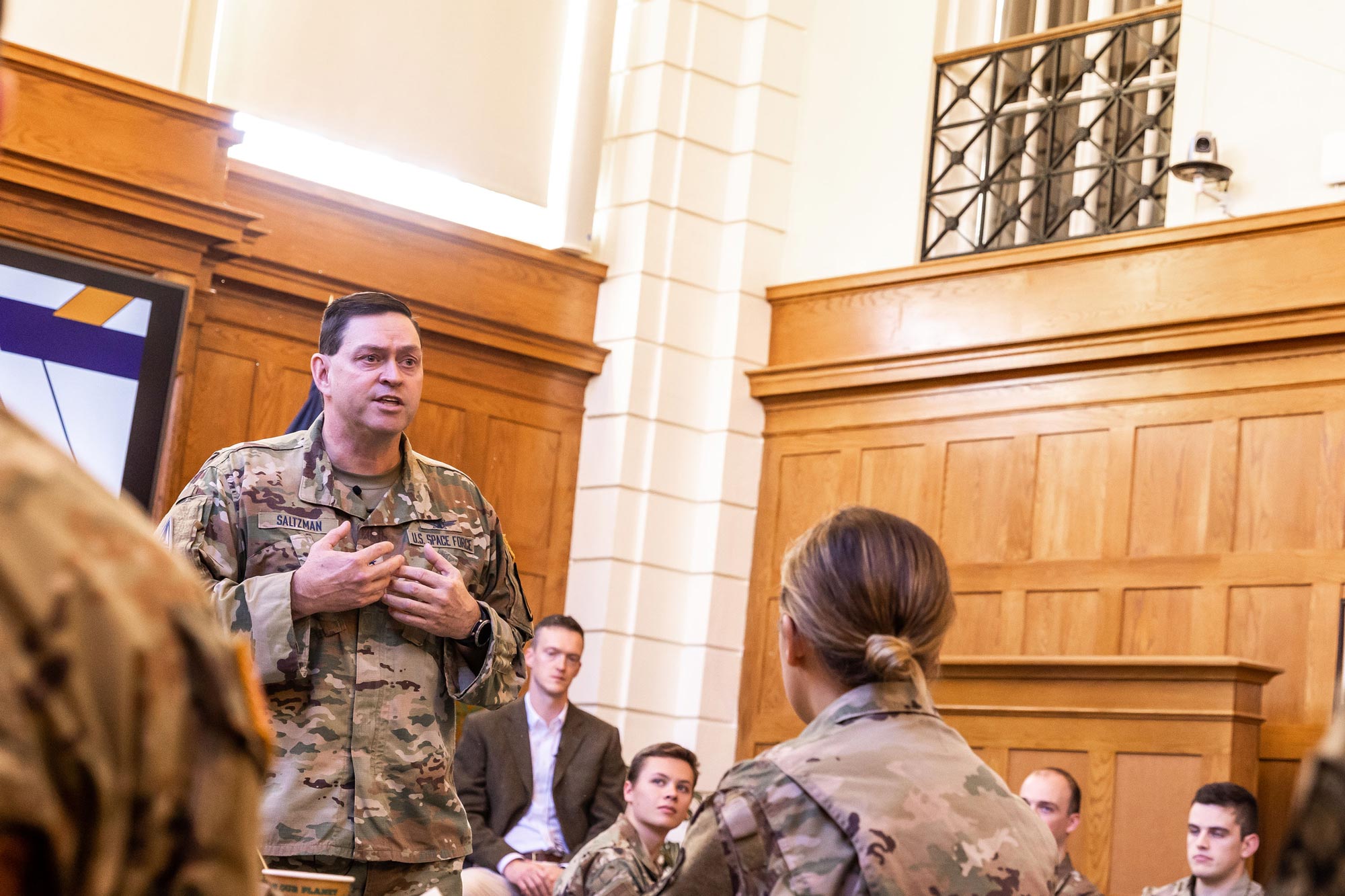 Gen. B. Chance Saltzman outlined the characteristics of leaders and how important it is for younger people in the military to exhibit these qualities in lower echelons. (Photo by John Robinson, Robinson Imagery)

Gen. B. Chance Saltzman promoted the newly created U.S. Space Force and discussed the qualities of leadership to a gathering of University of Virginia students and ROTC cadets on Saturday.

Saltzman, the chief of space operations for the Space Force, addressed the students at the invitation of the National Security Policy Center at UVA’s Frank Batten School of Leadership and Public Policy. Saltzman, who had been in the job about 10 days when he visited Grounds, encouraged the students to consider the Space Force for military and civilian posts.

The Space Force was established in 2019 as the first new branch of U.S. Armed Services in 73 years. Saltzman said that having a presence in space is a national security imperative.

He said people need to recognize the importance of satellites in their lives, from global positioning systems and television transmission to weather monitoring and internet banking. He said China and Russia have strategic capabilities to disrupt satellites.

“These are real operational capabilities they demonstrate for everybody to see,” he said. “Their intent, if you read their documents, is very literal, and their goal is to destroy U.S. strategic advantage in space by destroying the satellites.”

Saltzman, who spoke at a breakfast gathering at Garrett Hall, said public service in the military or national security is “one of the most fabulous callings” a citizen can have.

“A calling is an attraction to work for the benefit of others, something larger than yourself, beyond self-interest. It is hard work, and you don’t always get compensated or rewarded for it to the level it deserves,” he said. “You still have to be good at it. Leadership is so important in managing public service.” 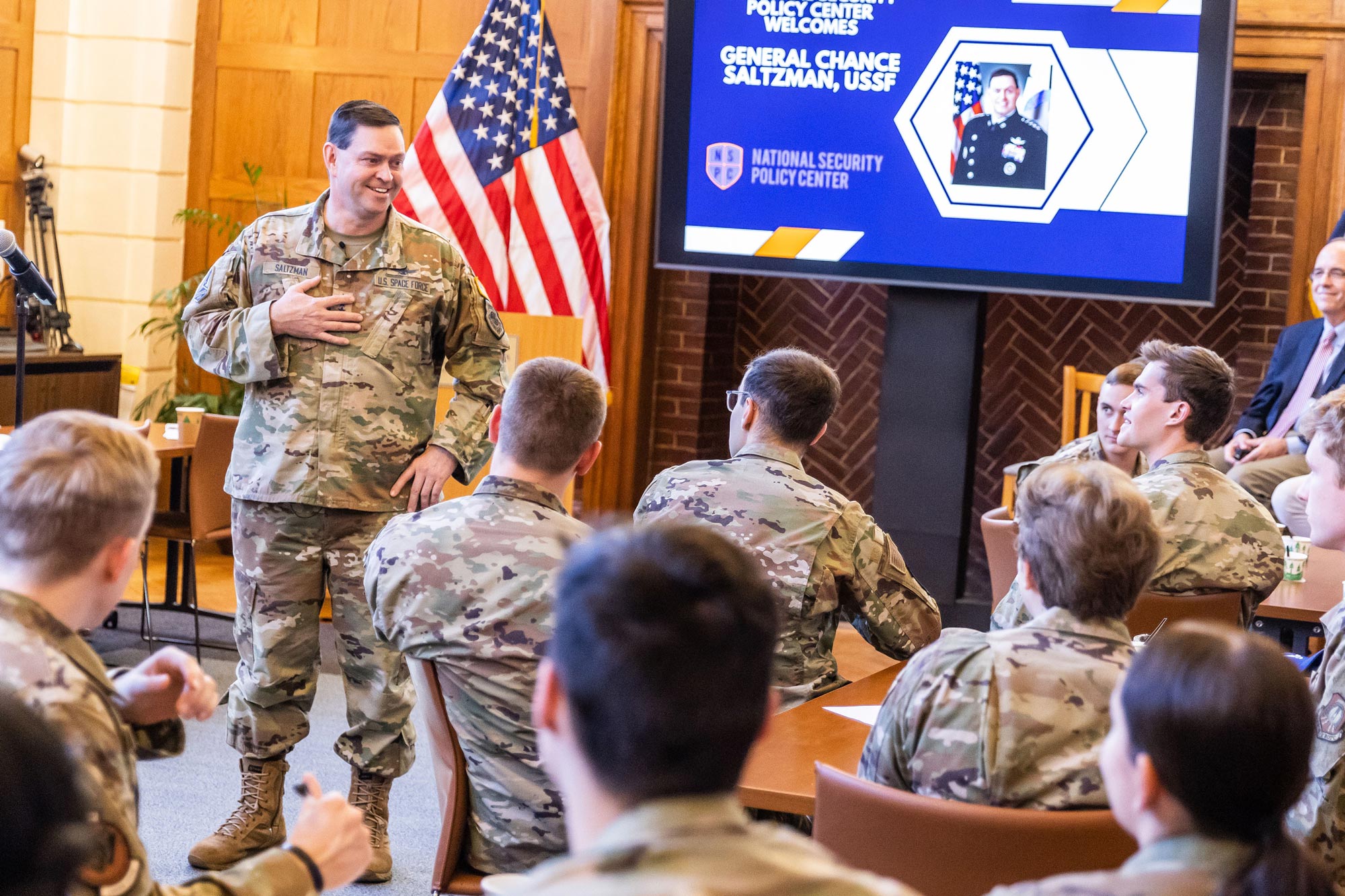 Saltzman said the military can present difficult choices between the job and personal life, and advised cadets to seek a balance.

“You have to know your values in order to make these decisions,” he said. “Sometimes the choice is to leave work for a home event, sometimes it’s the opposite, but as long as you are making these decisions in line with your values you will always make the right choice.”

He said there is a lot of pressure to get things done and take the path of least resistance, but it is important to do things right.

“We won’t have time to come back and do this again, so we can’t just ‘get it done.’ We have to get it right,” he said. “I think it takes character to always be reminding yourself about those things.”

He said doing things right requires an element of courage to call out incorrect policies and put your reputation on the line. He told the students that to lead, they need to have connections with others.

“Leadership is a complicated human endeavor,” Saltzman said. “It takes social skills that none of us will master in a lifetime of pursuit. Leadership is about motivation, which is an inherent social skill, but if you can’t connect with somebody, it is almost impossible to motivate them.”

Saltzman said having a sincere connection with people can bring diverse perspectives to an issue.

“It takes a lot of factors to make a decision correctly and sometimes that key factor is the one thing I don’t know,” Saltzman said. “Have I connected well enough that people feel comfortable to bring me the perspectives I need so the decision can be made as well as it can be?”

Leadership, Saltzman said, also requires a commitment to see the project through to the end. That means showing up every day with the right attitude.

“It takes a special kind of person, and that is why I say that public service is a calling,” Saltzman said.

In response to student questions, Saltzman said the Space Force relies on civilian personnel for expertise. It can take years to bring people up through the ranks, but he said experts can be hired from the private sector. Civilian employees tend to stay in jobs longer, develop institutional memories and can bring new perspectives.

“The value I get out of listening to young people is that you don’t bring baggage,” he said. “There was no way I could get 28 years of Air Force out of my head when I took over as chief operations officer.”

Saltzman said the Space Force is a young operation that needs to be built up.

“We need to recognize we are a start-up company. Literally. We are 2 1/2 years into this endeavor, and we haven’t figured it all out yet,” he said. “I need everybody thinking ‘what can we do better next time?’ Critical thinking will be important.”

In Memoriam: Life of Drama Professor To Be Honored Sunday END_OF_DOCUMENT_TOKEN_TO_BE_REPLACED