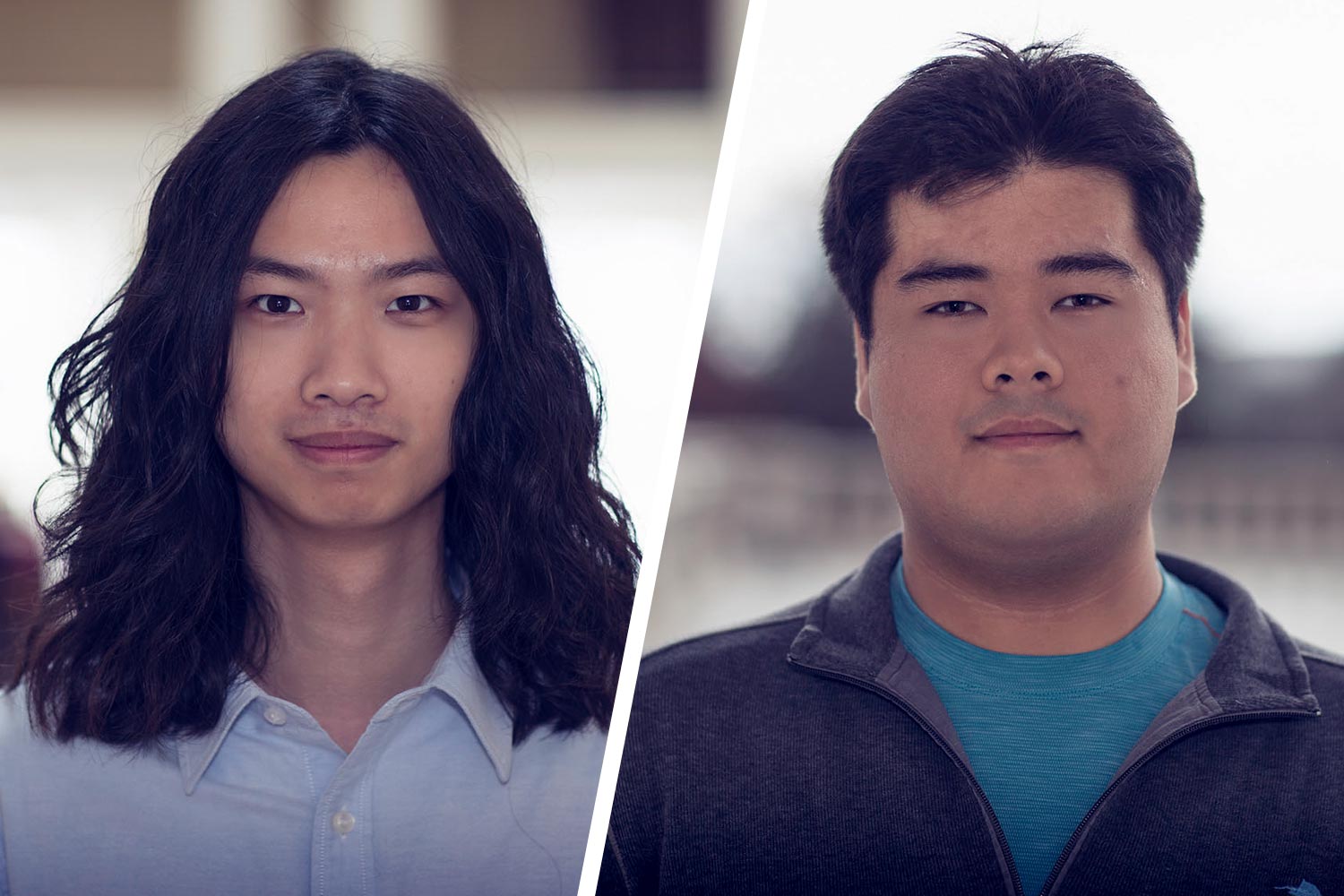 Li, of Las Vegas, a third-year physics and mathematics double-major, is currently investigating gravity as an emergent phenomenon of quantum field theory under certain special conditions.

“Gravity, at least as envisioned by Einstein, is incompatible with quantum physics,” Li said. “This is a major issue in theoretical physics. The search for a resolution has attracted many physicists across generations. Such resolution could have an enormous impact on our understanding of the universe from subatomic to cosmological scale.”

“In Hamiltonian mechanics, one describes physical systems in terms of the dynamics of certain vector fields which, when restricted to appropriate energy levels, become ‘Reeb vector fields,’ Haney said. “These are fundamental objects in contact geometry that reflect symmetries between the positions and momenta of physical systems. The existence of periodic trajectories of these vector fields is a central dynamical question, and [has been] the focus of my work specifically.”

Li and Haney are among 211 students selected for the Goldwater Scholarship this year, from a pool of 1,280 nominees selected on merit. Of those reporting, 110 of the scholars are men, 99 are women, and virtually all intend to obtain a Ph.D. as their highest degree objective. Twenty-nine scholars are mathematics and computer science majors, 142 are majoring in the natural sciences, and 40 are majoring in engineering. Many of the scholars have dual majors in a variety of mathematics, science, engineering and computer science disciplines. The one- and two-year scholarships, which are awarded to second and third-year students, cover $7,500 per academic year.

Mark Whittle, a professor of astronomy, said Li is a likable student who is independent in his work.

“An acid test of a student is whether you can give them general guidance, and they figure out the details themselves,” Whittle said. “Chris was able to do that, even as a first-year. Overall, his work was fast, thorough, creative and error-free – a great combination that suggests he will thrive at research. He always wears a smile, and is quick to chat about pretty much anything, but especially new and interesting developments in physics and astronomy.”

Diana Vaman, an associate professor of physics, said that Li enjoys big challenges. As a second-year student, he took her “Introduction to String Theory” course, usually attended by fourth-years and grad students.

“Chris seems to have a mantra: the bigger the challenge, the greater the enthusiasm to tackle it,” she said. “Before signing up for the course, Chris talked to me and I tried my best arguments to convince him that a sensible course of action for him would be to take the course a year later. He would not listen to reason. He thought he could do it. And sure enough, he took the class and earned an ‘A’ at the end of the semester. Chris is definitely not a typical undergraduate student.”

“I began working with him last summer, as mentor for his research project in a branch of mathematics called contact geometry,” Mark said. “Sebastian has a great ability to learn new and difficult concepts on his own, and has a quiet confidence in his ideas that serves him very well. After the summer ended, he continued the research project, with much less direct input from me, while also keeping up with several graduate-level mathematics courses. It has been a great experience to work with him and I’m looking forward to seeing how far he will go.”

“Sebastian Haney is one of the most remarkable math majors at UVA in the last 10 years,” said Mikhail Ershov, a mathematics professor. “Still in his second year, he is already taking primarily graduate classes and is working on an advanced research project. Sebastian is extremely motivated and energetic and feels comfortable with very abstract mathematics. I am highly impressed by his progress and his accomplishments.”

Li is a member of the Sigma Pi Sigma Physics Honor Society; the Society of Physics Students; the Math Club; the Astronomy Club; and the Phi Eta Sigma Honor Society. He is a recipient of the Physics Department’s Mitchell Research Scholarship. A graduate of Virginia Episcopal School in Lynchburg, Li plans to pursue a Ph.D. in theoretical high-energy physics.

“Specifically, I want to conduct research in string theory and search for a more fundamental theory that answers some of the most interesting questions of the universe,” Li said. “My ultimate goal is to further mankind’s understanding of the fundamentals of physics, such as the nature of particles and their interactions, the arrow of time and the measurement problem.”

Li said he is honored to receive the Goldwater, which he said will help him stand out when he applies to graduate schools and continues his scientific career.

“The Goldwater Scholarship is a rare recognition for undergraduates in science, technology, engineering and math who are determined to conduct research.” Li said. “I am extremely honored and fortunate to be awarded the Goldwater Scholarship. Honored because the selection committee entrusts me with such recognition, and fortunate because a strong team supported me all along. It would not be possible without the guidance of my mentors and advisers, the nomination by the University, the friends who are always by my side, and the support from my family. It is this collection of efforts that won the prize, so the credit should really go to them instead.”

Haney is a member of the Shotokan Karate Club and the Math Club. A graduate of Stanford Online High School, Haney plans to earn a Ph.D. in mathematics and conduct research at a university.

Haney also said he is honored to have won the scholarship.

“Winning Goldwater has made my postgraduate goals more achievable,” he said. “I will be able to graduate with less debt than I would have otherwise, which will let me focus on my academic and research goals. This experience has made me appreciate the opportunities and mentorship I have received as a UVA student.”

The Barry Goldwater Scholarship and Excellence in Education Program was established by Congress in 1986 to honor Sen. Barry Goldwater, who served his country for 56 years as a soldier and statesman, including 30 years in the U.S. Senate. The purpose of the foundation is to provide a continuing source of highly qualified scientists, mathematicians and engineers by awarding scholarships to college students who intend to pursue research careers in these fields.

The Bigger Picture: Starry Night in the Rotunda END_OF_DOCUMENT_TOKEN_TO_BE_REPLACED