Class of 2016: Graduating Cancer Survivor Embraces a Career As an Artist 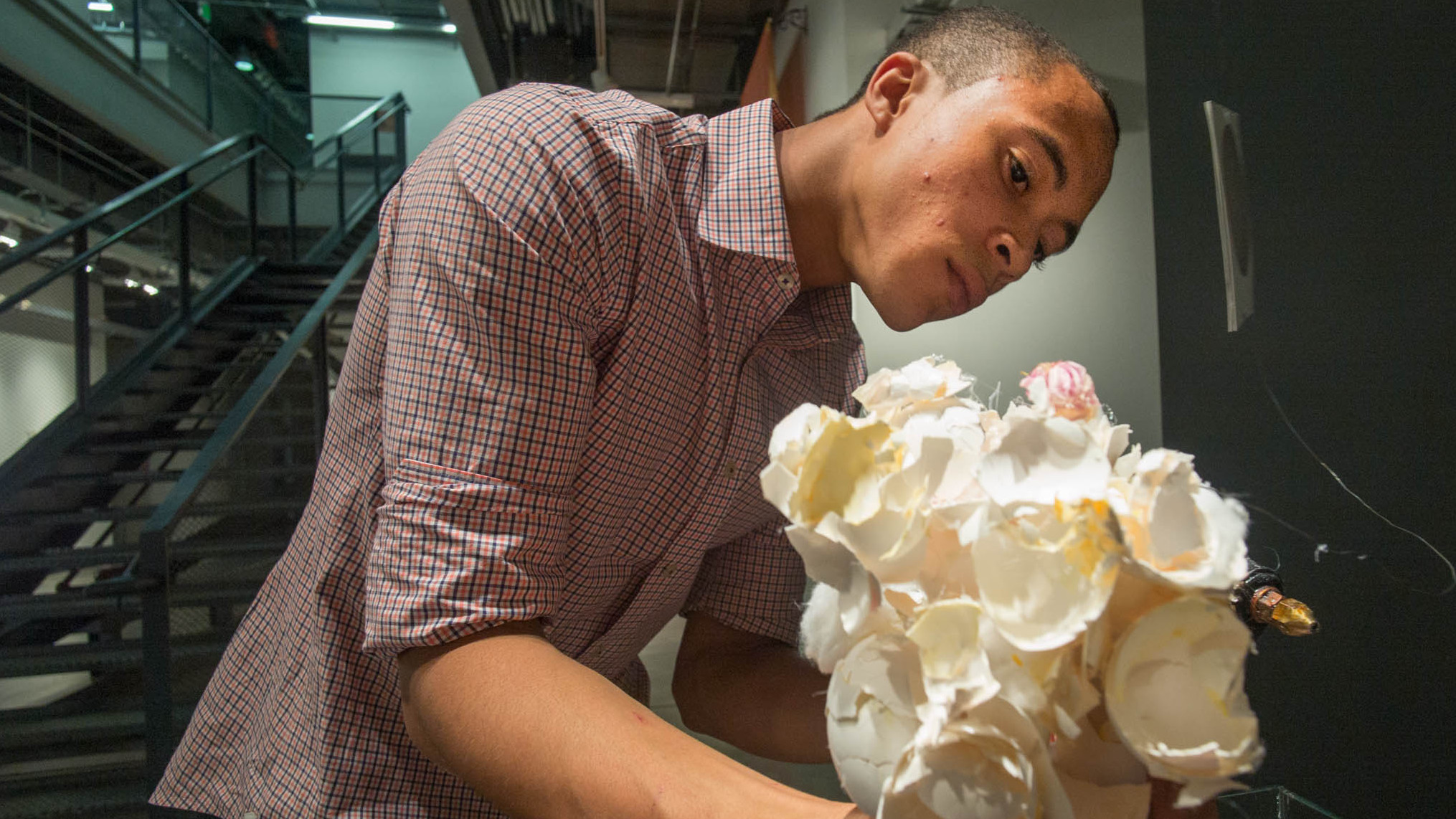 Sandy Williams IV found his niche at the University of Virginia. The fourth-year student spends hours in Ruffin Hall, working on new sculptures or making films with other students. He’s also become a regular on Charlottesville’s vibrant art scene, exhibiting his work in local galleries and festivals.

Five years ago, much of that seemed impossible – and not just because Williams was convinced that he wanted to be an orthodontist.

During his senior year of high school in Virginia Beach, Williams was diagnosed with lymphoma. Suddenly, he was not just facing a transition from high school to college. He was facing months of aggressive chemotherapy, as doctors worked to stop the cancer’s spread.

Still, Williams wanted to go to college. Despite his diagnosis and the wearying side-effects of the chemotherapy, he decided to enroll at UVA and continue his treatments at the UVA Medical Center.

“I wanted to go to school, to get out of the house,” Williams said. “It was tough and sort of a bad decision to try to do both at the same time, but I really wanted to just be doing something.”

For several months, Williams managed to keep up with both his classes and his treatment schedule. Near the end of his first semester, however, worsening side-effects made that balance impossible. Williams withdrew from his classes and took a medical leave of absence to finish chemotherapy during the spring semester.

That round of treatments finally eradicated the lymphoma, freeing Williams to return to UVA with a clean bill of health. His intention of studying biology, however, was replaced by a new dream.

“After doing treatment and all of that, I did not really want to study science anymore,” he said.

Instead, Williams turned to art. He had done some art therapy during his treatments and took two drawing classes during his first summer back at UVA. Williams’ drawing instructor, lecturer Elizabeth Schoyer, introduced him to William Bennett, an associate professor of sculpture, and Kevin Everson, a professor of film. He enrolled in both professors’ courses in the fall, and he was hooked.

“I loved the personality of it and the passion that my professors have for it,” he said of his attraction to art. “It was something that I could do to express myself, to talk about things, to investigate the world in a unique way, but still have an impact on the world.”

He also found that art helped him express some of the emotional turmoil that accompanied cancer diagnosis and treatment.

Now, Williams’ portfolio includes a wide range of sculptures, short films and other projects. His inspirations are varied – a conversation with a friend, a question that pops up as he is driving around town or a line from a Franz Kafka novel he read for an English class.

One piece was inspired by the classic philosophy question, “If a tree falls in a forest and no one is around to hear it, does it make a sound?” To illustrate this question, Williams piled his old notebooks, sketchbooks and diaries in a cedar chest and pored molten bronze over the box, sealing it shut.

“If I put these notebooks in a box and seal it shut and no one could read them, do those ideas matter just in their existence?” he wondered. “It plays with objects and people’s understanding of things.”

In giving form to his ideas, Williams has learned range of new skills, from welding steel or bronze casting to building a brick wall. He has also learned the value of partnerships, whether that means calling upon Eric Schmidt, the art department’s gallery and studio technician, to teach him about woodcutting or welding, or reaching out to the Charlottesville community to partner with other artists.

“You find people, you make connections, you build a community around things,” he said. “That has been a great way to learn about Charlottesville, and it was not until I started doing that that I realized what a large, flourishing community Charlottesville has in the art world.”

Williams met many of his collaborators while working as a waiter and host at the C&O Restaurant in downtown Charlottesville; he even formed a band with some of his coworkers. He has also exhibited his work at local galleries and worked with internationally renowned artists who have visited UVA as artists-in-residence, including sculptors Patrick Dougherty and Mark Dion.

Williams, who has been in remission for three years now, will remain at UVA after graduation as a McIntire Department of Art Aunspaugh Fifth-Year Fellow, a position that will provide him with a stipend as he continues to develop his portfolio and launch his career as an artist.

“The fellowship gives you a year to work here, get a studio space and a stipend, and work autonomously to keep building your portfolio,” he said. “I am definitely excited to stay in Charlottesville, and it will be an exciting year, I think.”