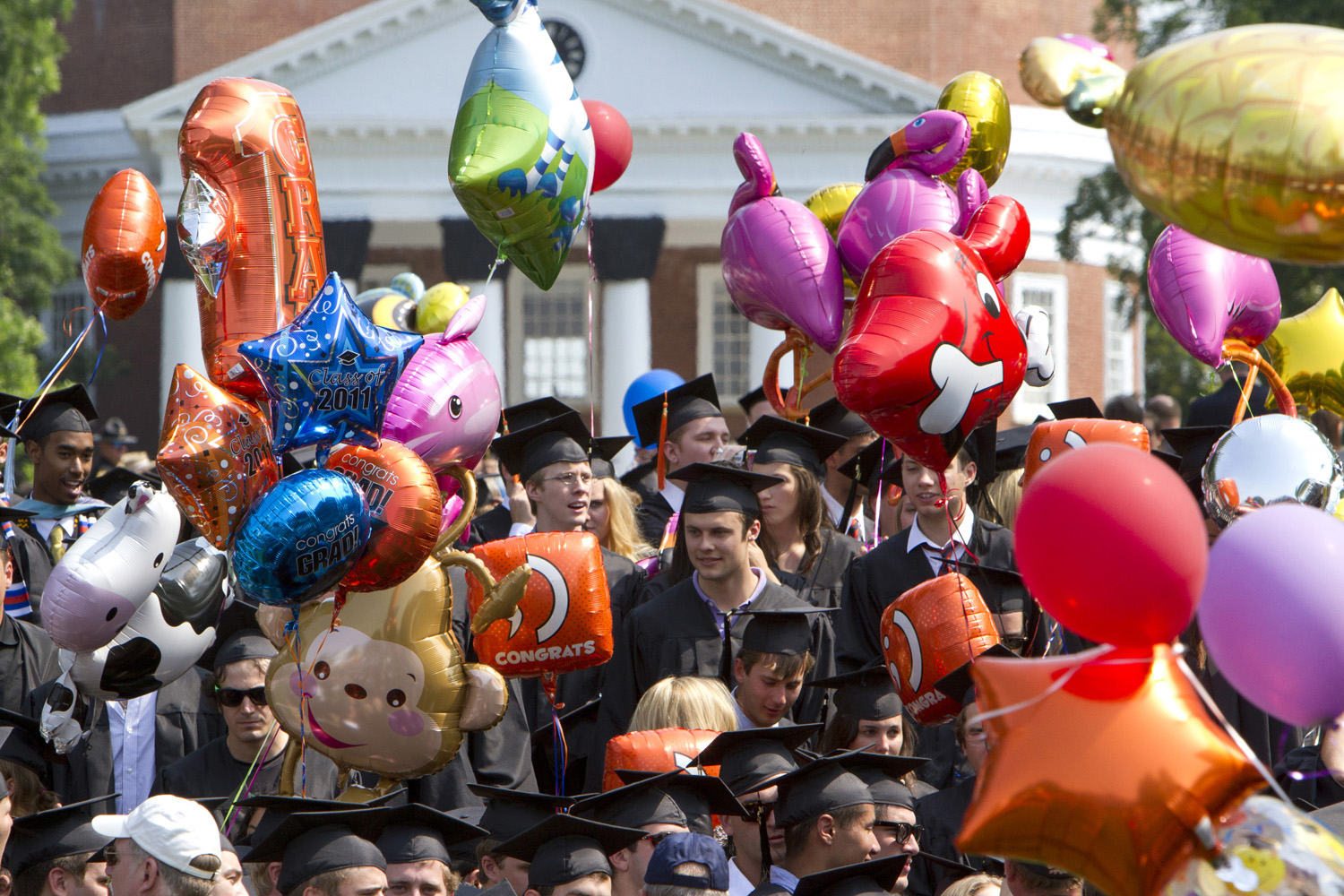 May 22, 2011 — "Daddy! Daddy! Daddy!" the young girls chanted Sunday as their hero walked back up the Lawn toward a dozen or so family members, gathered just outside the shadow of the Rotunda.

Theodore Weston "Ted" Croy III smiled broadly. His graduation gown was accented with an orange-and-blue hood, signifying that he had just been conferred a doctoral degree during the University of Virginia's just-concluded Final Exercises.

Underneath, Croy wore another uniform, signifying the rank of U.S. Army major. As a Ranger, he had done tours of duty in Iraq and Afghanistan – "He's a real hero," a family member, visting from Iowa for the occasion, declared proudly – and the Army paid for three years at U.Va. to allow him to earn a Ph.D. in kinesiology.

In a few weeks, Croy, his wife and three young daughters will be off to San Antonio, Texas to resume his Army career. An officer of the Medical Specialist Corps, he will be training Army physical therapists and continuing to research ankle injuries.

Croy received one of the 6,248 degrees conferred Sunday under skies that were alternately cloudy and clear, with temperatures pushing toward the 80s.

The ritual of Final Exercises remained largely unchanged, though the 182nd edition was the first under the direction of U.Va. President Teresa A. Sullivan, who took office in August. But for the members of the Class of 2011, it was all fresh and new.

Family members arrived as early as 5:15 a.m. to stake out the best seats on the Lawn (first row, on the central aisle, best to spot a passing graduate and have a view of the speakers' platform). At precisely 10 a.m., a fanfare signified the beginning of the procession from the Rotunda to the Lawn's south end, an hour-long, slow-moving, high-spirited current of smiling faces and festive balloons.

Sullivan efficiently conferred the 6,248 degrees, flawlessly reciting "with all the rights and privileges thereunto belonging" in 25 separate pronouncements. The School of Nursing contingent collegially cheered the newly minted doctors from the School of Medicine, who returned the favor a few minutes later. As always, the loudest and most sustained celebration came from the huge contingent earning bachelor's degrees from the College of Arts & Sciences.

Minutes later, a "Godspeed and God bless you" from Sullivan ended the ceremony, triggering the usual chaos of graduates and family members taxing the cell-phone network as they sought to reunite amidst a crowd of 40,000, take a couple of quick photos in front of the Rotunda, then hurry off to diploma ceremonies scattered across Grounds.

While ritual by definition involves a certain familiarity and sameness, it draws meaning by celebrating achievement and reaffirming societal values.

Even as McDonnell acknowledged that his advice to the class of 2011 was "well worn" – "Follow the Golden Rule; do unto others as you'd have them do to you. Help and serve your neighbor. Be kind and generous to others. Take responsibility for others, and make no excuses. Give back to your community, generously. Live today well. Do not worry about tomorrow. … Always vote. Tip well. Never miss the opportunity to enjoy a sunset or a sunrise. And always try to follow the rules of the Boy Scouts and the Girl Scouts; No. 1, be prepared, and No. 2, always try to leave the campground a little better than you found it" – he declared that there was value in repeating it.

"Here's the thing: In a busy and changing world it's sometimes easy to forget the basics," he said. "I'll tell you through my own experience, 35 years since I sat in your seat, if you keep these very simple rules in your heart and practice them even when you are stressed and worn out, and generally annoyed at the world, I can tell you that your life will go well."

Another key to the power of the graduation ritual is that a new class takes part every year. It may have been the 182nd such ceremony for the University, but for the vast majority of the graduates, it was their first.

Marcellus Nixon, 45, of Falls Church, earned a bachelor's degree in interdisciplinary studies from the School of Continuing and Professional Studies. He joined the Army out of high school, then went to work as a network engineer. He eventually enrolled at Northern Virginia Community College, and entered the BIS program in September 2008. He attended classes in Northern Virginia and wrapped up his degree last December.

Six months later, he was happy to make the trip to Charlottesville to make it official. "Now that I have my degree, I kind of feel fortified by having it," he said, adding that the ceremony "was great. It was all that it was advertised to be, and more."

Those members of the class taking a more conventional journey toward their degrees shared four years of common experience since packing their belongings, leaving home and moving into their first-year dorms on a sweltering Saturday in August 2007.

A then-fresh tragedy at Virginia Tech led to the creation of an emergency alert system on Grounds, and to a temporary cease-fire in the rivalry with the Hokies – a state of affairs sadly renewed a few years later with the abduction and subsequent murder of Virginia Tech student Morgan Harrington from a concert at U.Va.'s John Paul Jones Arena.

Violence again rocked the University community in 2010 with the death of student-athlete Yeardley Love, allegedly at the hands of a fellow student, sparking an important dialogue about students' responsibility to one another.

Losing football and men's basketball seasons brought on coaching changes, which though not greatly improving the teams' records, offered hope for future success.

As it has been for generations of students, construction was a constant, with major new buildings like the South Lawn Project, Bavaro Hall, Robertson Hall and the Claude Moore Nursing Education Building opening, and others closing for renovations.

A major economic recession led to a series of budget cuts and tuition increases, though job prospects for this year's graduates appear brighter than for the immediately preceding classes.

There was a continued emphasis on sustainability, and technology continued to evolve at a rapid rate, with iPads nudging aside hard textbooks. Facebook became ubiquitous.

John T. Casteen III stepped down after 20 legendary years as the University's president, giving way to Sullivan, who brought a fresh, personal style to Carr's Hill.

Off Grounds, voters elected the first African-American president in U.S. history, and conflicts continued in the Middle East.

So even as this year's Final Exercises closely resembled those of recent decades, they launched a new class of graduates into the world.

"As graduates of this great university – the University – you are prepared by the board, by this set of officers, by these great faculty, to do great things. So I say to you, do them!" McDonnell exhorted. "You step off the Grounds today with impeccable credentials, quick minds, innovative ideas, great training and boundless opportunities."

By late Sunday afternoon, they were on their way.