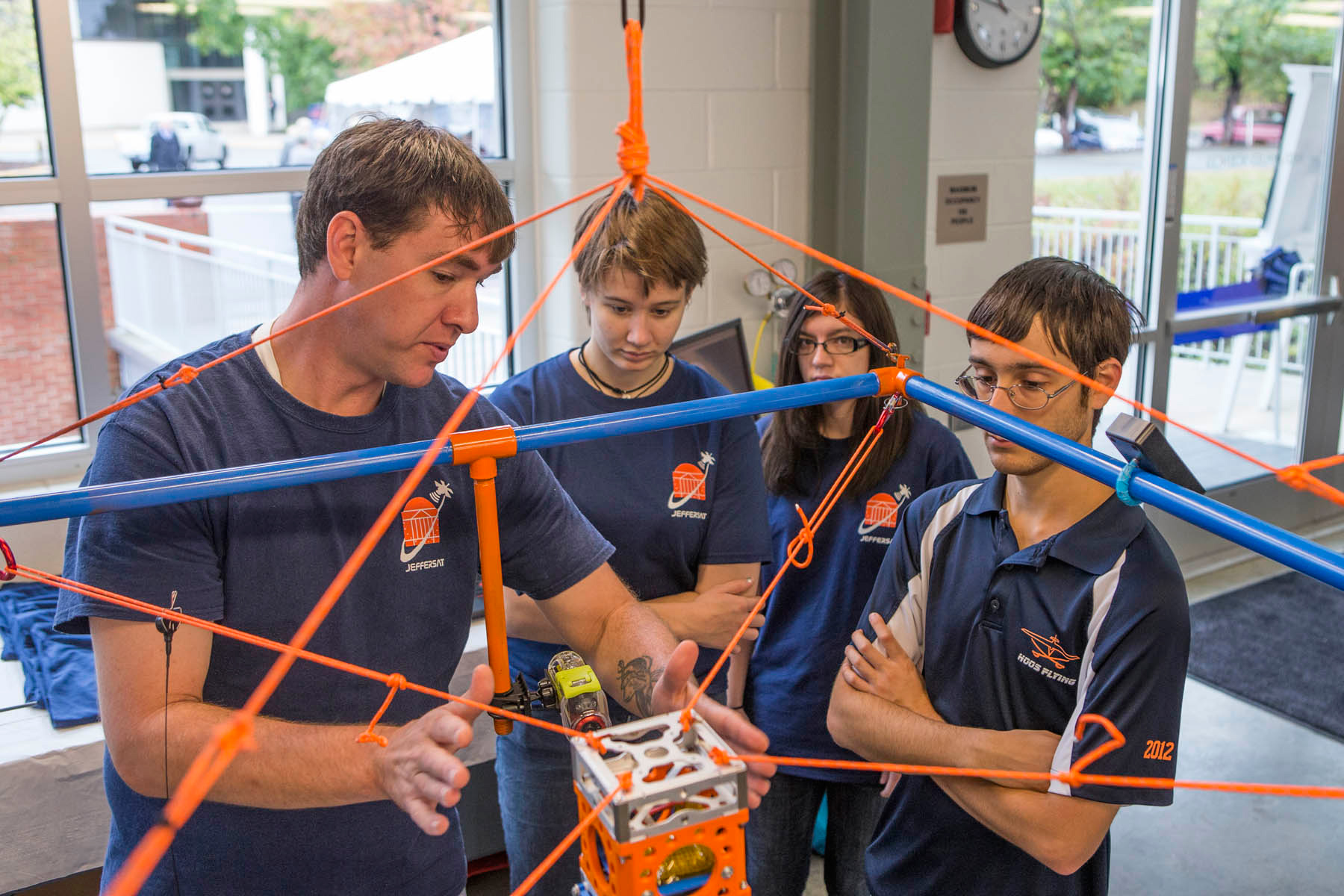 It’s a perfect place for engineering students to get their hands on their work.

Lacy Hall – and the Ann Warrick Lacy Experiential Center that occupies the top two floors of it – was dedicated Friday as a place for students in the University of Virginia’s School of Engineering and Applied Science to gain hands-on experience.

“A growing number of our students participate in ‘experiential learning,’ which is a term to describe the process of creating meaning from direct experience,” Engineering School Dean James Aylor said during the ceremony. “We engineers solve societal problems by applying science and math fundamentals to real-world situations. The skills and abilities needed to do this cannot be learned exclusively in a classroom or from reading a text. They have to be learned firsthand.”

Lacy Hall houses a series of rooms for engineering students to work on projects including experimental cars, airplanes and concrete canoes. The 20,000-square-foot, four-story building was designed and constructed to support the needs of students engaged in experiential learning.

“Before, we had to share a room in the basement of the Mechanical Engineering Building,” said Thomas Lockwood, a fourth-year mechanical engineering student from Beaver Dam. Lockwood and his teammates are designing and building lightweight model airplanes that can carry heavy payloads.

“We had planes broken and we lost one when one of the other people was charging a battery and it started a fire,” Lockwood said, as he stood in a room with model planes dangling from the ceiling and work surfaces cluttered with tools. “It is really nice to have our own space.”

“The students are sensational,” said Linwood A. “Chip” Lacy, Jr., a 1967 chemical engineering graduate and 1969 graduate of the Darden School of Business. Lacy and his wife, Connie, a 1966 graduate of the School of Nursing, are donors to the building that is named after his parents, Linwood A. “Bub” Lacy and Ann Warrick Lacy. The senior Lacy left the University before graduation to be a World War II fighter pilot. After the war, he returned home to Charlottesville and joined his father’s mechanical contracting business, L.A. Lacy Plumbing and Heating.

Lacy was one of several speakers at Friday’s dedication and ribbon-cutting, an event that included University President Teresa A. Sullivan, Board of Visitors member Stephen Long and Aylor. Engineering alumnus Robert “Bo” Jones and current engineering student Andrew Jordan also addressed a crowd of about 100.

The rain held off during the ceremony, part held in a white tent, part under a slate-grey sky. Jones, who started his time at U.Va. as a 30-year-old third-year student, lauded Lacy’s effort to give students a chance to experience their education.

“I learn through my fingers and my eyes,” said Jones, who credited his work on the Mini-Baja, a car design-and-build team, for his current job as a test driver.

“A lot of students don’t really understand why they want to be mechanical engineers,” he said. “They don’t understand yet how awesome engineering can be.”

“The decisions the student makes here are guided by the fundamentals they learn in the classroom,” he said.

Inside the building, students demonstrated some of their work.

Fourth-year mechanical engineering student David Griggs was applying some basic materials science classroom learning with very hands-on work – tuning a steel drum with a ballpeen hammer. The St. Louis native said the nature of a musical note from a particular spot on the drum was the result of the tension on the metal, tension he could create by flattening a spot with a hammer. But it was not like simply tightening a guitar string. Tuning with a hammer can be imprecise.

“There are a lot of factors,” he said. “I can hit it here and change three things.”

Griggs’ experimentation is giving him a better understanding of working with high-carbon steel. As an engineer, he wants to work in computer-assisted design. As a musician, he has taken up the handpan, a melodic curved-steel instrument played by tapping it with the fingers. He can foresee a sideline job making them, a task for which his current experimenting would be invaluable.

Mechanical and aerospace engineering graduate student Stephen Jamison is using “smart telephone” technology in an operational low-orbit mini-satellite. Jamison is part of a team that has submitted a proposal to the National Aeronautics and Science Administration to include its experiment on a future mission.

“We had no place to work on this last year,” said Jamison, who had been on the team as an undergraduate.

In his remarks, Board of Visitors member Long said, “I’m certain that Thomas Jefferson would have been delighted to gather with students and researchers here in one of Lacy Hall’s flexible spaces, discussing how various systems work, sketching out new ideas, building and creating new technologies and imagining new possibilities.”

Sullivan noted that a primary theme of the University’s strategic planning process is to provide educational experiences that deliver new levels of student engagement.

Lacy Hall also opens other possibilities for students to work with professional staff. The building’s first and second floors are dedicated to operations of Facilities Management, including its information technology services and its cabinet shop.

“This opens opportunities for collaboration between our craftsmen and the engineering students,” said Jay Klingel, director of operations and maintenance for Facilities Maintenance.

A Year We Will Never Forget: 2019-20 in Review END_OF_DOCUMENT_TOKEN_TO_BE_REPLACED

‘What Will You Carry With You?’ Remarks From UVA President Jim Ryan END_OF_DOCUMENT_TOKEN_TO_BE_REPLACED