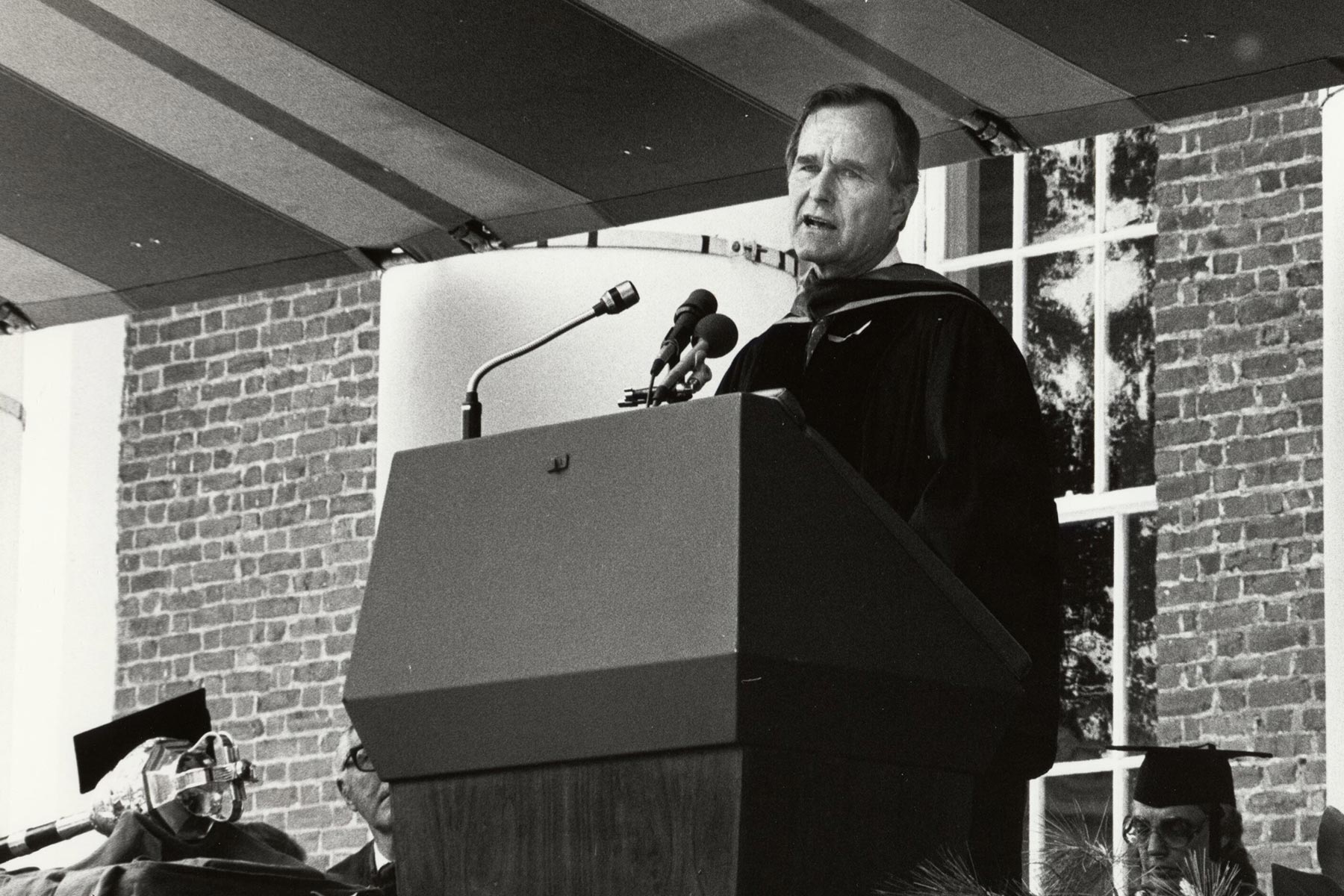 In building an oral history of George H.W. Bush’s presidency, scholars at the University of Virginia’s Miller Center interviewed dozens of top aides and staffers who worked directly for the 41st president.

Their memories provide firsthand insight as the nation gathers this week to mourn Bush, who died Friday at age 94, and to commemorate his service to the country as a Navy pilot, congressman, ambassador, CIA director, vice president and, finally, as president. Aides described their boss as honorable, compassionate and so respectful of the position that he refused to enter the Oval Office wearing anything less than a coat and tie.

These interviews are one sliver of the Miller Center’s broad Presidential Oral History program, which has completed oral histories for presidents Jimmy Carter, Ronald Reagan, Bush, Bill Clinton and Bush’s son, George W. Bush. The interviews, tapes and transcripts provide a thorough, detailed look at each administration and are a valuable repository for UVA scholars and students and for researchers around the globe.

On German Reunification and the End of the Cold War

The reunification of East and West Germany was one of the major foreign policy accomplishments of Bush’s presidency, easing decades of Cold War tension. Aides recalled Bush’s tenacity and diplomatic skill in pushing for reunification, as well as his decision not to go to Berlin when the Berlin Wall fell, which earned him some criticism but also, as Timothy McBride points out, allowed Soviet leader Mikhail Gorbachev to save face.

“There was a great deal of pressure on the president to get on Air Force One and fly to Europe and take credit on behalf of 40 years of U.S. policy, and on behalf of America, our role in conquering the evil East. George Bush resisted that, and was criticized greatly on the Hill, on both sides of the aisle. Where’s our president? Why isn’t he there? He understood that if he had done that, he would have provoked a different response from Gorbachev. He understood about, how do we help Gorbachev save face and unwind this thing in a way that is responsible and doesn’t require him to get his back up, doesn’t push him up against a wall and invite some response other than a peaceful unwind of this thing? It was challenging inside the White House even among his own aides, who may or may not have admitted to telling him at the time, ‘You need to get over there. You need to take credit for this.’ But he understood differently.”

Gates: “I think in all of the events of the Bush administration from the end of the Cold War, the collapse of the Soviet Union, liberation of Eastern Europe, reunification of Germany, to the Gulf War, that Bush’s personal diplomacy played a huge role in all of them in many ways and with greater or lesser importance in specific circumstances. But he had an unerring instinct for when it was time to reach out to somebody and talk to them on the phone. No president, I think, has ever engaged in the kind of telephone diplomacy that Bush did.”

Bush signed the North American Free Trade Agreement, or NAFTA, into law in December 1992, creating a free trade alliance between the United States, Mexico and Canada. The agreement went into effect under Bush’s successor, Bill Clinton, in 1993. Though we do not have audio for this particular quote, Michael Boskin, chief of the Council of Economic Advisors under Bush, described the late president’s approach to the deal and its impact on Mexico as follows.

Michael Boskin: Chief of the Council of Economic Advisors

“President Bush clearly had something even bigger in mind; he wanted better relations with Mexico. He thought this would be good for Mexico’s economy, it would be on balance good for our economy, but since their economy was 4 percent of our economy in size, it was going to be a small deal for our economy, a small positive, with some losses and larger gains. For them it would be very big and very important. Not just for their economy, very important symbolically that we were going to treat them as a partner. And I think he was quite right in that.”

Aides proudly described Bush as a man of integrity who treated subordinates with great respect, worked hard and was not afraid of taking on difficult, politically dangerous tasks.

“People I talked to – even people who were upset with George Bush at the time and didn’t vote for him – think very well of him now, because in retrospect they think he was a man of honor, and a man of character, and a man they were actually proud to have as president of the United States, as frustrated as some of them may have been with his policies at times.”

Sigmund Rogich: Assistant to the President, Ambassador to Iceland

“The most significant thing I always found about him was that he had a great affinity for people’s feelings. I never, ever, saw him dress anyone down, from an advance person who might have made a flub-up – and he knew it – to a senior staffer who screwed up. He might roll his eyes a little bit, but he was very conscious of the fact that there is a human side to everybody and it’s fragile. I think that was the most impressive thing I always saw, his care about other people and their feelings.”

“One of the great things about being part of the Bush Administration was just the unique quality of the man who was running the show. If you were to go out and design a president to be commander-in-chief in a crisis like Desert Storm, you couldn’t do any better than what we had with George Bush. In terms of his experiences, combat pilot in World War II, UN, China, CIA, vice president. He was a delight to work for in that regard. So a lot of what followed after that, whatever successes we enjoyed and so forth, you have to start with the man. He’s the guy who got elected; he’s the guy who hired all of us. He was the one who gets the credit and the blame if it doesn’t go right. I can’t say enough about his own capacity, the way he worked, the guidance he gave us, the support he gave us when we had to do some very difficult things, some politically difficult things. Never hesitated and signed right up to.”

On His Reverence for the Presidency

Bush aide Barbara Kilberg offered a memorable anecdote about the late president’s respect for the office he held. Kilberg needed a document from the president and asked him about it while he was on the tennis court. He went back to the Oval Office to retrieve the document, but before going in, changed out of his tennis clothes and into a coat and tie, because, according to Kilberg, he would only enter the office in what he deemed appropriately respectful attire.

Barbara Kilberg: Deputy Assistant to the President for Public Liaison, Director of the White House Office of Intergovernmental Affairs

“One time I had something I needed to know and Tim [McBride] said to me, “Well, just go down, the president’s at the tennis court.” So I went down and he said, “Oh, yes, that paper’s on my desk.” I said, “Well, OK, I’ll tell Tim and we’ll get it.” And he said, “No, no, you guys won’t know where it is, I’ll go get it. Come on, the game is over.” So we started to walk back up – the tennis courts are on the South Lawn. We started walking up I thought toward the Oval Office, in which case you’d go this way. And he said, “Where are you going?” and I said, “I’m going to your office.” “No, no,” he said, “I’m in tennis shorts.” I said, “So?” He said, “No, just wait, I’ll be back.” So he went into the residence, got dressed, put on a coat and tie, walked into the Oval Office, handed me the paper, and left. But he would not go into that office in tennis togs. He didn’t believe that was appropriate. He had such a sense of respect for the physical room as a symbol of the presidency.”

On His Approach to Legislation

Kilberg also recounted how Bush researched his legislative priorities and dealt with different interest groups. Here, she remembers how he approached revisions to the Clean Air Act.

“This president came in with the very strong feeling that he wanted to listen to what everybody had to say; that if you cared enough to organize yourself as an interest group you probably had something intelligent to say about a topic. And that if he only listened to people he agreed with, he was never going to grow. He was a voracious reader of public policy. … [A] perfect example [was] when he challenged Roger Smith from General Motors and knew more about CO2 emissions and SOx [sulfur oxides] and NOx [nitrogen oxides] than Roger Smith did. I said, “Where the heck did that come from?” because it wasn’t in that particular briefing paper. But he just said, “I have been vice president for eight years, thank you very much. I do read.” But he really wanted to open up the process to people he didn’t always agree with. So on Clean Air, he talked to the auto companies and the economists, but he also talked to the environmentalist groups, he talked to the union groups, he talked to the consumer groups, but the Reagan people didn’t really view it that way. So when we came in [to build our staff] we were looking for people who shared that feeling and that view about being inclusive.”