In Her Own Major Event, Pam Higgins Is Honored for Her Years of Service to UVA 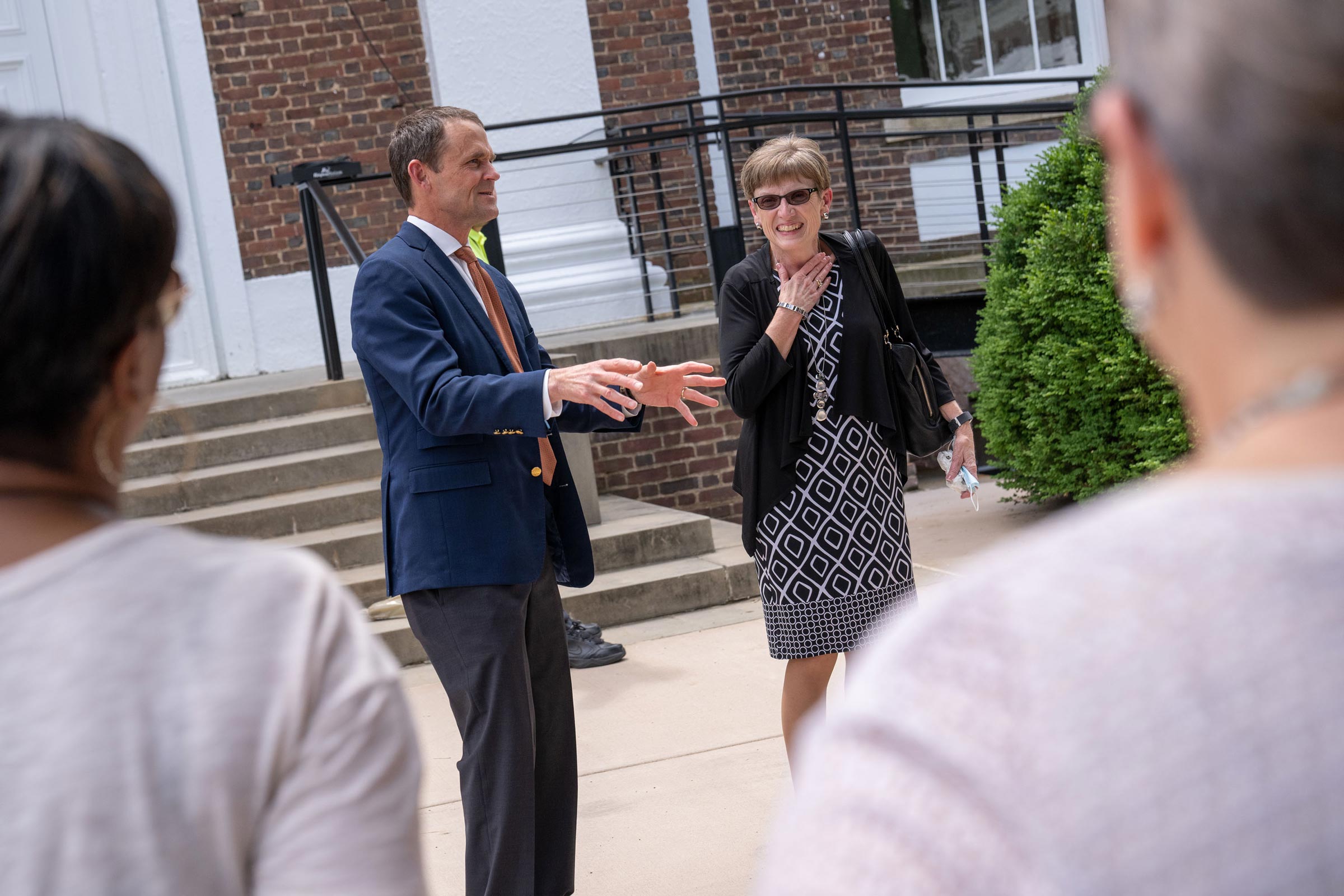 University President Jim Ryan explains to Pam Higgins that her friends and co-workers were gathered in her honor. (Photo by Sanjay Suchak, University Communications)

Pamela Higgins, who for decades has quietly planned activities on Grounds as the director of the University of Virginia’s Office of Major Events, was herself the center of attention Thursday.

A crowd of people, including University President Emerita Teresa Sullivan and former Executive Vice President and Chief Operating Officer Leonard W. Sandridge, clustered in front of Old Cabell Hall, trying to look inconspicuous. When Higgins, who had been told she had a 1 p.m. meeting, came into sight, the crowd erupted into applause.

University President Jim Ryan greeted Higgins saying, “Pam Higgins, this is your life. The only thing that makes me nervous is that you didn’t plan this.”

Higgins, visibly surprised by the gathering, laughed and greeted several individuals in the crowd.

“Pam, what you do every year is mind-blowing, the level of detail and planning that goes into this special weekend – and what you did last year with seven ceremonies – the stuff of legends,” Ryan said. “And so, with just two more to go, many of us wanted to commemorate and recognize you in a special way – not just for what you’ve done this year, but your whole career at UVA, close to five decades of time here on Grounds.”

The president calculated that Higgins has masterminded 44 Final Exercises ceremonies, including seven held over two weekends in 2021, and the virtual Final Exercises held in 2020.

Then Ryan unveiled a plaque dedicating the graduation stage to Higgins. 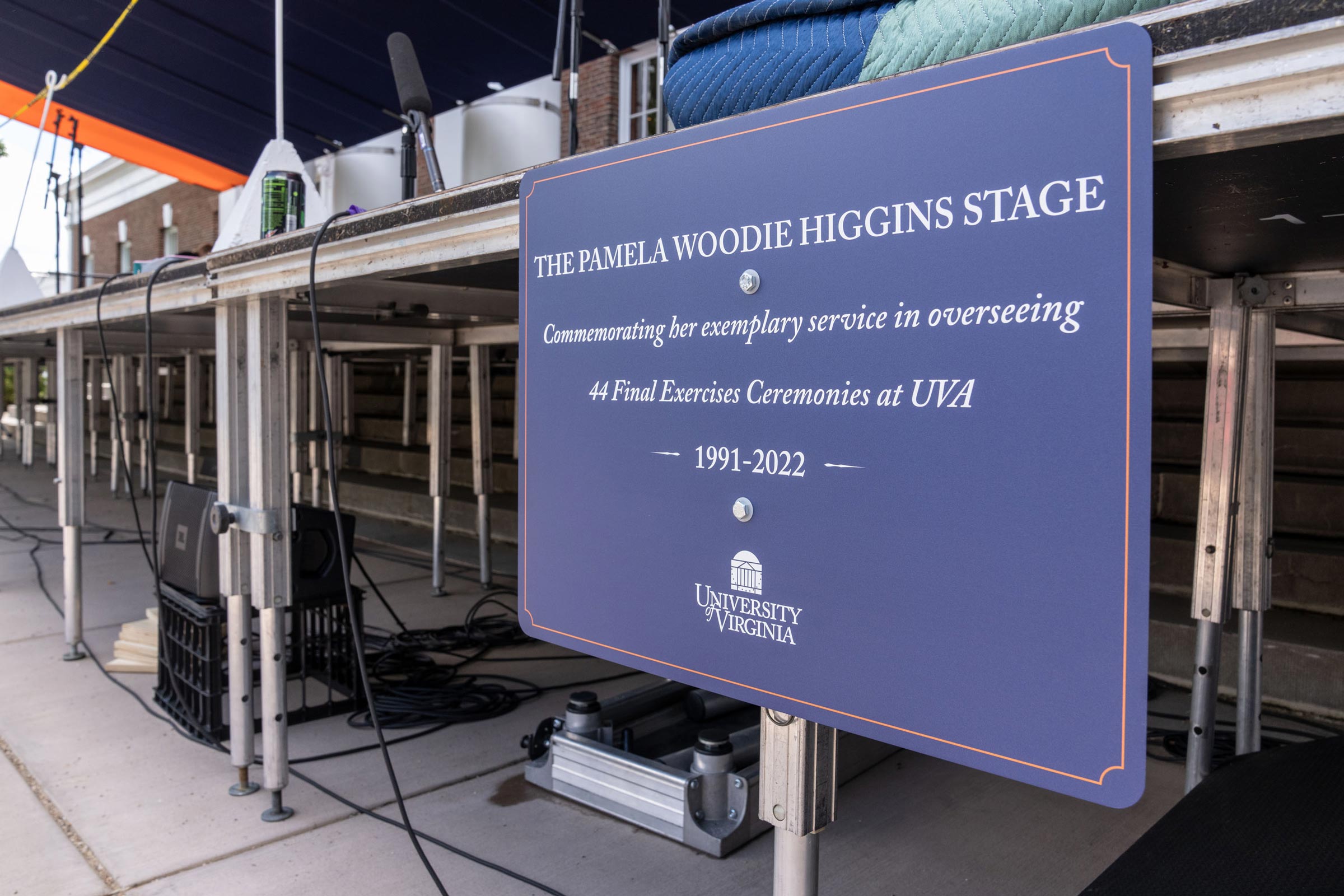 The stage used for graduation has been dedicated to Pam Higgins, director of the Office of Major Events. (Photo by Sanjay Suchak, University Communications)

“I can’t think of anyone who has had more of an impact or legacy on this important tradition than you,” Ryan said. “And so, we thought it appropriate, that each year at every Final Exercises, students would walk the Lawn in the direction of the newly dedicated Pamela Woodie Higgins Stage. The plaque will hang up each year the stage is installed and be a reminder to us all of your impact and service to the important major events that happen on this stage.”

After the unveiling, two cans of diet Mountain Dew soda, her favorite, were presented to Ryan and Higgins on a silver salver.

“I’ve been living on this for the past two weeks,” Higgins said with a laugh as she savored a drink.

“I couldn’t do this job without all of you,” she said to the assembled crowd that featured representatives from many University departments.

Ryan also presented Higgins with a bouquet of flowers.

The magic of the Office of Major Events is being central to occurrences on Grounds without leaving any fingerprints. Events are meant to unfold flawlessly after months of invisible preparations. Central to that magic is Higgins, who has prepared her final Finals.

Higgins, who is retiring in January, has led the Office of Major Events for 31 years, coordinating high-profile annual events such as Final Exercises, Founder’s Day and Fall Convocation, as well as numerous smaller occasions, including hosting visiting dignitaries, overseeing the president’s box at sporting events and organizing building dedications.

Higgins and her office coordinated Gov. Doug Wilder’s economic summit with the presidents of the Central American countries and the governors of the 15 Southern states; Thomas Jefferson’s 250th birthday celebration, which included visits by Soviet leader Mikhail Gorbachev and newspaper columnist and author George Will; a visit by Emperor Akihito and Empress Michiko of Japan; and an Olympic torch relay.

Higgins was also an integral part of the University’s bicentennial celebration, the inaugurations of University presidents Sullivan and Ryan, and the first public address of Secretary of State John Kerry at Old Cabell Hall in 2013. 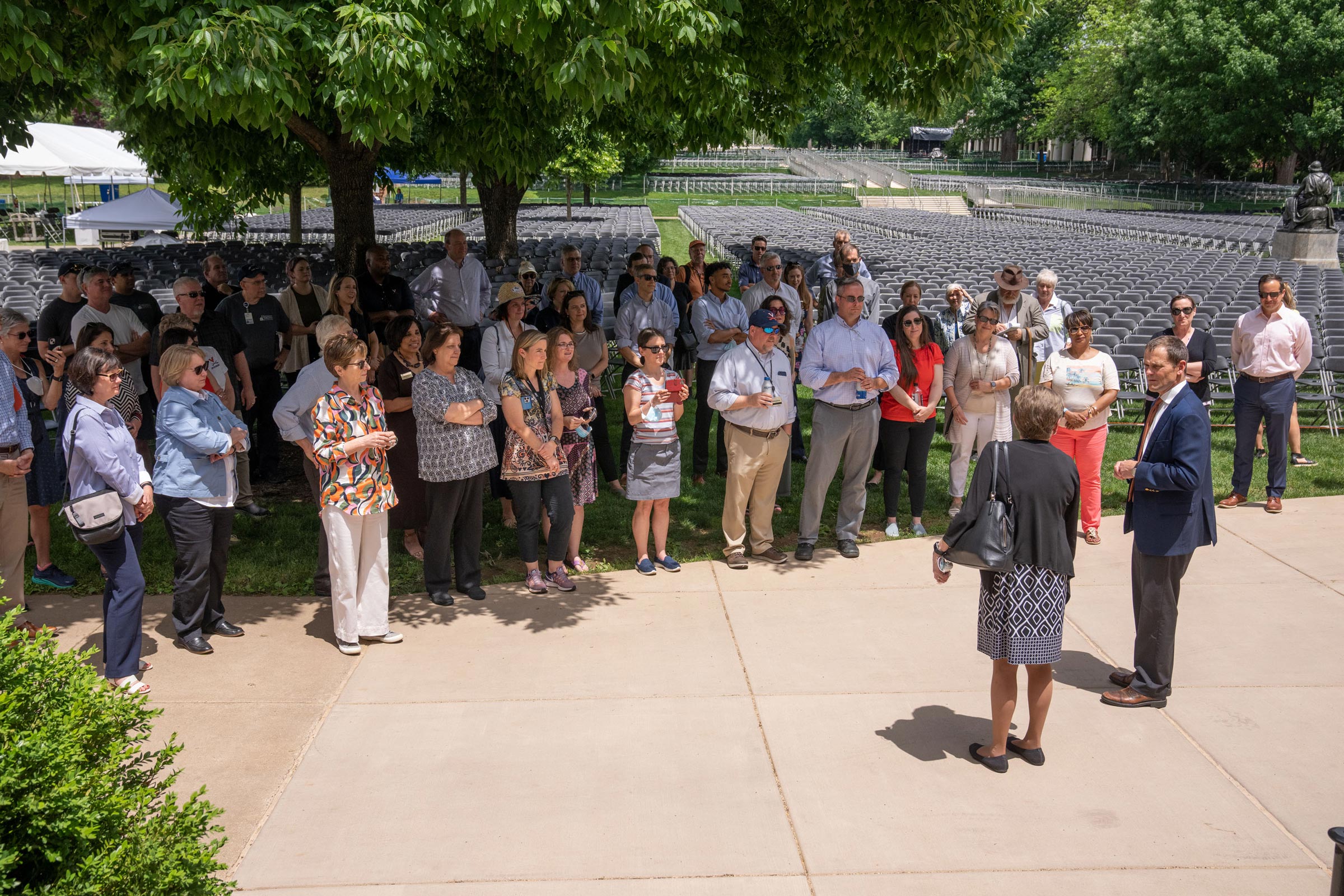 A crowd of people gathered in front of Old Cabell Hall Thursday for the dedication of the Final Exercises stage to Pam Higgins. (Photo by Sanjay Suchak, University Communications)

Higgins works with many other University departments, including the Office of the President, Facilities Management, Parking and Transportation, and University Police, but also outside agencies such as the U.S. Secret Service, the Virginia Governor’s Office, the Chamber of Commerce and the U.S. State Department.

Higgins has always been a Hoo at heart. She graduated from the University with a bachelor’s degree in psychology.