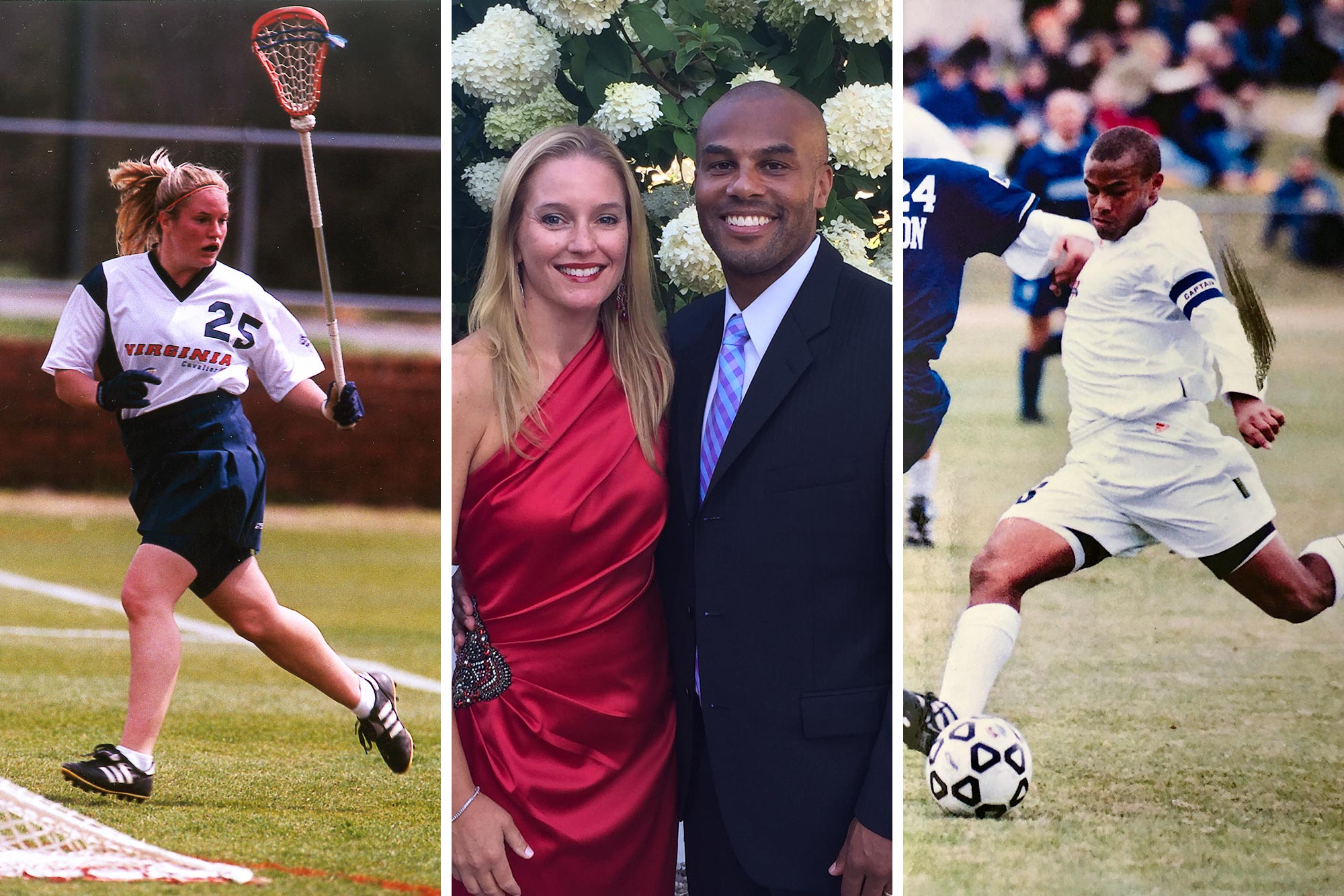 Dr. Marshall Leonard has the routine down.

Every day, after he has treated countless coronavirus patients at a New York hospital, he calls his wife, Courtney, just as he is about to drive home.

Courtney makes sure that the couple’s three daughters, ages 11, 8 and 5, aren’t around when he returns, shooing them up to bed or some other part of the house where she knows they can’t spontaneously run out to give their dad a hug or a kiss.

When Marshall pulls in, he leaves his bag and other personal belongings in his truck. In the garage, he strips completely naked, places his clothes outside the house and walks upstairs to take a long, hot shower.

“I don’t know if it helps or not,” said Marshall, a doctor at North Shore Manhasset Hospital, about 17 miles from New York City, “but it makes me feel like I’m at least doing something.” 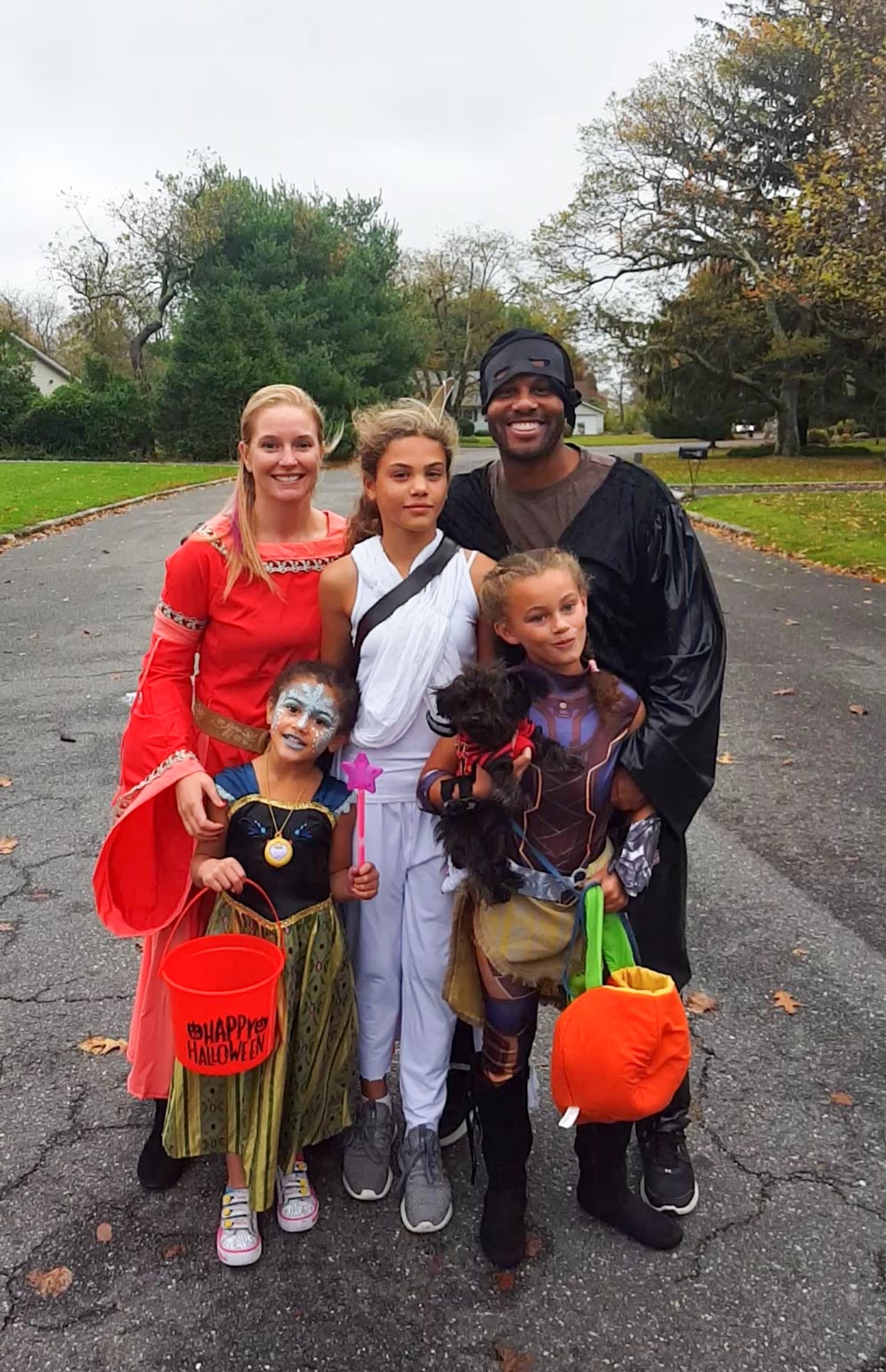 Nearly 20 years ago, Marshall Leonard was the anchor of a University of Virginia men’s soccer team’s defense that didn’t allow a goal for an entire Atlantic Coast Conference season. Now, with the help of Courtney – a defensive stalwart in her own right for the UVA women’s lacrosse team – he is playing a much different kind of defense, one in which there is zero room for error.

“As doctors in the emergency department, we have definitely seen death before,” Marshall said. “The difficult part about this right now is that people are dying unexpectedly from the virus and we really can’t do anything about it.

“Even patients who were looking pretty good with us in the emergency department, three days later something ends up happening and they succumb to the virus. It’s tough.

“But the opposite occurs as well. There are people who have gotten better and have been able to leave the hospital, too.”

One of four children, Marshall Leonard was born in El Paso, Texas. His father, Tommy, was a colonel in the Army who would go on to become a neonatologist; his mother, Kathleen, was a schoolteacher.

The Leonards moved around a lot before finally settling in Columbus, Georgia. A standout in soccer, Marshall picked UVA over a host of ACC schools who had been recruiting him.

UVA head coach George Gelnovatch vividly recalls visiting the Leonards during the recruiting process. “You could right away tell how educated the family was, how much they believed in education and the character of the family,” he said.

At UVA, Marshall, who majored in African American and African studies, was part of an incredible 2001 team that didn’t allow a goal for an entire ACC season.

“I remember the big hug we had after the Duke game,” said Gelnovatch, referring to a 1-0, late-season overtime win over the Blue Devils. “Being a defender, you take a lot of pride in shutouts. I think he took a lot of pride in that. That’s hard to do. That will be a record that doesn’t get broken.”

“When you think about the people who you want on the front lines of fighting this virus that nobody has ever seen before, he’s the guy,” Gelnovatch said. “With his character, his intelligence, his drive, his caring about people – he’s the guy. He’s just a special guy.”

The daughter of a businessman and a special needs reading teacher, the former Courtney Muller grew up on the north shore of Long Island in Smithtown, New York, where she starred in soccer and lacrosse. 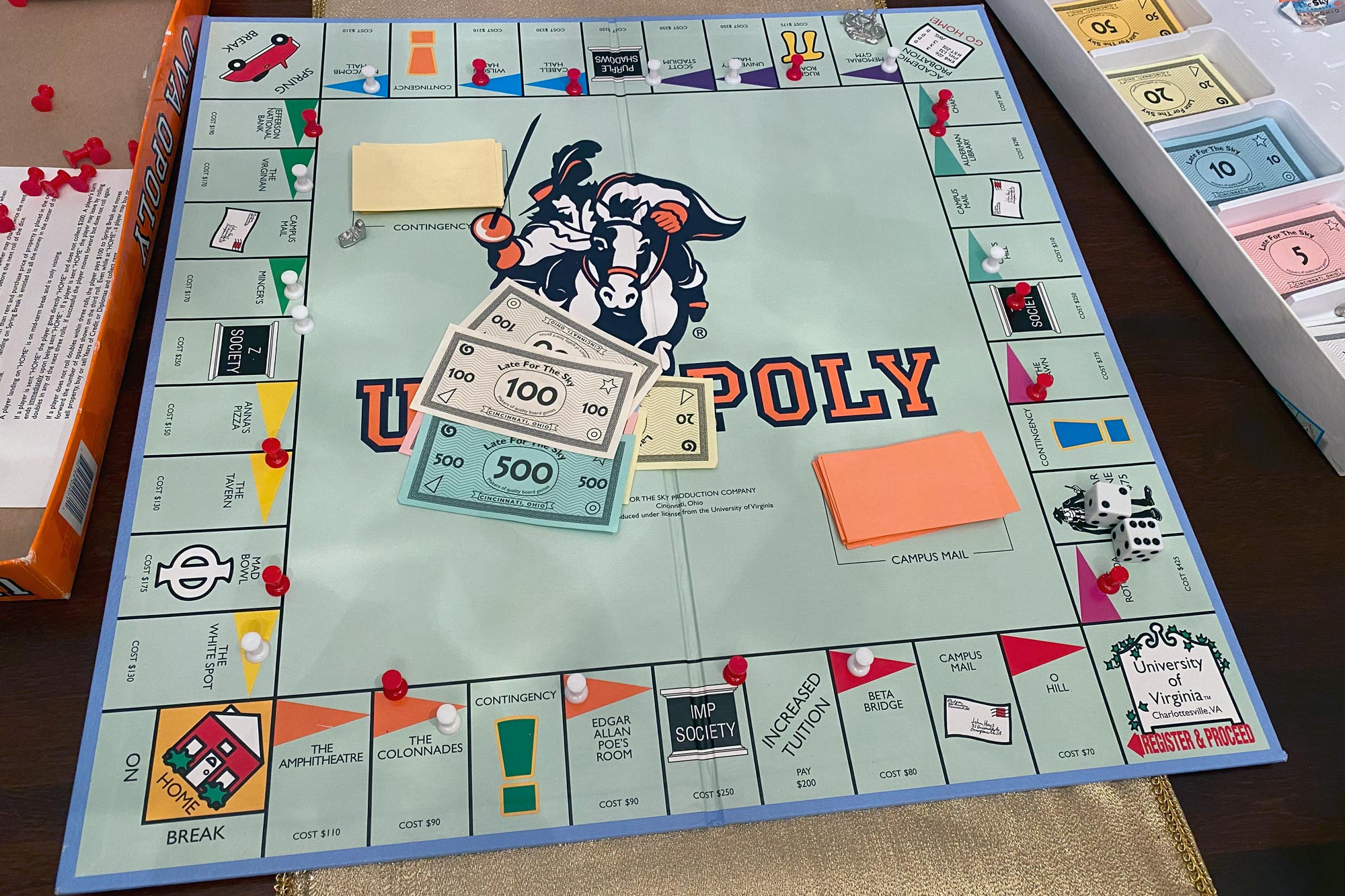 Despite it being more than two decades ago, UVA women’s lacrosse head coach Julie Myers – like Gelnovatch – also remembers her in-home recruiting visit well. It was one that featured Courtney’s parents – and grandmother.

“To see three generations under one roof and how connected they were as a family was a really cool first impression,” Myers said. “They were an unbelievably kind and open and generous family.”

Marshall and Courtney met at UVA in 2000, during their third and second years, respectively. They were introduced through Marshall’s roommate, who had become friends with members of the women’s lacrosse team.

“The two of them would come and watch Kelsey so that I could go to the grocery store,” Myers recalled. “I was like, ‘Courtney, are you bringing your boyfriend to my house?’ She would be like, ‘Oh no, we’re just really good friends.’”

On the field, Courtney developed into one of the team’s best defenders. Unfortunately, by the end of her career, she was hampered by a leg injury that didn’t allow her to practice as much as she would have liked.

“She was in a lot of pain,” Myers said, “but still smiled and worked her butt off every step of the way and never complained.”

Myers said Courtney and Marshall were fun to be around.

“They both had the most amazing smiles and Kelsey would just light up when Marshall came in the door,” Myers said. “At that point, I was like, ‘Courtney, I hope that Marshall is your boyfriend because he is just so awesome.’ And Courtney was so awesome. Family is so important to her. I think they both hit a jackpot.”

After playing seven years in Major League Soccer for the New England Revolution, Marshall – despite the fact he had been out of school for such a long time and hadn’t taken the required pre-med courses – decided he wanted to become a doctor.

Subsequently, he took the courses through a post-baccalaureate program, then went on to medical school at Stony Brook University, completing his residency in emergency medicine in June 2019.

“I had always had an interest and kind of a curiosity in how the human body works,” Marshall said. “I entered UVA on the pre-med track my first year, but I stopped taking the courses because I knew I had a chance to play soccer professionally. I made a decision I wanted to do that first, and then if there was an opportunity to come back, then I would.

“I didn’t really think I was going to, but over periods of time when I was playing and began thinking about what I was going to do the rest of my life, I decided to kind of take the jump in the pool.”

A sociology major at UVA, Courtney – who got her master’s degree in education from Boston University – went into a career in teaching and coaching. She taught middle school physical education and coached soccer and lacrosse in Boston, and was also an assistant coach for the Boston College women’s lacrosse team for a year.

“We have such fond memories,” Courtney said. “We root for every team every chance we get. Last year, winning the basketball national championship … It’s been fun for us to bring our children into the UVA world.

“Each year that goes by, I love it even more, if that’s possible.”

“Courtney and I always talk about it – the University will always feel like home,” Marshall said. “We’ve developed really tight friendships from our time at UVA. To this day, we talk to a majority of the people who we spent time with at UVA. I think those are things that we can hold onto during this time.”

Marshall Leonard was the 1st person I met on my recruiting trip to @UVA and has been a big brother and role model ever since. Not surprised to see him on the front lines helping others.

Prayers up for him and all the other heroes helping our country recover from this pandemic. https://t.co/3HSx91uG4W

During the quarantine, the Leonards, like many parents around the world, have been in a constant search for activities for their kids. To that end, they finally cracked open the “UVA-opoly” board game that had been collecting dust for years.

“Every little space [on the board] has all the different things around Grounds and it brings back memories very quickly,” Marshall said.  “They have Beta Bridge, Newcomb Hall, the McCue Center. … We always reminisce.”

“They’re like, ‘Hurry up!’” Courtney said, laughing, “because we keep landing on things and reminiscing and telling stories about what we landed on.

“When I landed on the White Spot, I was trying to explain to my oldest daughter about the burger with the fried egg on it and she was like, ‘What?’”

On the Front Lines

Since finishing his residency, Marshall had started spending half of his time doing specialty training in sports medicine.

However, in the wake of COVID-19, his hospital – as you would expect – has had an all-hands-on-deck approach, and Marshall has mainly been treating coronavirus patients.

While on duty, Marshall wears an N-95 mask, plus another mask and plastic face shield on top, along with a hat, gown and two pairs of gloves.

When it comes to his day-to-day duties, there have been many challenges, but Marshall said one of the toughest has been telling family members of coronavirus patients that they can’t visit.

“Sometimes that’s the last time these families are able to see their loved ones,” he said.

Overall, Marshall said the situation can be frustrating.

“We’re still trying to find the best way to solve the problem and treat the patient,” he said. “Sometimes it’s easier if there’s a big trauma and you go to the surgery and take care of it and they get better. But this … we still don’t have a real solution or remedy to the sickness. We basically just watch and wait and treat as much as we can until their bodies recover.

“It’s difficult for us, for sure.”

We're incredibly thankful for Dr. Marshall Leonard (#NERevs alum) and the impact he's making in the battle against COVID-19. @TaylorTwellman spoke with his former teammate on @OTLonESPN about his first week on the job in an NYC area pic.twitter.com/uhSvvzUezF

Marshall, whose parents, as well as his 102-year-old grandmother, now live in Houston, said his children provide constant inspiration. His oldest daughter, Aliya, recently enlisted younger sisters Jada and Nadia for a project.

“They draw these little hearts on our door for all the health care providers,” he said.

Marshall calls Courtney his “rock.” She takes care of the kids when he is working late hours and helps him through whatever issues he’s facing.

Courtney, whose parents, Robert and Angela Muller, are currently sheltering in Florida, said the crisis has brought everyone in their close-knit Long Island community – from health care workers to policeman, firemen, schoolteachers and coaches like herself – closer together.

“It’s kind of corny, but to make a sports analogy, it’s like we’re all on the same team right now,” she said. “Everybody is coming together. It feels like we’re all in this together. Everyone has a common goal right now – to keep as many people as we can healthy and safe.

Of course, Courtney said she still worries about Marshall.

“It’s hard, because he is intubating people and I know how close you have to be to do that,” she said. “It’s very hard with the children as well because you have to explain to them that we’re all staying away from people because of this virus and then one says, ‘Why is Daddy going around everybody?’ When you bring children into the picture, it’s difficult because their worry carries into our worry.

“So it’s kind of a balancing act of trying to stay comfortable in a situation where you know he is at risk, but you also know that he’s helping so many people.”