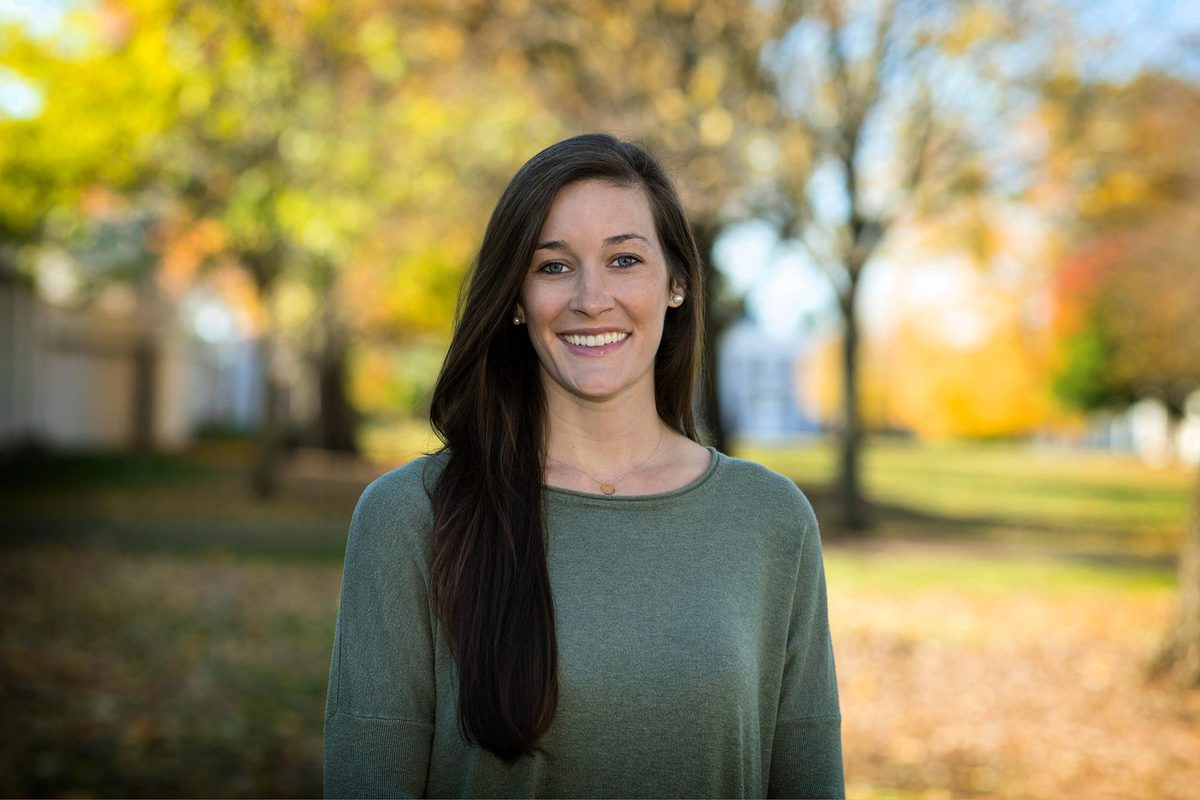 The NCAA basketball season runs from the fall through the spring. The Korea Baseball Organization season goes from the spring until the fall.

For ESPN broadcaster Chelsea Wilson and her husband, Tyler, this is – as far as scheduling goes – downright utopian.

Wilson, who excelled on the basketball court for the University of Virginia from 2008 to 2012 – she was Chelsea Shine then – worked at the Virginia Athletics Foundation until the fall of 2016. That’s when she stepped away from fundraising to spend more time with Tyler while continuing to pursue her basketball broadcasting career.

In August of 2018, Chelsea and Tyler – himself a former UVA baseball pitcher who played for the Baltimore Orioles – welcomed twin boys, Brady and Max.

That’s when things really got interesting.

By this point, Tyler was playing professionally in Korea, where he has played since.

How do the former Hoos – who began dating toward the end of their careers at UVA after meeting through their involvement in the Fellowship of Christian Athletes – make it work?

UVA Today caught up with Wilson – who still uses her maiden name of Shine when she’s on TV – to find out.

Q. What’s it been like trying to juggle your time between your broadcasting career and raising 1-year-old twins while living part of the year abroad?

A. The first season that we went to Korea, two years ago, I was pregnant at the time. I was able to transition over there with Tyler and get acclimated before the babies were born. And then they were born over there right at the end of the season.

When we came back, it was really sort of me having to figure out, “Could I take this on again and still be able to do broadcasting?” But I think I recognized that I probably would have regretted not committing and not doing it. And so last year was the first year that I really got back into it with having kids and I’m really thankful that I did. It was a lot of fun and affirming to have something that I loved that I still got to do.

And now we balance it well with how perfectly the [sports] seasons time out. By the time I get to Korea, college hoops is over and I’m able to be fully present with him. It’s worked out very well. We’re very thankful for the way the past few years have shaken out with those opportunities.

Q. What do you love so much about broadcasting that made you want to push through?

A. I think it was just something I was really passionate about. I never really knew what I wanted to do when I was in college. I was a sociology major and knew I liked working with people and was trying to figure things out. Then I interned with Jay James at WINA 1070 [in Charlottesville] my fourth year. That’s when I got into the media side of things and then TV took off after that.

I love that I get to stay involved in the women’s game. People ask if I ever wanted to play after college and, to be honest, I never had the passion or deep desire to go and play overseas or the WNBA. I look at my husband every single day and I’m like, “I could never do what you do.”

So, for me, broadcasting was just such a fun way to get to stay around the game, in the game – in a different way than playing it, but in a way that I still got enjoyment out of. Q. You’ve had the chance to broadcast some UVA games, including a couple of men’s games, the last few years. Has it been tough being impartial?

A. The year after I graduated, I got a UVA women’s game against Maryland, who was still in the conference and ranked something like No. 6 in the country at the time. It was my first time calling a Virginia women’s game. I had played with some of the players who were still on the team. I remember thinking, “Oh my gosh!” and being really nervous and worried about that. I wanted to make sure I wasn’t partial-sounding in any way and was worried that would be really difficult.

But to be completely honest, it was like the second the game started, you’re just calling the game. You’re calling it as you see it. UVA ended up upsetting them, which was so fun, but you’re riding the waves when Virginia would go on runs and then you’d be riding the waves with Maryland when they were going on their runs.

Looking back, I think it was a really even game in the way I announced it. Once the game started, I really was just enjoying the game and calling the game as it was going and flowing. Every game since then, I feel like I’ve been able to be just as critical of UVA as I would be of whoever the other team is.

Q. What do you think about when you look back on your UVA career?

A. I absolutely loved my four years. I feel like I learned so much and grew so much as a person. Certainly, the testament is true that sports is so much bigger than just the game itself. You take away life lessons.

I had a really unique four years because three of those years I played for Debbie Ryan, and then my fourth year Joanne Boyle was the head coach. Debbie had been the brand of UVA basketball for so many years. Whenever you think of UVA basketball, you think of Debbie Ryan. She was just a wealth of knowledge. We got to take away so much from our time with her.

At the same time, it was also special for me to be able to be there for the changing of the guard and establishing a relationship with Coach Boyle. There are challenges any time there’s a new coaching staff, but I love her as well. I have a great relationship with both of those coaches to this day. Q. Any particular games stick out?

A. We played Tennessee every year. My first year we were at Tennessee and Pat Summitt was the coach. Growing up, they were the pinnacle, and here I was as a first-year playing there. They had some players who are now in the WNBA and we ended up beating them on their home floor, which was just so crazy. I got a black eye that game and my dad had flown down from Pennsylvania. I remember Monica [Wright] single-handedly taking over that game. That was, for sure, one of the best memories.

Then my senior year they came to play us when it was unfortunately the final season for Pat Summitt, who had been diagnosed with early-onset Alzheimer’s disease. But she was still the coach. I don’t think the game was sold out, but the curtains [in the upper deck] had been pulled back because there were so many fans there. We ended up winning in overtime and that was also one of my favorite memories.

Q. Putting on your announcer’s hat for a second, what do you think of this year’s UVA team and how the Hoos stack up in the ACC? [UVA opens the season Tuesday night at home against Bucknell University.]

A. The loss of [center] Felicia Aiyeotan [who retired from basketball last month due to a medical diagnosis] is definitely devastating, but they played most of the year last year without her, so they’ve already adjusted.

I think it’s a young team where the freshmen are going to have a lot of opportunity and their core seniors – Jocelyn [Willoughby] and Lisa [Jablonowski] and Dominique [Toussaint] – are going to have to definitely play very well.

Louisville was picked [in the preseason poll] to win the conference and I know Virginia was picked in the bottom half, so it will be interesting. I do think a lot of schools lost a lot, especially [2019 NCAA runner-up] Notre Dame, which lost its entire starting five. So there might be an opportunity for some upsets.

Q. How did your overall UVA experience help shape you?

A. I’m so grateful for my experience. I loved basketball, but I also loved that it wasn’t all that I was. I loved that I was an athlete, but you also had social aspects, you also had your academics, you had your community and a lot of other things going on. Being a student-athlete was high priority and very time-consuming, no question, but I think the University and the athletics department do a really good job of having that balance.

I got a chance to play at the highest level athletically, but also received an extremely high-level education that I don’t know I necessarily would have been able to get otherwise. I have a deep appreciation for my student-athlete experience. It’s amazing what you get as a student-athlete at UVA. I absolutely loved every second of it.