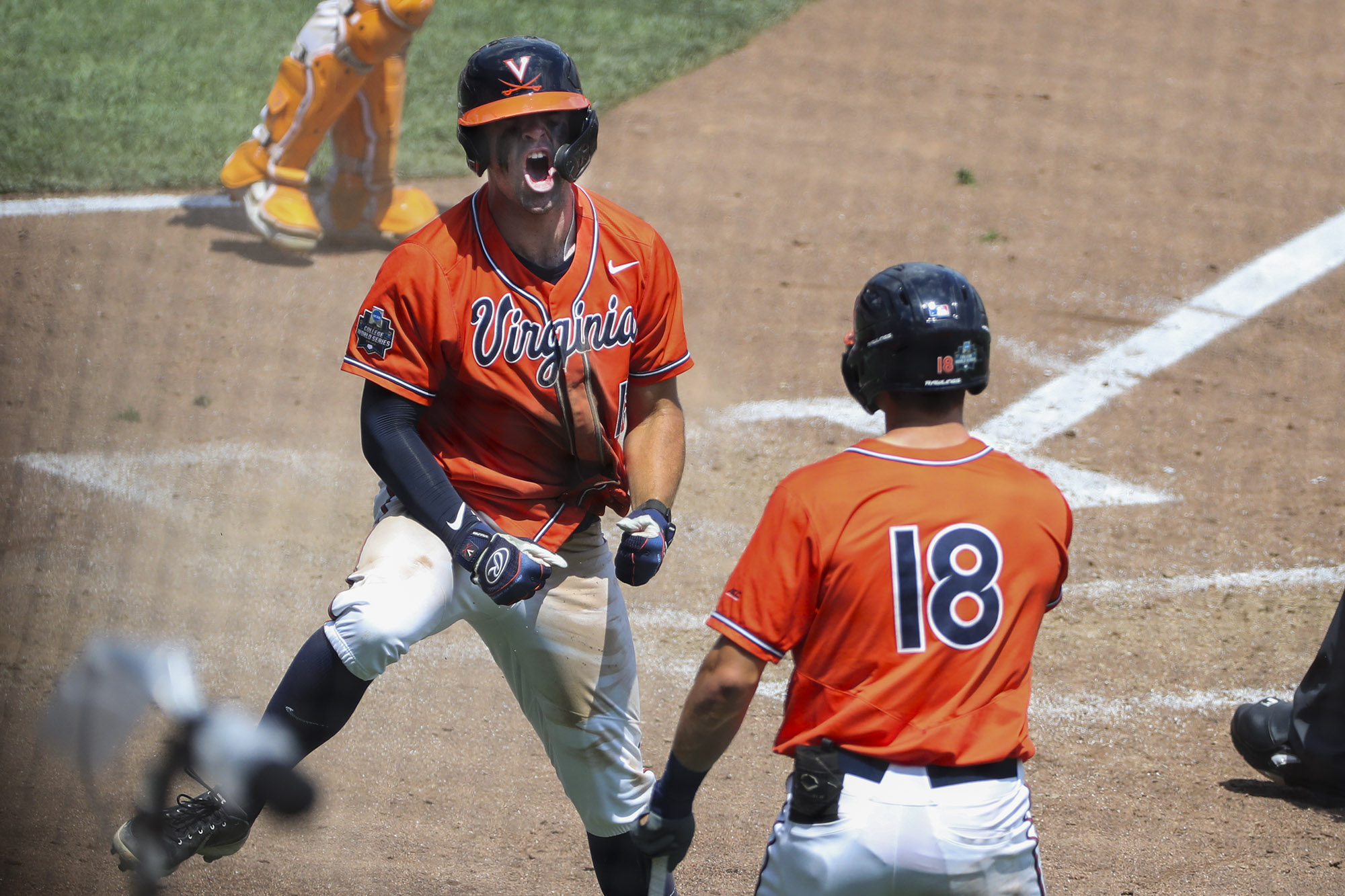 For their first College World Series game since 2015, the University of Virginia Cavaliers could hardly have scripted a more dominating performance than the one they delivered Sunday afternoon in Omaha, Nebraska.

UVA used only two pitchers – Andrew Abbott and Matt Wyatt – in a 6-0 victory over the No. 3 national seed University of Tennessee at TD Ameritrade Park. At the plate, the Wahoos banged out 13 hits, including a solo home run by catcher Logan Michaels that put them ahead to stay in the third inning. In the field, they committed no errors.

For Brian O’Connor, his 750th victory as UVA’s head coach was one to savor. His team played well “in every facet of the game,” O’Connor said. “We were prepared. They handled the moment very, very well. And I knew they would because of the situation that they’ve been in the last few weeks.”

This is a team that’s already survived six elimination games in this NCAA tournament, and the pressure of playing on this stage didn’t seem to faze the Hoos in their CWS opener. Abbott started slowly – Tennessee had runners on first and third with none out in the first inning – but then quickly settled down. The senior left-hander finished with 10 strikeouts, a UVA record for a College World Series game, and walked only two in six innings.

“The first inning was mainly just trying to get used to the fans,” Abbott said. “There’s 22,000 of them here. It’s something not every baseball player is used to, especially in college.”

The key, he added, was “just slowing the game down and executing pitches. I was rushing, my heart was beating a thousand beats per minute. I just had to slow down, catch my breath and go to work.”

O’Connor, who’s in his 18th season at UVA, is a College World Series veteran. He said he knows that “sometimes here in Omaha, that first inning can be a difficult inning for starting pitchers. And [Abbott] handled it like a champion, handled it like a winner. He continued to make pitches and was fortunate to get out of it.”

The Hoos are making their fifth appearance at the College World Series, which they won in 2015. This marks the fourth time UVA has opened with a victory in Omaha.

“Having coached in this event, played in this event enough, it’s really, really important [to be in the winners’ bracket],” O’Connor, “and once we move past this game, the next one will be even more important.” 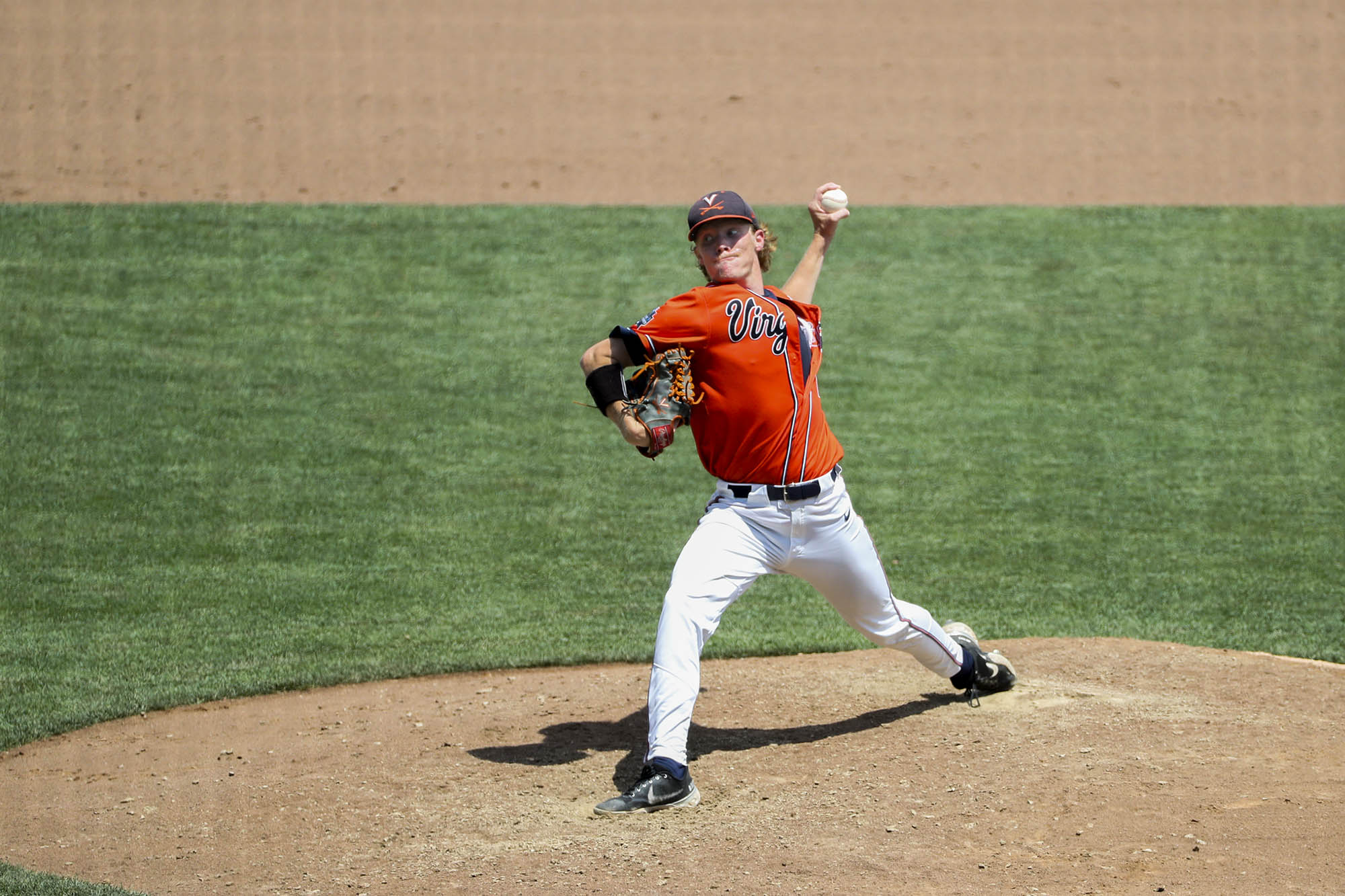 For the Volunteers, the loss was their first of this NCAA tournament.

“I thought there were moments whether at the plate or on the mound where we lacked conviction, and it cost us a little bit,” Tennessee head coach Tony Vitello said. “And towards the end of the game, when the score wasn’t the way we wanted, we uncharacteristically – ‘rolled over’ is not the right word, but we lost our edge a little bit, which has been so beneficial to us.”

The Cavaliers had no such problems. That this might be a special day for UVA became apparent in the third inning. It was the stuff of Hollywood. On Father’s Day, among those on hand to witness Michaels’ first home run of the season was his dad, Jeff Michaels, who was diagnosed with pancreatic cancer in 2018.

The ball was retrieved and eventually made its way in the stands to the elder Michaels, whose cancer is in remission.

"It means everything." @loganmich121 gets emotional reflecting on what it means to have his dad in the stands at the #CWS after surviving cancer pic.twitter.com/kClrj91Rff

When he saw the ball clear the fence in left field, Logan Michaels said after the game, “I started thinking about my dad, and it’s one of the most special moments we could share together.”

Back in the Cavaliers’ dugout, he buried his head in his hands for a few moments. “I got pretty emotional,” Michaels said. “For him to be here, [given] what he went through in the past, just for him to be here and be able to see that, I couldn’t have asked for anything more.”

Michaels, who came into the game batting .242, went 3-for-4 with two RBI against Tennessee. Behind the plate, he was his usual steady self.

“How about the day that Logan Michaels had?” O’Connor said. “I’m so proud of him.”

So were Michaels’ teammates.

“He’s been our anchor behind the plate for two seasons now,” Abbott said. “The guy just works really well with all the pitchers. He knows what the heck’s going on, and he’s one of those guys that steps up in big ways in different scenarios: blocking pitches, throwing a guy out in a big spot. 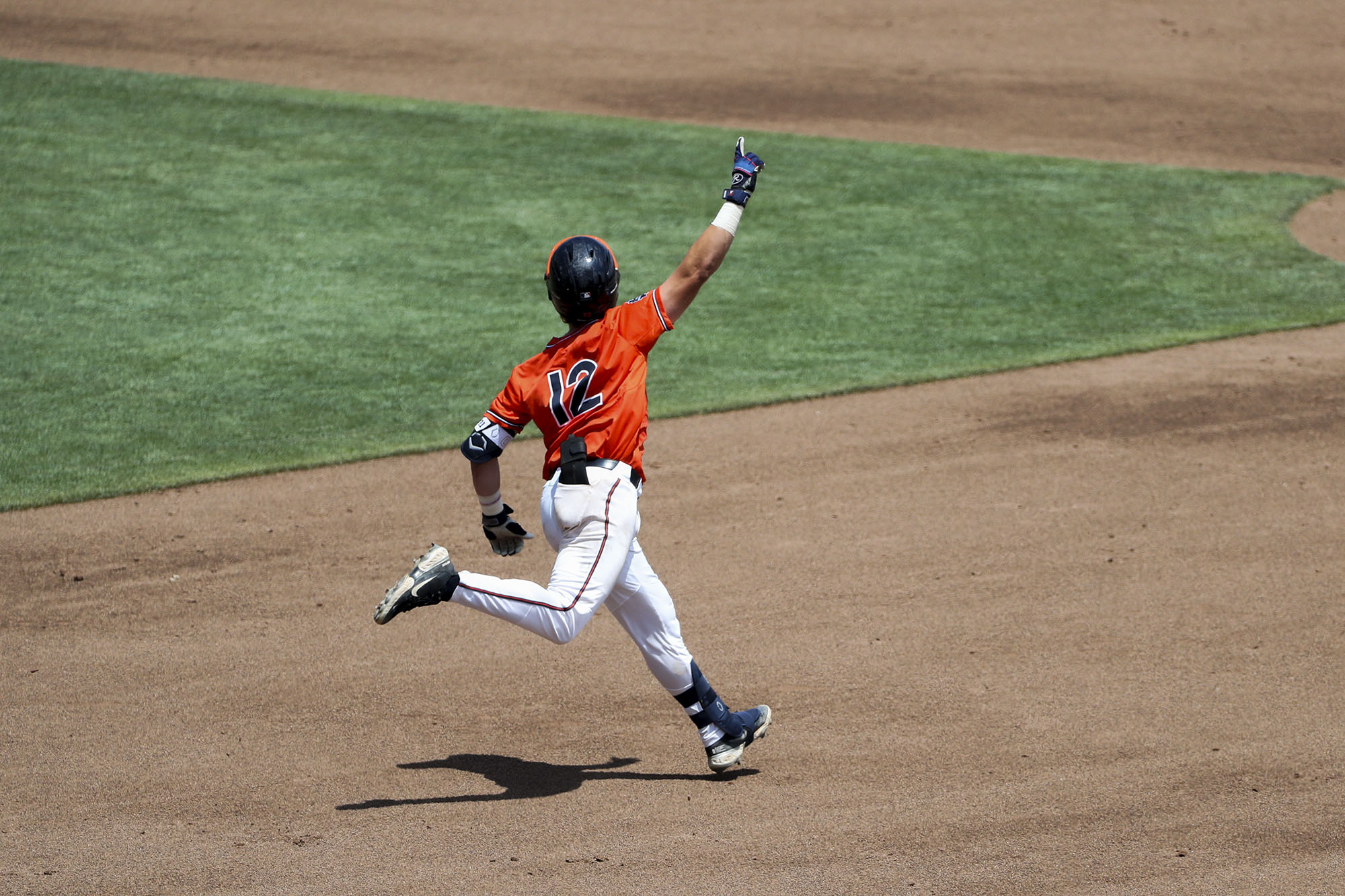 “Today, hitting the home run in front of his dad was special. And just being there doing what the team needs, that’s what this guy does, and when you do that, you get rewarded. … It’s time for the rewards to start coming for him.”

Through six innings, it was still a one-run game, and Tennessee starter Chad Dallas, like Abbott, was in fine form. In the top of the seventh, the Cavaliers broke the game open, stringing together four consecutive RBI singles. Michaels had the first one, and Chris Newell, Zack Gelof and Max Cotier followed.

“We had been taking some pretty good swings,” O’Connor said. “We had squared some balls up throughout the game. I felt like it was a matter of time before we were going to be able to capitalize on some of those opportunities. And then we just had some guys step up and get big, clutch hits.

“I tell the team all the time this is what this is about. You’ve got to enjoy the moment, and you have to have calmness and poise. But then it comes down to individual players emerging and getting that big hit, that big pitch or that big play. And that’s what they did.”

Gelof finished with three hits, and Cotier and Newell had two apiece. “From an offensive standpoint, it was a total collective effort,” O’Connor said. 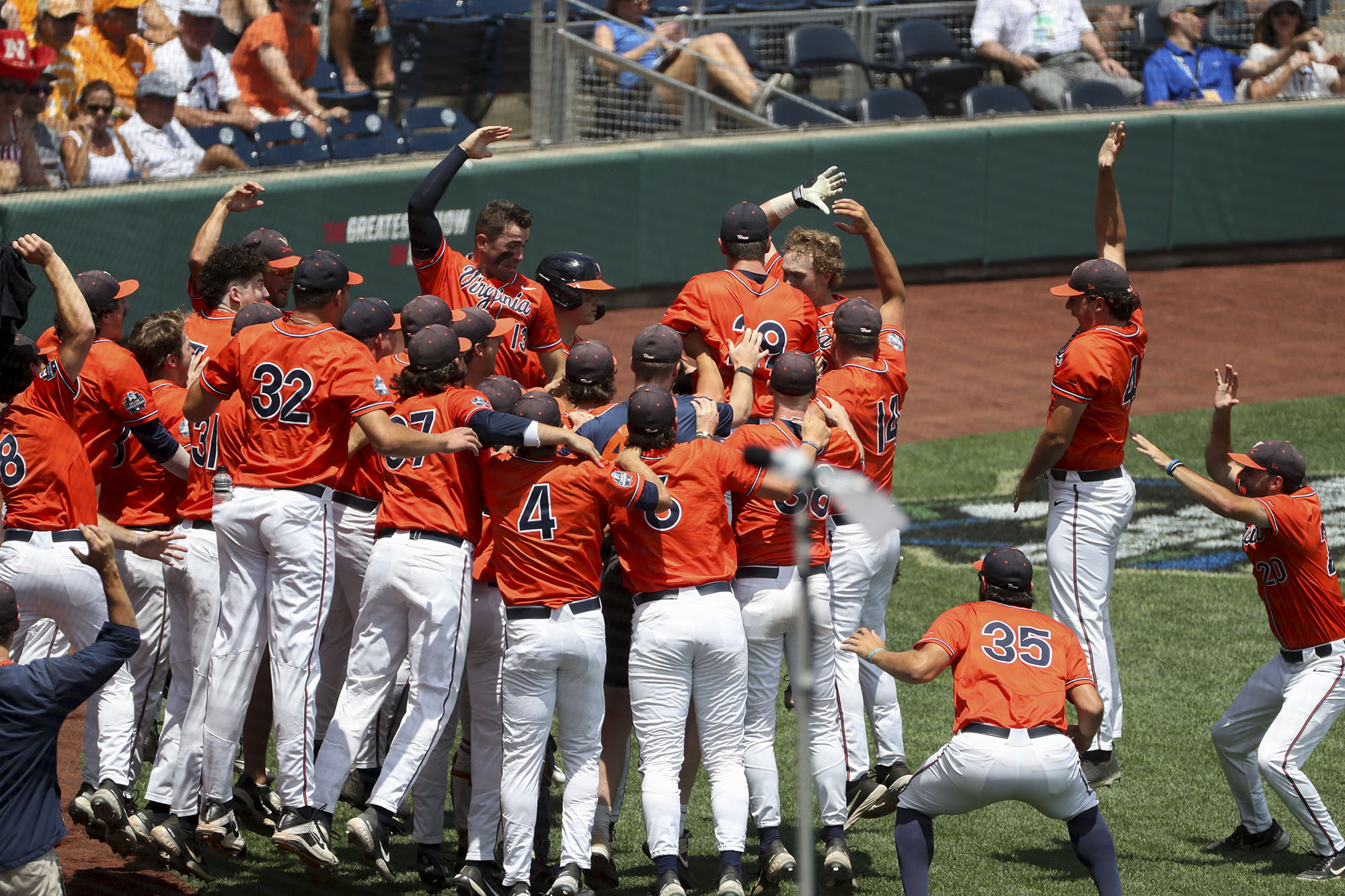 Cotier, who plays second base, and shortstop Nic Kent were among the Cavaliers who also sparkled in the field.

“If you’re going to win here in Omaha against these kind of teams, that infield defense has to be there,” O’Connor said. “It has to be great. And they were certainly fantastic today.”

The same was true of the Hoos’ pitching. “Andrew Abbott was terrific,” O’Connor said. “He made some big, key, clutch pitches with runners in scoring position [in] multiple innings. And that’s what your Friday night guy, your leader, your All-American needs to do to win here at Omaha. And he certainly delivered.”

Wyatt, a 6-4, 210-pound sophomore, shut down the Vols, too. He struck out three, walked one and gave up one hit in the final three innings.

“Matt’s been throwing some really great baseball for us and can be overpowering at times,” O’Connor said.

That the Cavaliers didn’t need to use a third pitcher Sunday positions them well for the week to come in Omaha. “I’ve been really, really excited about the depth of this pitching staff, the high-quality depth of it,” O’Connor said. “I feel we have some really elite arms, and many of them. So to only have had to use two of them certainly excites me.”

The College World Series started with two games Saturday night. None of UVA’s players had appeared in the NCAA tournament before this year, and so the Omaha experience is new to all of them.

Not so for O’Connor, associate head coach Kevin McMullan and assistant Matt Kirby. They were also here with UVA in 2009, 2011, 2014 and 2015, and they brought the team over to TD Ameritrade Park for the Vanderbilt-Arizona game Saturday night.

“They wanted us to come watch the Vandy game last night just to get a sense of the crowd and the ebbs and flows of the game here,” Abbott said.

As has been well-chronicled, the Cavaliers struggled for the first six weeks of the season and were 11-14 overall and 4-12 in the ACC after losing to Georgia Tech on April 1. That stretch now seems like a distant memory.

“We are absolutely playing the best baseball of our year,” O’Connor said.

“For us to be where we are right now, it’s so exciting,” Michaels said. “This is the most fun I’ve ever had playing baseball. This group of guys on this team, we fight to the end of it. We compete every day. We just love each other.”