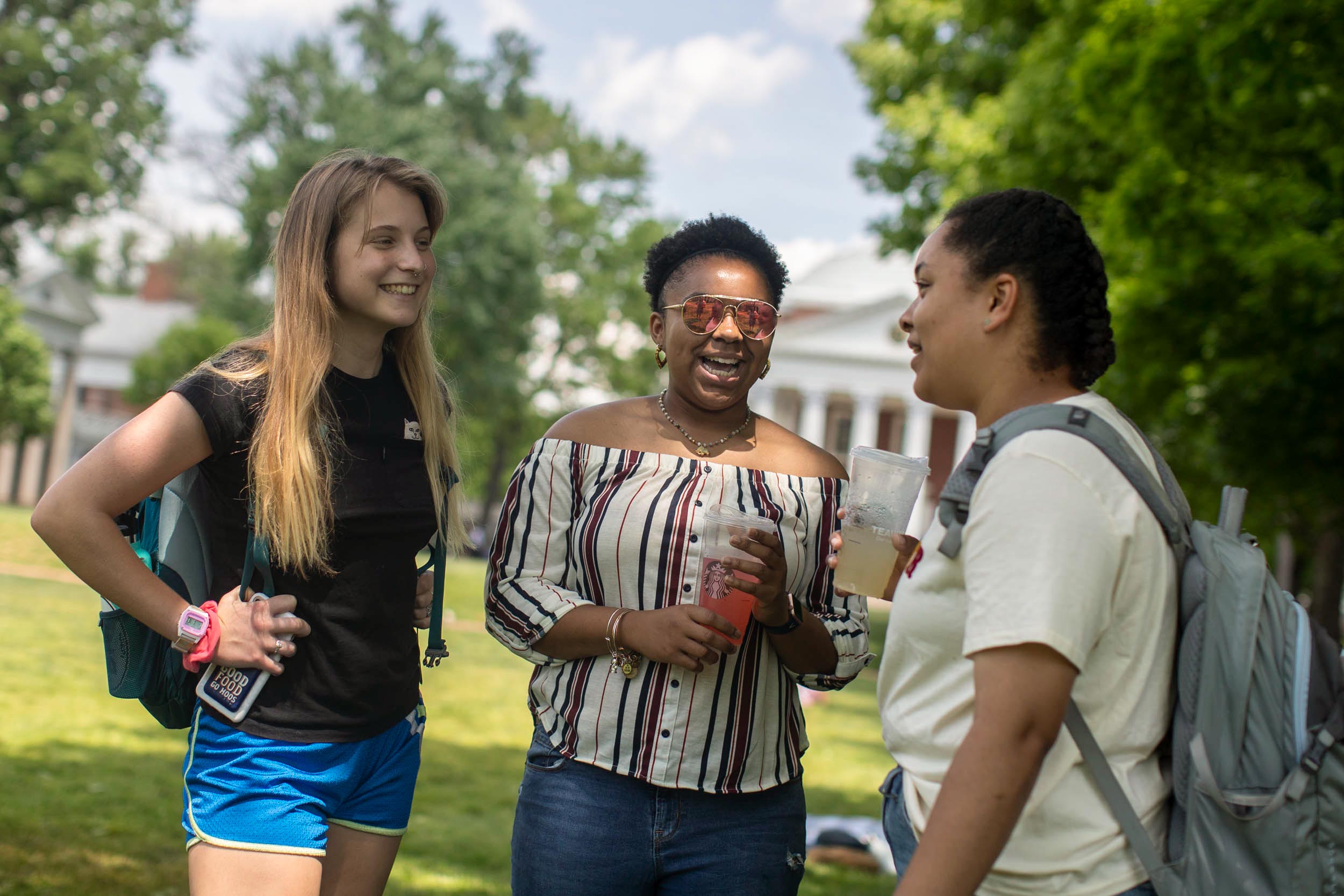 Back in 2014, things were really bad in Wilmington, Delaware. The FBI again ranked it the third-most-violent city among similarly sized urban areas in the country. Newsweek published an article, “Murder Town USA (aka Wilmington, Delaware),” imprinting a label the town has never managed to shake off.

This is important context as you read this story.

Alita Robinson, who just finished her first year at the University of Virginia, is from New Castle, Delaware, about five miles from Wilmington. She was just 14 years old at the height of Wilmington’s crime spike, enrolled at William Penn High School as a freshman.

While she and her family never personally experienced the violence, many in her circle did, and it created a haunting veil that was inescapable. “We were lucky, but I had friends who were affected,” she said.

An excellent student, Robinson was looking forward to going to college, but she had to forge that path largely on her own; her parents had not attended college. As far as she knew, her options were limited to the schools in her state: the University of Delaware, Delaware State University or a community college.

“I actually knew a UVA alum from my high school and I didn’t even think UVA was an option for me,” she said earlier this semester. That alumna was Robinson’s Advanced Placement Economics teacher, Adrienne Deakins, who graduated from the University in 2006 with a degree in psychology and minor in history.

“Alita is just a really awesome person,” Deakins wrote in an email. “She was a highly motivated, mature and future-oriented high school student who was great at creating opportunities for herself. 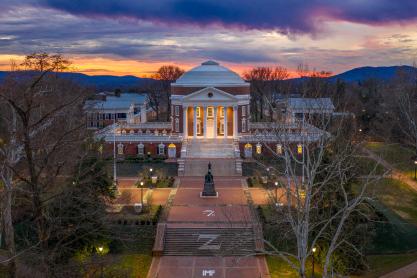 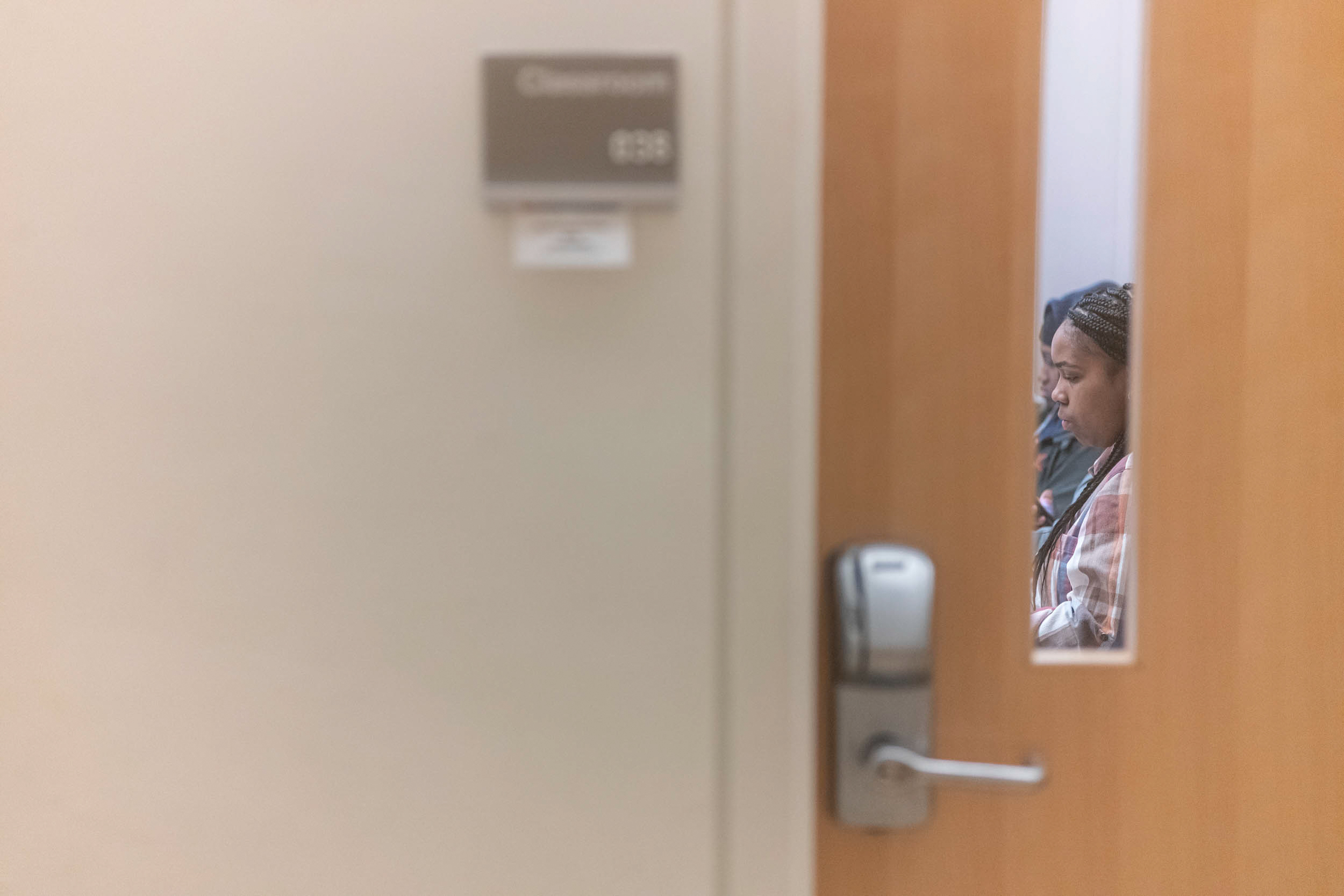 Robinson said the affection and regard are mutual. “She had a really big impact on me actually choosing to come here,” she said. “So, I applied early action and when I got in, I was so shocked. Like, I cried. It was a really rewarding experience. I was like, ‘OK, maybe I can come check the school out.’”

Robinson received a Blue Ridge Scholarship, created in 2014 by Board of Visitors member John Griffin, who wanted to make world-class education a reality for excellent students facing financial barriers.

When she was 12, Robinson traveled to San Diego for the National Chess Tournament with her Thomas Edison Charter School teammates, most of whom were African American. They returned home with the championship trophy.

This is the way she described the experience in her college essay:

If “Good Morning America” presented a story entitled, “Chess team wins the national chess title!,” people might assume that wealth and years of training had prepared them for that moment.

As a group of inner-city minorities, we lived through adversity and came from a city labeled “Murder Town, USA.” Yet, I knew that the talent my team possessed after two years of training made us special …

The word “conventional” is not in Robinson’s vocabulary.

Settling in at UVA

Robinson loves taking risks and the experience of meeting new people. Those qualities served her well as she and her mother, Gwendel, moved Robinson into Bonnycastle dorm in August. Still, her nerves were on edge. “We pulled down McCormick Road and I’m like, ‘Wow, I’m here,’” she said.

UVA “Greeters,” people familiar with the University, welcomed Robinson, her mother and all of the other first-year students who were moving in that day. Robinson and her mother were immediately put at ease. “I just remember a lot of smiling faces and a very inclusive environment,” Robinson said. “I was like, ‘OK, I feel OK now, and I can do this college thing.’”

There was another welcoming face that day: Robinson’s roommate, Macy Brandon of Lynchburg. Although familiar to one another through Instagram, Robinson and Brandon were meeting face-to-face for the first time. “I just love Macy so much and I feel like she has also helped my transition here,” Robinson said recently. “She’s my best friend.” 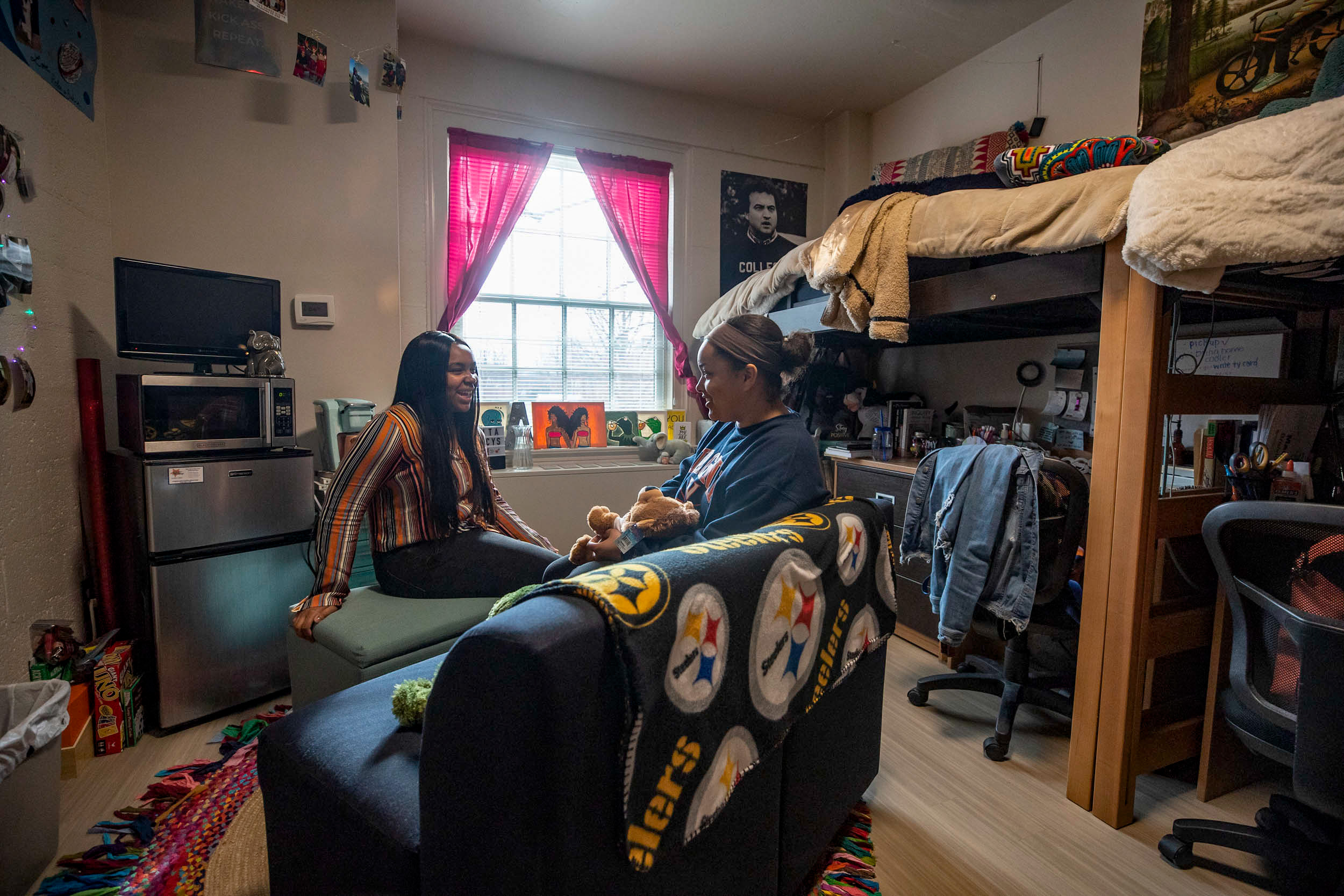 Robinson also began receiving a regular newsletter from “Hoo’s First,” an office at UVA that supports first-generation students. The email goes out to more than 1,500 students. “I always look forward to those because, definitely in the first couple of weeks, it was hard navigating everything,” Robinson said. “Back home, I was very involved in my community.”

The newsletter helped her learn about opportunities at UVA so she could create a new community in Charlottesville. Robinson has also taken advantage of the Peer Advising Program offered by UVA’s Office of African American Affairs. “The peer advisers check on us; we have lunch together, and you can talk with them about anything,” she said. “I feel like that’s really helpful, because it provides student networking, and it’s nice having someone else on campus you know who really has your back.”

Robinson has also leaned on her writing instructor, Patricia Sullivan. “I was struggling with choosing my courses for the second semester and she was really helpful,” she said.

Rugby and the ‘Ball-Carrier’

Robinson joined UVA’s women’s rugby club team last fall after learning about it from a friend who played. In rugby, as in American football, the term “ball-carrier” is reserved for the player who moves the ball forward. This moniker easily describes Robinson, who takes full command of her life and, as in chess, is always planning 10 steps ahead.

Although she’d never played before, she quickly became an integral part of the team. 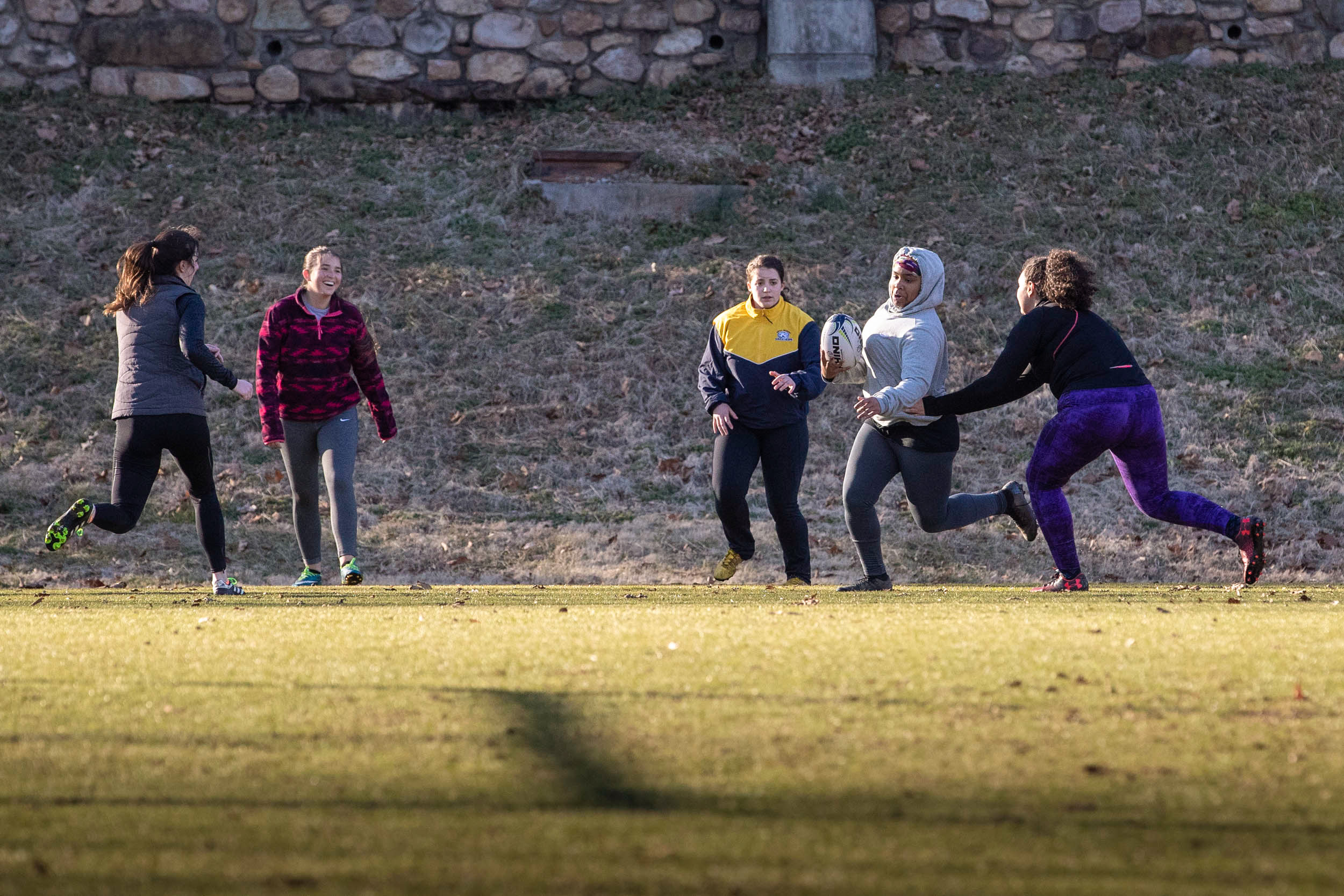 Robinson, second from right, said she is “hooked” on rugby and the team has become like family.

“She hits like a brick,” said Nancy Kechner, the rugby team’s head coach. “It makes the sound of someone getting hit with a bat. She smiles the whole time and plays with a lot of abandon.”

Kechner, speaking during a practice on a blustery March day in Madison Bowl, said the other players like being around Robinson. “She’s been a great addition to the team,” she said.

Each team member choses a quote that guides them through the fall and spring seasons. Robinson’s? “Success does not come to you; you go to it,” spoken by Marva Collins, an African American teacher who in 1975 created Chicago’s successful Westside Preparatory School because she was dissatisfied with the educational opportunities for poor black students.

Robinson said the women’s rugby team has become a home away from home for her. “You can walk on the field and know that you’ll have a family for the rest of your life,” she said.

That family traveled to Ireland for spring break this semester and played several matches around the country. “Ireland was ‘ah-mazing,’” Robinson said. The team visited Dublin, Galway and Cork. When not playing, they took in some of the 2019 Guinness Six Nations matches, which included men’s and women’s teams from Ireland, England, France, Italy, Scotland and Wales.

Robinson said she’ll never forget watching with the locals. “It was like their version of a Super Bowl, and the energy was incredible,” she said. Uprights, or rugby goals, were everywhere. “Being in a culture where your sport is dominant and being a female, I think that also meant something to me,” she said. “You think of the power the NFL and the NBA have in America and how those are male-dominated sports. The people in Ireland cheered just as hard for the women as men who are playing the same exact sport.”

These figures were taken from UVA’s 2018 census.

In addition to rugby, Robinson delved into another new world. Her first semester, she ventured to Madison House, the independent, nonprofit volunteer center for UVA students.

She was hoping to find something chess-related. When that didn’t pan out, she became intrigued by another volunteer opportunity called Rise Together, a UVA student-founded mentoring program that pairs UVA students with would-be, first-generation students at local schools. Robinson found her match and was soon traveling to Walton Middle School to share her college journey with younger students.

“When I found Rise Together, I felt like their initiative and just talking about my experiences and topics like bullying was important to [the students],” she said. “I thought it was a really great initiative that I was glad to be a part of.”

UVA was recently selected as a First Forward Institution by the National Association of Student Personnel Administrators for working hard to make UVA a community that opens its doors wide to first-generation students.

This spring, as the men’s basketball team was surging in March Madness, Robinson also applied and got into the Hoo Crew, the official student fan group at UVA. “I actually would have applied even if we had lost, because wherever I go, I always have school pride. I love sports and I love having that student pride. UVA has a lot of strengths. I won’t be surprised if that No. 2 public university goes up to No. 1 at some point.” 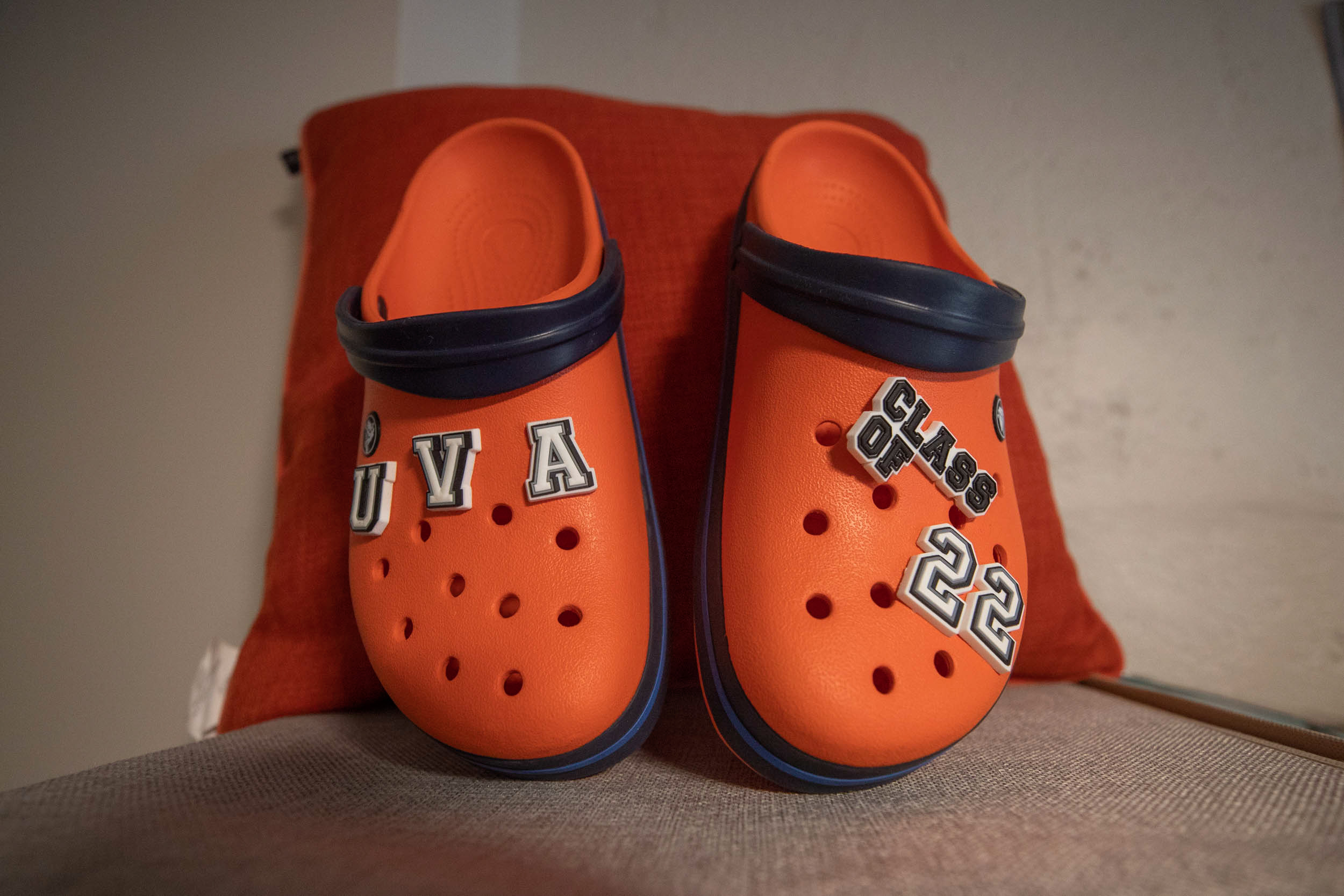 A dedicated member of the class of 2022, Robinson wants to go to law school after she graduates.

Robinson will carry that pride back home with her this summer. “I honestly cannot wait to go back home, because I’m going to go to my high school and make sure that students need to be applying to UVA,” she said. 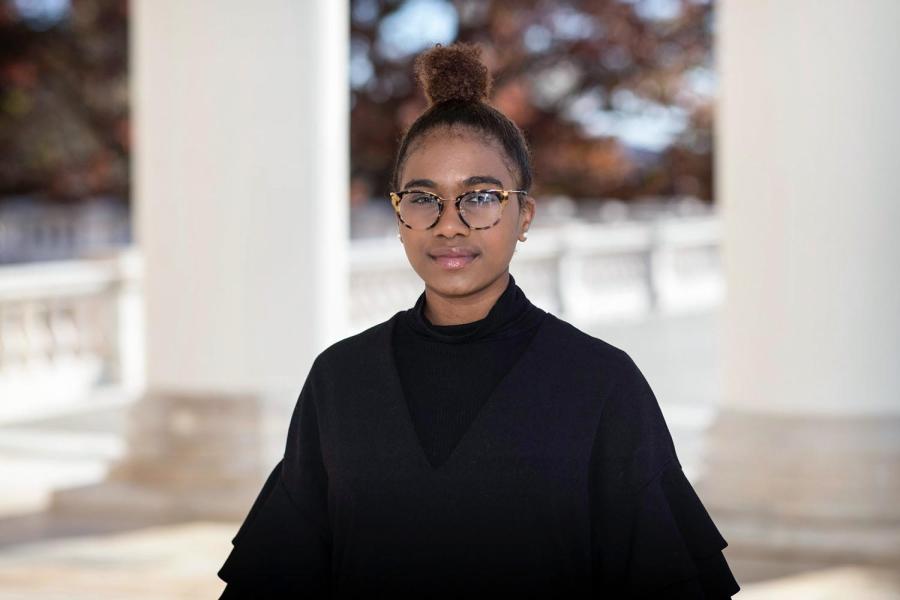 How to Thrive as a First-Generation Student at UVA 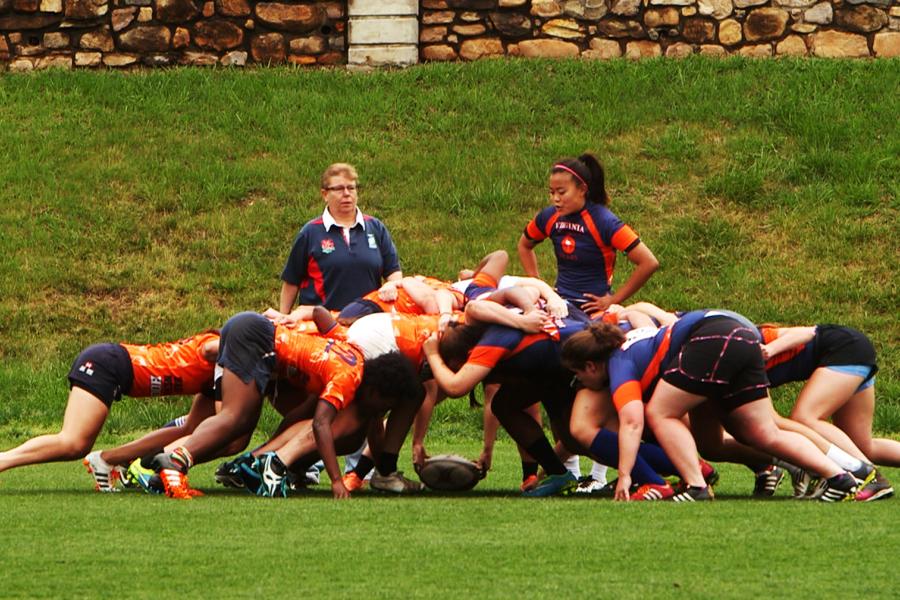 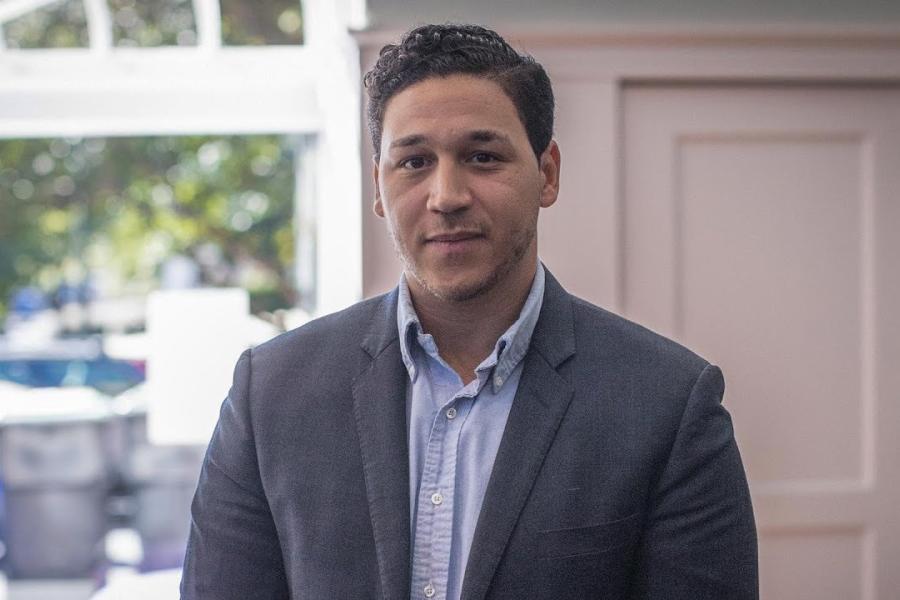